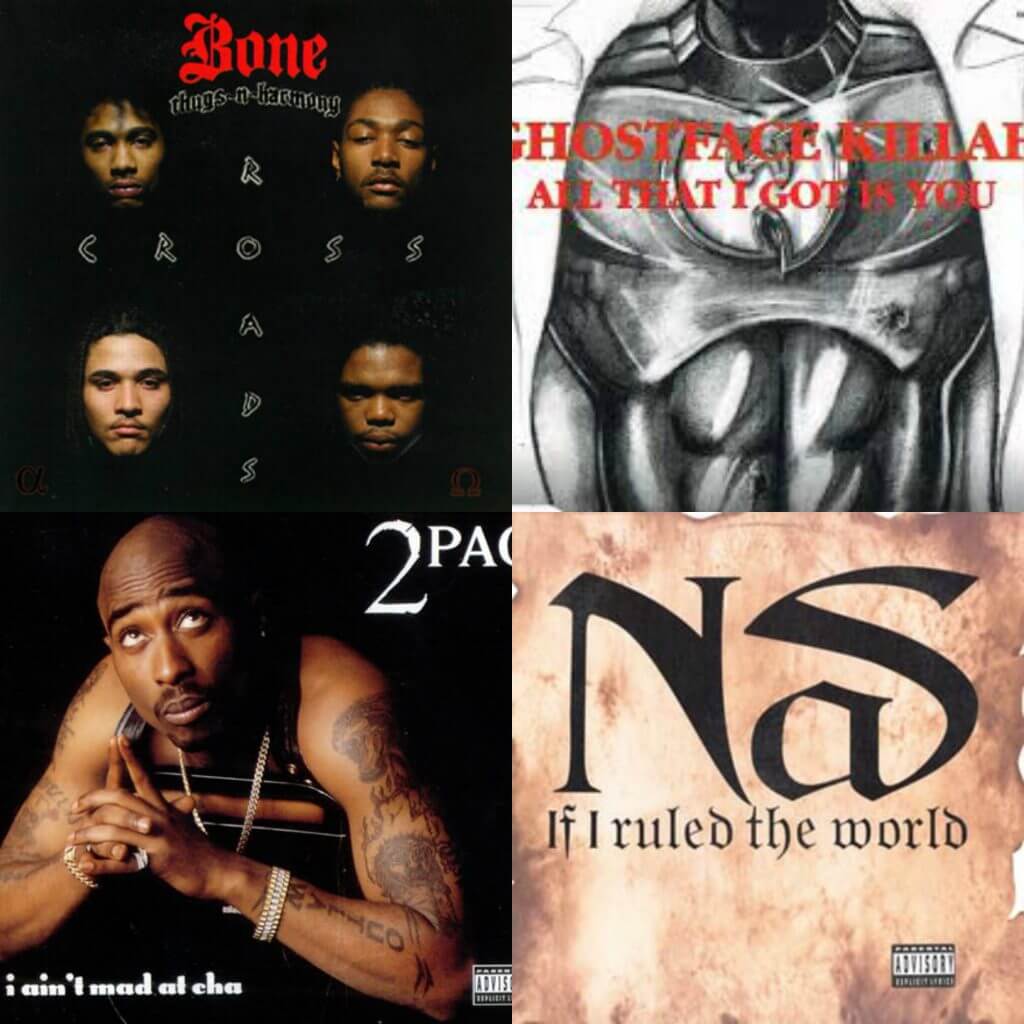 Top 40 Hip Hop Songs 1996: The final year of Hip Hop’s Golden Age? 1996 certainly was a year of endings, with the death of 2Pac, Hip Hop’s biggest icon. Biggie’s death would soon follow – and the void Pac and Big left would give room for Puffy’s shiny suit rap, and the mass-produced generic rap from the No Limit and Cash Money rap factories that would soon start flooding the market. But 1996 still was an excellent year for Hip Hop, arguably one of its best years ever. A lot of classic album releases, and the singles to go along with them. This is our top 40 Hip Hop songs of 1996. Agree? Disagree? Discuss!

Released as a single in 1996, and in this version not appearing on their album 1995 E. 1999 Eternal album, “Tha Crossroads” is the biggest selling single and Grammy-winning song by Bone Thugs-N-Harmony. This remake of the original “Crossroad” was done after the death of BTNH mentor Eazy E, which makes this timeless dedication to deceased loved ones all the more heartfelt.

2. Ghostface Killah - All That I Got Is You

In this heartbreakingly beautiful autobiographical song, Ghost tells the story of his impoverished childhood and the struggles growing up. He raps about how he grew up in a three-bedroom apartment without his father who left him at the age of six. Growing up poor he experienced hard living conditions like “pluckin’ roaches out the cereal box.” “All That I Got Is You” is an absolute Hip Hop classic.

The catchy piano-laced background melody perfectly enhances Pac’s emotional lyrics on one of his biggest hits, the last one under the name 2Pac (before switching to the Makaveli moniker). Ironically, the song was the first one to be released after his death and has 2Pac taking a trip down memory lane and making peace with some people from his past. The accompanying video has 2Pac being shot dead after leaving a hotel and entering heaven, to be received by legends as Marvin Gaye, Bob Marley, and Jimi Hendrix. Prophetic indeed.

One of Nas’ more radio-friendly songs. A great collaboration with Lauryn Hill and a brilliant recreation of Kurtis Blow’s old school classic, Nas paints a picture of how his version of utopia would look like.

De La Soul’s scathing attack on what they perceived as an ongoing decline in Hip Hop music and Hip Hop Culture. As relevant – if not more relevant – today as it was twenty years ago, this track turned out to be highly prophetic and stands as one of the staples of De La Soul’s discography.

An Organized Noize produced musical masterpiece from OutKast‘s monumental sophomore album ATLiens, with a butter-smooth bassline and both emcees’ lyrical genius on full display. Andre’s and Big Boi’s stutter-stop flows that don’t necessarily stick to the beat work perfectly, as they always do. The spacey, catchy hook ensures the mainstream appeal, but it still is Hip Hop to the core.

Taken from The Roots‘ classic third album Illadelph Halflife, this brilliant video (with its subtitles) shows a sense of humor perfectly matching the song’s message. Like De La Soul‘s 1993 “Ego Trippin’ Pt 2“, the song and the video sarcastically critique the ‘bling-bling’ cliches that already started dominating Hip Hop videos back in the mid-1990s. Classic material, with a message that is as relevant today as it was 20 years ago.

A great commercial as well as a critical success, The Score was a massive improvement on The Fugees‘ enjoyable but somewhat uneven Blunted On Reality debut album. The Score is a timeless and flawless masterpiece and “Ready Or Not” is but one of the many outstanding tracks on the album.

One of the most controversial Hip Hop songs ever? This trip through human history touches on religion, homosexuality, Afrocentrism, racism, government corruption and more – all in a stunning display of lyrical mastery by one of the most underrated emcees ever.

Produced by DJ Clark Kent, Jay-Z teams up with Notorious B.I.G. to deliver a classic track. One of the many excellent songs on Jay-Z’s debut album Reasonable Doubt.

The worldwide smash hit from Xzibit off his excellent – and underrated – debut album At The Speed Of Life. A timeless joint that gets radio play around the world to this day.

As dark as it gets, the title track of Mobb Deep’s Hell On Earth was written in a period when a number of people close to Prodigy and Havoc got killed/died. Mobb Deep music has always been dark and hardcore, this song is the epitome of that darkness and a fitting title track to an equally dark album.

This classic DJ Premier-produced cut is one of the big tracks on Nas‘ second album It Was Written. The song’s poetic lyrics are a first-person narrative from the perspective of a gun – one of the best songs in Hip Hop ever to make use of personification.

16. Jeru The Damaja - Ya Playin Yaself

In an era when consciousness in Hip Hop was on its way out in favor of tales of violence and materialism, Jeru kept doing his thing. Wrath Of The Math may not be quite the classic Jeru’s debut The Sun Rises In The East was, but it is an excellent album in its own right. Insightful and profound, Jeru is relentless in his condemnation of gangsta posturing and the pimping out of Hip Hop by the big money suits, a condemnation which turned out to be highly prophetic.

“Ya Playin Yaself” is one of the highlights of the album, with a message for gangsta posers and scantily-clad women over a dope DJ Premier beat.

One of Busta Rhymes‘ biggest hits, from his debut solo album The Coming. After his break-out performance on ATCQ’s “Scenario” in 1991, this track was a solid second step towards superstar status.

From the Space Jam Soundtrack, this star-studded cut was better and more popular than the movie it was made for. Dope verses from all involved and a great Hype Williams directed video too.

The beat, the lyrics, the hook, the vibe: perfection. The title track is just one of the many absolute gems from OutKast’s epic second album ATLiens.

Just one of the highlights from arguably The Roots best overall album (and that’s saying something!), Illadelph Halflife. Black Thought, Malik B & Dice Raw come out hard on this track, representing themselves and talking about wack MCs.

“Whateva Man” is the second single released off Redman‘s third and arguably best album, Muddy Waters. Produced by Erick Sermon, so you know the production is on point too.

One of the many contemplations 2Pac made of his life, this track – featuring The Outlawz – was the last single to be released from The Don Killuminati: The 7 Day Theory Makaveli album.

With its classic Nas sample, haunting beat, and superior display of lyricism this is one of the stand-outs off Jay-Z‘s overall excellent debut album.

It’s hard to do justice to the brilliance of Kool Keith‘s Dr. Octagonecologyst by selecting just one track. “Earth People” is typical Kool Keith/Dr. Octagon: a spaced-out beat and some trademark bizarre lyrics.

2Pac’s comeback single after his release from prison in 1995. Also his first single release as a part of Death Row Records. This collaboration with Dr. Dre is one of his biggest hits, partly because of the Mad Max-like video. California Love always was a hate-it-or-love-it kind of song for a lot of people, but there is no denying the timelessness of this track. Throw it up ya’ll, throw it up, throw it up!

No matter who the barbs in the song were directed at (2Pac? Biggie?) – this track has to be one of the most underappreciated in Nas’ vast body of work. Top-notch lyricism and wordplay. The instrumental is on point too, with a dope beat and brilliant use of a famous Sting guitar riff.

A Tribe Called Quest’s fourth album Beats, Rhymes & Life couldn’t quite match the masterpiece status of Tribe’s previous efforts, but there was still plenty to enjoy. 1nce again serves as a sequel to the 1991 classic Check The Rhime, with Tip and Phife once again bouncing their rhymes of each other over a wicked bassline, complemented by a smooth hook by Tammy Lucas.

Another amazing track from Ghostface Killah’s classic Ironman debut album, containing a nice intro and hook by The Force MD’s and dope cameos by Raekwon and Cappadonna, with one of his best verses to date – all over a brilliant, pulsating RZA beat.

It was The Infamous that made Mobb Deep’s name and established them as the hardest act to come out of New York at that time. Hell On Earth may be a little less lauded, but in fact, it’s just as good (and even darker). The production is flawless and lyrically it showcases some of Havoc’s and especially Prodigy’s best work. “Animal Instinct” is a  great way to kick off the album, a typically sinister Mobb Deep track, with one of the greatest piano-laced beats ever.

For this centerpiece of his third and final (EP) album, Lord Finesse recruited the help of lyrical heavyweights KRS-One and O.C. With that kind of line-up, how could it turn out any different than straight fire?

One of the lead tracks from Big Time, which is basically a Kool Keith solo album, with some help from rough Ultramagnetic affiliate Tim Dog. Kool Keith’s trademark weirdness (and ass-crack obsession) is in full effect on the album, bizarre lyrics galore. “The Industry Is Wack” is a more ‘normal’ type song – on which Kool Keith and Tim Dog give their opinion on the (Hip Hop) music industry and wack rappers. Raw.

Philadelphia‘s Bahamadia has to be one of the most underrated emcees in the Hip Hop game. She has a smooth and hypnotizing style of rapping, and lyrics worth listening to. In an era where Lil Kim-like ‘explicitness’ was the marketable thing, Bahamadia’s intelligent strength and female empowerment just wasn’t as easy to ‘sell’. That’s a shame because her debut Kollage is an excellent album, of which the DJ Premier-produced “3 The Hard Way” is one of the big tracks.

“Jazzy Belle” provides a brilliant soundscape, with some serious knowledge being dropped as well. One of the strongest tracks from ATLiens.

‘The World Is A Ghetto’ is one of Geto Boys’ more socially conscious songs. Together with ‘Still’ part of a strong opening salvo of the strong comeback album that was 1996’s The Resurrection.

One of the highlights of PRT’s fourth and last album. As always, PRT comes with provocative and thought-provoking lyrics – touching on sociopolitical subjects, the stupidity of gangsta rap, and much more. This track with guest emcee KRS One is typical PRT – clever and on point.

One of the best tracks of what arguably is Keith Murray‘s best album. Keith Murray is an exceptional lyricist and with Erick Sermon on the boards, the result is always going to be a banger. They both bring their A-game for Enigma. A bit darker sounding than his debut, Enigma is an awesome sophomore album and definitely an underrated one.

After two more than solid albums, UGK dropped Ridin’ Dirty – arguably their best album. Flawless production, dope rhymes, and superb flows – Pimp C & Bun B really bring their A-game on their third album. “One Day” is but one of the smoothed out bangers, as the whole album is dope from start to finish.

One of the many dope tracks of Redman‘s third – and arguably best – album Muddy Waters. Note the use of the classic beat from Just Ice’s “Cold Getting Dumb”.

39. The Roots - Concerto Of The Desperado

Black Thought kills it as usual on this track, casually attacking fake and wack emcees and showing the true essence of Hip Hop at the same time. Another flawless track from the monumental Illadelph Halflife album.

40. West Side Connection - Bow Down

Hard-edged, uncompromising gangsta rap over a banging beat, by some of the West Coast greats: WC, Mack 10 & Ice Cube.