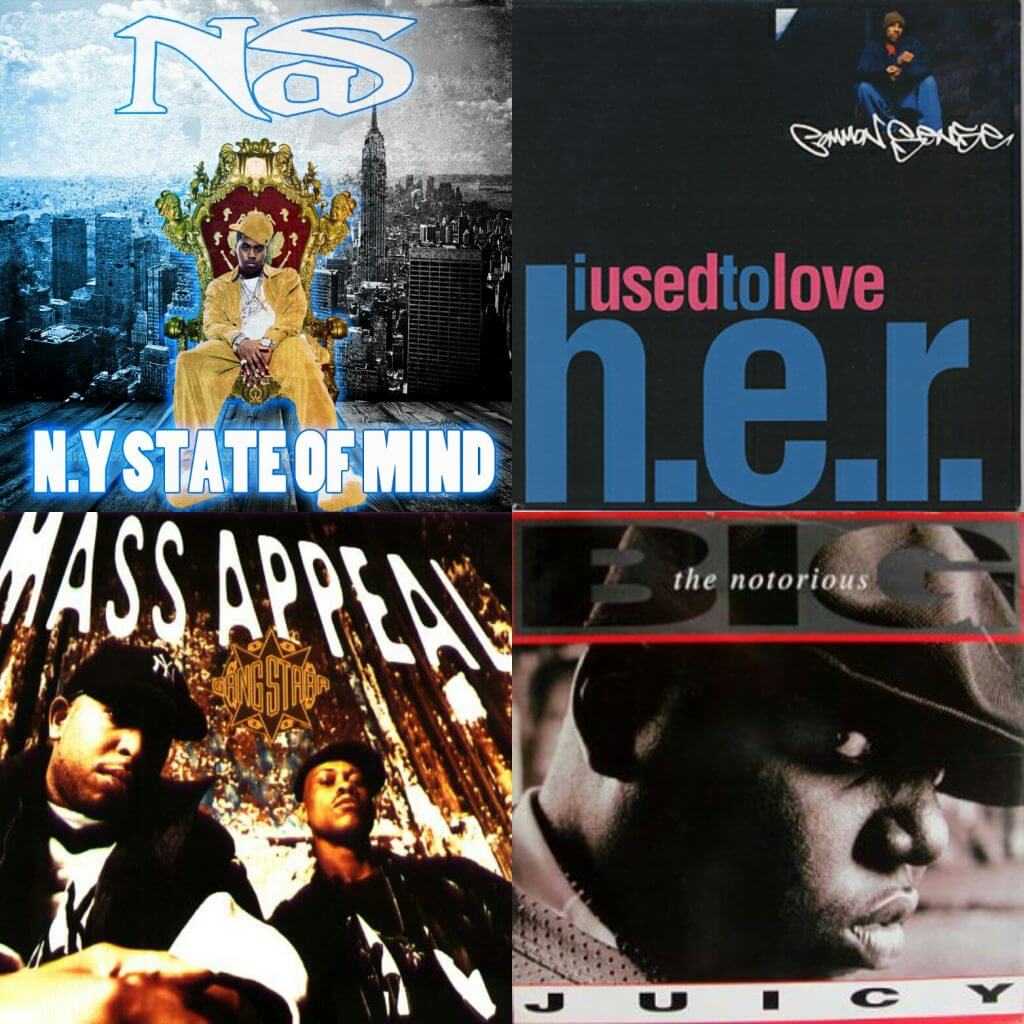 Top 40 Hip Hop Songs 1994: The greatest year in Hip Hop ever? It’s certainly up there with the best of them – with the start of the NYC Renaissance (after a few years of Dr. Dre initiated West Coast dominance) and the official rise to prominence of Southern Hip Hop. With classic album- and single-releases all across the board, 1994 will forever be celebrated as one of Hip Hop’s most important years. This is our top 40 Hip Hop songs of 1994. Are your favorites not included? Share your opinion in the comments!

The quintessential Nas track and one of Hip Hop’s best songs ever. A classic narrative of life on the NYC streets, this is one of the many classics Nas’ partnership with DJ Premier would yield and just arguably the biggest of them all.

Not just Common’s biggest song, but one of the biggest songs in Hip Hop, EVER. In this classic track, Common cleverly describes what appears to be his changing feelings for a girl, but what turns out to be his ever-evolving relationship with Hip Hop. Truly a landmark recording and the centerpiece of one of the best albums in one of Hip Hop’s best years.

The first single from Notorious B.I.G.‘s monumental debut album Ready To Die and an unbelievable critical and commercial success. This classic Biggie joint is an all-time classic not just because of its universal appeal, but because of its essentially positive vibe.

Gang Starr always came with that straight up, real hardcore Hip Hop. In this classic joint from their fourth album Hard To Earn, they address sell-out artists who are willing to compromise their sound and themselves for chart success. The quintessential Gang Starr track.

“Regulate” is the worldwide smash hit by Warren G and Nate Dogg. Released in the summer of 1994, the track appears on the soundtrack to the film Above the Rim and later Warren G.’s album Regulate…G Funk Era. One of those timeless tracks that still gets played today.

O.C.‘s Time’s Up from his underrated 1994 album Word…Life was a scathing accusation, pointed at studio-gangsters and thug-posturers who were flooding the Hip Hop scene at the time.

Over a classic beat provided by Pete Rock, who brilliantly interpolates the old school classic “Its Yours” by T La Rock, Nas drops three dope verses.

The Crooklyn Dodgers are a Hip Hop supergroup from Brooklyn, New York City, consisting of rotating members. The first group was composed of Buckshot, Masta Ace, and Special Ed. Their one and only record is this classic cut “Crooklyn,” produced by Q-Tip.

9. Keith Murray - The Most Beautifullest Thing In This World

That video. Simply brilliant and a perfect companion to this banging crossover track, probably one of the Beastie Boys’ most celebrated in a catalog full of classics.

One of Scarface’s most recognizable singles and the centerpiece of the all-around excellent The Diary. As deep and introspective as Scarface can be, this is a legendary track and one of Scarface’s very best.

“Bring the Pain” is the classic first single released from Method Man‘s debut album Tical, the first, hugely successful Wu-Tang solo project, by one of the clan’s most beloved members.

The third single from OutKast‘s debut Southernplayalisticadillacmuzik. This 7-minute track features Cee-Lo & Big Gipp of Goodie Mob, who rip it up with Andre & Big Boi on this mid-tempo masterpiece about doing something with your life. The beat, the message: a true testament to the power of Hip Hop.

The third track from Gravediggaz’s debut album 6 Feet Deep and the second single released from it. With a beat originally intended for the Wu-Tang Clan, this RZA masterpiece arguably is the signature track off that underrated classic album.

15. Thug Life - How Long Will They Mourn Me? ft Nate Dogg

“How Long Will They Mourn Me?” is one of the lead singles of 2Pac’s 1994 project Thug Life, and one of the many big 2pac tracks.

One of the most underrated Biggie songs; at least it is one of our personal favorites. This is a typical excellent lyrical narrative by Biggie, over a delicious instrumental crafted by Darnell Scott.

“D. Original” by Jeru the Damaja, is the second single (after “Come Clean”, which was released in 1993) from his debut studio album The Sun Rises in the East. Perfect beat by DJ Premier complemented by Jeru’s dope rhymes.

“Back in the Day” is a timeless track by forgotten West Coast rapper Ahmad. Released when Ahmad was only 18, the song is a nostalgic remembrance of childhood and young teenage years, from a somewhat jaded adult perspective. “Back in the Day” was Ahmad’s only major hit single, no doubt on the strength of its hook – a sample of the Teddy Pendergrass song “Love TKO”. “Back In The Day” sounds as fresh today as it in 1994.

For a while there, it looked like Craig Mack was going to be the next big thing. It didn’t happen for some reason, but this single from his debut album is an undisputed Hip Hop classic (as is the remix which features Notorious B.I.G., LL Cool J, Rampage, and Busta Rhymes.

The remix is one of the best remixes ever done. Biggie‘s verse is just sick, full of Quotables. Check the video if you can spot all the cameo’s, besides the inevitable Puffy.

“Take You There” is just one of the many stand-out tracks on Pete Rock & CL Smooth‘s second album, The Main Ingredient, the duo’s second consecutive masterful album.

The first single off Big L’s debut album (which would be released in 1995) is one of the most radio-friendly of his entire catalog – on request of the record label to promote the album – but it is dope as hell anyway. The catchy Kid Capri hook works and Big L shows off his trademark top-notch wordplay and impeccable flow.

“Front, Back, & Side To Side” is one of the many highlights of UGK‘s all-around excellent sophomore album Super Tight, one of this year’s classic albums from the South – along with Scarface’s The Diary and OutKast’s Southernplayalisticadillacmuzik.

23. The Roots - Distortion To Static

Black Thought and Malik B showing off their lyrical skills over a dope drumbeat. “Distortion To Static” is the first single and just one of the stand-outs from The Roots’ second album Do You Want More?!!!??!, which would be released in 1995.

24. Artifacts - Wrong Side Of Da Tracks

“Wrong Side Of Da Tracks” is a classic jam by Artifacts, from their underrated first album Between a Rock and a Hard Place.

This solo debut single by Wu-Tang Clan rapper Raekwon offered a tantalizing preview to his solo debut album Only Built 4 Cuban Linx…, which would be released in 1995 and which would turn out to be one of the best Hip Hop albums ever.

One of the most macked-out songs ever and one of Biggie’s biggest hits. Super classic club banger.

For his 3rd album (and second as/with Masta Ace Inc.) Sittin On Chrome. Masta Ace reinvented himself yet again, this time doing a West Coast flavored album. “Born To Roll is one of the best tracks of Sittin On Chrome – Masta Ace’s commercially most successful album.

This classic cut – much like the rest of Gang Starr’s fourth album Hard To Earn – is real, uncut, East Coast Hip Hop at its best.

Another Illmatic highlight which perfectly captures the essence of the young black males growing up with the prospect of violent death or being incarcerated looming over them. Nas kills it as usual with his verse, but it is guest AZ who steals this particular show with a killer verse of his own.

Hip Hop trivia: it’s Nas’ father Olu Dara who provides the trumpet solo at the end to finish off this classic joint.

Before his mainstream fame because of the 1995 Gangsta Paradise single, Coolio was an important member of WC’s MAAD Circle. With It Takes A Thief, he dropped a dope solo debut album after his MAAD circle period. “Fantastic Voyage” is one of the singles, with pop appeal, but dope as hell nonetheless.

Markedly darker, both sonically and lyrically, than their previous albums, Hard To Earn is yet another 5-star album from Gang Starr. DWYCK is one of the few lighthearted moments on the album. Another classic Gang Starr track.

“Afro Puffs” is the first single released by The Lady of Rage in 1994 from the Death Row labeled  Above the Rim: The Soundtrack. Still the best-known track from a sadly underrated emcee.

From Public Enemy‘s underappreciated fifth album Muse Sick-N-Hour Mess Age, (which admittedly was a bit too long for its own good and less inconsistent than their previous efforts, but still was a very good album) this track packs a strong message to ‘gangsta’ and sell out Hip Hop artists.

Produced by DJ Premier, so you know the instrumental is dope. One of the many stand-out tracks from Biggie’s super classic debut Ready To Die. Biggie Smalls Is The Illest.

Another Nas masterpiece. Excellent instrumental by Large Professor and loaded with samples, especially the brilliant looping of Michael Jackson’s “Human Nature” stands out. Filled with Quotables – Nas at his best.

“Funkafied” is the lead single from a historic album: the first album by a female emcee to sell over a million units.

In a year when DJ Premier dropped another excellent Gang Starr album with Hard To Earn, he reserved his best beats for Brooklyn emcee Jeru The Damaja. Jeru’s intellectual street flows combined with Premier’s best instrumentals result in a tight 10- song album with no filler tracks. “Ain’t The Devil Happy” is one of the very best songs on the album.

Organized Konfusion was responsible for three excellent albums in the 90s, and this is one of the best tracks of the best of the three albums. Prince Po and Pharoahe Monch show some unparalleled lyricism on this dark, dense, complicated, and intellectual album, on conceptually brilliant “Stray Bullet” they tell a story from a bullet’s perspective.

One of the best tracks from Digable Planets’ second album in two years (and unfortunately their last). Musically reminiscent of The Roots, this smart and seductive album is one of 1994 most creative and interesting releases. A timeless album, that sounds as fresh today as it did in 1994.

One of the highlights from Beatnuts’ first full-length album – an underappreciated NYC classic. This is one of those albums that have stood the test of time. The production is excellent throughout, and the braggadocious and humorous rhymes are catchy and creative. “Props over Here” is a perfect example of what the Beatnuts are all about.