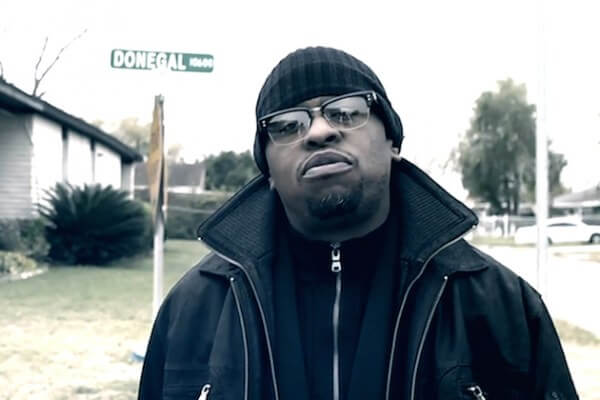 Scarface is one of the unsung icons of Hip Hop. A true pioneer, he was one of those responsible for putting Southern Hip Hop on the map. As part of the Geto Boys and especially as a solo artist, his three decades in the game left an indelible mark on Hip Hop, with a string of classic songs, albums, and guest appearances.

His history of depression, drug (ab)use and suicidal tendencies shines through on most of his recordings and gives his music a more authentic feel than that of most other artists. Make no mistake: Scarface is one of the best lyricists in the Hip Hop game, ever.

On this list, I’ll be ranking Scarface’s solo albums – excluding the Geto Boys albums and the compilation albums My Homies (an album that has its moments, but with Scarface only appearing on two of the thirty songs), Balls And My Word (very mediocre, consisting solely of unused cutting floor material) and My Homies Part 2 (a pretty bad album, released without Scarface’s knowledge or permission). His remaining nine solo efforts are all better – with at least two of his solo albums deserving of being labeled absolute classics.

What do you think about the order on this list? What is YOUR favorite Scarface album? Give your opinion in the comments! 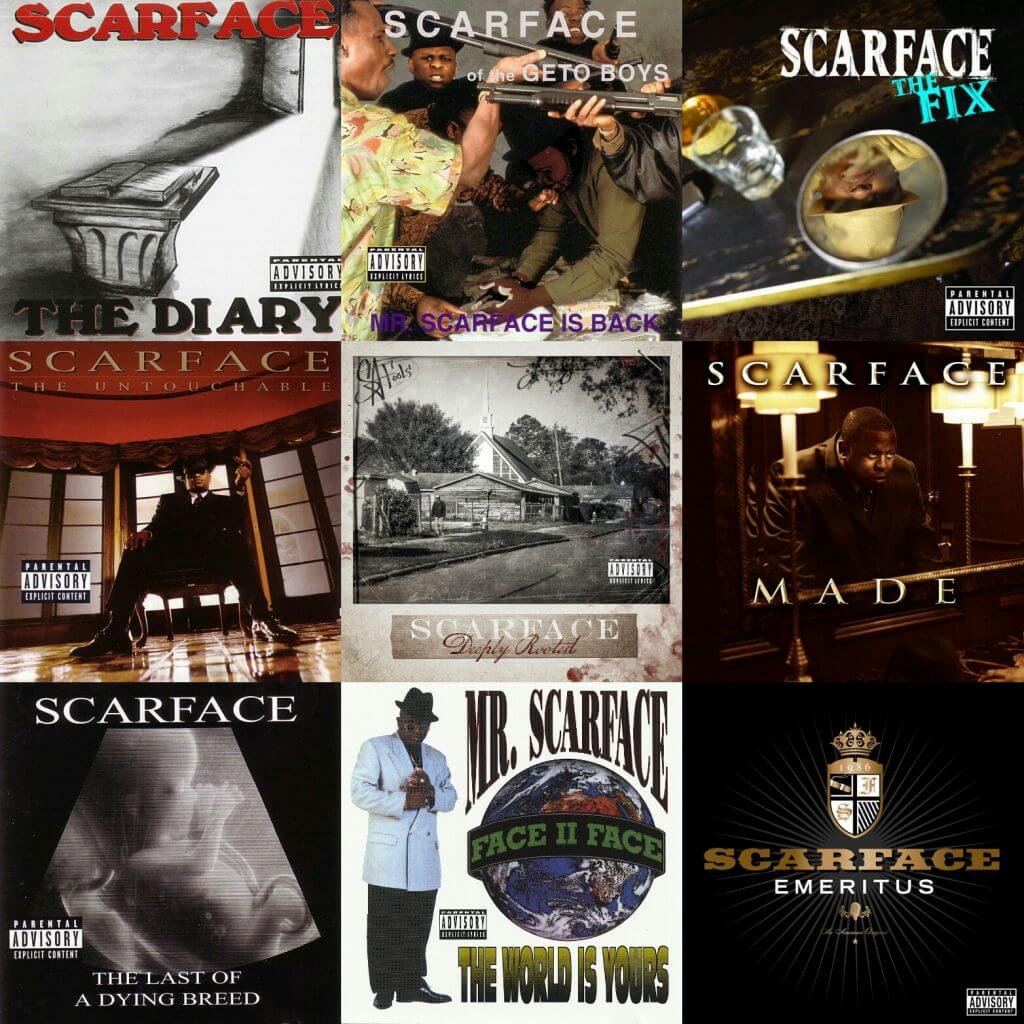 For me, this is the least of all of Scarface’s solo albums. Presented at the time as his retirement album, Emeritus feels a bit uninspired and forced. Emeritus doesn’t ‘flow’ smoothly because the production lacks in cohesion, the presence of too many guests doesn’t help, and there are no real stand out tracks (unusual for a Scarface album) and a few notable weaker ones (such as “High Note”). This album does have its moments, especially on the lyrical front, but overall it always left me kind of cold. What say you? 6.5/10 Scarface’s second solo outing is a solid enough album, but I always felt there was ‘something’ missing. The album doesn’t pack the punch his debut did and certainly doesn’t come close to its 1994 follow-up The Diary. There are a few excellent tracks, the epic “Now I Feel Ya” chief among them, but overall the album feels slightly less focused than its predecessor and its follow-up. Good, not great. 7/10 This album usually has opinions divided. Sure, it may be not one of Scarface’s best albums, but it is not as bad as some critics (and Scarface himself!) would have you believe. Not as good 1997’s The Untouchable, but I think it sure is better than its predecessor My Homies – shorter, tighter and with fewer guest spots. Production could have been better in places, but lyrically Face is on point as always. “Look Me In My Eyes” is a classic cut, and there’s plenty more to enjoy. Another good, if not great, Scarface album. 7/10 Scarface’s most underrated album? Even though it was critically and commercially successful, Made is rarely mentioned in discussions about Scarface’s best work. Maybe because we got used to Face dropping consistent quality?

Production on the whole album is dope, a bit darker than on its classic predecessor The Fix, and lyrically Scarface brings his A-game on most of the tracks (“Dollar” is one of the very few misses on this album). My personal favorite track on Made is “Never”, which has Scarface cleverly rhyming around a sample of the word never, but there are more great tracks to enjoy like “Burn”, “Who Do You Believe In” and especially “The Suicide Note”. 7.5/10 Seven years after his supposed-to-be retirement album Emeritus, Scarface comes back incredibly strong with Deeply Rooted. Where I always felt he lost some of his hunger and power on Emeritus, on this album Scarface is as strong as he ever was. More mature, reflective and spiritual this time around, Deeply Rooted turned out to be the album that perfectly matched Scarface’s status as one of the game’s top dogs. “Steer”, “God”, “All Bad” – no shortage of brilliant cuts on this one.

If this is his last album, he definitely ended his recording career on a high note, and in a better and more befitting way than if Emeritus would have been his last album. Deeply Rooted easily is one of 2015’s best releases and an album that is part of the better half of Scarface’s catalog. 8/10 Scarface‘s 1994 classic The Diary would always be a tough album to follow up on. With The Untouchable, his fourth solo album, Face does an admirable job and mostly succeeds.

Arguably the beats are bit weaker on this one than on The Diary, and the overall feel of the album is not as cohesive – but lyrically Scarface is as strong as ever, bringing his trademark street- and gangsta raps infused with authentic emotion and consciousness. Few rappers in the game – ever – are able to convey emotion as strongly and convincingly as Scarface is able to do. The album is also noteworthy because it contains one of 2Pac’s last guest appearances before he was killed, on the classic “Smile”.

Even if The Untouchable is not his very best effort, it is more than a solid part of his catalog and Scarface’s second platinum-selling album. 8/10 For many, this is Scarface’s best album and it’s easy to see why. Production is excellent – with some of the soundscapes provided by a young Kanye West in top form – and lyrically Scarface is at his best, deftly balancing his trademark street tales with conscious commentaries. “Guess Who’s Back” ft Jay-Z & Beanie Sigel, “In Between Us” ft Nas, “In Cold Blood”. “Safe”, “Keep Me Down” and of course the monumental “On My Block” are all unforgettable Scarface tracks.

Mature and confident, The Fix will always stand as one of Scarface’s top albums and one of the best albums of 2002. 8.5/10 A great start to an epic solo career. With the experience of a few Geto Boys albums under his belt (this one was actually recorded more or less simultaneously with Geto Boys’ classic We Can’t Be Stopped), Scarface hammered out this solid debut, much in the same vein as the material he did with the Geto Boys. Dark, brooding, hardcore: Mr. Scarface Is Back plays like a violent / horror movie – full of dark humor, provocative and macabre street-storytelling and violent fantasies, combined with Scarface’s real-life insecurities, depression, and suicidal tendencies.

The album is short and ‘sweet’ at twelve tracks, with no skits and no guests – exactly how I like it. Also, it contains my personal favorite Scarface song: the atmospheric “A Minute To Pray And A Second To Die”, featuring a brilliant interpolation of Marvin Gaye’s “Inner City Blues”, which perfectly adds to the potency of the lyrics. A great debut. 8.5/10 Raw and haunting, the cinematic The Diary arguably is Scarface‘s magnum opus and certainly my personal favorite from his overall outstanding discography.

The Diary – his third solo album – is short and tight (10 full songs) with only one guest (Ice Cube), which makes it all the stronger. “I Seen A Man Die”, “Hand Of The Dead Body”, “The White Sheet”, “No Tears”, “Goin’ Down”, “Mind Playin’ Tricks ’94” – all classic Scarface cuts, there is no filler material on this album.

The Diary is a staple for Southern Hip Hop and an undisputed Hip Hop classic. 9/10