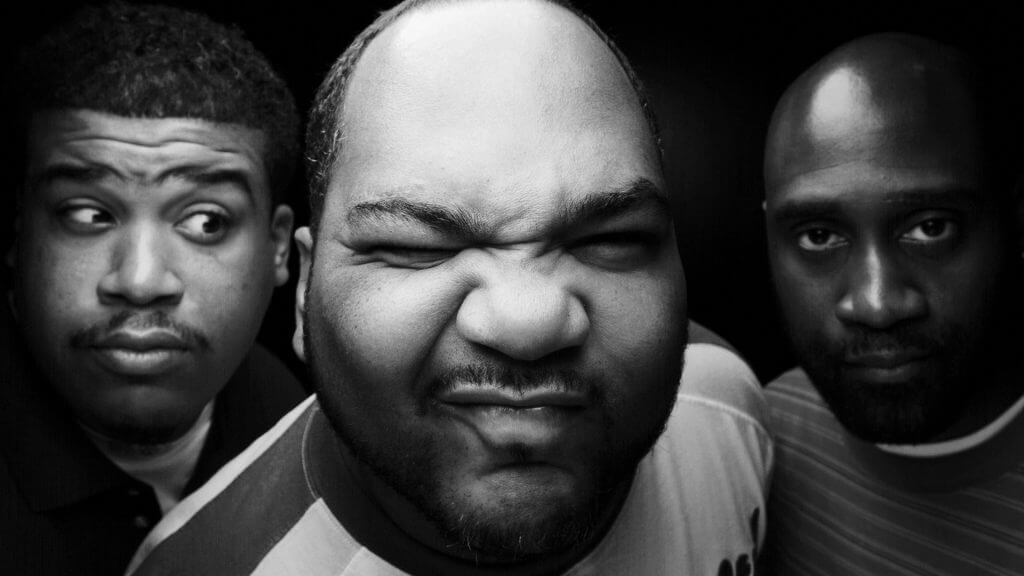 Ranking De La Soul’s Albums: There can never be enough praise for De La Soul. Their status in Hip Hop is virtually unparalleled – no other group (with the possible exception of Public Enemy and The Roots) can boast the same longevity, never wavering authenticity, and consistent A+ quality output. Ranking De La Soul’s albums is not an easy task, as the first four are all absolute Hip Hop classics and the rest is way above average too – there’s not a bad record or any real misstep in their whole catalog. With that said, let’s get into it! 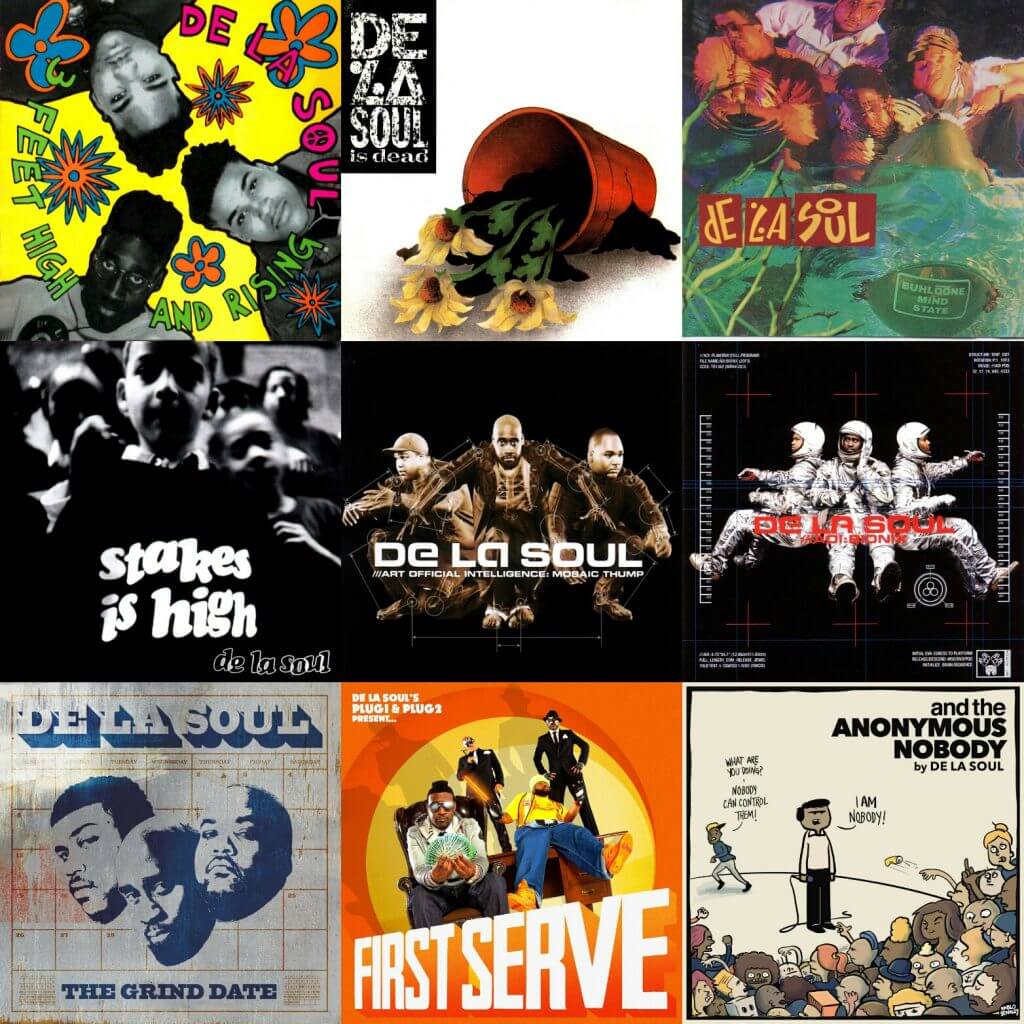 Technically not a De La Soul album (because officially Maseo was not involved) I decided to include it on this list anyway because in spirit it really is a De La Soul album, and two-thirds of the group being involved is enough for me.

On this concept album, Pos and Dave adopt the persona of “First Serve”, a Hip Hop band trying to make it in the music industry in the late 1990s. It details the rise, breakup, and reunion of First Serve.

Concept albums are always tricky to pull off and while there certainly are a bunch of better ones in Hip Hop (artists like Prince Paul, Masta Ace, Del and Kool Keith are renowned masters of that particular art), First Serve is easily up there with the better albums of 2012. Regrettably, the album went largely unnoticed, mainly because of lack of promotion.

First Serve is a dope album nevertheless and even if there are no real stand-out tracks and they overdid this time with the skits, the album showcases De La’s innovative style and dope lyrical skills as always. If you love the De La Soul’s other work and you somehow slept on this album, you could do worse than to go check this one out. 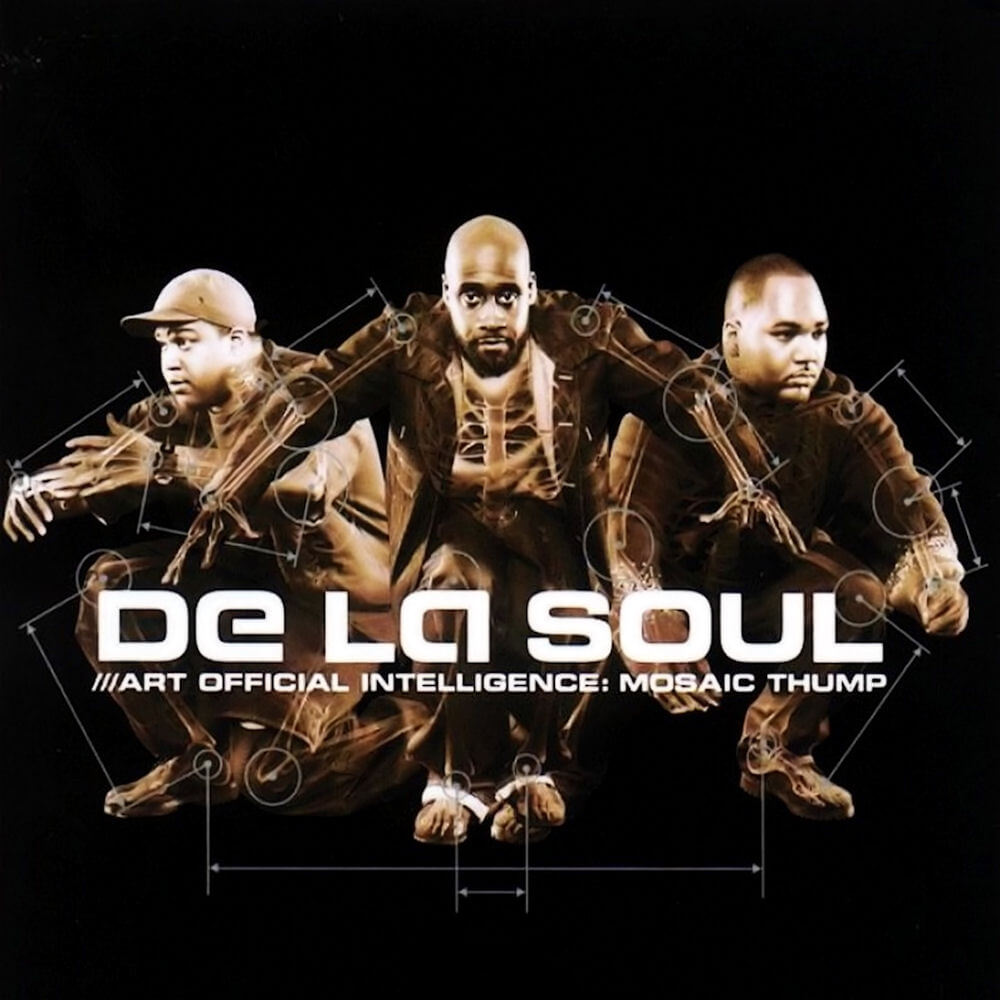 After 4 straight creative masterpieces (3ft High & Rising, De La Soul Is Dead, Buhloone Mindstate, and Stakes Is High), it was almost inevitable that De La Soul would one day release an album that is not an absolute classic.

Even though Art Official Intelligence: Mosaic Thump may not be their most memorable or greatest effort, it still is heads and shoulders above most other Hip Hop released at the turn of the century. Everybody knows the singles “Oooh” (with Redman) and “All Good” (with Chaka Khan), but for me the standout track here is “Set The Mood”, with a crazy beat and dope bars from Pos and guest emcee Indeed.

There are a few tracks and beats that do not really work, but overall AOI: Mosaic Thump is a good, if not great, De La Soul album. I always considered AOI: Bionix to be the most underappreciated album in De La Soul’s catalog. But even if it is somewhat better than AOI: Mosaic Thump (the first part of what was intended to be a trilogy), it is not perfect as De La’s first four were. Unlike on their first albums, the skits on this one distract a little, which takes away some enjoyment – but the majority of the songs hit the spot.

Some great and very clever tracks on here – “Baby Phat” and “Held Down” come to mind – some great guest spots (Slick Rick, B-Real and Cee-Lo Green in particular), and some great variety on the production side make this one another De La Soul keeper. 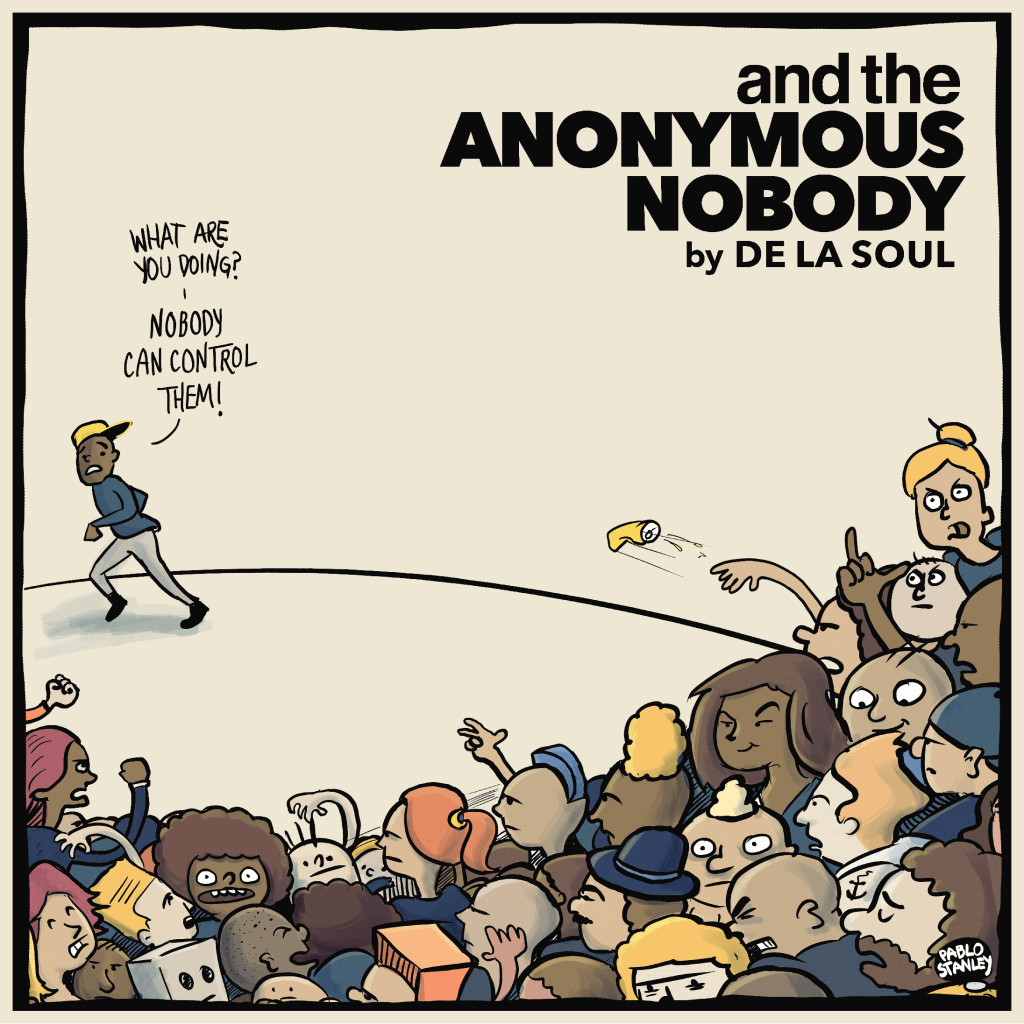 Twelve years after the excellent The Grind Date, and the Anonymous Nobody… seamlessly continues what De La Soul has always done: putting out quality music, this time pushing boundaries with genre-bending compositions and some very surprising guests.

If there’s a drawback it may be that there are a little too many guests on the album, and consequently not enough De La Soul. But that’s a minor quibble, as the guests mostly bring the goods to complement De La’s vibe, resulting in some unexpected and intriguing tracks.

Not for everybody, and the Anonymous Nobody… nevertheless is a more than solid piece of music, that may be a slow burn but without a doubt will be recognized as special album in the future. Everybody will recognize the fact that De La Soul dropped more than one classic album, but strangely enough De La’s 2004 release The Grind Date (their 7th album) is rarely mentioned when discussing their best records. It should be, though.

The Grind Date is tighter and leaner than other De La releases (no skits, which is something a lot of people can appreciate, I know I do) and it boasts production of Madlib, J Dilla, 9th Wonder, with guest spots of MF DOOM (with an epic verse on “Rock Co.Kane Flow”), Common, Ghostface Killah and others. If you somehow missed The Grind Date – now’s the time to check it out.

This is an outstanding album, and easily one of 2004’s best. Buhloone Mind State may just be the most underappreciated album of De La Soul’s first four. The reason for that probably is that it has less commercial appeal than the others (“It might blow-up but it won’t go ‘pop'”). Artistically it is every bit as strong, though – cohesive and consistent throughout – another artistic peak for both De La Soul and producer Prince Paul.

“Area”, “I Am I Be”, “Eyepatch”, “Breakadawn”, “Ego Trippin’ Pt 2” and more – there’s no shortage of super dope tracks on this one. De La Soul’s first four albums are all classics, this one is definitely up there with the others. 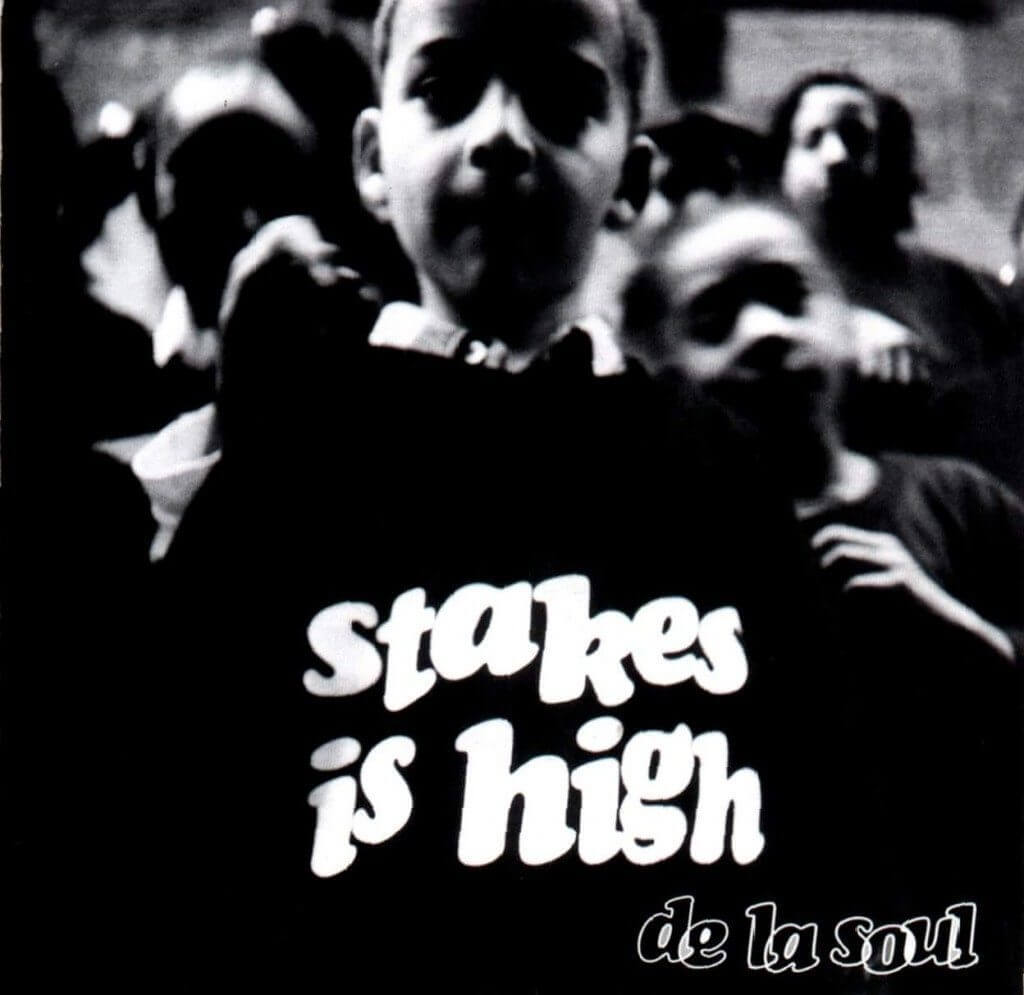 Yet another De La Soul masterpiece. All of their first four albums are classics in their own right, this one was their most mature and confident effort up till then. No gimmicks, no frills, just straight up Hip Hop.

“Big Brother Beat” with Mos Def, “The Bizness” with Common, “Supa Emcees” and the prophetic and important “Stakes Is High” title track are just four of the seventeen outstanding tracks on this album.

Almost a decade in the game at this point, De La Soul was still fresh and far from going stale. De La Soul Is Dead is a long album, but packed with brilliance, musically and lyrically. “A Roller Skating Jam Named ‘Saturdays'”, “Bitties In The BK Lounge”, “Afro Connections At A Hi 5”, “Keepin’ The Faith”, “My Brother’s A Basehead”, “Ring Ring Ring” and the monumental “Millie Pulled A Pistol On Santa”, the album is literally packed with awesome songs.

A marked change in style and feel to their equally brilliant debut 3 Feet High & Rising, De La Soul Is Dead showed a darker and more contemplative side of De La Soul. Gone is the happy-go-lucky positivity of their debut, instead we get De La’s disillusioned vision on the state of Hip Hop, which would turn out to be highly prophetic.

This album was so ahead of its time, Hip Hop still hasn’t caught up yet. 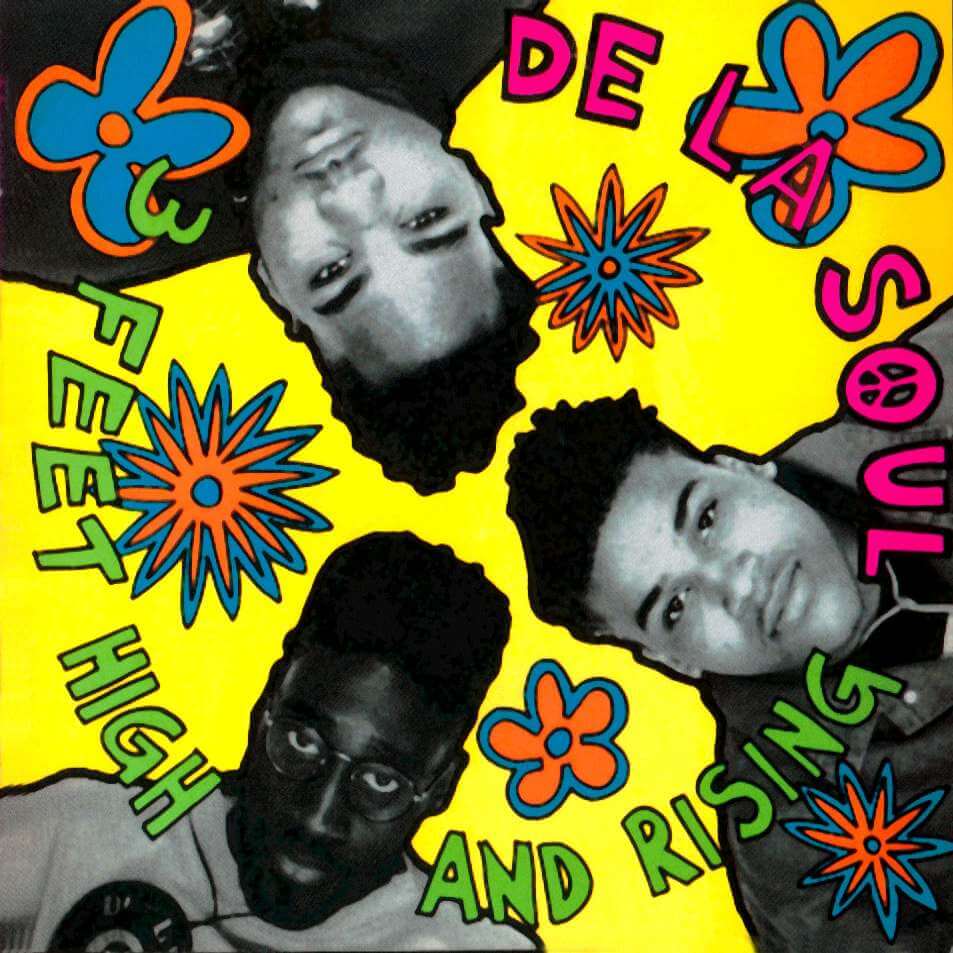 Innovative and hugely influential – this cooperation between De La Soul and producer Prince Paul is truly a landmark album in Hip Hop (and music in general).

This album introduced the skit to Hip Hop albums; and although skits more often irritate than add value, on this album they work. De La Soul more or less invented the rap-skit and they remain one of the very few acts who know how to use it (although on some of their later albums they misfired sometimes on the skits front). Where in 95% of the cases skits do not add anything, except annoying breaks in the flow of albums, De La actually knew how to use skits in the right way – to give a thematic and coherent feel to an album.

The whole album is consistent and all the songs are awesome – no filler tracks here. Clever wordplay, deft rhymes, playful production, positivity, and fun: 3 Feet High And Rising represented a new direction for Hip Hop, clearly a reaction to cliches already emerging in Hip Hop, even in its early years.

De La Soul’s debut is a must-have for anyone who loves Hip Hop and an all-time classic.