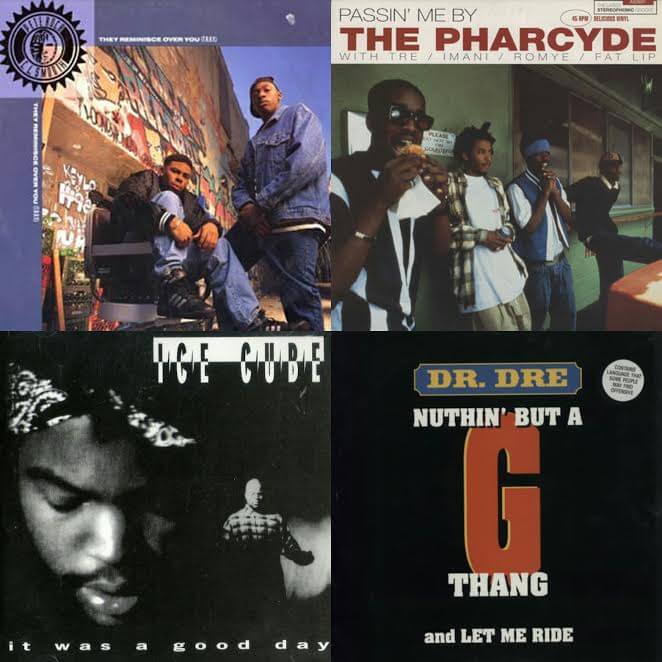 Top 40 Hip Hop Songs 1992: This was a good year. While 1992 saw the definite rise of West Coast Hip Hop to prominence, there was still plenty of excellent boom bap coming from the East. Also, more acts from the South started making their mark. Mainstream, gangsta, boom bap, alternative – there was something for everyone in 1992. These are our top 40 Hip Hop Songs of 1992. Are your personal favorites not included here? Share your opinions in the comments!

“They Reminisce Over You (T.R.O.Y.)” was inspired by the death of Pete Rock & CL Smooth’s close friend Troy Dixon (better known as “Trouble” T. Roy of Heavy D & the Boyz) in 1990. The song was the lead single off their monumental debut album Mecca And The Soul Brother and is now widely regarded as one of the best Hip Hop songs ever.

In a time when gangsta rap was starting to dominate West Coast Hip Hop, these guys didn’t feel the need for gangster posturing and weren’t afraid to show their funny & vulnerable sides. “Passin’ Me By” is one of the big tracks off their epic debut album Bizarre Ride II The Pharcyde and an undisputed Hip Hop classic.

This feel-good hood anthem is not just Ice Cube’s best song, but one of the best songs in Hip Hop, period.

A hugely influential  & timeless classic, this ‘G-Funk’ track and lead single off Dr. Dre’s seminal The Chronic ushered in a new era in Hip Hop. It established West Coast dominance in rap, and it was the breakthrough moment for Dr Dre’s young protégé Snoop Doggy Dogg.

Taken from the ‘Juice’ movie soundtrack and from Eric B & Rakim‘s fourth and final album Don’t Sweat The Technique, this track tells the story of a young thug trying to make it on the streets. Hard-hitting beats and lyrics – a perfect soundtrack to the movie starring a young Tupac Shakur.

In this song, Guru takes a stab at wack artists and former friends, recurring themes in his lyrics. One of the best tracks from Gang Starr’s third album Daily Operation, the album where Premo and Guru seemingly effortlessly continue the high standard they set with their groundbreaking sophomore album Step In The Arena.

“Let’s rock this joint in the old school way” That line perfectly describes this track, the first single off the Beastie Boys’ third album Check Your Head.

8. House Of Pain - Jump Around

THE ultimate party anthem in Hip Hop? This DJ Muggs-produced House Of Pain classic is certainly up there with the best of them.

Released on November 9, 1992 as the lead single for Digable Planets‘ 1993 debut album Reachin’ (A New Refutation of Time and Space), “Rebirth of Slick” was a critical and commercial success and even won the Grammy Award for Best Rap Performance by a Duo or Group at the 36th Grammy Awards. A great song from an underrated group.

“Typical American” is the lead track off The Goats’ debut album Tricks Of The Shade – a highly original concept album, ahead of its time. An underground classic by this forgotten Philadelphia alternative Hip Hop trio.

Bushwick Bill’s solo debut single from his solo debut album Little Big Man is a brutally honest and graphic account of the period in his life that led to the (self-inflicted) shooting which caused him to nearly die and which made him lose one of his eyes. (This aftermath of the shooting was immortalized through the album cover of  The Geto Boys‘ We Can’t Be Stopped, which shows Bushwick Bill being pushed through the hospital on a gurney the night he was shot.)

13. Boogie Down Productions - Duck Down

One of KRS One’s hardest tracks. Over a wicked drum beat, KRS delivers another clear message to sucker emcees about who exactly holds the crown in Hip Hop.

Fu-Schnickens were a typical early 90s group who followed the Tung Twista / Das EFX style of rapping. Their debut album F.U. Don’t Take It Personal was a fun and perfectly enjoyable album, even if one excellent emcee (Chip Fu) and a number of stand-out tracks are not quite enough to compensate for the two mediocre emcees and a few filler tracks. “La Schmoove” is a timeless party classic however, with a dope guest spot from Tribe’s Phife Dawg.

“If it ain’t broke then don’t try to fix it”. Never was this saying more applicable than to Too Short and his formula. By 1992, he’d be in the game making music for ten years already – Shorty The Pimp being his fourth studio album. We knew what to expect by then and that’s what we got: Too Short’s (x-rated) stories over bumping beats. One of his best albums with “In The Trunk” being one of the (non-explicit) highlights.

This song is HARD, just like the album with the same title it comes from. Hard beats and controversial, hard-ass lyrics that may be difficult to digest for some. But that’s just the intention, isn’t it? Da Lench Mob is an Ice Cube project and it shows. It bears a lot of similarities (sonically and content-wise) with Cube’s previous year classic Death Certificate – the same anger and hunger can be felt here.

Seattle-legend Sir-Mix-A-Lot’s worldwide smash hit from his third album Mack Daddy was a highly controversial track at the time of its original release, because of its outspoken and blatantly sexual lyrics about women, as well as specific references to the female backside. The video was briefly banned by MTV, which only helped the song reach mega-hit status.

“People Everyday” is the biggest hit of Arrested Development, a group founded in Atlanta in 1988 as a positive, Afrocentric alternative to the gangsta rap popular in the early 1990s. “People Everyday” was the second single from their debut album 3 Years, 5 Months & 2 Days in the Life Of…. – which stood in stark contrast to the gangsta rap that started to rule the charts in 1992 in its focus on spirituality, peace, and love.

Guru’s lyrics are thoughtful and deep, and the track is made even more poignant by DJ Premier’s brilliant musical backdrop.

This track was and still is HARD – you can’t front on that.

A dope posse cut from MC Serch‘ underrated debut solo album Return Of The Product, with the second pre-Illmatic guest appearance of a young Nasir Jones.

22. Geto Boys - Damn It Feels Good To Be A Gangsta

This track first appeared as an extra track on the 1992 greatest hits compilation Uncut Dope, and it became one of the Geto Boys’ most famous songs when it was featured in the 1999 ‘Office Space’ movie. Funny last verse by guest rapper J-Prince, who impersonates the President of the US: “Cuz now I got the world swingin’ from my nuts… And damn it feels good to be a gangsta”

One of EPMD‘s biggest hits, this energetic track gives us guest spots from fellow Hit Squad members K-Solo and Redman. Especially rising star Redman steals the show here with an epic verse (which he himself rated one of his top 20 verses off all time).

If you’re not into to ‘riggedy-diggedy’ tongue-twisting lyrical style these guys developed, this act – and all Das EFX style clones that would follow – can be somewhat tiring and annoying. If you DO enjoy it however, this song (and the rest of their debut album Dead Serious) is a banger.

This track shows us Rakim at his hardest. It’s an unapologetic warning to all emcees who dare step to him – they will get punished. Filled with metaphors, similes, and vivid imagery, this is Rakim at his bragging best.

The second hit single from Ice Cube’s third album The Predator, has Das EFX bring their own unique flavor to a track that uses the classic instrumental of Grandmaster Flash‘s The Message.

Diamond D’s debut album Stunts, Blunts & Hip Hop is an excellent piece of early 90s NYC Hip Hop. Diamond D always was a producer first and an emcee second and it shows. The beats on the whole album are flawless from start to finish, “Best Kept Secret” is just one of the many stand-outs.

28. The Disposable Heroes Of Hiphoprisy - Language Of Violence

Although not strictly a Hip Hop act, this track from the duo’s (Spearhead’s Michael Franti and Rono Tse) experimental debut album Hypocrisy Is the Greatest Luxury is included in this list nonetheless because it has that ‘Hip Hop feel’. A poignant cautionary tale about homophobia and bullying.

The quintessential Lord Finesse track, from Return Of The Funky Man, Finesse’s second album. As ever Lord Finesse delivers ill rhymes over a dope beat, crafted by D.I.T.C. producer Show(biz).

This cinematic gangster tale really signifies Kool G Rap‘s transformation from a battle emcee to a mafioso gangsta rapper. No matter the subject matter though, G Rap is an emcee second to none.

“Let Me Ride” is the third single released from Dr. Dre’s monumental The Chronic. Strangely enough not a big hit at the time, but a massive hit later when Dre won a Grammy Award for Best Rap Solo Performance for the song during the Grammy Awards of 1994.

Commercial as hell, this infectious mainstream track by two youngsters from Atlanta was a worldwide hit, and the second biggest-selling Hip Hop single in 1992 (third overall) after Sir-Mix-A-Lot’s “Baby Got Back”.

Just another little reminder from Rakim who’s no. 1. In an uncharacteristically jazzy track, Rakim yet again rhymes about rapping and lays down the law for any emcee out there trying to compete.

Just one of the many excellent tracks off The Pharcyde‘s brilliant debut album. You just can’t help but crack a smile every time you hear these ‘mama jokes’ lyrics.

Showbiz & AG‘s debut is a flawless album: top-notch production from Showbiz (and Diamond D) and guest appearances from Lord Finesse and Big L (among others) – this is the best DITC album in a series of excellent albums. Amazingly consistent and entertaining throughout – “Represent” is just one of the highlights, with dope verses especially from Big L and DeShawn.

“Days Of Old” is one of the lead tracks of another excellent Paris album, after his equally impressive debut The Devil Made Me Do It. It’s a mystery why Paris never blew up like Ice Cube and Public Enemy did – he does the same and he does it just as well. Intelligent, militant, powerful – Paris has dropped some classic material in his career.

36. Compton's Most wanted - Hood Took Me Under

Positive K is an NYC Hip Hop veteran, loosely associated with MC Lyte and the Audio Two. This single with massive mainstream appeal is not really representative for the rest of his debut album The Skills Dat Pay Da Bills, which is strictly early 90s NYC boom-bap. “I Got A Man” is a dope track and a fun listen anyway, and can not be left out a best of… 1992 list.

DJ Quik has always been his own man, with his own signature funky and smooth sound and his own ‘stable’ of protegees and affiliated artists. His is his second album was another solid effort, maybe just a little less consistent than his classic debut was, but packing a few classic tracks anyway – “Jus Lyke Compton” and this title track among them.

“Deep Cover”, also known as “187“, is Dr Dre’s debut single, the first track released after the breakup of N.W.A. The track was recorded for the soundtrack of the film Deep Cover. It is also Snoop Doggy Dogg’s first appearance on record.

When Lord Finesse discovered a young kid rapping in the back of a record store, he immediately recognized the kid’s talent and ability – and invited him to do a track together – what followed is history. This is Big L‘s first appearance on wax and he lays down a verse that is more than indicative of what he was capable of. Much like Lord Finesse himself, Big L immediately shows he is one of the best punchline rappers ever, with a natural and unbeatable flow.