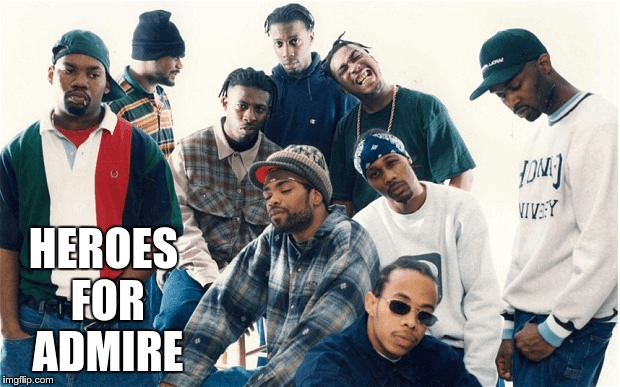 What’s in a name?  Well, everything.

Straight up, the Wu-Tang Clan are Hip Hop’s Avengers. Just doing a roll call can breathe new life into you.  These fellas from Staten Island came with the idea that no matter what happened, they were in this together until the end. It certainly didn’t hurt that they brought to the table something that we’d didn’t realize was missing from the rap landscape: pure Hip Hop with incredibly functional variety.

The RZA does an outstanding job establishing their cinematic sound, becoming a force of nature all to himself. The GZA couldn’t drop a stupid or wack rhyme if his life depended on it. Method Man’s energetic and complex bars makes it impossible to not get hyped as hell. ODB’s amazing uniqueness is still tragically missed. Inspectah Deck might as well be a rhyme engineer, building immense skyscrapers and landscapes easier than SimCity. U-God growls and destroys tracks like a wildin’ grizzly bear. Masta Killa serves up dope lines with the wisdom of a fully woke super soldier. Raekwon dropped one of the most amazing albums you’ll ever hear as hot as a short order cook serving fries. Ghostface might be a living, breathing rap cryptid, howling fly a** rhymes into the night’s sky. The addition of Cappadonna just pushed this collective into Hip Hop perfection.