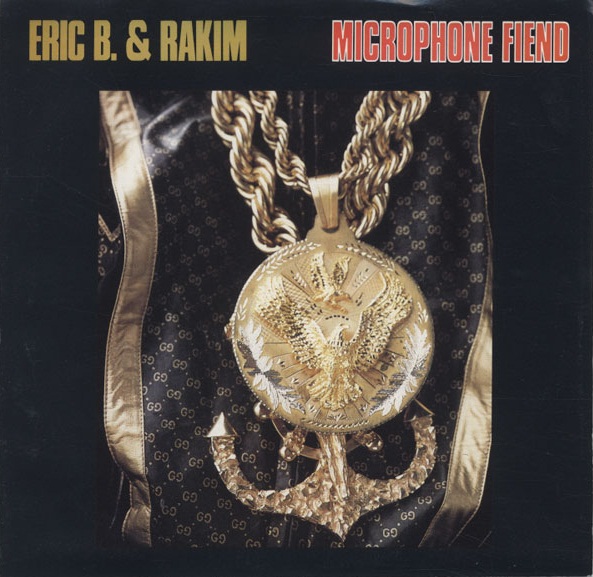 Top 40 Hip Hop Songs 1988: this was Hip Hop’s break-out year, arguably the second or third year of its Golden Age, but THE year that artists creativity, innovativeness, and diversity truly took Hip Hop to the next level. Where 1987 produced four or five genre-defining albums, 1988 saw at least a dozen albums released that would all turn out to be hugely influential classics. For what is without a doubt one of the best and most important years in Hip Hop history, we have selected 40 of its very best songs. In a year such as 1988, inevitably a lot of deserving tracks did not make this list – if you think songs we left off should have been included, please let us know in the comments!

This beat. These lyrics. PERFECTION. Strangely the single release of this track wasn’t a huge success in 1988, but since then this track has rightfully come to be recognized not only as the quintessential Eric B & Rakim song but as one of Hip Hop’s biggest songs as well.

The ultimate example of Big Daddy Kane’s rapping prowess and lyrical skill. Pure, unadulterated Hip Hop – it doesn’t get any better than this. One of the stand-out tracks of the all around masterful debut album Long Live The Kane (of which the almost as good “Raw” track would also have been included here, if the original version of that song wasn’t already on our Top 40 Hip Hop Songs 1987 list).

3. Boogie Down Productions - My Philosophy

This track was so far ahead of its time, Hip  Hop still hasn’t caught up yet. Filled with Hip Hop Quotables, this song addresses the commercialization of Hip Hop and the rise of wack and fake rappers. Almost 30 years old and more relevant today than ever.

Prophetic and brilliant, My Philosophy will always be considered one of Hip Hop’s biggest songs EVER.

4. Public Enemy - Black Steel In The Hour Of Chaos

N.W.A’s Straight Outta Compton album was a game-changer; for better or for worse. One of the first real Gangsta Rap albums, going multi-platinum without any radio play. It influenced and changed the direction of Hip Hop, producing countless clones for decades to come. The difference between all the clones and this album is the originality and authenticity of Straight Outta Compton; combined with the revolutionary & flawless production of Dr Dre and the raw energy & at the time shocking lyrical imagery of Ice Cube, MC Ren & Eazy E. The album is a super classic and this title track the perfect opening salvo.

After he made his imprint on the scene in 1985 on Doug e Fresh’s classic songs “The Show” and “La Di Da Di”, Slick Rick released his nearly flawless debut album The Great Adventures Of Slick Rick in 1988. Slick Rick’s superior story telling abilities, combined with his humor and typical rap style shine on the whole album, this song is the best track.

The powerful title track of the classic 1988 movie “Colors”, will forever be one of Ice T’s most recognizable tracks. Easily one of the greatest Hip Hop songs ever.

With “Rebel Without A Pause” and “Bring The Noise, the first singles from Public Enemy‘s monumental It Takes A Nation Of Millions To Hold Us Back, already included on our Top 40 Hip Hop Songs 1987 list – P.E.’s classic critique of false media and rumors is yet another winner from their classic sophomore album. Classic beat, classic rhymes, classic hook. Don’t Believe The Hype!

One of the most controversial songs in Hip Hop ever? The sad thing is that in the more than 30 years since this song was recorded nothing has really changed…

Five minutes of lyrical perfection. Together with Lyrics of Fury, perhaps one of the best examples of how advanced Rakim was with his lyricism. Listen to it and then listen to it again and let it sink in. Rakim will take the listener on a metaphorical trip into outer-space and then back into the listeners head. A lyrical masterpiece.

12. Stetsasonic - Talkin' All That Jazz

This underappreciated song is a response to critics of sampling in Hip Hop. The stand-out track from Stetsasonic’s solid second album In Full Gear.

An emcee who can spit with the best of them, male or female. MC Lyte‘s debut album still is a classic piece of work, that belongs in any Hip Hop fan’s collection. “Paper Thin” is the now-classic cut with which Lyte made her mark.

This revamped version for Eazy E‘s debut album Eazy Duz It is even better than the 1987 original. Another classic Dr Dre production.

A powerful display of lyrical mastery. Complex rhyme schemes, internal rhyming, spitfire delivery, breath control – all on the highest level here. The dark and chaotic backdrop on this track only enhances Rakim’s power on the mic. “A performance never again performed on a mic” – WORD!

Universally recognized as one of Hip Hop’s biggest singles ever, this song shows us what a legendary emcee and producer can accomplish when working together while both of them are on the peak of their abilities. “For you to beat me/it’s gonna take a miracle” – and that’s the truth.

The Symphony is the standard by which all other posse cuts are measured.

This track is HARD. Sick instrumental and rhymes – arguably the best track of Run DMC’s fourth album Tougher Than Leather.

We could have included almost all tracks of Slick Rick’s Great Adventures…, we chose this particular song – the third single of the album – because of its meaningful lyrics.

With “Ego Trippin'” and “Funky” already included in the 1986 and 1987 lists respectively, it was still hard to pick a track from the brilliant Critical Beatdown album. We settled for “Watch Me Now”, but could have picked a number of other songs as well – as Critical Beatdown was as consistent as it was creative and innovative.

Pure and uncut Hip Hop from this forgotten crew from Philadelphia. DJ Too Tuff KILLS it.

Kind of a unique track in N.W.A’s repertoire, as it is free of profanity. The song is addresses authenticity and censorship in music, it’s also noteworthy because of the Dr Dre’s lyrics “I still express, yo I don’t smoke weed or sess / Cause it’s known to give a brother brain damage / And brain damage on the mic don’t manage nothing…” – while he would go on to record the ultimate Hip Hop classic The Chronic only a few years later.

Another LL Cool J hard-hitter produced by Rick Rubin. LL destroys Kool Moe Dee on this track in response to the dis Kool Moe Dee directed at LL on his album How Ya Like Me Now.

This platinum selling single is one of the biggest songs in Hip Hop, ever. Massive crossover appeal and a party favorite to this day. R.I.P. DJ EZ Rock.

MC Lyte effortlessly destroys Antoinette – a female emcee who had a feud with Lyte and the Audio Two over alleged ‘beat biting’. This is how you do it.

De La Soul‘s debut single, released before their seminal classic 3 Feet High & Rising in 1989. A delicious introduction to one of the most respected acts Hip Hop will ever know.

High Rollers is the highlight of the all around excellent Power album. Not just glamorizing the hustlers’ life of crime, but also addressing the risks involved in such a lifestyle. Dope track.

One of the stand-out tracks from the excellent By All Means Necessary album. As early as 1988 KRS proclaims with confidence he is ‘still’ number one, and will still be fifty years down the line. With three decades in, he certainly is well on his way.

One of the absolute highlights on Eazy Duz It, mainly because of Dr Dre’s epic production on the track. “Yo Dre, give me a funky-ass bassline…”

33. Jungle Brothers - Straight Out The Jungle

The title track from the excellent debut album of the Jungle Brothers, a group affiliated with The Native Tongues collective. An influential album – it marked the beginning of a series of classic albums by groups like De La Soul, A Tribe Called Quest and Black Sheep. This song is the perfect introduction to an underrated group (who admittedly made some bad albums later on after label troubles broke the flow in their career).

1988’s prelude to Big Daddy Kane’s 1989 album It’s A Big Daddy Thing. This is a battle rhyme classic. Kane once again shows he is a wordsmith like no other as he flows effortlessly over a hard-ass beat.

After “Top Billin'”, the first single from Audio Two’s debut album was released in 1987, expectations were high for their debut album What More Can I Say? The duo failed to deliver however, because outside the mega-classic single “Top Billin'” there was only one other really good track on the album – this one.

That bass! Originally released in 1988 as a single from the Less Than Zero soundtrack and in 1989 as part of LL’s third album Walking With A Panther, this track is another LL Cool J banger co-written and produced by Rick Rubin.

King Tee is a much respected West Coast Hip Hop veteran, who dropped a bunch of dope albums in the late 80s and early 90s. For some reason, he never got the recognition and fame of some of his contemporaries, but real heads know what’s up. The DJ Pooh produced “Bass” is one of the many stand-out tracks from King Tee’s classic debut Act A Fool.

Classic sampling of Bob Marley’s “I Shot The Sheriff” gives this opening track of EPMD’s epic debut its ultra-recognizable hook.  The perfect opener of a landmark album.

One of the highlights of Too Short‘s second studio album Life Is… Too Short, arguably one of the most consistent and best albums in his whole (extensive) catalog. This song is a signature Too Short track – it has him going off for 7 minutes, delivering his trademark ‘dirty raps’ over a thumping beat.

The 7A3 was a group based in Los Angeles, consisting of a young DJ Muggs (pre-Cypress Hill) and the emceeing brothers Brett and Sean Bouldin. They dropped a dope album in 1988 – Coolin’ In Cali – but are perhaps best known for contributing this awesome track to the classic Colors Soundtrack.