“Hey yo Jeff gets down cause he's superior, others inferior - I rap a whole record to try to make it clear to you...”

Rapper Will Smith (The Fresh Prince) met disc jockey Jeff Townes (DJ Jazzy Jeff) in the 1980s, when they were both trying to make names for themselves in West Philadelphia’s local Hip Hop scene. After joining forces with Clarence Holmes (Ready Rock C) the team members became local celebrities.

The group received the first Grammy Award for Best Rap Performance in 1989 for “Parents Just Don’t Understand”, though their most successful single was “Summertime” which earned the group their second Grammy and peaked at number 4 on the Billboard Hot 100. Will Smith and Jeff Townes are still friends and claim that they never split up, having made songs under Smith’s solo performer credit. DJ Jazzy Jeff & The Fresh Prince have sold over 5.5 million albums in the US. 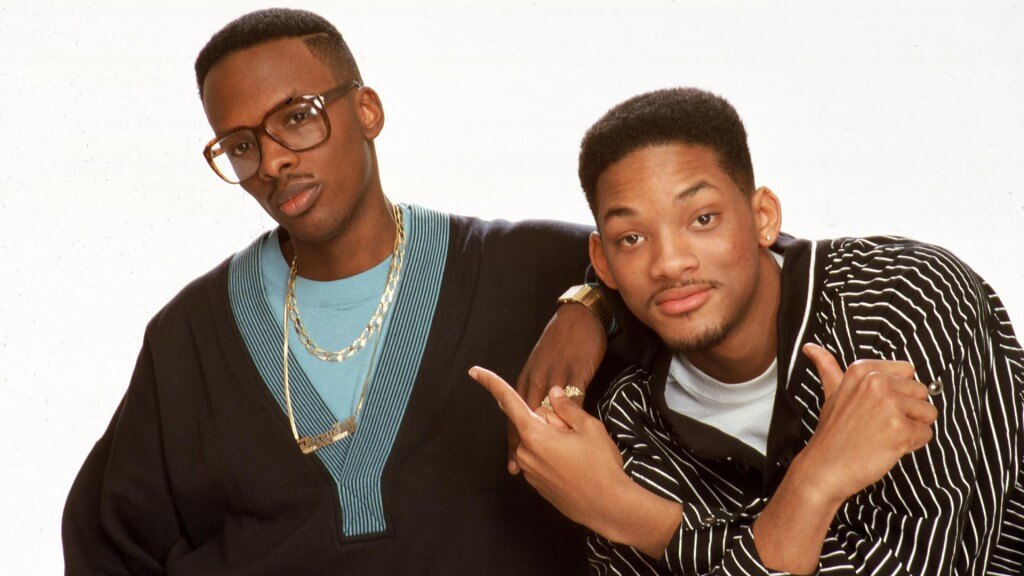 Jeff Townes and Will Smith were introduced to each other by chance in 1985. One night, Townes was performing at a house party only a few doors down from Smith’s residence, and he was missing his hype man. Smith decided to fill in and both felt strong chemistry.

Soon after, the two decided to join forces. Smith enlisted a friend to join as the beatboxer of the group, Clarence Holmes (Ready Rock C), making them a trio. Philadelphia-based Word Up Records released their first single in late 1985 to 1986 when A&R man Paul Oakenfold introduced them to Word Up with their single “Girls Ain’t Nothing but Trouble,” a tale of funny misadventures that landed Smith and his former DJ and rap partner Mark Forrest (Lord Supreme) in trouble. The song sampled the theme song of “I Dream of Jeannie.” Smith became known for light-hearted story-telling raps and capable, though profanity-free, “battle” rhymes. The single became a hit a month before Smith graduated from high school. Townes was known for his turntable acrobatics, and he is credited by many as inventing a style of scratching called transforming.

Based on this success, the duo were brought to the attention of Jive Records and Russell Simmons. The duo’s first album, Rock the House, which was first released on Word Up in 1986 debuted on Jive in March of 1987. The album sold about 300,000 units. That same year, the band found themselves on their first major tour with Run DMC, Public Enemy, and others. 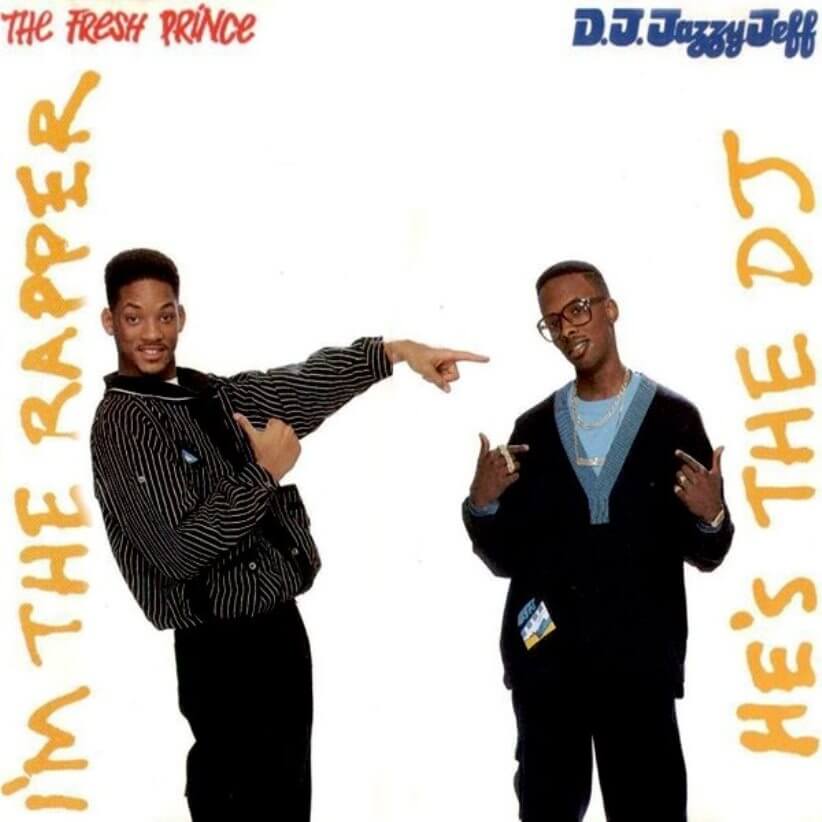 Their 1988 follow-up album, He’s the DJ, I’m the Rapper, made them multi-platinum stars. Mostly recorded in the United Kingdom, the album was rap music’s first double-vinyl LP release; it was also issued as a single cassette and CD. “Parents Just Don’t Understand”, the lead-off single, made them MTV household names and also gained the honor of the first Grammy for a Hip Hop/rap song, which was met with mixed feelings. Nevertheless, the single was a success, launching the group into even more mainstream stardom.

The video showed Prince’s misadventures of trying to get around his parents’ strict rules in a very comical way, very much like their first single “Girls Ain’t Nothing but Trouble”. It gained much airplay on TV channels such as MTV, giving the group much attention. The song was played in an episode of The Fresh Prince of Bel-Air (“Someday Your Prince Will Be In Effect (Part 1)”), and referenced in two other episodes of the same series (“The Fresh Prince Project” and “Not With My Pig, You Don’t”).

The last single from He’s the DJ, I’m the Rapper was “Brand New Funk” sampled a James Brown song and quotes it; however, it is Ready Rock C saying get down in the song. In the song, the Fresh Prince explains how Jeff has brought in a tape that contains a very cool song that he cannot help but rap over, and how fans react to it. The song was well received by many Hip Hop fans due to its funk sound, lyrical spins, and the fact that it showed off more of the skills of Jazzy Jeff. The video was shot in black and white, showed live performance clips from a concert and featured 2 Damn Hype Dancing.

1989 saw the release of And in This Corner…, the group’s third LP. While the sales were a success, reaching gold, the duo’s popularity was slipping. The crossover curse of various rap acts had come to pass, as their initial audience felt they had become too accessible; non-crossover rap acts like Big Daddy Kane and Boogie Down Productions had bigger street followings; meanwhile, pop radio had latched on to new faces like Tone Loc and Young MC, while non-radio followers became more enamored with hardcore acts like Ice-T and 2 Live Crew.

The lead single, “I Think I Can Beat Mike Tyson” was in the same vein as their other lead singles; with this one having Will say he could literally beat Mike Tyson in a boxing match. Jazzy Jeff is shown training Prince to perform this task, and after Prince loses, Jeff then claims that he might be able to do it himself. James Avery and Alfonso Ribeiro (co-stars of The Fresh Prince of Bel-Air) show up as Don King and member of the fighting crew’s posse, respectively.

The next single was “Jazzy’s Groove”, sampling “Nautilus” in the chorus and bridge. The song features much more of Jazzy Jeff, like in “Brand New Funk”; Jazzy Jeff gives a ‘math lesson’ by making the sound clips add 1+1, 2+1, and 2+2.

Due to a self-admitted spendthrift attitude, Smith felt he had nothing to lose when a producer from NBC and Quincy Jones approached him with an idea for a sitcom, with Townes appearing as a recurring character, named “Jazz”. The Fresh Prince of Bel-Air boosted his profile and his pocketbook. Smith blew through almost 2.8 million dollars, while giving none to the IRS for taxes. Soon after And in This Corner… was released, Smith was sentenced by the IRS to pay this all back. For the first three seasons of The Fresh Prince of Bel-Air, Smith had 25% of his paycheck garnished by the IRS.

Still having a bit of extra money from starring in the successful sitcom, the duo decided to stage a comeback album in 1991, Homebase. The platinum album featured a more mature sound from the group, with Smith rapping in a deeper, consistent voice and changed their sound to fit the era’s trend of Hip Hop. Homebase featured the lead-off single “Summertime”, which added rap lyrics to the music of the Kool & the Gang instrumental “Summer Madness” and has become one of their most enduring hits. The video features clips from a family reunion in Philly, and shows the duo being driven around while sitting atop a car. Summertime earned the duo its second Grammy win.

Code Red, their last studio LP as a duo was released in 1993, reaching gold sales. This LP featured a self-admitted harder sound than their other songs, with Jazzy Jeff saying “We wanted to take a new direction. It wasn’t that we were concentrating on harder, it was just different”, featuring more jazz and soul samples than previous releases. The lead single “Boom! Shake the Room” reached #1 in UK and Australia, and featured a harder sound than any of their other songs. Other singles were “I’m Looking For the One (To Be With Me)”, which is similar to “Summertime”, and “I Wanna Rock”, which showed off more of Jazzy Jeff’s DJ skills.

Shortly afterward, Smith began to pursue acting full-time. He played his first lead film role in 1993’s Six Degrees of Separation. The 1996 blockbuster Independence Day cemented him as a major draw, and he left the Fresh Prince sitcom that same year. He and Townes ended up being sued by Jive, who alleged that the duo was still under contract to create more albums. In an interview, Smith has stated that while shooting Men in Black he approached Jive with the “Men in Black” single; they turned him down, saying that it couldn’t be a hit. In the aftermath of the movie and soundtrack’s success, the duo settled the lawsuit out of court. Hence, their greatest hits compilation includes two cuts from the M.I.B. soundtrack.

Since then, Smith has released three solo CDs on Columbia Records. The duo collaborated in Smith’s successful album, Willennium. After being dropped by Columbia, he released one CD in 2005 on Interscope Records.

Townes released two albums on the famous UK DJ label BBE. He continues to tour the world as a respected DJ. He has also become an R&B producer of note, overseeing releases by Jill Scott, Rhymefest and many others. His production company A Touch of Jazz became the launching pad for talent out of the Philadelphia music scene. Producers, songwriters and instrumentalists from the team include Dre & Vidal, Carvin & Ivan, Kev Brown, Darren “Limitless” Henson, Keith Pelzer and Pete Kuzma.

Will Smith appeared on the May 24, 2013 edition of the BBC talk show The Graham Norton Show with his son Jaden Smith to promote the film After Earth. After performing a brief freestyle rap with his son, Will Smith brought on Townes as Jazzy Jeff and the two performed the Fresh Prince of Bel-Air (with Jaden contributing backing vocals) before Smith’s co-star from the sitcom, Alfonso Ribeiro, was brought on to complete the reunion.