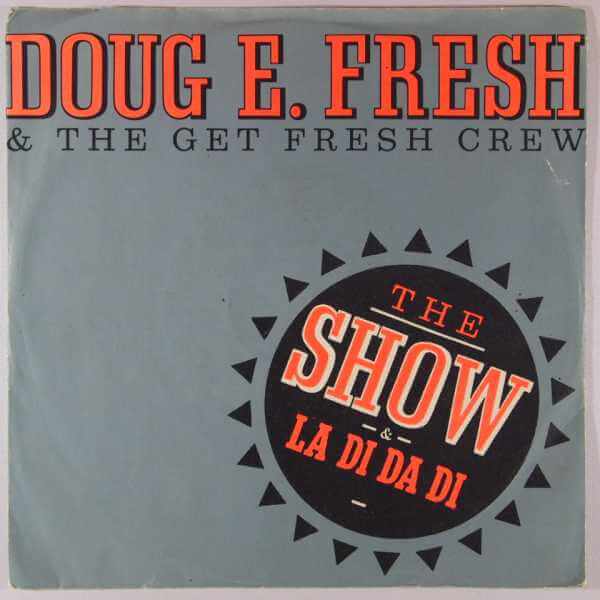 Top 40 Hip Hop Songs 1985: this was a pivotal year in Hip Hop. Def Jam Recordings was taking over and shaping Hip Hop into what would soon become a major global musical and cultural phenomenon. The disco- and electro-infused soundscapes of Hip Hop’s Old School were on their way out – and in were sparse, hard-hitting beats and scratches. Run DMC and LL Cool J were running the game – but Hip Hop was expanding, with artists from cities other than New York taking to the spotlight as well. 1985 would turn out to be the middle of three years that were the lead-up period to Hip Hop’s real breakout years and the start of the Golden Age.

For this list, we have selected 40 of 1985’s very best and most influential songs, with a few a bit more obscure ones thrown in as well. Missing any? Hit us up in the comments!

These (double A-side) songs from Doug E Fresh & The Get Fresh Crew, featuring Slick Rick, are among the most classic tracks in Hip Hop, ever.

From LL’s groundbreaking debut album Radio, Rock The Bells will always be one of LL Cool J’s signature tracks and a landmark track in Hip Hop history.

Also, check out the original Rock The Bells version which did not appear on the Radio album. This version has LL spittin’ rhymes over 7 minutes of hard-hitting, bells-infused Rick Rubin beats.

One of the first songs that was labeled ‘gangsta rap’ and THE track that inspired Ice T to write 6 N The Morning. Hugely influential, this is an all-time classic by Philly legend Schoolly D.

One of the first female emcees to leave a big mark on the game was Roxanne Shanté. As a teen, she build a reputation as a vicious freestyle- and battle rapper. As part of Marley Marl’s Juice Crew she dropped some great singles – this is but one of them. Just gotta love that Marley Marl instrumental.

A B-boy’s love declaration to his boombox in particular and Hip Hop and the B-boy lifestyle in general. A timeless Hip Hop classic.

UTFO (which stands for Untouchable Force Organization) consisted of emcees The Educated Rapper, Kangol Kid and Doctor Ice, and DJ Mix Master Ice. This tribute to Mix Master Ice is one of the stand out tracks from their 1985 self-titled debut album.

The lead single from Mantronix’ debut album – a forgotten classic with a perfect blend of electro-infused bass heavy tracks provided by Kurtis Mantronik and slick lyricism by MC Tee.

The lead track from their second album, King Of Rock is another rock-infused song that helped cement Run DMC’s status of Hip Hop’s newest superstars with massive crossover appeal.

Did you know Run DMC performed this track at the legendary Live Aid concert in 1985?

This early Beastie Boys track was released on the soundtrack of the 1985 Krush Groove movie. The track was produced by Rick Rubin, featuring his typical hard drum beats combined with rock guitar riffs.

A forgotten track from an early Def Jam act. This is a dope Run DMC-esque track – the emcees are named Butter Love and Cool T, and you can just hear the production is done by Rick Rubin, assisted by Run and Jam Master Jay.

This track goes HARD. Yet another track where the DJ is spotlighted, this time it’s MC Shan rhyming about Marley Marl, who provides the banging instrumental.

Straight Outta Compton – way before N.W.A started making noise – Toddy Tee came out with this commentary on the tank-like vehicle the LAPD used to use to break down suspected crack houses. A distinct departure from the disco / electro sounds and party lyrics that were still prevalent at the time, this track is a true pioneering piece of work – sonically and lyrics-wise.

Another perfect song that has Run and DMC trading their rhymes over a simple but dope 808 beat. Straight up Hip Hop.

Great beat, great lyrics, great scratching, this track is dope as hell. Steady B was one of the Philadelphia Hip Hop pioneers. Today he is sadly in jail for life, after a botched bank-robbery in 1996 (during which fellow Philly rapper Cool C shot and killed a female police officer).

A beat done by Rick Rubin in 1985 – so you know what to expect. Sparse and hard – a typical Def Jam song for that time. Dope!

Another track that perfectly exemplifies the B-boy feeling and has LL spittin’ dope rhymes about his own abilities. One of the best tracks from the groundbreaking Radio album.

Still sounds like it’s from the future in stead of from over 30 years ago. Without a doubt Mantronix is one of the most overlooked and underappreciated duo’s in Hip Hop, ever.

One of those singles every Hip Hop head had on a mixtape in the mid-80s. There were different versions going around, all of them dope.

Another hard-hitting track from LL Cool J’s debut album, one that exemplifies LL’s B-boy attitude to the fullest. LL Cool J at his best.

“Looking at my Gucci, it’s about that time…” A classic line from a classic song.

Trademark tag-time rhyming from Run and DMC on a track with great riffs and turntable work. Did you know LL Cool J (co)wrote the lyrics for this song?

This T La Rock track was co-produced by Special K and mixed by label mate and regular collaborator Kurtis Mantronik. It is said it was T La Rock’s style LL Cool J modeled his own lyrical delivery on.

Just as with “Roxanne’s Revenge” (1984), the rapping on this track was totally improvised, done in one take off the top of her head. As always Marley Marl’s production is on point.

The Boogie Boys from Harlem, New York scored one hit in 1985 with this song, from the album City Life. They disbanded in 1988 but left a lasting impression with this song at least.

Another one of the outstanding tracks from Mantronix’ classic debut album.

This track from one of the early Too Short tapes was originally recorded in 1983 and (re)released on his 1985 Don’t Stop Rappin EP. It’s a cautionary tale against drug use.

This song is another perfect example of how in Hip Hop early days emcees liked to rap about the importance of the DJ in a Hip Hop crew. “King Kut” features several recognizable samples and DJ Cheese definitely takes over the track. DJ Cheese won the World Mixing Championships in 1986.

Probably the best known song from this forgotten crew from Baltimore. A big track back in the day, also overseas on mixtapes.

Included in this list if only for its historical significance, this early Ice T track already shows some of the promise Ice T would deliver on soon after. A 5-year Hip Hop veteran by the time of this recording, Ice T is truly of Hip Hop’s all-time greats.

Do you remember when Hip Hop was fun? No fake wannabee gangstas yet, just crews dropping rhymes over banging old school beats, with some beatboxing and turntablism thrown in the mix. Listen to this track and get nostalgic…

Kurtis Mantronik was a major force in mid-80’s Hip Hop, not only producing for pioneers like T La Rock and Just-Ice, but also releasing his own music – together with emcee MC Tee. Their debut album may just be one of the most underappreciated albums in Hip Hop history.

Another classic UTFO track from their self-titled debut album. The biggest classic from that album – Roxanne, Roxxane – would have been high on this list, had it not been released a year earlier in 1984.

One of the humorous songs from his debut album, on this track LL raps about his unfavorable opinions on a girl named Yvette. Dope beat, dope rhymes, dope hook.

One of the dope joints K-Rob put out that year, it has that typical 1985 sound. Check it out if you have never heard it before!

First-hour Juice Crew member is one of the most underrated emcees in the game. An excellent freestyle rapper and still going strong today, this Marley Marl produced track is one of the first singles of a very young Craig G.

The lead single from their second album, this does just what we’d come to expect from the Fat Boys – giving us some humorous rhymes over a radio-friendly old school beat.

Donald D – who would later go to L.A. to join Ice T’s Rhyme Syndicate and to drop a few solo albums – was part of this NYC crew. They made some noise in the underground back then, this is probably their best(known) single.

This is another forgotten track, with that typical mid-80s sound and style – a perfect song to close out this 1985 Top 40!