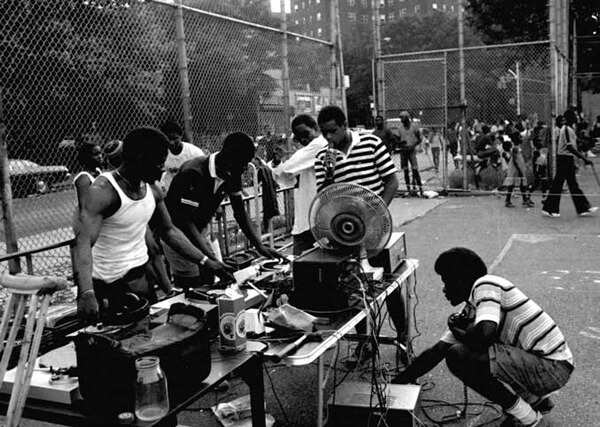 Going way way back to the early days…

An excerpt from “Going Way Back” – the classic Just Ice song from 1987. Today, many people see 1987 and even later as ‘Old School’, but that is wrong. Old School Hip Hop is the period from the emergence of Hip Hop in 1973 to approximately 1986.

On August 11, 1973, a DJ named Kool Herc threw a party in the basement of an apartment building at 1520 Sedgwick Avenue in The Bronx, New York. Of course, the foundations of Hip Hop were laid even earlier and in different places by different people, but August 11, 1973 has become sort of a symbolic date signifying ‘the birth of Hip Hop’. 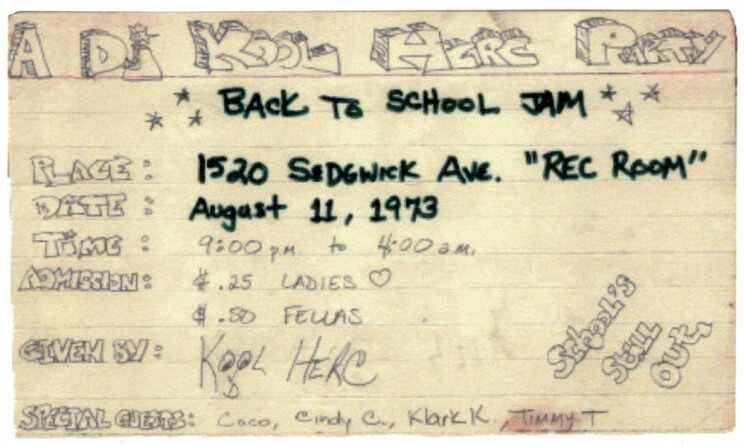 Kool Herc is one of the pioneers when it comes to live-mixing together two different songs. This way the ‘breakbeat’ was born, on which people would dance (hence: breakdancing – dancing on a breakbeat). Later, people like Kool Herc and Afrika Bambaataa organized ‘block parties’, where DJs created music using breakbeats and scratching. After the DJs came the emcees, who started rapping to the beats.

It took six years before the first Hip Hop album was recorded and released – Rapper’s Delight by the Sugarhill Gang (even though still heavily influenced by disco sounds). In the early ’80s, Hip Hop artists released mainly singles and only from the mid-80s on – when the record labels started to get behind it – the world saw regular Hip Hop album releases.

Since then, Hip Hop rapidly grew from a local thing into a global phenomenon. Roughly speaking one could say the Old School ended in 1985 / 1986 after which the Golden Age of Hip Hop started. Below you will find 10 important Old School Hip Hop tracks listed chronically, 10 songs that have laid the foundation for Hip Hop as a major musical and cultural force in the world.

The first (or actually the second … ) Hip Hop song that was released as a single. It became a huge hit around the world. There are many disco influences in the music, but the raps are classic. (And never forget Grandmaster Caz wrote some of them!)

Kurtis Blow was the first rapper to sign a contract with a major record label . “The Breaks” was the first Hip Hop single that went ‘gold’. A hugely important and influential track.

The Treacherous Three is a crew of Hip Hop pioneers from who Kool Moe Dee is the best known. “Body Rock” is a typical song of the time: long and full of that Old School style of rapping . The first Hip Hop song to use rock influences.

This is a single from the first Hip Hop group ever to get a record deal. Also, this first group with a female rapper. No doubt you’ve heard samples from this classic track in later Hip Hop favorites many times.

Despite the controversy surrounding him today, Afrika Bambaataa will always be an important name in the history of Hip Hop. He helped reducing gang violence in New York, letting inner-city youths come together and battle through dancing instead of getting violent. He is less known for his music, though this (heavily disco and electro-influenced song) is a classic.

Another classic track, best known from the documentary film Style Wars (1983), a must-see for anyone who wants to learn more about the early Hip Hop culture.

Perhaps the most important song in Hip Hop history, ever. Up till then Hip Hop lyrics were mostly about fun, parties, and bragging. “The Message” was the first song with unabashed commentaries on life and society, and it had a huge influence on many conscious Hip Hop artists who came later.

Melle Mel is seen by many as one of the best rappers ever, and Grandmaster Flash was a true DJ pioneer. Along with Kool Herc and Afrika Bambaataa, Flash is often considered one of the “Godfathers of Hip Hop”.

Being released in 1984, this first single from Run DMC could still fit in the Old School category when we only look at the timeline, but in terms of sound it actually does not. This song is a perfect early indicator of the direction Hip Hop was going in. Harder, sparser beats and a new, more aggressive style of rapping. Run DMC is THE group that is responsible for bringing Hip Hop from the Old School to the Golden Age.

One of the greatest Hip Hop party tracks ever, with the first appearance from Slick Rick – who together with beatboxer and rapper Doug E Fresh dropped this unforgettable song (along with the just as classic La-Di Da-Di).

This track by Just-Ice ( with the help of a young KRS-One) is not an Old School song but it is ABOUT the Old School. The lyrics deal with the origins of Hip Hop in the Bronx and the rest of New York. Just-Ice names everyone that matters – a true lesson in Hip Hop history.