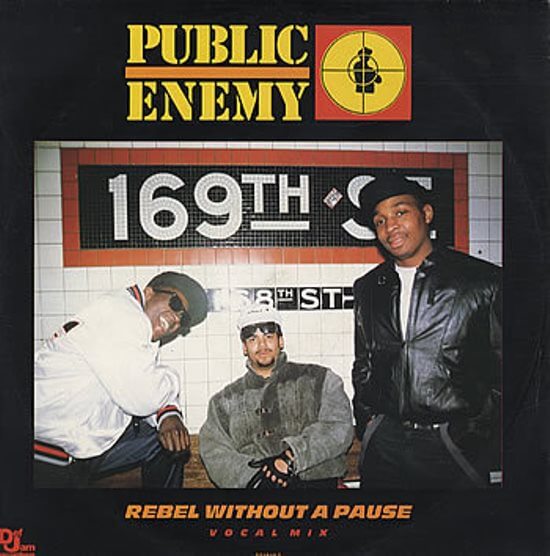 Top 40 Hip Hop Songs 1987:  this was the lead-up year to what would turn out to be Hip Hop’s real break-out year: 1988. For Hip Hop, 1984, 1985, and 1986 were defining years, leaving behind the Old School and slowly but surely ushering in Hip Hop’s Golden Age. The disco- and electro days of Old School Hip Hop were over, and under the influence of Def Jam and producers like Marley Marl, Hip Hop started to sound sparser and harder. The increasing use of sampling created more diversity and more room for innovation and creativity.

There were a few landmark albums in 1987 – Eric B & Rakim’s Paid In Full, Public Enemy’s Yo! Bum Rush The Show, Boogie Down Production’s Criminal Minded, LL Cool J’s Bigger And Deffer, and Ice-T’s Rhyme Pays most noteworthy among them – that would help steer Hip Hop in new directions and to great heights. For this important year in Hip Hop, we have selected 40 of its very best songs. Are you missing any? Let us know in the comments!

1. Public Enemy - Rebel Without A Pause

“Rebel Without a Pause” was the first song created for and the first single released from Public Enemy‘s masterpiece It Takes a Nation of Millions to Hold Us Back. The song was released in 1987, way before the album came out in the summer of 1988, and it was sort of a bridge between the still somewhat unpolished sounds of Yo! Bum Rush The Show to the Bomb Squad produced perfection on It Takes A Nation. Instant classic.

BOOM! This is what an opening track should sound like. Rakim immediately sets the tone for the rest of the album (and his career) with this brilliant song. After dropping their first two classic tracks – “Eric B Is President” and “My Melody” – in 1986, Eric B & Rakim really raised the bar in 1987 with Paid In Full – one of the top albums in all of Hip Hop’s history.

Talk about a classic Hip Hop song. The brilliant reworking of the “Impeach The President” beat is simply unbeatable. Even if they never made any other real noteworthy music, Audio Two will forever be remembered because of this monumental track – released in 1987 as the lead single for their 1988 album What More Can I Say?.

The debut solo single from Eazy-E (produced by Dr. Dre, lyrics written by Ice Cube), the original version featured on the NWA & The Posse album, released in 1987. A hugely influential all-time classic.

This track by Just-Ice (with the help of a young KRS-One) deals with the origins of Hip Hop in the Bronx and the rest of New York. Just-Ice names everyone that matters – a true lesson in Hip Hop history.

LL Cool J at his bragging and boasting best, “I’m Bad” will always be one of LL’s most recognizable songs and one of his biggest hits.

Just one of the classic tracks of Criminal Minded. Clever lyrics, a banging instrumental – this song, along with the rest of the album, was crucial in the maturing of Hip Hop and was one of the albums (together with Run DMC’s Raising Hell, Eric B & Rakim’s Paid in Full, Public Enemy’s Yo! Bum Rush The Show and LL Cool J’s first two) that started Hip Hop’s Golden Age.

The memorable bass line and Rakim’s classic bars – surely one of the most potent one verses ever – assure that this song is one of the most recognizable joints in the history of Hip Hop. Who doesn’t have the words to this one memorized?

Public Enemy’s debut single. Remember, this was 1987. Musically, nothing like this was done before, ever. Highly innovative, this unique Bomb Squad sound would become trademark Public Enemy. Throw Chuck D’s booming voice and his back-and-forth with joker Flavor Flav in the mix and the signature sound of one of Hip Hop’s biggest acts ever is born.

10. Boogie Down Productions - The Bridge Is Over

Directed at the Juice Crew, and in response to MC Shan’s Kill That Noise, this is the final jab on wax in the Bridge Wars. Brilliantly hard in its simplicity, it is instantly recognizable because of the menacing beat, the sharp drum kicks, and the classic piano melody.

From the same album as Eazy-E‘s original version of “Boyz N The Hood”, this track was the no holds barred introduction of N.W.A to the world, with some classic Ice Cube lyrics and revolutionary production by a young Dr. Dre.

Rakim took braggadocious rhyming to a new level by adding an intellectual veneer to it all – nobody could say “I’m the best” the way Rakim did, dismissing all competition casually and effortlessly and always without the use of profanity.

Great beat and a lot of lyrical depth in this second-best track (after “6 N The Morning”, which was released in 1986) from Ice-T’s debut Rhyme Pays. Listen to these lyrics, people.

J.V.C. Force’s classic ode to their home base Long Island is famous because of its sampling of Freda Payne’s “Unhooked Generation”, which provides the catchy sound. J.V.C. Force came out in 1988 with Doin’ Damage, a decent album but not so good they were able to build on the break-out success of this 1987 single. One of the eighties’ biggest one-hit wonders.

The remix of this track would appear on their 1988 masterpiece Critical Beatdown, but this version is noteworthy as well. Raw and uncut, straight from the basement, this is Hip Hop in it purest form. Funky.

Originally included on the Less Than Zero movie soundtrack, Bring The Noise was released as a single in 1987. Lyrically and sonically complex, this track was instrumental in the development of the revolutionary Public Enemy sound that would come to full bloom on It Takes A Nation Of Millions To Hold Us Back. One of P.E.’s most recognizable songs.

Perhaps the most radio-friendly track of the classic Paid In Full album, “I Know You Got Soul” was one of those songs instrumental in opening up new audiences for Hip Hop all over the world.

This gritty battle rhyme masterpiece is the first version of Raw, released in 1987. This version featured Kool G Rap, the remix version would appear on the 1988 album Long Live the Kane. Both versions are dope as hell and established Big Daddy Kane as a lyrical innovator and one of the top lyricists in the game.

From the Boogie Down Bronx… “Lyrical King” is a classic cut from an undervalued pioneer. Kurtis Mantronik’s hard beats and snares, combined with T La Rock’s dope rhymes make for an unforgettable cut.

The opening track to the classic Criminal Minded sets the tone for the rest of the album: hard, minimalistic beats and KRS’ intelligent lyricism.

For some reason, this song is always forgotten in lists like this one. It shouldn’t be, though. The deep bass line perfectly complements Rakim’s clever lyrics, which are inventive and innovative as always.

Oakland legend and Hip Hop pioneer Too Short is a perfect example of a self-made success story. After selling tapes out of his trunk for years, he dropped his first studio album in 1987. “Freaky Tales” was his break-out hit and it would turn out to be a career-defining song for him – explicit player stories over some funky-ass beats. Nobody does it better than Too Short.

Kane’s pre-Long Live The Kane single uses the same Marley Marl beat as Just Rhymin’ with Biz, which would appear on his 1988 debut album. A great throwback track of a young Big Daddy Kane, with a nice old school vibe to it.

26. Public Enemy - You're Gonna Get Yours

None of the political and social consciousness that would become so typical for Public Enemy yet, this track is an ode a 98 Oldsmobile with an instrumental that perfectly fits the lyrics. For a lot of people, this will be the first P.E. track they ever heard, when they went to the record store to listen to the album before buying it (remember those days?). The first track of side A – who was not sold on Public Enemy after You’re Gonna Get Yours was finished?

Aw come on,  just admit it – you know you love this track too. It’s true that LL’s later attempts on love songs/Hip Hop ballads were more often miss than hit, but this pioneering Hip Hop ballad is a classic we all know the words to.

28. Biz Markie - Nobody Beats The Biz

Released as a single in 1987, the Marley Marl-produced “Nobody Beats The Biz” served as a perfect appetizer to Biz Markie‘s 1988 full-length debut album Goin’ Off.

EPMD‘s first single of the classic Strictly Business album that would be released in 1988. A great start of an epic career for one of Hip Hop’s greatest duos.

Yet another dope track from Boogie Down’s Production’s monumental debut album Criminal Minded. The sampling of AC/DC’s “Back in Black” adds flavor to the hard drum beat – making for an influential rap/metal combo.

A dope track from Kool Moe Dee’s platinum-selling second solo album. Unfortunately,  the quality of the beats on Kool Moe Dee’s albums never matched his skill as an emcee – but this is a classic cut. Part of the long-running feud on wax he had with LL Cool J, this song backs up the image he had on his album cover – where a (LL Cool J) Kangol hat is crushed under the wheel of Moe Dee’s jeep.

After KRS-One and Boogie Down Productions possible misconstrued some lyrics in MC Shan’s 1986 single “The Bridge”, they went hard at the Juice Crew with the dis tracks “South Bronx” (1986) and “The Bridge Is Over”. MC Shan’s response to “South Bronx” was this track. Although it’s universally agreed upon that KRS-One won the ‘Bridge Wars’, Shan had bars on “Kill That Noise”.

This revamped version of a track originally on Just Ice’s 1986 debut album comes even harder than the original. Raw and hard, like the rest of Kool & Deadly (a dope album, but with arguably one of the ugliest album covers ever…)

34. DJ Jazzy Jeff & The Fresh Prince - Just One Of Those Days

Trademark early Jazzy Jeff & Fresh Prince. In the storytelling vein of their debut single “Girls Are Nothing But Trouble” (1986), Will Smith humorously recounts a string of bad lucks events in a singularly bad day.

Another year, another Steady B album – his second already. This title track is typical Steady B – hard drum beats and more than competent emceeing. Steady B was one of the Philadelphia Hip Hop pioneers, who today is in jail for life, after a botched bank robbery in 1996 (during which fellow Philly rapper Cool C shot and killed a female police officer).

38. Spoonie Gee - The Godfather Of Rap

Spoonie Gee is an old school rapper who was affiliated with old school acts The Sequence and The Treacherous Three in the late 70s and early 80s. By 1987 he was old news, but with the help of Marley Marl managed to release an album from which this single became quite a big hit all over the world.

39. Heavy D - The Overweight Lover's In The House

From the debut album of one of the most likable characters in Hip Hop comes this funky party track. Remember the days when rappers weren’t afraid to dance and have fun?

Adopting an English accent after he was part of the Kangol Crew with England-born Slick Rick, Dana Dane became a sort of a second version of his more famous former partner. He dropped some more than decent material on his own though, this is one of the highlights of his 1987 debut album.