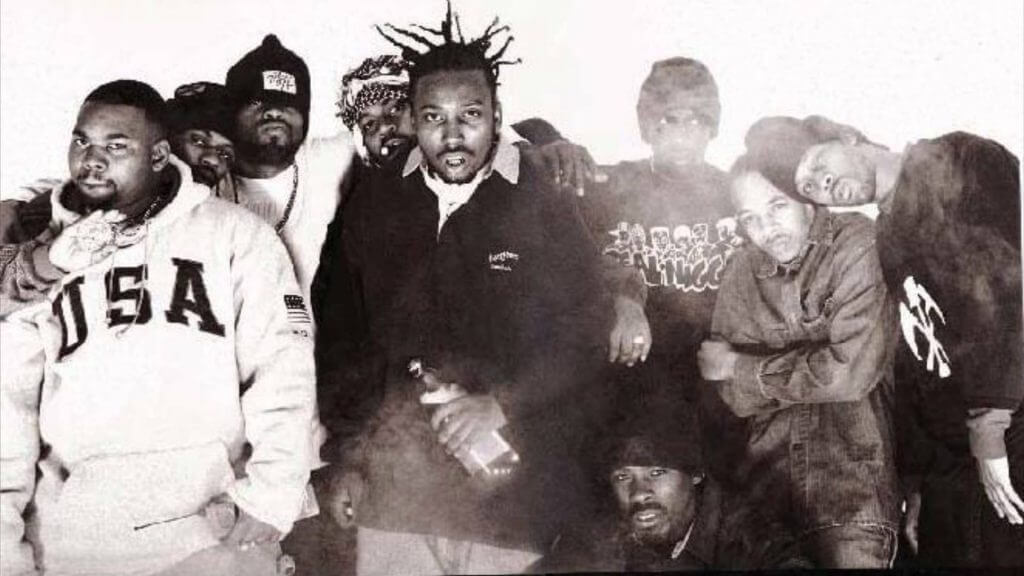 The Wu-Tang Clan arguably is THE most influential and successful Hip Hop collective ever. It all started in the early 90s when GZA teamed up with longtime friend Ol’ Dirty Bastard, to start a crew that would evolve into the Wu-Tang Clan. RZA quickly joined the crew, as did 6 other rappers from their area: Method Man, Ghostface Killah, Raekwon, U-God, Inspectah Deck, and Masta Killa. From the get-go Wu-Tang Clan’s intention was to establish themselves as a group first and then begin to profile themselves by doing solo projects, becoming a major force in the rap game as time progressed – a plan they pulled off flawlessly.

Under RZA‘s creative direction, the Wu-Tang Clan — through its own efforts and the solo projects, all of which RZA produced or co-produced — created a hazy, surreal, and menacing soundscape out of hardcore beats, eerie piano riffs, and minimal samples. Over these surrealistic backing tracks, the MCs rapped hard, updating the old-school attack with vicious violence, martial arts imagery, and welcome warped humor. By 1995, the sound was one of the most instantly recognizable in Hip Hop.

Their debut album Enter The Wu-Tang (36 Chambers) is an absolute Hip Hop classic, as are most of the clan members solo albums released in the mid-90s. For this list, we selected our top 15 Wu-Tang Clan songs. Missing your favorites? Hit us up in the comments!

The only ‘solo’ track from Wu-Tang Clan‘s monumental classic debut Enter The Wu-Tang (36 Chambers), from the first successful solo star of the clan: Method Man. With his trademark voice and lyrics, this track is the perfect introduction to Meth.

“It’s only natural, actual facts are thrown at you / The impact will blow trees back and crack statues / Million dollar rap crews fold, check the sick sh**/ Explicit, I crystallize ya rhyme till you can sniff it…”

The last track of the first album of the double album Wu-Tang Forever. Sure, Wu-Tang Forever was not quite the classic Enter The Wu-Tang was (which was impossible to equal anyway of course), and it may have been a bit too long – but there were plenty of bangers on there, with top-notch lyricism and excellent RZA production. “Its Yourz” is just one of those tracks.

“I can’t go to sleep, I can’t shut my eyes / They shot the father at his mom’s building seven times / They shot Malcolm in the chest, front of his little seeds / Jesse watched as they shot King on the balcony / Exported Marcus Garvey cause he tried to spark us / With the knowledge of ourselves and our forefathers…”

For many, this is a hate-it or love-it kind of song because of the experimental, impassioned rap style Ghostface Killah and RZA adopt. Whether you like it or not: Ghost and RZA both drop impeccable verses and the addition of Isaac Hayes on the hook just adds to the track’s atmospheric, emotional feel.

“It was not a hobby, but a childhood passion / That had started in the lobby and was quickly fashioned / Every line to line, bar for bar is clockwork / Hazardous and powerful enough to have your block hurt / Check the total amount of MC’s inflicted / With torture, from moving with work that’s restricted / We criticize producers til they joints are right / Then acupuncture the track with pinpoints of light…”

Although Wu-Tang Clan fifth album 8 Diagrams may have been a bit of a mixed bag, this track is classic Wu-Tang: 4 dope verses (by Raekwon, GZA, RZA, and Masta Killa), no hook, great production.

“Put the needle to the groove I gets rude and I’m forced / To f*** it up, my style carries like a pickup truck…”

Classic, if only for the anthemic hook. The energy on this track is simply crazy. Just one of the many stand-out tracks from Enter The Wu-Tang (36 Chambers).

“Fleeing the crime scene speeding / Beefing leaving behind cream, not even peeping that I was leaking / Won’t see the precinct just got a recent case beaten / Still jakes are creeping, don’t blow your spot, stay the weekend…”

One of Raekwon’s best flows ever, with Inspectah Deck and Ghostface Killah lyrically killing it as usual too. Minimalistic, tight and chilling, this is one of the best tracks of the much critiqued but somewhat underrated The W album (although the album did suffer from way too much guest appearances). This is a great track though, with verses from Wu emcees only.

“From dark matter to the big crunch / The vocals came in a bunch without one punch / Rare glimpse from the, strictly advanced, proved unstoppable / Reputation enhanced, since the cause was probable…”

The first single of the clan’s fourth album, Iron Flag. Over an addictive beat, all emcees come correct with perfectly crafted verses, especially Inspectah Deck’s and GZA’s are excellent. Suuuuu!

“As we dwell through this concrete hell, calling it home / Mama say, take your time young man and build your own / Don’t wind up like your old dad / Still searching for them glory days he never had…”

Excellent verses by Inspectah Deck, Masta Killa, RZA, U-God and Method Man over an understated instrumental – this one is one of Wu-Tang Forever‘s underappreciated highlights.

“I leave the mic in body bags, my rap style has / The force to leave you lost, like the tribe of Shabazz / Murderous material, made by a madman / It’s the mic wrecker, Inspector, bad man / From the badlands of the killer, rap fanatic / Representing with the skill that’s iller…”

“Reunited, double LP, world excited / Struck a match to the underground, industry ignited / From metaphorical parables to fertilize the Earth / Wicked n***** come, try to burglarize the turf / Scatting off soft-ass beats them n***** rap happily / Tragically, that style deteriorate rapidly / Uncompleted missions, throwing your best-known compositions / You couldn’t add it up if you mastered addition…”

After a very long spoken intro, this opening track of Wu-Tang Forever is a banger and a perfect reintroduction to the clan. The violin melody just stays with you, the hook is nice as hell and the rhymes are dope as always. It’s Wu motherf*****…

“I rip it hardcore, like porno-flick b*****s / I roll with groups of ghetto bastards with biscuits / Check it, my method on the microphone’s banging / Wu-Tang slang’ll leave your headpiece hanging…”

Who remembers going to the record store to listen to the debut album of this new crew from Staten Island? This opening track was all you needed to hear to know you were about to be introduced to something revolutionary. “Bring Da Ruckus” is straight fire – perfect RZA production and excellent wordplay by Ghostface, Raekwon, Inspectah Deck, and GZA.

The debut single from the group’s classic first album Enter the Wu-Tang (36 Chambers). It features verses from eight of the original nine Wu-Tang members. It was an incredible introduction of a new supergroup to the Hip Hop scene and a perfect prelude of equally brilliant things to come.

“I grew up on the crime side, the New York Times side / Staying alive was no jive / Had second hands, Mom’s bounced on old man / So then we moved to Shaolin land…”

The final single from the clan‘s classic debut album. A haunting lesson in street economics; with excellent verses from Raekwon and Inspectah Deck, and with Method Man‘s unforgettable hook. Yet another Hip Hop super classic from their epic first album.

This monumental song features all nine original members of the Wu-Tang Clan, plus Cappadonna. Straight bars, no hook – this is an epic track with Inspectah Deck laying down one of the most lauded opening verses is Hip Hop ever.

“Raw I’mma give it to ya, with no trivia / Raw like cocaine straight from Bolivia / My Hip Hop will rock and shock the nation / Like the Emancipation Proclamation…”

The B-Side to the clan’s classic “C.R.E.A.M”, this track is quintessential Wu-Tang. Crazy bars (with especially Ol’ Dirty Bastard taking center stage), full of Quotables, over a sick RZA beat. Hip Hop doesn’t get any better than this.