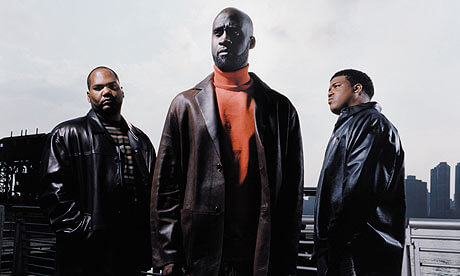 There can never be enough praise for De La Soul. Their status in Hip Hop is virtually unparalleled – no other group (with the possible exception of Public Enemy) can boast the same longevity, never wavering authenticity, and consistent A+ quality output. Truly Hip Hop’s elite, De La Soul created so much Hip Hop classics, that it is virtually impossible to narrow it down to a selection of no more than 15 tracks. We are going to try anyway – let’s just see this list as a celebration of De La Soul’s legendary status and as a starting point of a healthy discussion about De La Soul’s greatest tracks. So here goes: our top 15 De La Soul songs.

If your personal favorites didn’t make this cut, don’t worry, no doubt your favs are excellent De La songs too! Just weigh-in in the comments and tell us which songs you feel should be added (and which ones should be left out…).

“Mirror mirror on the wall / Tell me mirror, what is wrong? / Can it be my De La Clothes / Or is it just my De La Soul?”

Still one of De La Soul’s most famous and most recognizable songs (if not one of their own favorites). As early as 1989, De La Soul was very vocally opposed to cliches in Hip Hop. Their clever and humorous lyrics in this track would pretty much set the tone for the rest of their career and their continued opposition to the dumbification of Hip Hop.

De La Soul never sold out, never followed trends, never felt the need for tough guy/gangsta posturing – they always stayed true to themselves. That makes the message of this song, almost thirty years later, all the more powerful.

“And when I’m watchin the news, and my daughter walks in / And choose to ask, “Why were all those people on the floor, sleepin, covered in red?” / I told her that they were lookin for God, but found religion instead…”

Another track to make you think, in which Pos tells you to think for yourself and to be your own self. Cee-Lo Green’s hook gives a nice gospel flavor to this dope track from the slept on AOI: Bionix album.

“My Art Is Official while you’re artificial / Break you down to your very last participle / Let me enlighten you, cause your third eye’s on dim / Me gettin taken out is rare like a smile from Rakim”

The instrumental on this track is just off the hook. The bars female guest emcee Indeed spits are dope too, and Pos kills it as usual.

NYC gave you the ball, so how you gonna hate us? / We creators of them East coast stars / If you ask me I’ll tell you there’s no comp / But I’m still humble, even though I will crumble halls…”

Just one of the dope tracks from the best Hip Hop album of 2004: The Grind Date. Wow, how that album was slept on – real Hip Hop just couldn’t get the spotlight in an era when Hip Hop was seriously being watered down and controlled by the big money people intent on turning out ugly factory rap. “Verbal Clap” is straight Hip Hop – fire lyrics and a banging beat by J Dilla.

“I’m gonna let you know, once again, that De La Soul / Is sure to show you we will hit the charter harder / Than the normal rappin fool…”

On their third effort Buhloone Mind State De La was just as creative and versatile as one their previous two, resulting in yet another classic album, albeit with a little less commercial appeal and less radio-friendly tracks. However, this track is a mellow and subtle tribute to Hip Hop that you can listen to all day, every day.

“Up in them five starr tellies sayin two mic rhymes / Be them average emcees of the times / Unlike them, we craft gems / So systematically inclined to pen lines / Without sayin’ a producer’s name all over the track…”

Another dope track from De La Soul’s underrated seventh album The Grind Date, this one sports some dope beats created by slept on producer Jake One and dope rhymes by Pos and Dave, with some especially epic bars by guest emcee MF DOOM.

The first single from their first album 3 Feet High & Rising – released in 1988, before the album release in 1989. Clever lyrics, dope beat – just one of the gems on their classic debut.

“I’m the most from the coast of the Eastern flav / Droppin more knowledge than litter, on the New York pave’ / It’s me, Wonder Why, in the place to be / Certified as superior MC / While others explore to make it hardcore / I make it hard for, wack MC’s to even step inside the door / Cause these kids is rhyming, sometiming / And when we get to racing on the mic, they line up to see / The lyrical killing, with stained egos on the ceiling…”

Just one of the many excellent tracks from their 1996 masterpiece Stakes Is High. Like “Big Brother Beat”, another stand-out track from Stakes on which a young Mos Def tears it up, on “The Bizness” it is Common who comes in to lyrically shine beside Pos and Dave. On 2004’s The Grind Date, De La and Common would do another collabo on “Days Of Our Lives” that was almost as hot as this one.

“Five days you work / One whole day to play / Come on everybody, wear your roller skates today…”

The first single and one of the more light-hearted tracks from De La Soul Is Dead with guest vocals of Q-Tip and Vinia Mojica. Feel good Hip Hop at its finest.

“Now when Tribe, the Jungle, and De La Soul / Is at the clubs our ritual unfolds…”

“Nah, no my brother / No my sister / Try to get hip to this / Word, word to the mother / I’ll tell the truth so bear my witness / Fly like birds of a feather / Drugs are like Pleather / You don’t wanna wear it…”

The best track on 3ft High? Impossible to call, really – but this one has everything that made De La Soul’s debut the seminal classic that it is. Positive and ultimately uplifting, this song is an anti-drugs message presented with clever rhymes, over a dope instrumental with crazy creative sampling (gotta love what producer Prince Paul did with Hall & Oates’ “I Can’t Go for That”).

This sharp parody of gangsta rap made rappers like 2Pac (who may or not be meant to be the rapper in the pool who is ridiculed at the end of the video) take exception. It may just be a question of ‘if the shoe fits’ – what is clear though is that De La Soul had no need nor patience for tough-guy posturing and bling-bling gangsta rap antics. Sonically the track is awesome too – and with the lyrics interpolating a bunch of classic Hip Hop songs, it is a trip down memory lane for those in the know.

“She had the curves that made you wanna take chances / I mean on her, man, I’d love to make advances / I guess her father must ‘a got the same feelin’ / I mean, actually findin’ his own daughter Millie appealing / At the time no one knew but it was a shame / That Millie became a victim of the touchy-touchy game…”

A chilling story about child abuse and its possible tragic consequences, this dark track is one of the highlights of the all-around brilliant De La Soul Is Dead album.

Another one of De La Soul’s scathing attacks on what they perceived as an ongoing decline in Hip Hop music and Hip Hop Culture. As relevant – if not more relevant – today as it was twenty years ago, this track turned out to be highly prophetic and stands as one of the staples of De La Soul’s discography.