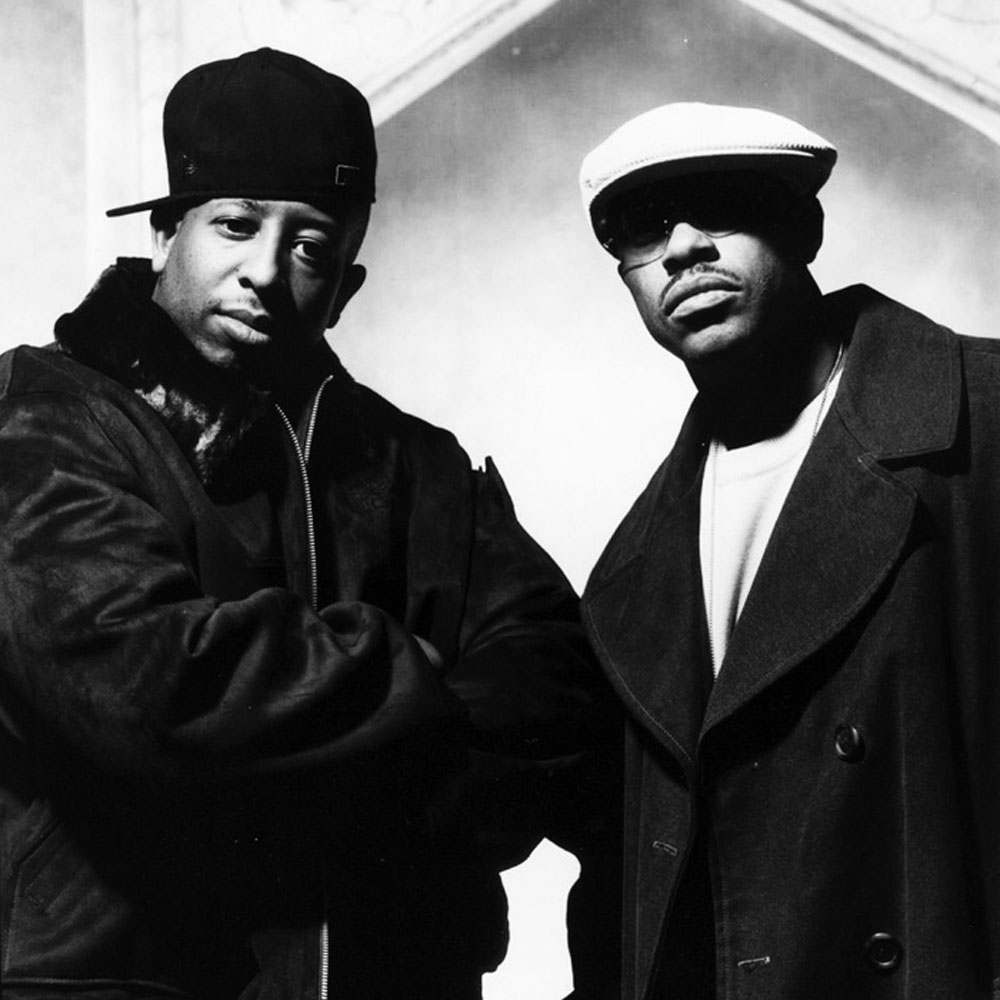 Arguably one of Hip Hop’s best acts on both musical and lyrical fronts, Gang Starr left us with a discography of incredible consistency and superior quality. Picking 15 tracks out of that body of work will inevitably leave out a couple of dozen tracks that could have also easily made anyone’s top 10. For this list, we have selected our top 15 Gang Starr songs. More than with any other list we have compiled we realize that selecting only 15 of Gang Starr’s songs can never do justice to their work. Unlike with most artists, Gang Starr’s albums rarely have any real stand-out tracks – because the WHOLE albums stand-out. So: if you miss YOUR personal favorites in this list, don’t be mad, no doubt we love those tracks too. With that being said, here we go…

“I profess and I don’t jest cause the words I manifest / They will take you, sedate you, and I will stress upon / You the need for, you all to feed your / Minds and souls, so you can lead yourselves / To peace…”

For those of us who were down with Gang Starr since day one, this track – and the rest of 1989’s No More Mr Nice Guy – will always hold a special place.

“The beat is sinister, Primo makes you relax / I’m like the minister, when I be lacing the wax / I be bringing salvation through the way that I rap / And you know, and I know, I’m nice like that”

The first track off of Gang Starr’s fifth album and masterpiece Moment of Truth. Typical subject matter for Gang Starr: Guru explains what Gang Starr and real Hip Hop is all about.

“I make the moves, I’m never faking / Cause the loot is for the taking”

From the 1992 Trespass movie soundtrack, Gotta Get Over is a dope track that did not appear on a Gang Starr album until the monumental Full Clip: A Decade Of Gang Starr compilation album in 1999.

“We’ll come together so that we become / A strong force, then we can stay on course / Find your direction through introspection / And for my people out there I got a question / Can we be the sole controllers of our fate? / Now who’s gonna take the weight?”

Gang Starr sophomore album was so consistent, that we could have picked almost all of the 18 tracks for this list. No skippable tracks on Step In The Arena. This one is a particular favorite, though. It showcases all that Gang Starr is about: Guru’s consciousness and lyrical skill and DJ Premier’s superiority as a producer and as a DJ. Dopeness.

“Yo, I don’t even want to fight with you man / I’ll lay you right where you stand…”

Rite Where U Stand is just one of the many stand-out tracks from Gang Starr’s last album, the 2003 The Ownerz. Another brilliant Premo instrumental, with Guru and guest Jadakiss coming correct on the mic.

“Face defeat to this beat, you can tell I’m into it / As I’m pullin out my lance, to kill you and advance to / The winner’s throne; cause I own you once you step in the arena”

Laidback and rough at the same time, the title track of Gang Starr’s second album is the perfect opening song. It confidently sets the tone for the rest of the album, and the rest of Gang Starr’s career – with Premier’s trademark brilliance on the boards and Guru taking on inferior emcees, visualizing emcee battles as gladiator fights.

“Fresh out the gate again, time to raise the stakes again / Fatten my plate again, y’all cats know we always play to win…”

One of the new tracks from the masterful double disc selection Full Clip: A Decade Of Gang Starr. Just as brilliant as all of their previous work, Full Clip is yet another Gang Starr banger.

“Whether you die or kill them, it’s another brother dead / But I know you’ll never get that through your head / Cuz we’re misled and misfed facts, we’re way off / Killing you and killing me, it’s the soliloquy of chaos”

Guru’s lyrics are thoughtful and deep, and the track is made even more heartfelt by Premo’s brilliant musical backdrop. Can there be any discussion about DJ Premier’s status as one of the three best Hip Hop producers ever?

Just To Get A Rep is a cautionary tale about a kid getting caught up and ultimately falling victim to crime. Similar to BDP’s Love’s Gonna Getcha the song tries to show that the all-out pursuit of money and material things may ultimately lead to your downfall. A poignant message over a great beat – this is what Hip Hop is all about.

“They say it’s lonely at the top and whatever you do / You always gotta watch motherf***** around you / Nobody’s invincible, no plan is foolproof / We all must meet our moment of truth”

Step In The Arena is Gang Starr’s best album right? Or Daily Operation? What about Hard To Earn? And Moment Of Truth?

In most artists oeuvres it’s easy to pick a best album, not so in the case of Gang Starr. All classics, the Moment Of Truth album simply is the continuation of the brilliance we came to expect for Guru and DJ Premier. The titular track is just one of the excellent tracks on Gang Starr’s fifth album, with Guru dropping his usual wisdom over another classic Premo instrumental.

“They might say we’re a menace to society / But at the same time I say “Why is it me?” / Am I the target, for destruction? / What about the system, and total corruption?”

This classic cut – much like the rest of Gang Starr’s fourth album Hard To Earn – is real, uncut, East Coast Hip Hop at its best.

“Well goodness gracious, let me just take this / time out to pull a rhyme out, and update this / For you and yours, simply because / Some MC’s have luck but suck…”

Upon its release early in 1991, Step In The Arena truly was a groundbreaking album production wise and artistically. Flawless from beginning to end, and super tight (no guest spots, no redundant skits) – Step In The Arena will forever stand as a landmark album.

Take A Rest is one of the stand-out tracks on a stand-out album, in which Guru verbally attacks wack, sell-out rappers, as he would do in many more songs to come.

“I Self Lord and Master shall bring disaster to evil factors / Demonic chapters, shall be captured by Kings…”

Ah, Above The Clouds… Is this not one of the most creative Hip Hop beats ever? Combined with stellar lyrical performances from Guru and especially Wu Tang Clan‘s wordsmith Inspectah Deck, this is not only one of Gang Starr’s best tracks, but one of Hip Hop’s best tracks. Legendary.

In this song Guru takes a stab at wack artists and former friends, recurring themes in his lyrics. One of the best tracks from Gang Starr’s third album Daily Operation, the album where Premo and Guru seemingly effortlessly continue the high standard they set with their groundbreaking sophomore album Step In The Arena.

“No way, you’ll never make it / Come with the weak sh**, I’ll break it / Step into my zone, mad rhymes will stifle ya / Lines like rifles go blast when I kick some ass…”

Gang Starr always had that straight up, real hardcore Hip Hop. In this classic joint from their fourth album Hard To Earn, they address sell out artists who are willing to compromise their sound and themselves for chart success. The quintessential Gang Starr track.