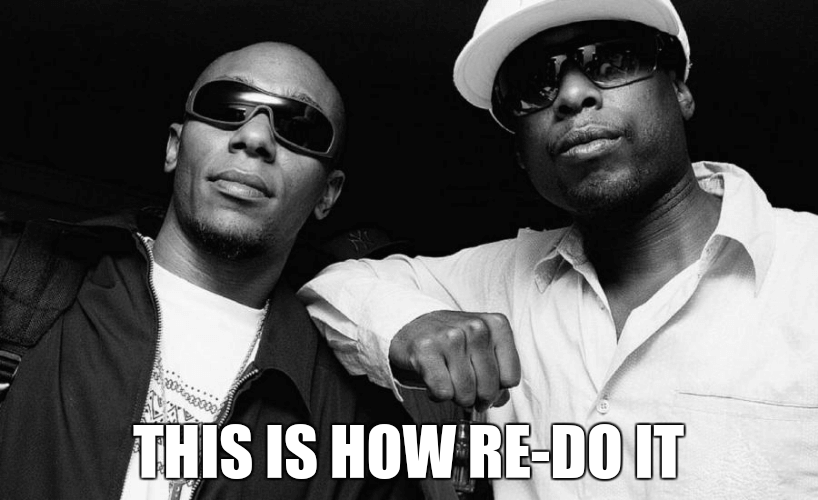 8 Dope Hip Hop Remakes: Some tracks are so good, you just can’t help but do it yourself.

First up is one of Boogie Down Productions’ hitters off their Edutainment album, performed by none other than X to the Z. Considering BDP’s extensive amount of classic tracks, you’d think X would have gone with a more popular one. Thankfully he realized the same thing that I did when I first heard KRS rip this one: Kenny Parker knows how to hook a track UP.

I could have easily gone with his smoothed out version of La Di Da Di, but this reharsh of Biz Markie’s hit has a lot more flavor. Effortlessly rapping over a beat that seems like it was made for the layback Long Beach MC, Snoop does an outstanding job altering the lyrics just enough to match his crew’s ascension into Hip Hop glory.  Snoop is fly as hell on this one.

Who the hell would DARE remake an NWA track, let alone their signature one??  Why, none other than other Compton legends. MC Eiht is in full “g’yeah” mode, King Tee does his usual triflin’ greatness, and Eazy-E’s homie Dresta goes buckwild in Eazy’s place.  A fitting homage, legends to legends.

Pharoahe Monch - Welcome To The Terrordome

If you going to have the discernment to remake a Public Enemy song, you better have a ridiculously commanding voice. Pharoahe Monch has that in spades, making Chuck D proud with his booming vocals. The wall of sound backing him up is definitely a nice twist on the Bomb Squad’s original classic beat.

Watching this video, it’s obvious that Erick Sermon, Redman, and Keith Murray have WAY more fun than the average person. It made perfect sense that the squad remade this classic from the Sugarhill Gang. Man, it’s hard not to take this version over the original. This track is what I call “instant happiness”. Just try to listen to Funk Doc’s first line and not have a smile on your face.

What, you thought hip hop songs needed rhymes? The hell you say. This banger from the classic movie Breakin’ 2: Electric Bugaloo is as raw as it gets, folks. Considering the musicality of the one and only Hip Hop band, this was a perfect track for the Roots to remake.  I don’t know what George Kantz was on back in the 80s, but he made a timeless track that will always be a part of Hip Hop.

Yo!  Didn’t see this one coming AT ALL. Sure, Big Pun is a beast on the mic, and Joey Crack always brought his game up when partnered with the deceased legend, but hot damn this was a fire rendition. The original Dr. Dre/Snoop Dogg track will forever be a classic, but even they had to “feel it” hearing Pun and Joe lose their minds over their bullets & basslines beat.

THIS is how your remake a song.  Leave it up to Mos Def and Talib Kweli to take an untouchable classic, flip it and make a totally different sounding song while keeping the original dopeness intact. I’m not even sure how this track works, considering how different it is. Whatever.  Black Star can do no wrong apparently.  Knock ‘em out the box, Mos.