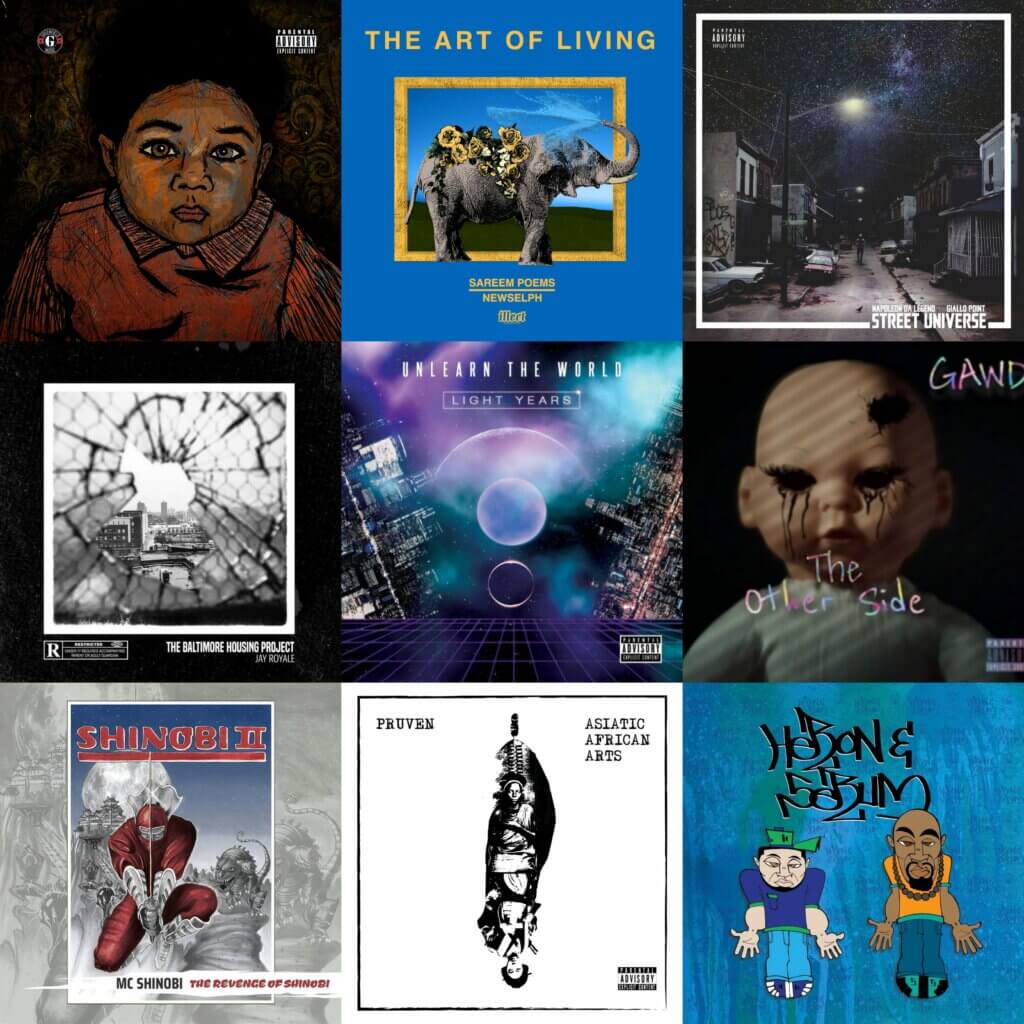 It’s not easy to keep track of all the Hip Hop albums that are dropping every single week. Mainstream albums, or high-profile underground releases, will get plenty of exposure no matter what – you will have taken note of the release Marlowe’s excellent Marlowe 2 (the best Hip Hop album released in August) and of Murs and Slug’s dope Felt 4 U, and you will not have missed Nas’ good (but not great) King’s Disease, but the oversaturation of the market makes it possible for really good albums to slip through the cracks of attention. For this piece, we have selected 9 recently released Hip Hop albums deserving of attention, 9 albums that even real Hip Hop heads will most likely sleep on otherwise. 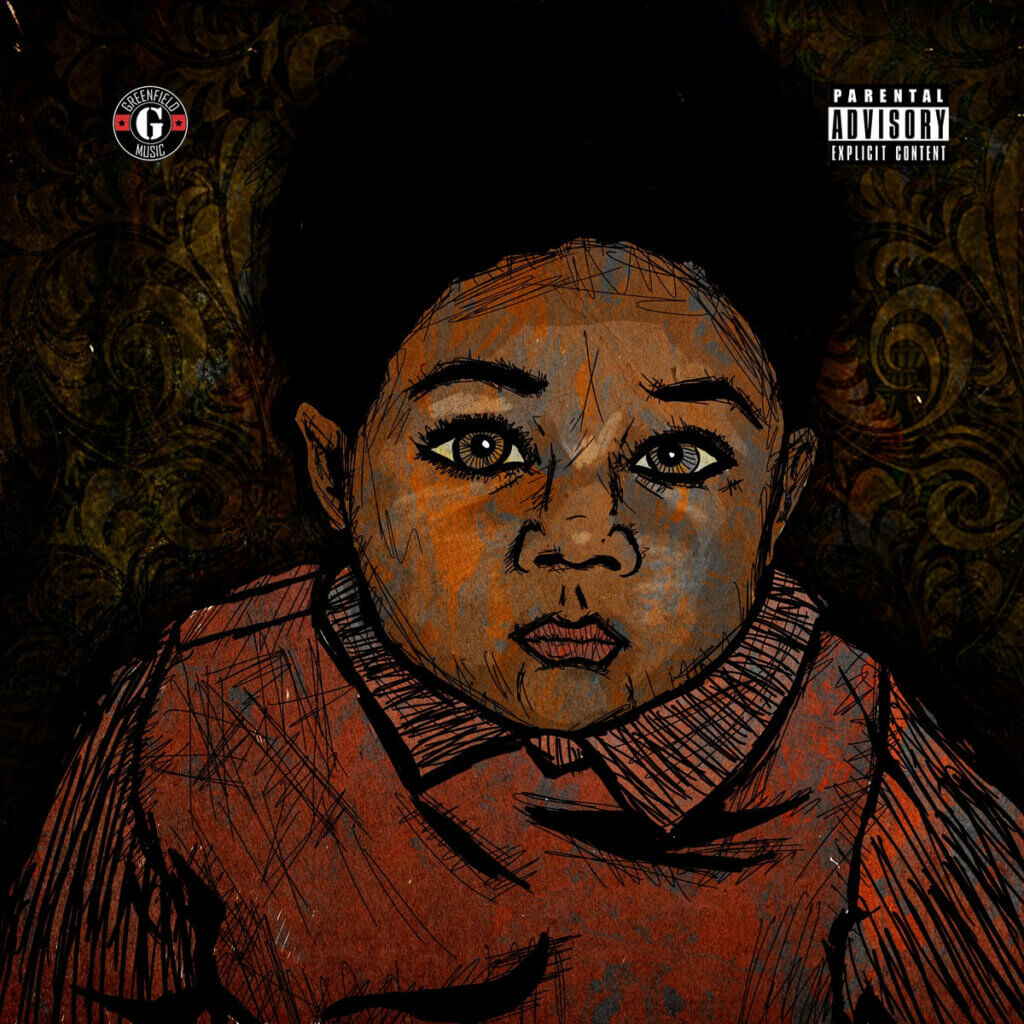 Recognize Ali is one of the most prolific emcees in the game these days. He is one everybody’s album as a featured artist, and Recognition is his third full-length release of the year – following the solid Duelling Experts project (as Duelling Experts, with Verbal Kent), and the boom-bap banger Guerilla Dynasty, a collaborative project with producer Stu Bangas.

Recognition arguably is the best of the three, better than the decent but kind of one-note Duelling Experts album, and musically and lyrically deeper and more interesting than the excellent but more straightforwardly boom-bap content of Guerilla Dynasty. At 55 minutes Recognition is also Recognize Ali’s longest album of the year so far, refreshing in an era where a lot of artists are happy to release a string of barely 30-minute long projects and call them albums.

Recognition has production from the likes of Brisk Fingaz, C-Lance, B-Sun, Sultan Mir, Karnate, Hobgoblin Beats, Brian Burns, Crystal Camino, Vago, Bar Code, JBL The Titan, K. Sluggah, and Tone Spliff – but despite the number of different people crafting the beats, the album manages to sound entirely cohesive. Recognize Ali holds down about half of the songs on the tracklist by himself, for the rest he recruited a who’s who of underground rap – Vinnie Paz, Verbal Kent, Planet Asia, Shabaam Sahdeeq, Ill Bill, Tragedy Khadafi, Ruste Juxx, Reef The Lost Cauze, King Magnetic, Bronze Nazareth, Napoleon Da Legend, and others, make appearances to give some extra weight to this album. 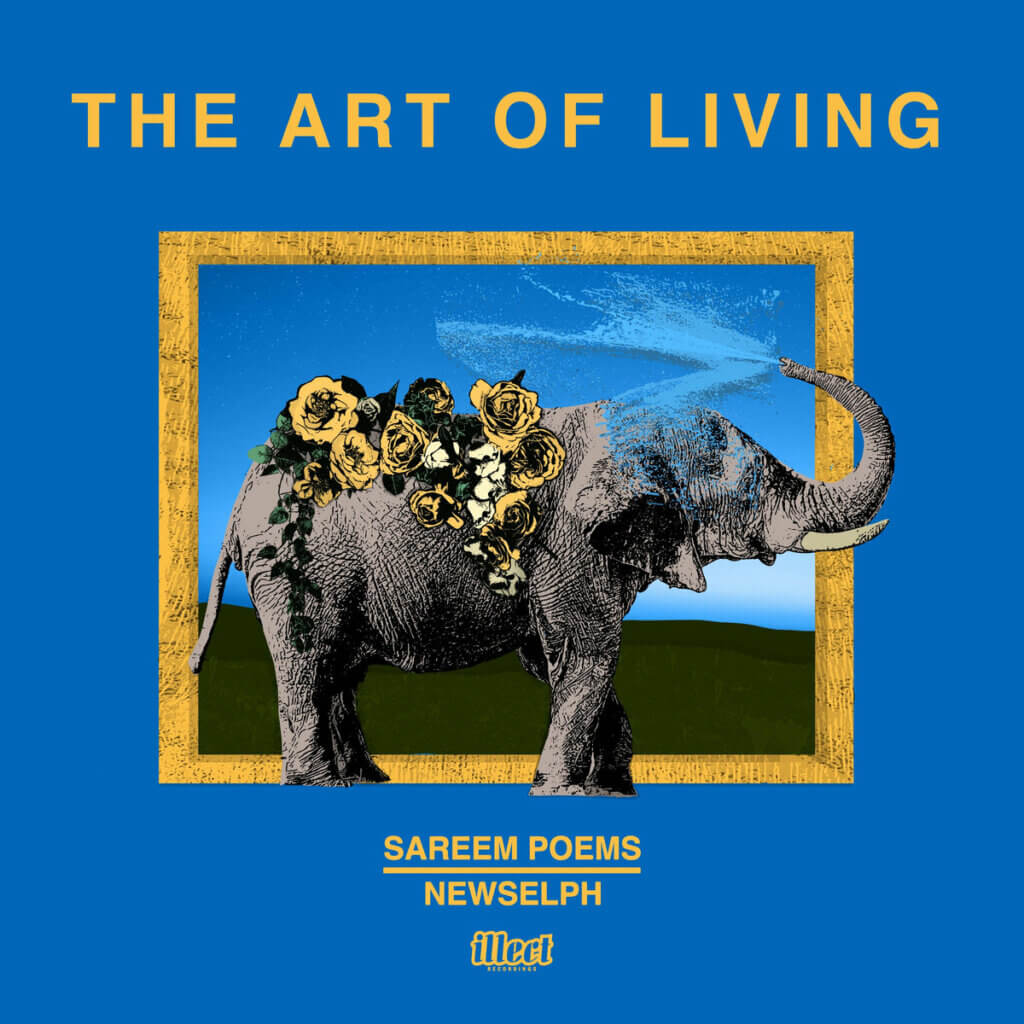 Following their 2019 collaboration 88 To Now, Michigan-native Sareem Poems and Newselph (from Alberta, Canada) teamed up again to drop this delightful little project. Smooth production by Newselph and thoughtful lyrics by Sareem Poems make The Art Of Living a slow-burner of an album, one that gets better with every listening. In these troubled times, it’s refreshing to get an album to has a positive vibe about it – Poems lyrics are generally uplifting and Newselph’s jazzy and soulful boom-bap beats help to set the stage for Poems’ poetics. The Art Of Living is on the short side at 34 minutes, but this is one to keep on rotation anyway. 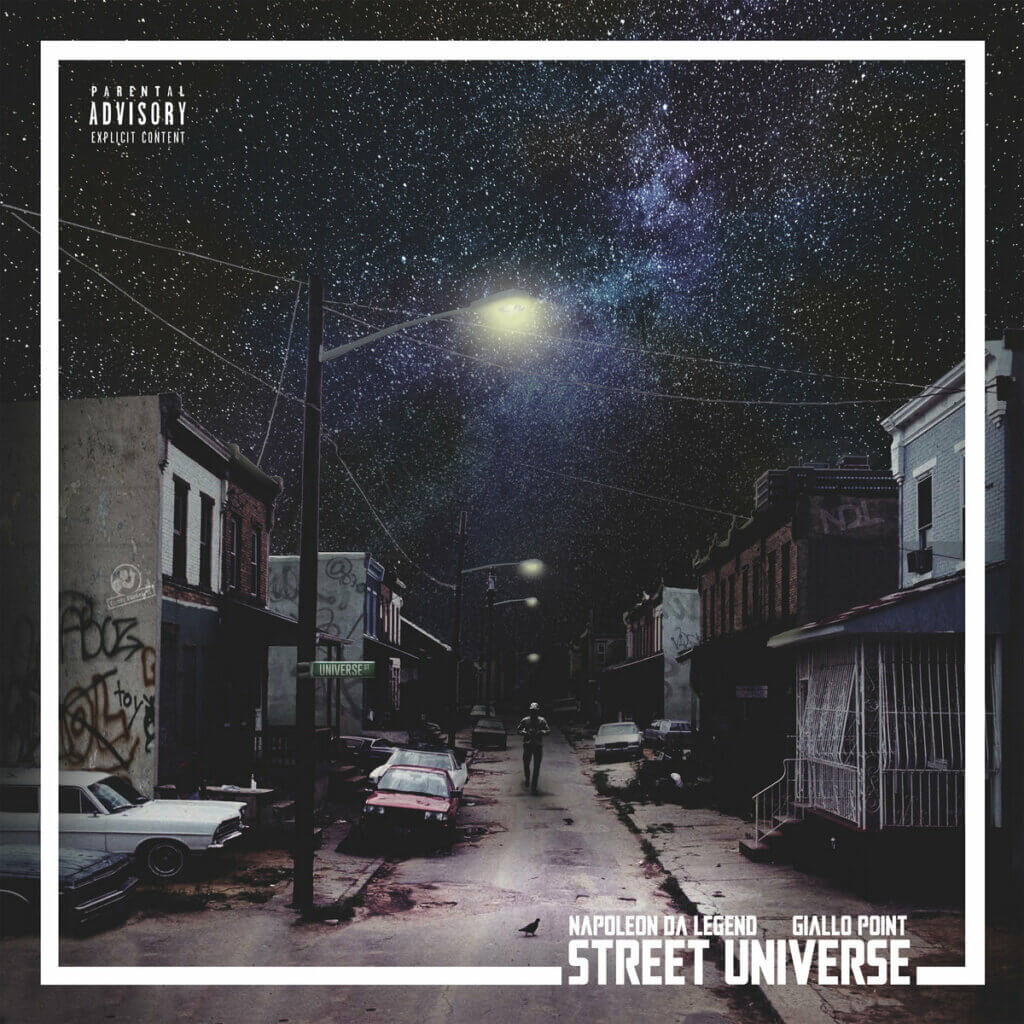 Another album from the prolific Paris-born, Comoros Islands and Washington DC raised, Brooklyn-based artist Napoleon Da Legend, this one a continuation of his collaborations with UK-based producer Giallo Point – following the solid Coup D’État (2018) and the decent (but compared to its predecessor slightly disappointing) Coup D’État 2 (2019). Street Universe is on par with the first Coup D’État.

Giallo Point has been one of the more interesting producers in the game for a long while, getting more and more recognition in recent years through his international collaborations. His collaborative album with Los Angeles rapper D Strong – Suitcase Full Of Gunz – remains the strongest albums this year with his name on the cover, but Street Universe is pretty good too. The chilled-out beats suit NDL’s lyrics, and there’s little to none skippable material here. At 36 minutes, Street Universe is short, but sweet. 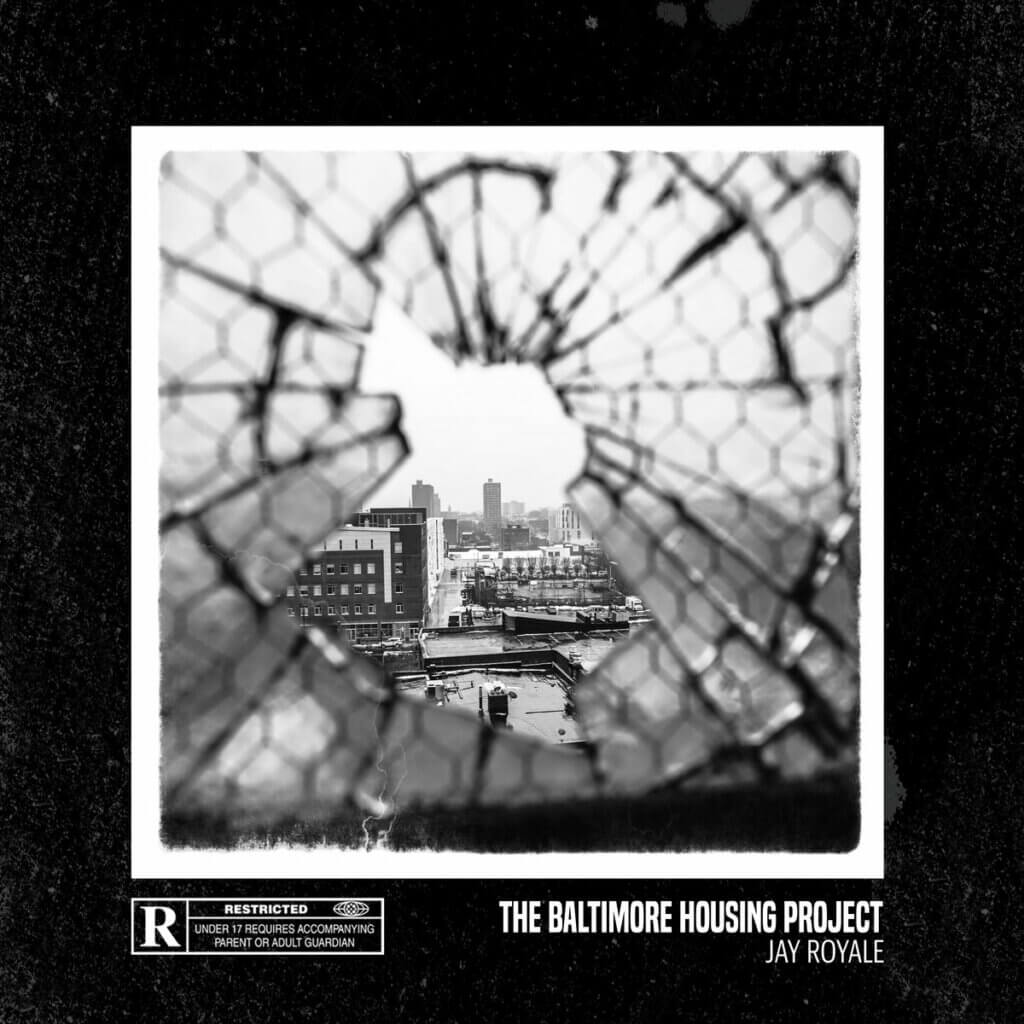 The Baltimore Housing Project, the sophomore full-length LP from Baltimore emcee Jay Royale, is a surprisingly good album for such a low-key release. It’s clear where Jay Baltimore’s inspiration comes from – this album wears influences by classics like Raekwon’s Only Built 4 Cuban Linx and Nas’ It Was Written thin on its sleeve.

While Jay Baltimore is no Raekwon or Nas, he is a competent enough emcee, and The Baltimore Housing Project is a more than decent 90s-centric street rap album with solid production by the likes of Ray Sosa and J Soul (among others) and entertaining rhymes by Jay Royale and guests like Skyzoo, Termanology, Ill Conscious, and Ransom. Nothing you haven’t heard before on The Baltimore Housing Project, but if 90s-type mafioso rap is your thing, this album is a must-listen. 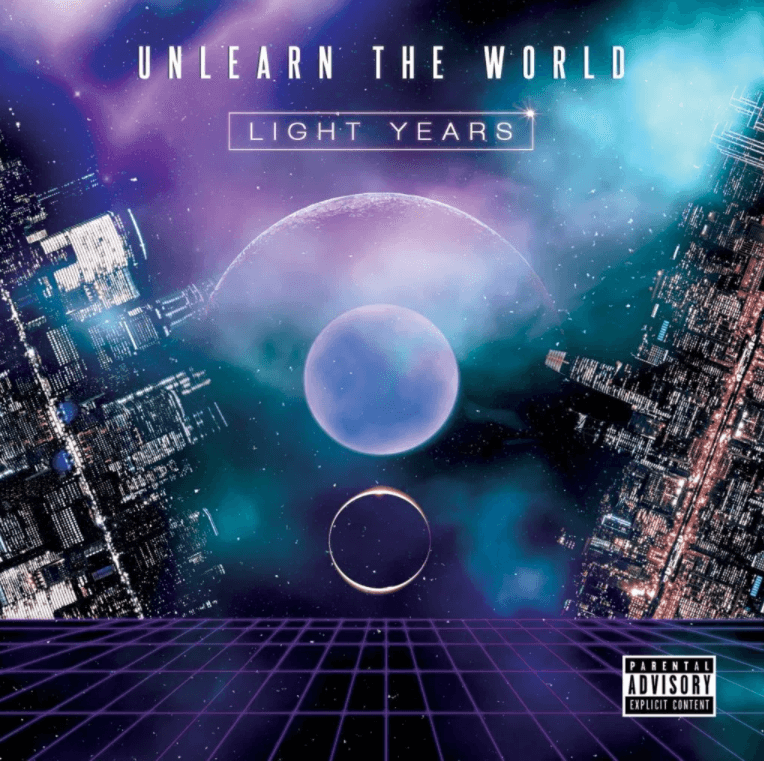 Light Years is NYC-raised and San Francisco-based emcee/producer, UnLearn The World’s latest project, and arguably his best work yet. On this album UnLearn The Wolrd speaks about his personal history, and on topics like the rap game, society, love, fatherhood, religion, and more. If you have never listened to Unlearn The Word before, now it’s time to get up to speed. His lyrics are worth listening to, and his flow and delivery are dope, different enough from most others to give his vocals a distinctly unique vibe.

Light Years is mostly self-produced, and Unlearn The World’s work on the boards is as admirable as his intricate wordplay is. The album runs for close to an hour and contains 16 smooth and soulful tracks, on which trap and boom-bap influences are expertly blended into a new sound. Great beats and great lyrics: Light Years is a great album.

Gawds - The Other Side 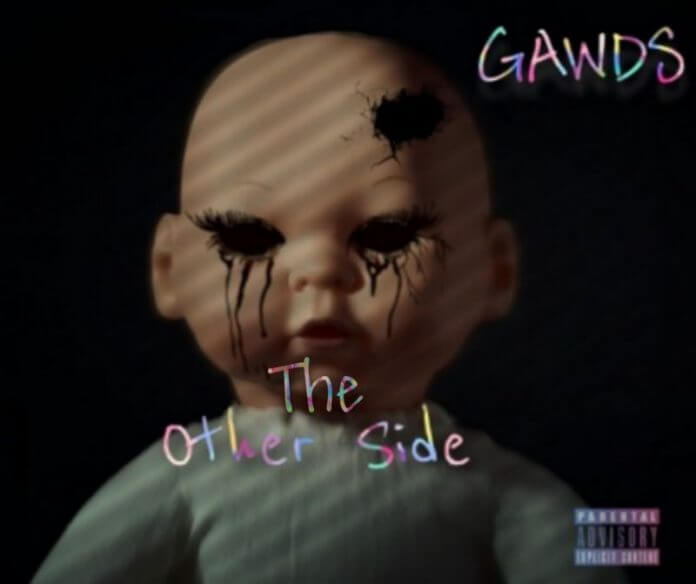 GAWDS ( Going At Whoever Don’t Surrender) is a crew forged in 2016 by Regulus and Pinpoint, two Baltimore-based emcees, and renowned DJ Rocky Styles. It’s good to see there are still artists out there willing to buck the trend that has artists going for a series of quick quantity-over-quality EP releases (everything to stay in the public’s eye as much as possible), instead opting for the good old-fashioned long-format listening experience. GAWDS knows how to do it – The Other Side offers 18 tracks, a full hour of dope music.

The Other Side is pretty good, admirable at the least for doing something different than everybody else is doing. On this album, we get an unorthodox blend of styles and it turns out to work wonderfully well. From traditional boom-bap to alternative, to jazz-hop, to hardcore rap, to 50 Cent like hooks, to the emo the cover art promises – this album cannot be pigeonholed and it is better for it. The Other Side is entertaining from start to finish – with interesting beats and samples, and lyrics worth listening to. Don’t sleep on GAWDS.

MC Shinobi - The Revenge Of Shinobi 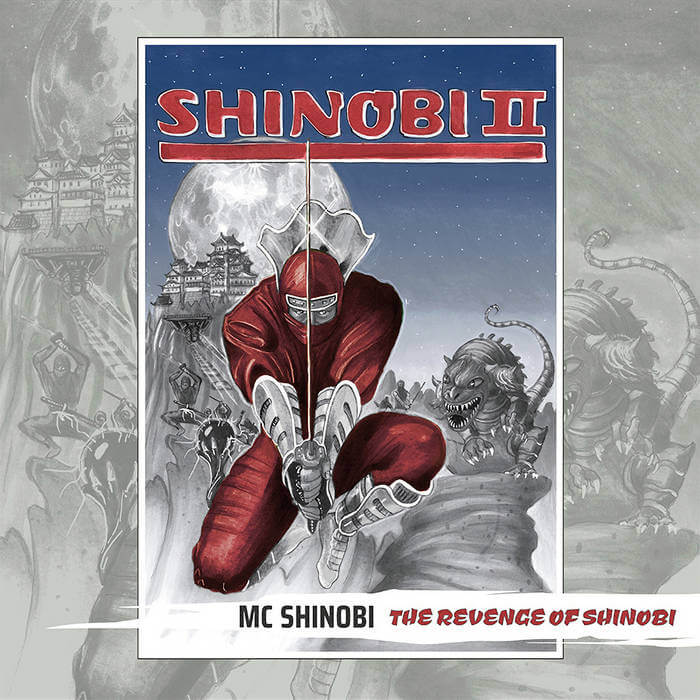 Nice one. Phoenix, Arizona rhymer MC Shinobi comes with one of the better 90s-centric boom-bap albums of the year. The Revenge Of Shinobi sounds likes it came straight from Pete Rock’s playbook, or maybe from DITC’s Showbiz’s – the horns-infused beats laced with samples from 90s Hip Hop classics take the listener straight back to 1992.

“For the Golden Age of Hip Hop I have to give a bow”, MC Shinobi says on “1520 Sedgwick Ave” (Hip Hop fans will know the significance of that address). DJ Obsolete, DJ DareDevil, B.B.Z Darney, Soe95, Q-Knight, and MPadrums provide musical backdrops Pete Rock will approve of, and Shinobi has the skills to do the beats justice. His 90s-type flow and delivery suit the instrumentals, and although there’s nothing especially memorable here, The Revenge Of Shinobi is a consistent and above-average addition to the ever-growing collection of boom-bap renaissance albums we are treated to lately. 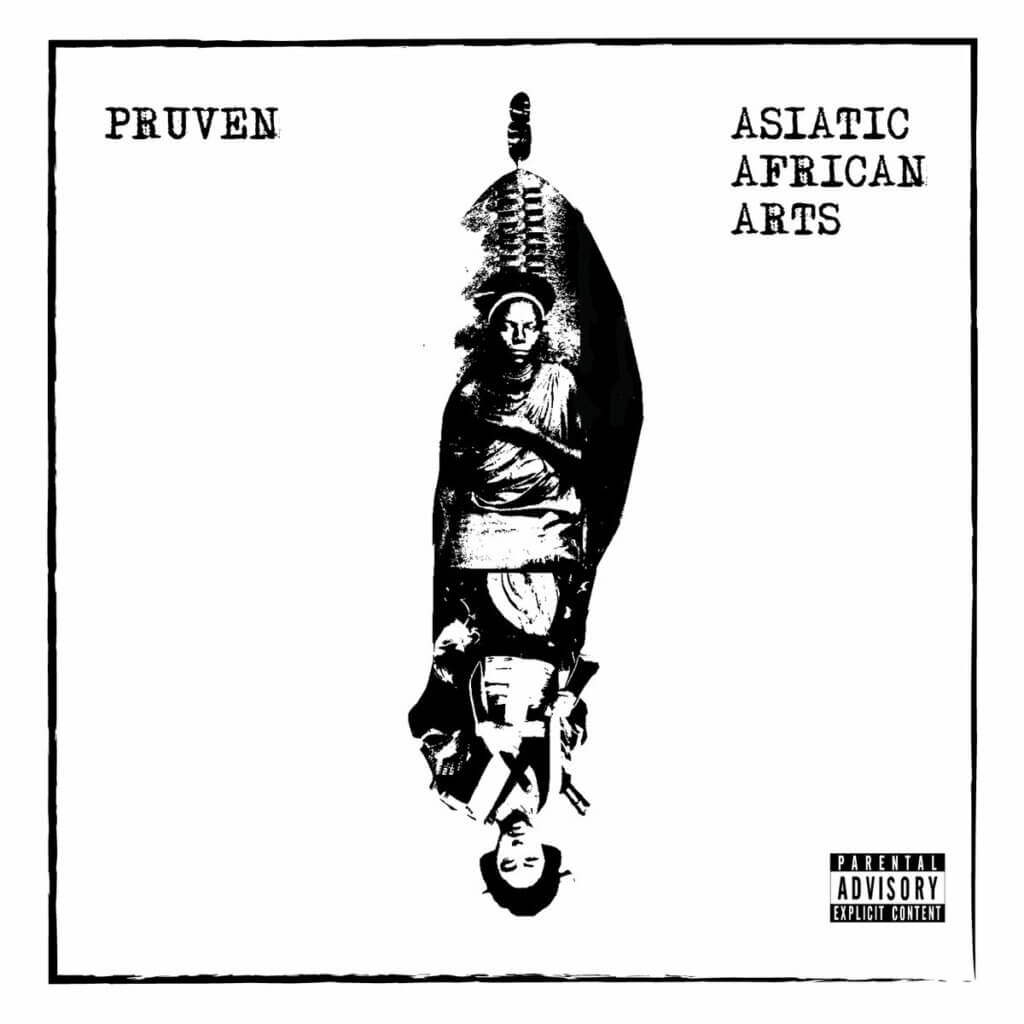 Asiatic African Arts is Bronx-by-way-of-Connecticut emcee Pruven’s second full-length project this year. Clandestine Rituals dropped earlier this year and it arguably is Pruven’s best yet – a lyrically deep, sonically layered, and generally well-rounded album. Asiatic African Arts is another interesting release, lyrically and musically just a little less impactful than its predecessor. As is the case with all Pruven projects, Asiatic African Arts requires multiple listens to fully appreciate its lyrical and musical intricacies – a Pruven album is never easy or straightforward. But it doesn’t have to be – those who are willing to invest the time and attention an album like this demands and deserves will be amply rewarded. 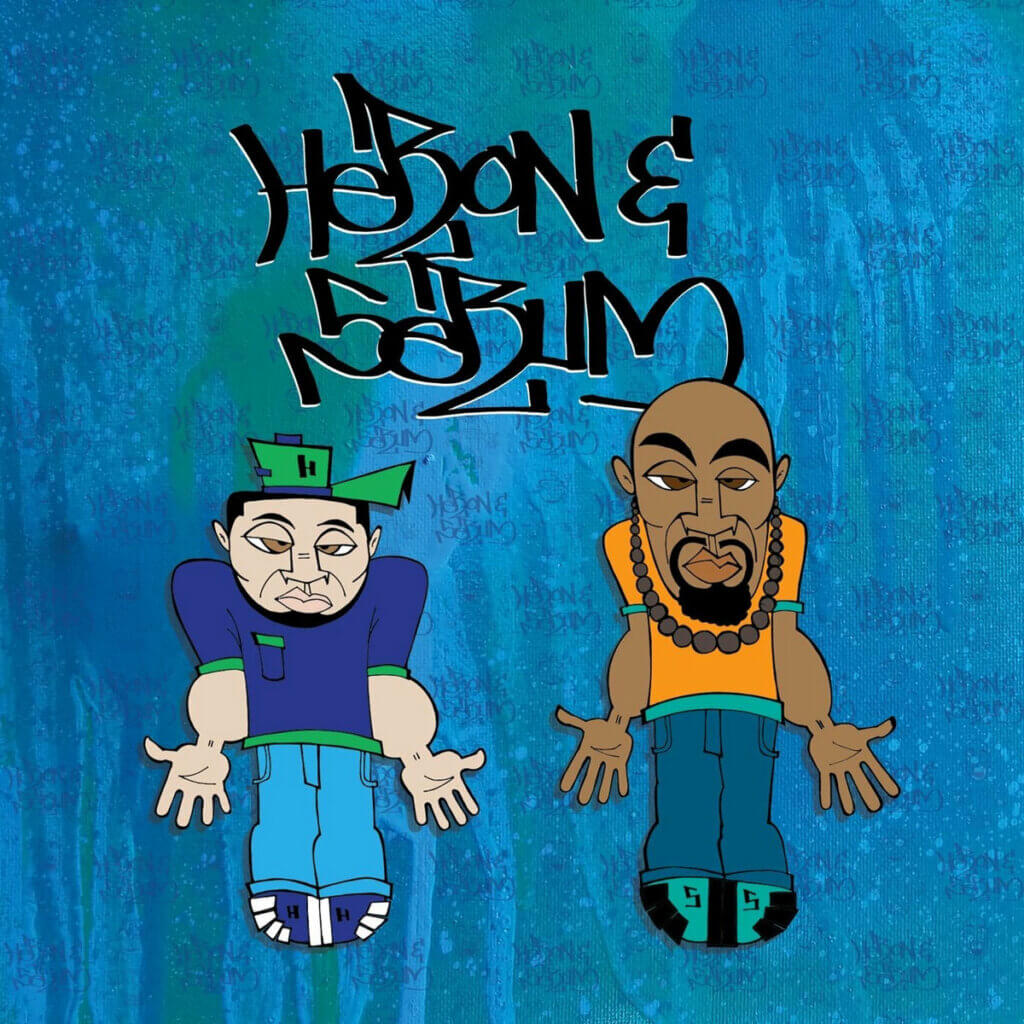 Miami residents DJ Heron and renowned battle rapper and graffiti artist Serum teamed up for their straightforwardly titled collaborative debut: Heron & Serum. The duo will not go and win any originality prices with this nostalgic piece of work, but that’s probably not what they set out to do.

Heron & Serum should be appreciated for what it is: a delicious Golden Age flavored project with a tightly produced selection of beats and scratches by Heron and enjoyable wordplay by Serum and guests like Shabaam Shadeeq, Reks, Wrekonize, and Graig G (among others). Heron & Serum will most likely gain no traction among the mainstream crowd, but for those stuck in the early 90s, this album is gold.