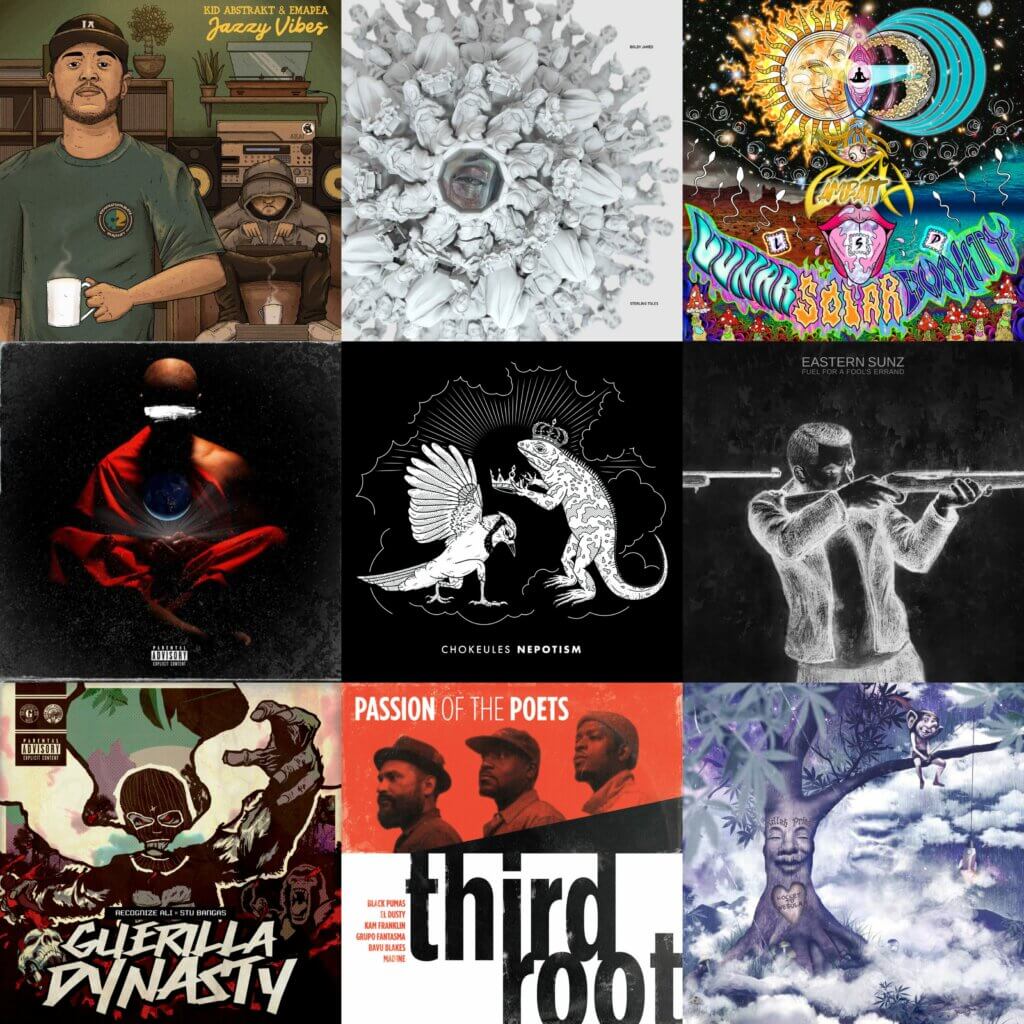 It’s not easy to keep track of all the Hip Hop albums that are dropping every single week. Mainstream albums, or high-profile underground releases, will get plenty of exposure no matter what – nobody will have missed AOTY contender As God Intended by Apollo Brown and Che’ Noir, nor the latest album from Blu & Exile. But the oversaturation of the market makes it possible for really good albums to slip through the cracks of attention. For this piece, we have selected 9 recently released Hip Hop albums deserving of attention, 9 albums that even real Hip Hop heads will most likely sleep on otherwise. 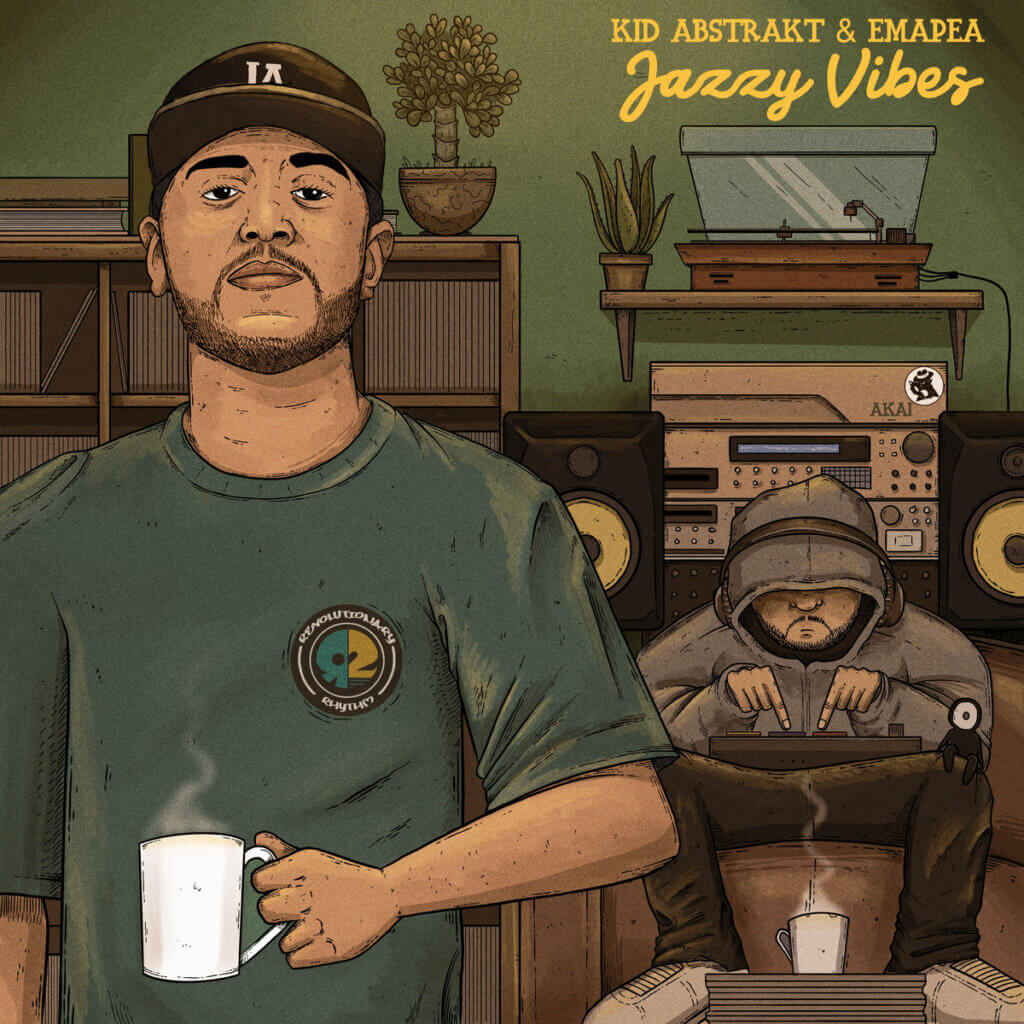 Jazzy Vibes is a 10-track project by Polish beatmaker Emapea and Kid Abstrakt, a member of the group Revolutionary Rhythm from Los Angeles, CA with Predominance & DJ Million Faces. This album is a throwback to ’90s Golden Age Hip Hop with a 2020 spin, with mellow, jazz-infused production and boom-bap style beats, rhymes, and cuts & scratches.

At 32 minutes, Jazzy Vibes is as breezy and lightweight as the title suggests, but the ten tracks we get here all are pretty dope. If jazzy Hip Hop or 90s-centric boom-bap is your thing, Jazzy Vibes is a must-listen. 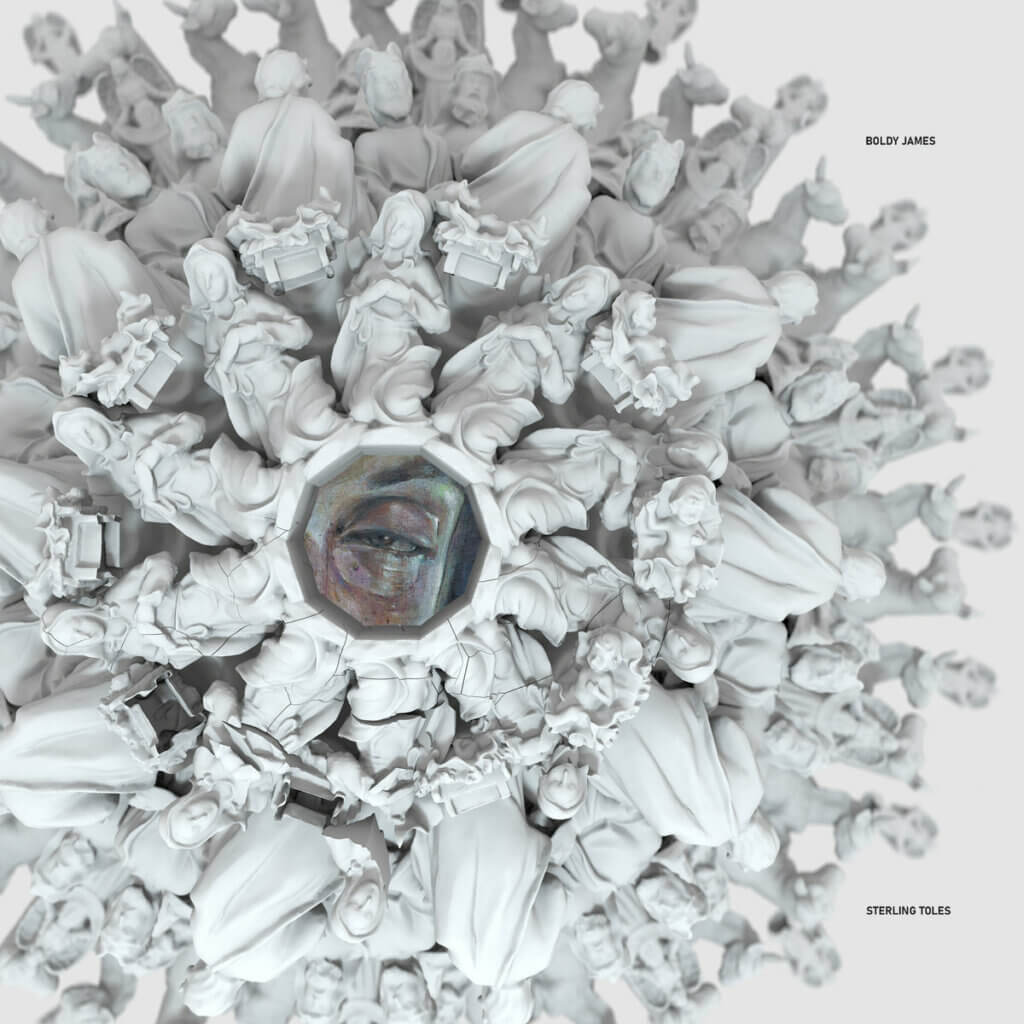 With Manger On McNichols, Detroit emcee Boldy James continues his 2020 winning streak. Only a few months after his collaborative album with top-producer The Alchemist, the excellent The Price Of Tea In China, Boldy James dropped this completely different but equally captivating project.

Manger On McNichols is a release that has been a long time coming, a result of a collaboration with fellow Detroiter and veteran producer Sterling Toles that started over 10 years ago. Much of the lyrics on Manger On McNichols were recorded between 2007 and 2010, with some new lyrics added to a couple of tracks to finish the album for its 2020 release. Sterling Toles provides Boldy James vocals with a selection of experimental jazz instrumentals that make this album much more left-field in sound than James’ albums with The Alchemist. Because of its experimental vibe, Manger On McNichols probably is more of an acquired taste and less likely to appeal to wider audiences than TPOTIC and other Boldy James projects do, but it is an intriguing listening experience that deserves attention. 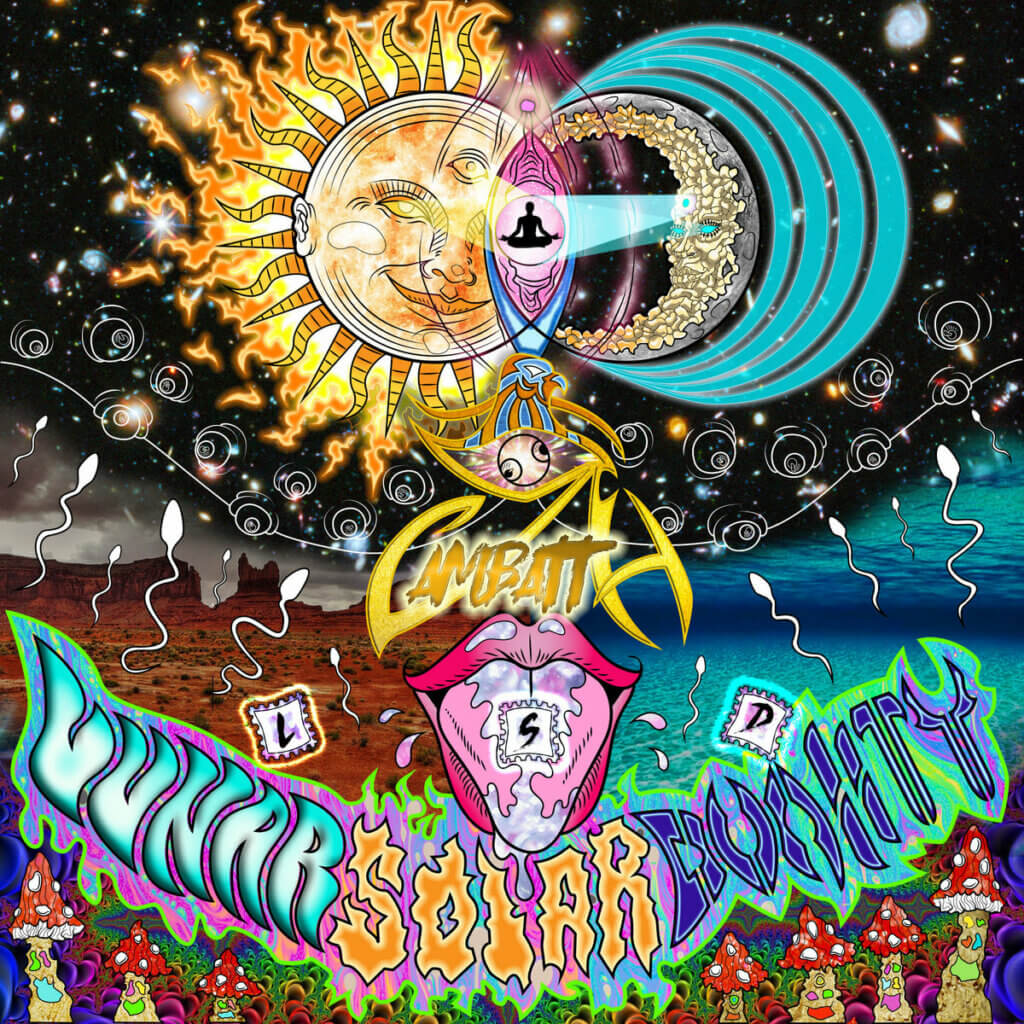 From the album’s Bandcamp blurb:

LSD (lysergic acid diethylamide), is a hallucinogenic chemical compound, first synthesized in 1938. Upon its introduction into popular culture in the 1960’s it quickly shifted not only the mind of the artist but also the person experiencing the art.
Hip Hop artist Cambatta is known for his thought-provoking and psychedelic-inspired rhyme techniques. His newest album entitled, “LSD”, is just as the title insinuates- mind-bending and consciousness-shifting. This album was created throughout four years of psychedelic usage and reality-based life-changing events. This process has made the album a duality of both real and surreal interpretations. The album’s title is also an acronym for “Lunar Solar Duality,” alluding to the album’s dichotomy of light and dark conceptualizations and countless other polarizing and multi-entendre-latent compositions. Whether you have ever experienced LSD or not, this album is sure to impact anyone receptive and perceptive enough to take a dose.

This album sure is a trip, a total mindf*ck. LSD offers well over an hour of dense lyricism, full of Cambata’s musings on subjects like life, history, science, religion, spirituality, mythology, existentialism, culture, and drug(ab)use. The beats on LSD are fine, and Cambatta’s voice and flow are a pleasure to listen to – but what makes this album something truly special are Cambatta’s deep lyrics. His varied lyrical approaches and themes are fascinating – this album can’t really be compared with anything you have heard before. In sound, style, and content Cambatta is like an amalgamation of Killah Priest, Kool Keith, Canibus, Cage, and Immortal Technique – making Lunar Solar Duality a truly unique experience, an album that invites multiple listenings to really try to appreciate what’s going on. This is another Mello Music Group winner. 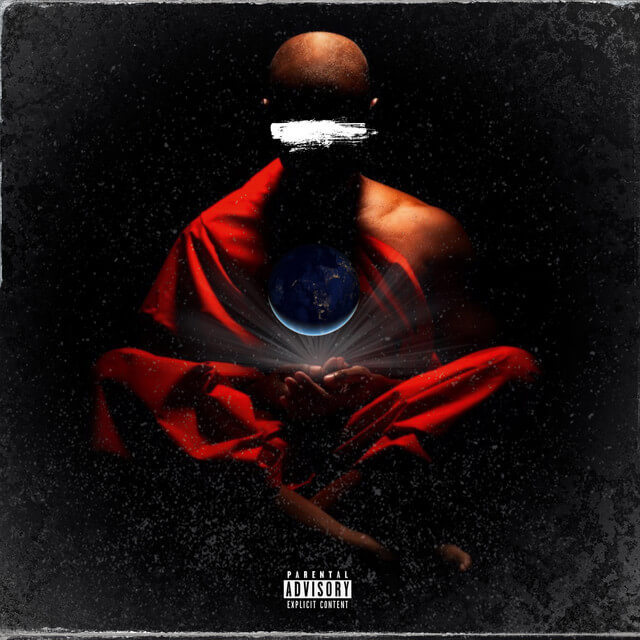 Like Kollab Kong, Den-Bo-Wu is a 90s-centric album with lots of guest artists, but that’s where the similarities end. Where Kollab Kong offered more traditional boom-bap beats and cuts (and a spectacular list of features), Den-Bo-Wu tries to emulate the Wu-Tang kind of sound. The guest list reflects that intention – Wu-affiliated emcees like Killah Priest, Shabazz The Disciple, Bronze Nazareth, Cappadonna, Shogun Assassin, Hell Razah, Shyheim, 9th Prince, and Solomon Childs show up for vocal contributions. Just like Kollab Kong, Den-Bo-Wu is a solid effort. Nothing spectacular or especially memorable maybe, but for those who can’t get enough of 90s-sounding Hip Hop, this project is well-worth checking out – especially for fans of the extended Wu-family this is a must-listen. 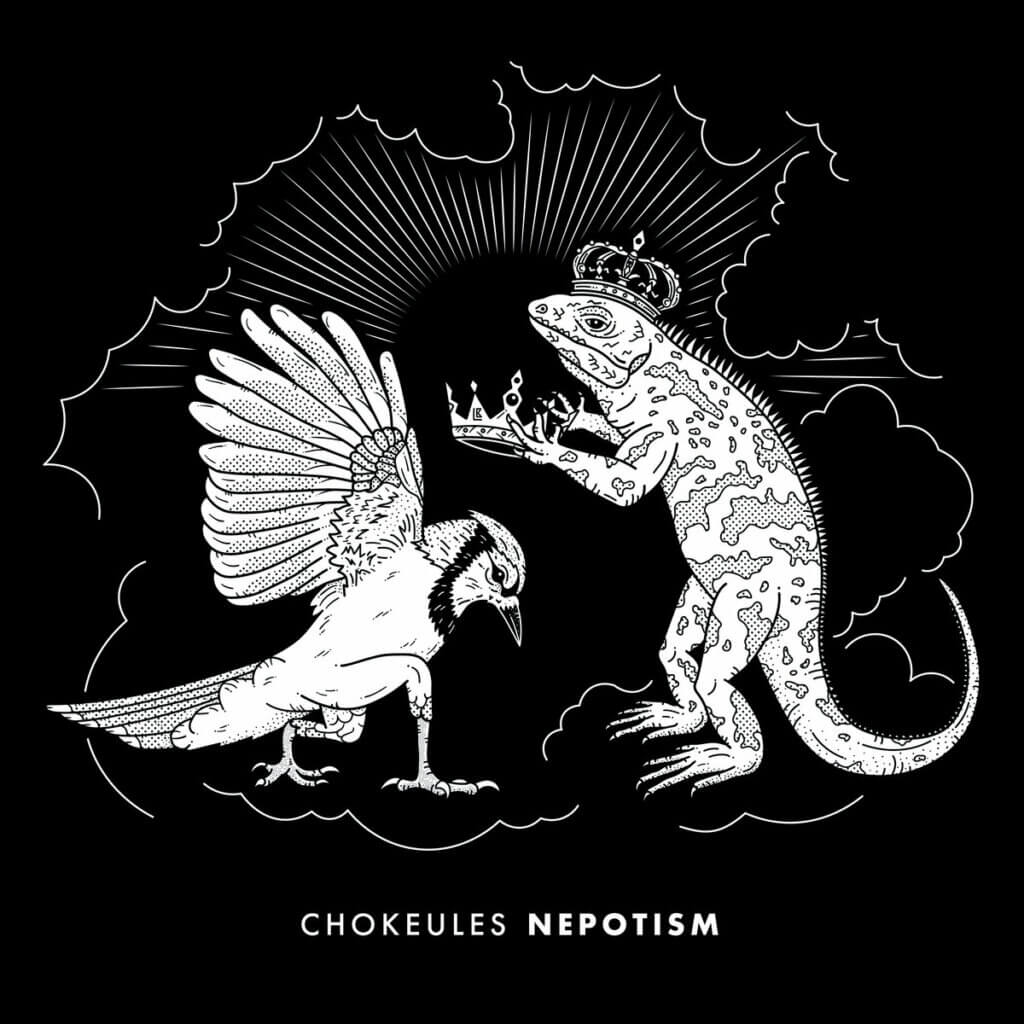 As one-half of Sequestrians, one-third of Swamp Thing, one-third of Toolshed, and one-twentieth of Backburner Crew, Toronto emcee Chokeules has been (co)responsible for a whole lot of dope Hip Hop over the years. He also dropped a couple of pretty good solo projects, his last one – Stay Up – in 2014. In 2020 Chokeules is back with another solo full-length (if a short one at 36 minutes): Nepotism.

Nepotism is a very well-balanced album – it may be short, but there’s not a moment wasted. Choke has the effortless flow of a seasoned veteran, and he expertly balances serious subject matter with great wordplay and fun punchlines. The chilled-out boom-bap beats crafted by LRYBRDBTZ and the well-placed cuts by DJiRATE fit Choke’s’ lyrics to a T. This is a stylish and classy album that will be appreciated by 90s Hip Hop fans for sure, but that’s up-to-date enough to not just appeal to old heads – Nepotism is a project that will satisfy the tastebuds of all Hip Hop connoisseurs, and not just of the old heads. 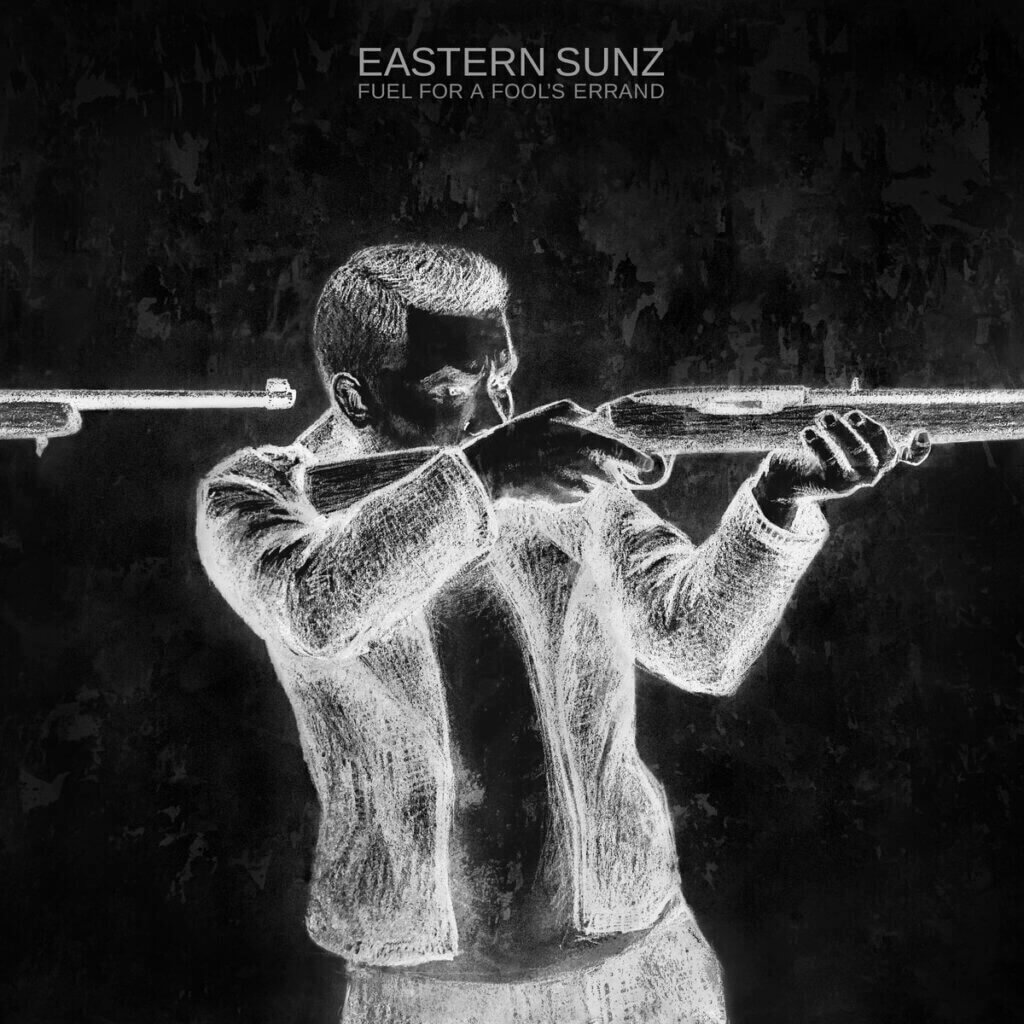 Eastern Sunz is a duo from Portland, Oregon consisting of Courage and Travis T. On Fuel For A Fool’s Errand, Eastern Sunz comes with a potent blend of live instrumentation and traditional feeling boom-bap, with funky drums, jazzy basslines, and even some fresh guitar and piano work combined with well-dosed old school turntablism and sampling. Lyrically, Eastern Sunz covers a wide range of topical issues such as climate change, police brutality, corporate influence in politics, and misconceptions about social assistance – this is Hip Hop for thinking people, which can be enjoyed just as well by those who don’t care about lyrics but who listen to Hip Hop simply for smooth sounding instrumentals and dope flows.

Fuel For A Fool’s Errand is put together perfectly, there are no useless interludes or other fillers to be found here – just 12 equally strong tracks, with no weak spots at all. Some well-placed features (from Ras Kass among others) complete this eminently listenable album. Unfortunately, most people will sleep on Fuel For A Fool’s Errand – but those willing to look beyond the standard rap fare will be happy to discover one of this year’s most pleasant surprises. 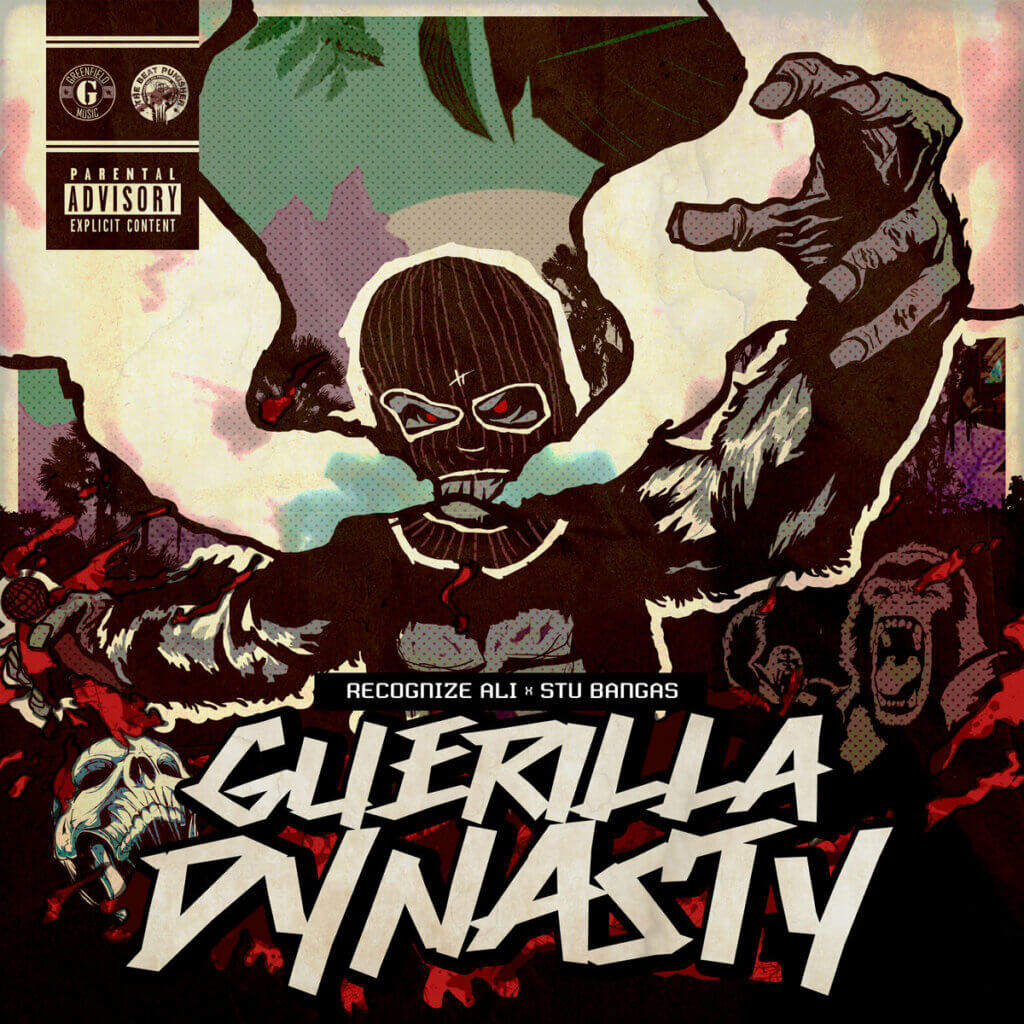 Guerilla Dynasty is a collaborative project by underground emcee Recognize Ali & prolific producer Stu Bangas. There’s A LOT of this kind of neo-boom-bap projects being released in recent times, and even if there’s little innovative or surprising to be found here, Guerilla Dynasty is one of the best albums of its kind out this year. More than the lyrics, it’s the beats that make this album an above average listen. As always Stu Bangas comes with his signature booming drums, this time around laced with menacing piano and sax loops, to serve as perfect backdrops for Recognize Ali’s rhymes.

Guerilla Dynasty features contributions from Ill Bill, Lord Goat (Goretex), Blacastan, Verbal Kent, SmooVth, Marvalyss, SageInfinite, DJ Tray, and DJ Eclipse, to make for a well-rounded and hard-hitting boom-bap album – one of the most potent collaborations of the year.

Third Root – Passion Of The Poets Third Root is a trio that consists of Charles Peters (Easy Lee), Marco Cervantes (Mexican StepGrandfather), and DJ Chicken George (DJCG). Peters is an accomplished poet/author/MC & educator, Cervantes is a producer/MC/Ph.D. who teaches at the University of Texas at San Antonio, and DJCG is a world-renowned DJ, musicologist, designer, and Jazztronica! Peddler. Passion Of The Poets is their fourth full-length album. The album is produced by Grammy-winner Adrian Quesada, nu-cumbia legend El Dusty, and veteran beatsmith Illfudge, and has features from Black Pumas, Kam Franklin, Grupo Fantasma, Bavu Blakes, and Mad1ne.

Passion Of The Poets is a soundtrack to the time we live in now, with clever and thought-provoking lyrics from Easy Lee and MexStep. Both are educators and their backgrounds show in their lyrical content. Without becoming preachy anywhere, they succeed in being educational and entertaining at the same time, perfectly balancing sh*ttalking with insightful socio-political commentaries.

Musically, Passion Of The Poets offers a potent blend of 90s-centric boom-bap, Southern Hip Hop, and Latin sounds. The album’s 12 tracks are perfectly sequenced, and every song hits, no skips are necessary. Even the cover art is done exactly right. Passion Of The Poets will probably fly way below most people’s radars, but those who take note will discover one of this year’s best projects. 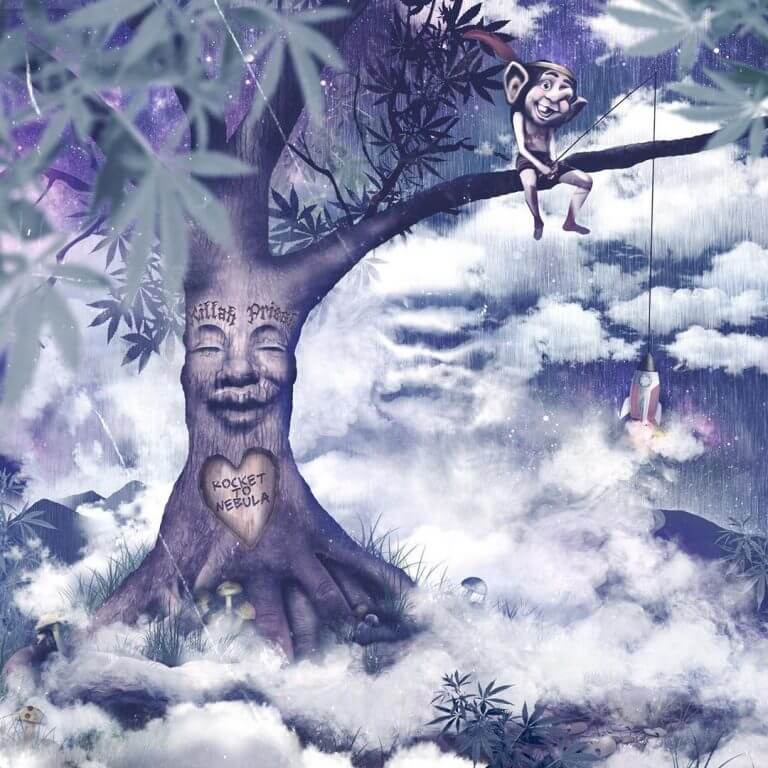 Wu-Tang Clan affiliate and Sunz Of Man member Killah Priest is one of the most prolific artists in Hip Hop. Artists like Kool Keith, Tech N9Ne, and K-Rino may have more releases on their names, but it’s not easy to keep up with Killah Priest’s release schedule either, taking into account all his solo-projects, group and collaboration efforts, and his endless list of feature appearances.

Heavy Mental (1998), Elizabeth (2009), The Psychic World of Walter Reed (2013), and Planet Of The Gods (2015) are the standouts in Killah Priest’s catalog, and Rocket To Nebula rivals these titles in terms of quality – even if it’s even more of an acquired taste than most of his other releases.

On Rocket To Nebula we get the same kind of stream-of-consciousness type lyricism we know from Killah Priest, filled with his characteristic metaphysical musings and slick subliminals. Musically, this album differs from his best works though – there are no bass-heavy beats to be found here, in fact, the whole album is practically drumless. The instrumentals on Rocket To Nebula are very low-key, offering dream-like backdrops to Killah Priest lyrics, which makes listening to this album something akin to a meditative experience.

This may not be an easy album to get into, and it certainly demands real attention – but if you’re willing to take an hour and 15 minutes to tune out everything else going on around you Rocket To Nebula will be sure to satisfy.