“Triumph” is a single by Wu-Tang Clan, from their 1997 album Wu-Tang Forever.

Triumph is famous for being almost six minutes long without having a chorus/hook. Instead, it solely consists of verses from the nine living Wu-Tang members (including Cappadonna), as well as an intro & interlude by Ol’ Dirty Bastard.

Also, Inspectah Deck’s opening verse is often named as one of the greatest verses in Hip Hop history: 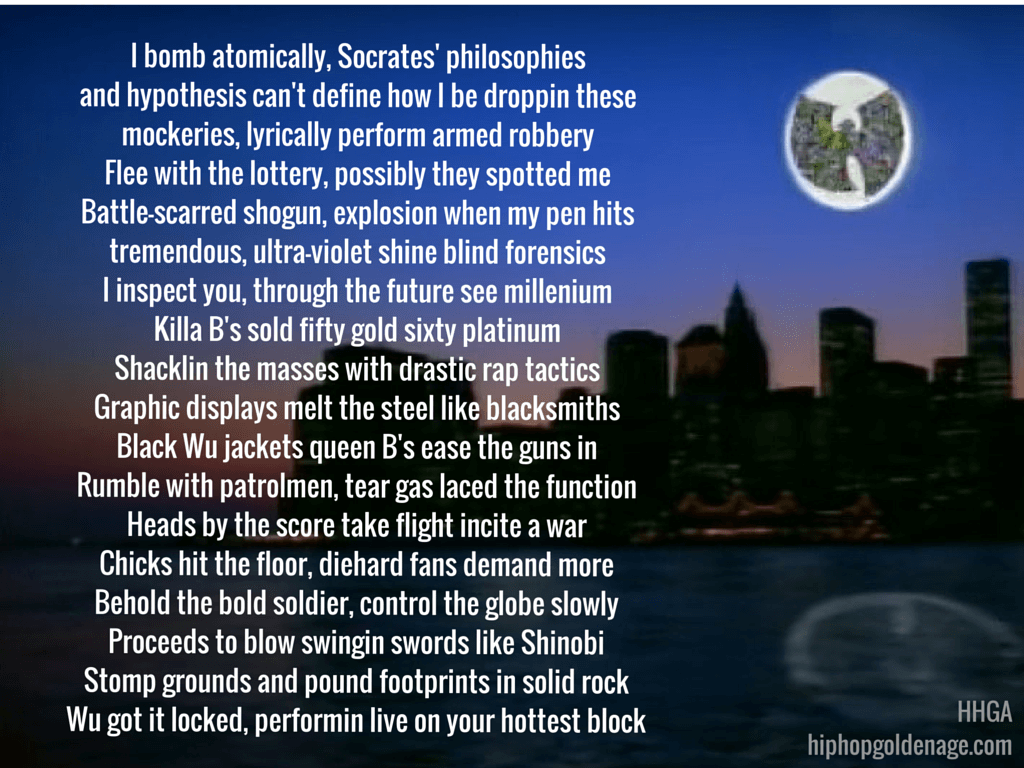 The video was directed by Rush Hour director Brett Ratner. The video begins with a fictional breaking news bulletin alerting of a massive swarm of killer bees converging on Manhattan via New York City’s four other boroughs, Brooklyn, Queens, The Bronx and the Wu’s native Staten Island. This opening is very similar in style to the opening of Baz Luhrmann’s 1996 film Romeo + Juliet.

The news anchorwoman then goes on to reveal that none other than Ol’ Dirty Bastard is atop a Manhattan skyscraper surrounded by police helicopters and police with guns drawn, ready to jump and with his finger on a detonator to what is assumed to be a bomb. The anchorwoman then mentions that there just may be a connection between these two seemingly coincidental events. Ol’ Dirty Bastard doesn’t actually appear in the video. According to Brett Ratner, ODB was uninterested in appearing in the video since he had no verse on the song, so he left the set before filming and a stand-in was used in his place.

Inspectah Deck, a ‘superhero’, is climbing on the side of the building directly beneath ODB. When ODB jumps off to evade police, Deck runs down the side of the building, reaches the ground, and catches him. As people are scrambling in the street below, Method Man and others ride on motorcycles through the chaos trying to outrun the fireball behind them. When he finishes rapping it explodes and Meth is flung far away. The killer bees are seen passing by them, and go down the sewers and arrive at Cappadonna’s secret lair. U-God is seen in a burning forest, hanging on a tree with a few doppelgängers. The killer bees then travel across the water to an Alcatraz-esque prison, where they bust a hole in the wall in the shape of the Wu-Tang symbol. RZA is wearing artificial wings and appears to be walking to the hole in order to jump out and glide to safety. Instead, he transforms into a swarm of bees and kills the guard. The scene switches to space, and GZA is watching over the Earth as an infinitely wise, God-like figure.

During GZA’s verse, a brief scene from the 1915 film The Birth of a Nation is shown. He makes a gesture with his hands and sends the killer bees back down into Manhattan. They conglomerate to form Masta Killa, who is standing on a tower in the shape of the Wu-Tang Clan symbol. People gather around him as if he was preaching. He forms a spark in his hands that enters all of their eyes, symbolising the exposure to “true Hip Hop”. He then fades away in the form of killer bees, who travel to a club, where Ghostface and Raekwon are rapping. After they finish, the crowd transforms into a mass of bees that travel into the sky, forming the W in front of the moon, similar to the bat-signal. (Wikipedia)