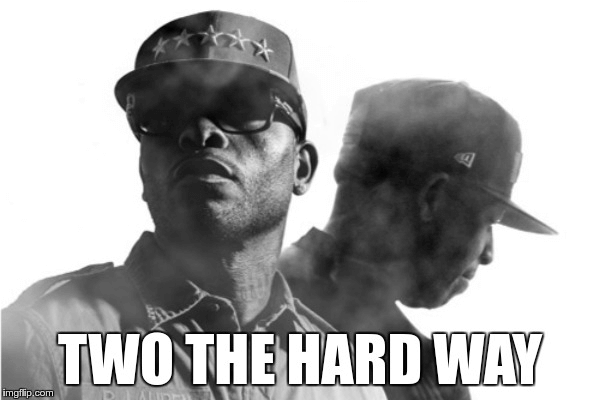 Some partnerships just take it to another level.

Hip Hop was made for this kind of effort. Kurupt displays his perfect breath control and absolute mastery of space and time, while Quik goes insane on the beat with stuttering vocal and heavy machine gun funk bassline. Man, that snare hit is like a whip on your back, but you’re too busy being hypnotized by the samurai sword swings of lyrics to notice how much you’re being punished by it. 9 times outta 10 you’ll hit that repeat over and over again.

Talk about coming out of nowhere but being everywhere. Mr. Be Here Forever goes further to prove that he’ll still be dropping dope rhymes well into his twilight years, displaying an effortlessness that only a handful of MCs could ever approach. Marley Marl must have listened to his classic production on Mama Said Knock You Out before stepping all the way up for this immense collaboration, finally ending that long beef with a Galactus level beat for the Teacha to destroy.

Will Kool G Rap ever fall off? Since his debut in the Juice Crew, this dude has been dropping nonstop inspirations for a generation of MCs, affecting Eminem and Pun’s skills to greatness. Not to be overshadowed, Muggs spins an incredible ghetto soundscape that paints a beautiful backdrop for anyone to flow over. But yo… that run that G goes on at the end of the second verse is one of the sickest spits EVER. If you aspire to be an MC, study that for about a year and get back at me.

Like most of Madvillian’s tracks, this one is short and sweet but hits like an atomic bomb. I’m not even sure why I love this so much or why its universally praised. I guess they both make it look so simple that the vast intricacies just warp your brain in the background. DOOM and Madlib made such a lethal combo. That piano, tho.

I’m sure some will think it’s blasphemous to not drop “BOOM” right here, but let’s keep it 100: this song is just ridiculous on many levels. I don’t believe I’ve ever heard Royce get this loose before, speaking some of the realest talk about the music we all know and love. That beat just screams Preemo, being a straight banger with all the quirks and cuts you’d expect from the expert DJ. This is nothing short of Gangstarr 2.0, The Manifestation.

What a stunningly brilliant track. I always knew that Jeff had beats galore, but this one is easily the best thing I’ve heard come out of the Philly native. That sample and its use is just jaw-dropping, as J-Live works out that topic to its peak cleverness. I didn’t even know J before this, but I was an instant fan after I wore out that repeat. No, it’s not a game. If you want to join this rap game, you better work at it.

The Change Up - 9th Wonder & Buckshot

How nice is it to see Buckshot still bringing that heat? He always had that pure Brooklyn Hip Hop ish, and this track just showcases his ability to just pick up a mic and go. As usual, 9th displays his Midas touch with those fast vocals and jeep thumping drum hits. This comes off like an unpolished diamond, and I’d expect no less from the Duck Down general and the Wonder from Little Brother.

Perfect title, perfect topic, perfect beat, perfect lyrics. This is serendipity at its finest. Juice Crew Alum Masta Ace just gets freaky all over this pure happiness beat. Polo channeled his inner Preemo on this one, with the sound is so rich it’ll drop you back in ‘88 with full Fila gear and boomboxes. Meanwhile, The Masta does what he does best: constantly reminding you that Hip Hop is eternal, so get reacquainted with his voice and his incredible skill.