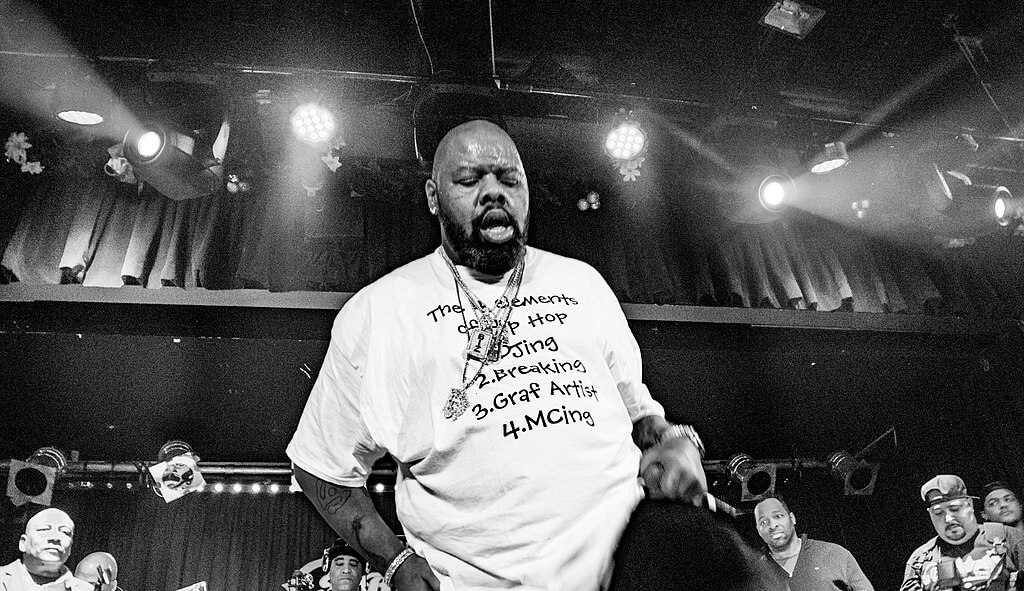 Born to embrace Hip Hop, The legendary Biz Markie is originally from Harlem but later moved to Long Island where he gained notoriety by his early teen years for beatboxing and rhyming. Biz Markie brings more than 30 years of solid Hip Hop acumen and an overwhelming fan base that stretches from New York City to Japan to Europe. At the age of 14, Marcel Hall dazzled his neighborhood under the alias of Biz Markie. His music scene debut began in 1985 as a beatbox for Roxanne Shante of the Juice Crew. From then Biz began constructing his own destiny in the mystifying world of rap and Hip Hop. No easy feat to accomplish, Biz has been the definition of longevity and has managed to remain one of the most notable artists and DJs in the industry for decades.

This is our top 15 Biz Markie songs. Agree? Disagree? Discuss!

“Y’all know me as the B-I-Z / That roc the microphone most definitely / Bringing you styles that you never heard / Like brother thug like brother nerd / I’m real super, high in the 80’s / Even Austin Powers’d say “yeahh baby” The hip-hopper unpredictable showstopper Whatever I say, ya know it’s proper / Cuz when I kick it, I kick it like a field goal / Like Erik B and Rakim ya know I got soul / I got funky rhymes that blow your mind…”

From the 2001 Superrappin – The Album, Vol. 2 compilation, this hidden Biz Markie track is one of the most underrated songs in his whole catalog. Great energy from Biz, and an infectious driving beat supported by some dope-ass sampling and scratching.

“I was walking down the street, just a minding my biz / I saw this young lady, the ultimate / She had a pair of jugs that was so fine / Then I took a look at that behind / 36-24-36, I looked to her and I said “I need a fix” / I asked her the same blahzay, blahzay / Her name, where she live, and how much she weigh / I got her digits and gave her my 1-800 beeper number / You can leave a message under the name of Rhumba / I know you’re bugging off the nickname, I would be too / But every time she be walking, she turns the heads of the crew / Word is bond, I wouldn’t be messing / With this girl if I knew she was an adolescent / To all the guys over 21, here’s the news: / It’s the hip-hop version of the Young Girl Bluez…”

“Young Girl Bluez” is one of the singles from the 1993 album All Samples Cleared!, this one dealing with the dangers of pursuing adult-looking but underage girls, all of it from a young man’s point of view.

“Soon to be elected in the Hall of Fame / I rock the microphone, emceeing’s my game / I flip so many styles, my name should be Flipper / On Three’s Company, I wish I was Jack Tripper…”

From the otherwise so-so 2004 comeback album Weekend Warrior, this track is one to remember. Jazzy Jeff’s beat and scratches are dope as f, the hook sticks in your head, and the nonsensical top of the head rhymes are classic Biz. A Biz Markie playlist without “Tear Sh* t Up” on it is an incomplete Biz Markie playlist.

“I once knew a girl by the name of Monique / She was my childhood sweetheart every day of the week / Whether PS46, or 151 / After school I’d go to her house, to have some fun / We both lived in Colonial Projects / I lived in building 48, she lived in building 26 / We used to play Ringling, Coke or 1-2-3 / But when I’m in Monique’s presence, I would just freeze…”

There’s a lot of great songs on Biz Markie’s sophomore album The Biz Never Sleeps, this one is one of the absolute stand-out: a heartwarming lovestory about a childhood sweetheart.

“Now this may sound disgusting and like very gross / But it’s sure to have you trippin’, so yo, listen close / It’s not bright as the sun or sweet like sugar / But it’s rather on the bug tip and it’s called Pickin’ Boogers…”

Juvenile and kind of gross, but classic Biz Markie anyway – also because of the dope Marley Marl instrumental.

“So I went into the show, and started maxin / People came up to me, and started asking / Whassup wit me, and when I’m gettin on / And how many records is Shante gonna perform / I don’t know, but now I gotta go / Cause Shante is callin me to do the show / First she was on, and then she called me out / I did a lot of funky beats without no doubt / I put the mic on my head, and began to riff / The crowd began to flip, cause I was rockin the shift / When we was done, I started to laugh / Massive people come to me for my autograph / After the funk was over it was time to break / If I was rhymin it would be the icin on the cake / As I saw Shante, get into a limo / I had to walk home, I wrote it in my memo…”

This is a classic song, if only because it forever changed the Hip Hop industry. Biz Markie was served a lawsuit by Gilbert O’Sullivan because “Alone Again” contained an unauthorized sample from O’Sullivan’s 1972 song, “Alone Again (Naturally)” The resulting case was Grand Upright Music, Ltd. v. Warner Bros. Records Inc., in which the court granted an injunction against the defendants to prevent further copyright infringement of the plaintiff’s song by sampling and referred them for criminal prosecution. The judgment changed the Hip Hop music industry, requiring that any future music sampling be pre-approved by the original copyright owners to avoid a lawsuit. Biz would poke fun at his misfortunes, titling his next album All Samples Cleared!.

“On the mic at this time in the place to be / I’m the Inhuman Orchestra called Biz Markie / That made you dance, make the music with my mouth, and all / But I’m here to talk about the Albee Square Mall…”

Only Biz Markie can make a song about a local shopping mall and turn it into an anthem. Classic Marley Marl beat, and an unforgettable TJ Swan hook.

“Sittin’ here reminiscin’ back to high school / When every time I see you, girl, you know that I drool / Day-dreamin’ in class thinkin’ what would I say / When I saw you, but you never looked my way…”

On “What Goes Around Comes Around” Biz Markie does what he does best: humorously recounting some (miss)adventures over a catchy beat. This is one of the best songs on Biz’s generally underrated fourth album All Samples Cleared!.

“Don’t you like when the winter’s gone / And all of a sudden it starts gettin warm / The trees and the grass start lookin fresh / And the sun and sky be lookin their best / Birds be singin, flowers be blooming / A lot of brand new cars be zoomin…”

One of the singles off Biz Markie’s second album The Biz Never Sleeps, in popularity second only to the unbeatable “Just A Friend”.

“Hey to everybody and, people that say partyin’ / It’s time to hear a funky rhyme from me the Biz Markie again / As I just display ’em, the way I like say ’em / The stutter steppin’ style that I use to amuse and HEY / I’m the original, hellified king-ing / For freaky sound, for throwin’ down, and you know that I’m bringing / The crowd to enjoyment, by what I do…”

Biz Markie’s debut album is really underrated. “Biz Is Goin’ Off” is just one of the Biz Markie classics on Goin’ Off.

“Subject two, and this one is a doozy / A messed up story about a girl named Suzy / Now when you’re on WIC, the problems may seem enough / But you know she had to get Scotty to beam her up / On a crack mission, no type of ambition / Make blunts disappear better than a magician / Her eyes got dim, her body got slim / She said there’s nothin in the world like a good ol’ stem…”

In this song, that is built on the “Baby Come Back” bassline from Player, Biz gives us three examples – in typical Biz Markie fashion – of how drugs will mess up your life. This is an underrated track from an underrated album.

“Well I’m the human orchestra called Biz Markie / Makin music orally is my specialty / When I go [BOOM] ah one-two, girls get excited / When they hear my lyrics they wanna recite ’em…”

“Make The Music With Your Mouth, Biz” is Biz Markie’s breakthrough track, released two years before his debut LP Goin’ Off. The Marley Marl beat is a CLASSIC.

“Radio, TV and even the press / Know the meanin’ of V-A-P-O-R-S / The meanin’ of this word without no doubt / Means nobody wants to be there when you’re down and out / Once you’re established and got a lot of money / Everybody wanna be your buddy and honey…”

The lead single from Biz Markie‘s full-length debut album Goin’ Off. In full story-telling mode, Biz shows us how people’s behavior towards you changes after you become successful. “Vapors” is a monumental 1980s Hip Hop song.