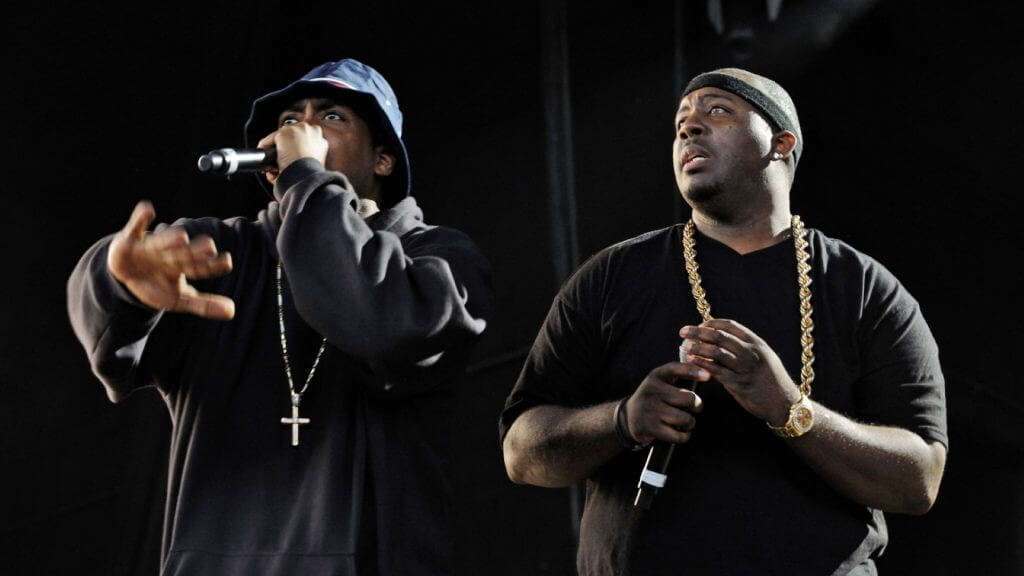 EPMD is and has always been one of the most consistent and well-respected duos in Hip Hop. Erick Sermon and Parrish Smith had a huge influence on the Hip Hop scene with their funk-based grooves and laid-back rhyming. Even though there were a couple of split-ups (and subsequent reunions) during the Long Island duo’s career, they managed to drop a string of high-quality albums, as a duo and as solo artists. Especially the first three albums they did as EPMD (Strictly Business, Unfinished Business, and Business As Usual) are widely considered true Hip Hop classics.

For this list, we have selected our top 15 EPMD songs. Is your favorite EPMD joint not here? Let us know in the comments!

“As airwaves collapse rap shows at a standstill / Some racial circuits the frequencies can’t handle / The funk tracks produced by EPMD / But it’s a fat jam, that will never win a grammy / Unless we sellout and kill the black movement dead / Which means swallow our pride and become flunkies instead…”

After dropping two classic albums in two years time, the question was: can EPMD do it again for a third consecutive year? The answer was: yes, it’s Business As Usual.

Filled with banging tracks, Give The People is just one of the many tracks of Business As Usual that could have (and maybe should have) made this list. Give The People is typical EPMD: it has Erick and Parrish trading dope verses in that laidback and confident way we’d come to love; this time about the dangers of selling out and the state of rap in that era.

“OK f*** it, enough with the tight sh**, grab the mic quick / Hollywood n****s, put it down spit some hype sh** / EPMD Erick and Parrish, Makin Dollars / With the rap scholars keep the show packed like funeral parlors…”

From their first ‘comeback’ album – the 1997 Back In Business – this is another vintage EPMD joint, which has E-Double and PMD bragging and boasting about their skills over an especially dope instrumental.

“Relax while I tax, or you can just max / It really doesn’t matter, just stay the hell back / Poppin much junk, now the time has arose-n / I pick your card and your name has been chosen…”

Didn’t Nas use this instrumental for Nastradamus? Yes, he did, and this is where he got it from. Just one of the classics tracks from the seminal Strictly Business.

EPMD classic cautionary tale about materialistic women, one of the first (but not the last…) times a full song was dedicated to that particular subject.

“Rap terror terror, EPMD, a new era / Off the Richter scale, blowin hotter than ever…”

One of the singles and dopest tracks of 1997’s Back In Business, together with Never Seen Before and Da Joint.

Another sample-heavy classic from Strictly Business, You’re A Customer does what EPMD does best: great lyrics over a funky, bouncing beat. Dopeness.

“Hurry hurry and step right up / The best show on earth, EPMD yea word up”

Hard to pick favorites from EPMD’s second album Unfinished Business, but this one has to be one of them. The neck-snapping beat, the lyrics, the overall vibe: this song is what EPMD is all about- being casually hardcore, without the need for profanity or gun-toting tough-guy posturing.

“Let’s get up, let’s get down / Roll with the hardcore funk, the hardcore sound / Let’s get wit this, mackadocious funk material / So simple, when I rock wit the instrumental…”

The first single off their fourth album Business Never Personal has Erick and Parrish attacking pop rappers and sell-outs, ironically it would become one of their biggest hits.

“MC’s, get off the bandwagon / I’m not bragging, but tagging / And snagging the biter that tries to imitate / Time to go on strike and demonstrate…”

That beat! This bass-heavy track has a nice old-school feel to it and tells whoever it may concern to stay of EPMD’s jock. Timeless.

“Ka-rank the boombox as my sound knock from blocks / As I chill, and bust grills you take snapshots…”

Another one of EPMD biggest hits, this energetic track gives us guest spots of fellow Hit Squad members K-Solo and Redman. Especially rising star Redman steals the show here with an epic verse (which he himself rated one of his top 20 verses off all time).

“So pick up a pen, cop a squat, and take note / A rapper suffered from bleedin’, sprains and slit throats / Cause my style, deadly psychopath schizophrenic / A rapper choke like a carburetor, freeze up and panic…”

“Open Sesame, and let down the main gate / Before you scream EPMD, you should wait / I roll with a posse, can you try to stop me / Also yo, your brothers tried to pop me / On the sneak tip, without me knowin / So I keep goin, and my rhymes keep flowin / On and on, and I don’t quit / I get pushed to the limit, and yo that’s it…”

“At my point of attack I soar at you like an eagle / I’m the sheriff and bitin is illegal / So when I’m in town, I highly recommend this / You gots to chill, because I’m Strictly Business…”

Classic sampling of Bob Marley’s “I Shot The Sheriff” gives this opening track of EPMD’s epic debut its ultra-recognizable hook.  The perfect opener of a landmark album.

“The employees of the year, yeah we’re back to work / I took time off, while other rappers got jerked / Due to the fact they wack and their track / Have to go back and stack cause they lack / The ingredients EPMD and scratch for that…”

“Relax your mind, let your conscience be free / And get down to the sounds of EPMD…”