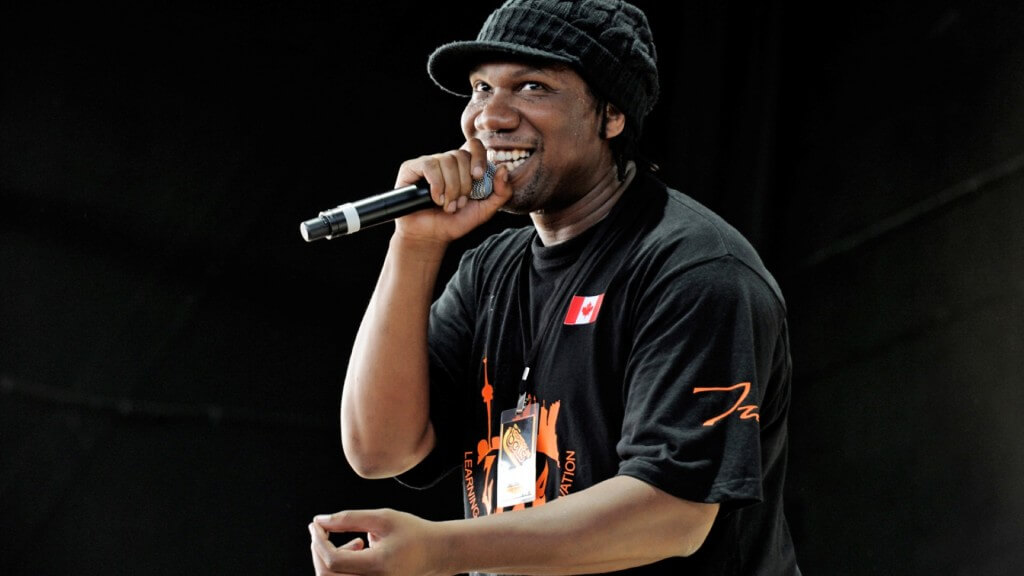 KRS One is THE personification of Hip Hop. His own words “Rap is something you do, Hip Hop is something you live” adequately sum up KRS One’s philosophy. Always ready to drop knowledge, he is the self-proclaimed ‘teacha’ – a well-deserved moniker. In addition to being one of Hip Hop’s most prominent and most consistent conscious voices, KRS One also is one of Hip Hop’s best live performers, one of its best freestyle- and battle rappers and one of it’s most powerful personalities. If Hip Hop were politics, KRS One would be President.

KRS-One is a monument to longevity within the Hip Hop game, and he is living proof that as long as artists stay true to themselves, they can make amazing music for decades rather than years. Unwavering authenticity gives KRS-One credibility and maximum respect of real Hip Hop heads, whatever critics say and haters may throw at him. His legacy is untouchable and there can be no debate about the most influential or the best-ever emcee without including KRS-One in that conversation – and putting him at the top spot when all talking is done.

In his 30plus-year career, there are many high-lights, both before and after the turn of the millennium. Since we are Hip Hop Golden Age, we will pick our top 15 KRS One songs from before the year 2000; tracks released as a solo artist or as part of Boogie Down Productions. Do you agree with our top 15 KRS One songs? Do you feel songs are missing? Share your opinions in the comments!

“Well now you’re forced to listen to the teacher and the lesson / Class is in session so you can stop guessing / If this is a tape or a written down memo / See I am a professional, this is not a demo / In fact call it a lecture, a visual picture / Sort of a poetic and rhythm-like mixture…”

The opening track to the classic Criminal Minded sets the tone for the rest of the album: hard, minimalistic beats and KRS’ intelligent lyricism. Revolutionary and hugely influential, Hip Hop in its purest form.

“Any MC can battle for glory / But to kick a dope rhyme to wake up your people’s another story / Act like you never saw me / Cause when it comes to lyrics, I’m in a different category”

This DJ Premier-produced banger is the perfect opener to KRS One’s underappreciated eponymous titled second solo album. KRS has a message for wack rappers – guess what: they are in danger.

In this song, which can be seen as a predecessor track to Rappaz R N Dainja, KRS One warns currently hot rappers their (material) successes may not last and that longevity in the game is not a given. Dope track.

“You see me coming in de dance with the spliff of sensei / Down with the sound called BDP / If you want to join the crew, well you must see me / You can’t sound like Shan or the one Marley…”

Directed at the Juice Crew, and in response to MC Shan’s Kill That Noise, this is the final jab on wax in the Bridge Wars. Brilliantly hard in its simplicity, it is instantly recognizable because of the menacing beat, sharp drum kicks and classic piano melody.

“Mental pictures, stereotypes and fake history / Reinforces mystery / And when mystery is reinforced / That only means that knowledge has been lost…”

Much like Black Man In Effect from Edutainment, this song is signature KRS One. Thought-provoking, provocative, filled with knowledge and ultimately uplifting – this is one of the highlights of Boogie Down Productions’ third album.

“No I won’t let up, because of how I’m set up / I come in the jam with the crazy fresh lyrics so you get up / MCs get wet up, they met up with atypical / Subliminal, I’m original metaphysical Criminal Minder…”

One of KRS One’s hardest tracks. Over a wicked drum beat, KRS delivers another clear message to sucker emcees about who exactly holds the crown in Hip Hop.

One of the stand-out tracks from the overall excellent By All Means Necessary album. As early as 1988 KRS proclaims with confidence he is ‘still’ number one, and will still be fifty years down the line. With three decades in, he certainly is well on his way.

Just one of the classic tracks of Criminal Minded. Clever lyrics, a banging instrumental – this song, along with the rest of the album, was crucial in the maturing of Hip Hop and was one of the albums (together with Run DMC’s Raising Hell, Eric B & Rakim’s Paid in Full, Public Enemy’s Yo! Bum Rush The Show and LL Cool J’s first two) that started Hip Hop’s Golden Age.

In this song KRS addresses the fact that the American educational system has too big a focus on ‘white history’ and he tries to show his listeners the importance of knowing African American history. And if the schools will not show you the whole picture, you have to educate yourself. You must learn.

As relevant today as it was three decades ago, in this song KRS One addresses police brutality specifically directed at black people, cleverly linking the days of slavery to the way police acts in these modern times. Poignant, powerful, and (unfortunately) still relevant.

“Yo, I’m strictly about skills and dope lyrical coastin’ / Relying on talent, not marketing and promotion / If a dope lyrical flow is a must / You gots to go with a name you can quickly trust / I’m not sayin I’m number one, uhh I’m sorry, I lied / I’m number one, two, three, four and five / Stop wastin’ your money on marketing schemes / And pretty packages pushin’ dreams to the fiends / A dope MC is a dope MC / With or without a record deal, all can see / And that’s who KRS be son / I’m not the run of mill, cause for the mill I don’t run”

An ultimate party anthem, energizing fans and intimidating and schooling rivals at the same time. Great lyrics, great instrumental – it is the absolute highlight of the somewhat uneven I Got Next album and one of KRS One’s best songs, period.

“Many people tell me this style is terrific / It is kinda different but let’s get specific / KRS-One specialize in music / I’ll only use this type of style when I choose it / Party people in the place to be, KRS-One attack / You got dropped off MCA cause the rhymes you wrote was wack / So you think that Hip Hop had its start out in Queensbridge / If you pop that junk up in the Bronx you might not live…”

In response to MC Shan’s The Bridge, South Bronx came HARD. It left no room for doubt about where Hip Hop originated nor who reigned supreme. An all-time classic Hip Hop anthem.

“My family’s happy everything is new / Now tell me what the fuck am I supposed to do?”

The perfect example of storytelling and conveying a message through music. The brilliant video that goes with it makes this thought-provoking song even stronger.

“Flow with the master rhymer, as I leave behind / The video rapper, you know, the chart climber / Clapper, down goes another rapper / Onto another matter, punch up the data, Blastmaster / Knowledge Reigns Supreme Over Nearly Everybody / Call up KRS, I’m guaranteed to rip a party…”

The perfect symbiosis of the KRS One – DJ Premier collaboration. Over Premo’s masterpiece instrumental, KRS once again lets other rappers know what’s the deal. The lesson to be learned here: you’re not a real emcee if you can not rock a crowd. No one more suited to make that claim than one of the best live performers Hip Hop has ever seen.

This track was so far ahead of its time, Hip  Hop still hasn’t caught up yet. Filled with Hip Hop Quotables, this song addresses the commercialization of Hip Hop and the rise of wack and fake rappers. Almost 30 years old and more relevant today than ever. Prophetic and brilliant, My Philosophy will always be considered one of Hip Hop’s biggest songs EVER.