Just One: Black Star or OutKast 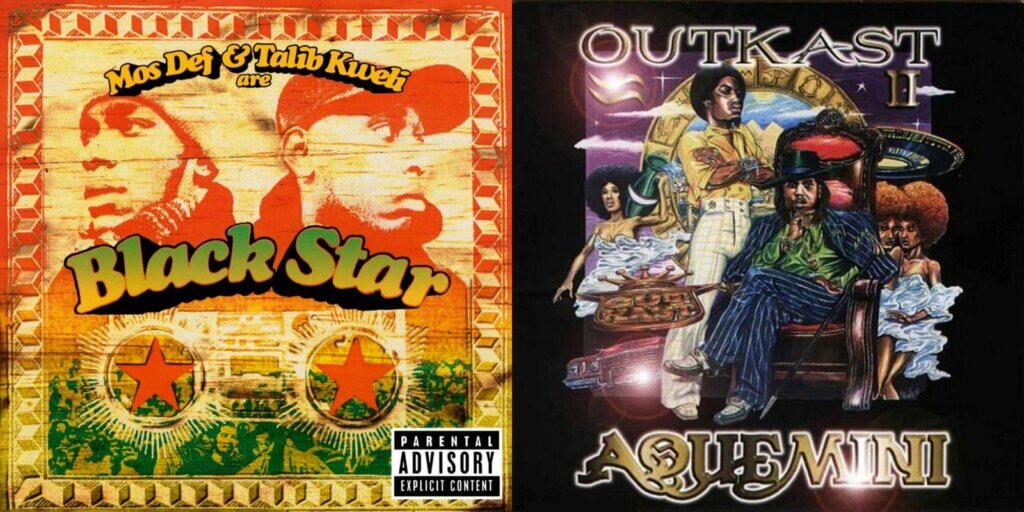 This is the hardest one yet.

I can’t believe I’m writing this: Mos Def & Talib Kweli or Andre 3000 & Big Boi in a head to head? I’m about to show my age but remember when Hulk Hogan and Mr. T went up against Roddy Piper and Mr. Wonderful? That’s how big of a match-up this is to me.

Both OutKast and Talib Kweli have been featured in previous Just One essays, but those match-ups do not compare to this one.

Back in 1998, I placed a priority on how good a CD sounded good in my car, which explains my No Limit Records purchases. However, I still valued unique and talented lyricists. A fact that makes September 1998 an important month in my Hip Hop fandom and drives today’s match-up. A match-up that we will score in a handful of categories to determine whether Mos Def & Talib Kweli Are Black Star or Aquemeni should have been our initial purchase. Emphasis on “initial” because any real Hip Hop fan owns both.

Everybody clear? Well, let’s do it.

Wait, one more thing – I know that Mos Def goes by Yasiin Bey nowadays. However, since we are discussing an album from the past with his then-moniker as a part of the title, I’m going to refer to him as Mos Def in this article. I mean “his mama named him Clay, I’mma call him Clay!” Okay, that was a joke, much respect to Yasiin Bey; yet, again for this reflective piece, we will refer to him as Mos Def.

In 1998, I had not heard of Black Star. I had finished school and moved back to Michigan which compromised my access to emerging styles in Hip Hop. Moreover, the label, Rawkus Records, was introduced as the place where “ole boy from the Hip Hop Shop” got a track on an album (Eminem on Soundbombing II in 1999). I guess I was an example of the national awareness of Rawkus in 1998 which is we had not heard of them … yet.

As I frequently state, OutKast’s ATLiens is one of my favorite all-time albums of any genre. In them, I saw me and my friends – me being the odd one (Dre) and my man, Jay, be cool one (Big Boi). Plus, they were backed by Organized Noize, which if I compiled an instrumental of my young adulthood, Rico, Sleepy, and Ray’s sound would dominate it. Coming back to OutKast, I knew them well and was anxious for their third album.

“Definition”: First, Mos does the intro with a bumping beat- which certainly grabbed my attention. But when he spit:

Yo, from the first to the last of it, delivery is passionate

The whole and not the half of it, forecast and aftermath of it

Projectile that them blasted with, accurate assassin s***

My life changed. Keep in mind how Hip Hop as a culture had moved to the West Coast and was then being dominated by the South. It had been years since I heard a NY MC (that I wasn’t already familiar with) seize my attention.

“Rosa Parks”: Nope, this song or album for that matter would not be ATLiens part II. It should not have been. But because ATLiens meant so much to me, I was kind of hoping for that, even though OutKast’s growth and sound evolution were things I respected about them the most. Nevertheless, this joint was funky as hell! Many of us was singing along with the hook. Although it takes a very hard listen and imaging from Andre’s verse to fathom any remote connection to the real Rosa Parks, the song jumps out the gate and even the harmonica at the ends fits right in. Their sound evolved.

“Respiration“: Oh my Gawd! The beat, the bars, the imagery? For the type of Hip Hop fan I am, this is heaven via the speakers. Everybody (this track features Common) delivers Hip Hop Quotable bars.

It was these bars that made me a Talib Kweli fan:

Look in the skies for God, what you see besides the smog

Is broken dreams flyin’ away on the wings of the obscene

Thoughts that people put in the air

Places where you could get murdered over a glare

But everything is fair

It’s a paradox we call reality

So keepin’ it real will make you casualty of abnormal normality

You ever hear something so dope, you look around to others like “did you just hear this sh**?!” That was me (and I was alone!) after hearing “Respiration” for the first time.

“Skew It On the Bar-B“: Raekwon the Chef on an OutKast joint? Whoa. Now, this is a treat.

Big Boi wraps up this delight with:

We the type of people that don’t bury the axe

Or the hatchet, every time we see your link, we snatch it

Ridin’ round our hood talkin’ that dumb s***

Your cabbage is cracked, like plumber’s a**, and summer’s grass

I been in the game for a minute, seen some suckas like y’all passin’

Lil’ boy why you frightened?

Can’t say we saw this coming.

“Thieves in the Night“: I had the great fortune of teaching a Hip Hop course at my alma mater for eight years. Every single semester, I opened the class with an analysis and deep dive into “Thieves in the Night.” If I was an MC, this is the track I dream I would make. I have a lot of favorites but this joint right here? It should be preserved and studied as an embodiment of true Hip Hop.

Speaking loudly, saying nothing, you confusing me, you losing me

Your game is twisted, want me enlisted in your usury

Reflection rarely seen across the surface of the looking glass

Walking the street, wondering who they be looking past

Looking gassed with them imported designer shades on

Stars shine bright, but the light rarely stays on

Put you on a yacht, but they won’t call it a slave ship

Strangeness, you don’t control this, you barely hold this

Screaming “brand new”, when they just sanitized the old sh**

That they been running across stars through all the time with

The deadly ritual seems immersed in the perverse

The length of black life is treated with (short worth)

Look, I had to pull the car over to the side of the road to process all that. Then I played again.

“Liberation”: My favorite track on the album and one of my favorite OutKast tracks ever! Guest spots by Cee-Lo and Erykah Badu and a whole funky choral-like vibe. Plus, a verse from Big Rube!! Man, this track is SLAMMING! I’ll put it like this, if you never heard the song and I told you Big Boi kind of sang-rhymed this:

I say, to have a choice to be who you wants to be

You would be like, “eh.” But to hear it? My friend, it is an otherworldly musical experience. They did the da** thing on this track!

One more takeaway – for all the so-called weirdness of Andre, the parallels between his artistic evolution and Cee-Lo’s have more in common than is often acknowledged. I’m a fan of both and their evolution – so it is a win-win for me. 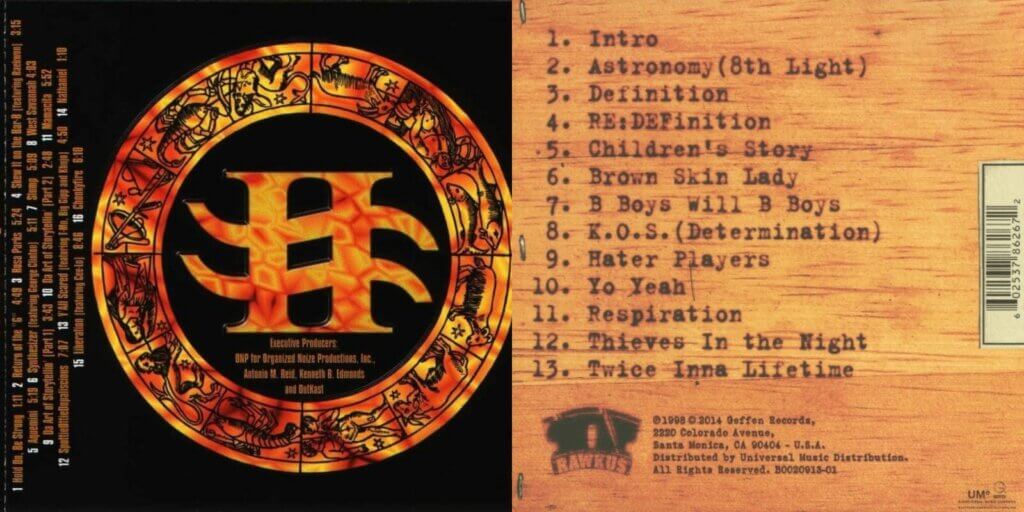 Ah ha!! This is where it gets real. My youngest daughter likes to experience Hip Hop with me. When I told her I was doing this match-up, she was “Ooooooo.” Then she flipped it and was like here’s how you know. She went to the playlist I keep on my phone and there it was: two Aquemini tracks and seven Black Star tracks. I guess when we get down to it, that says which aged best for me.

For those of us who never sat-in at the Lyricist Lounge and was otherwise removed from the burgeoning NYC ciphers, Mos Def & Talib Kweli are Black Star is a game-changer because we had never heard anything like this before. Come to think of it, it is probably a game-changer for those who were familiar with them.

Looking back at the time, we were just months away from “Cash Money taking over for the ’99 and 2000” and Puff Daddy was at his shiny suit pinnacle. Hip Hop was changing. But for me, I was longing for a time when “a dope MC (was) a dope MC.” Yasiin and Talib were saviors to me.

Aquemini was an evolutionary pace-keeper. OutKast had established themselves the dominant group from the South (and that’s coming from a guy who purchased UGK and Eightball & MJG albums). They were innovative. They were funky. They had the hits and they could spit! Yes, the South (OutKast) definitely had “something to say.”

We’ve only had one other tie, Kanye’s Late Registration or Little Brother’s The Minstrel Show. With that match-up and today’s, one group was impeded by their pre-release history. However, the fact is I hadn’t heard of them (at that time) and I can’t change that.

But what I would change is how long it took me to get on board with Black Star. You see, it wasn’t until Mos Def, Black Thought, and Pharoahe Monch were on the cover of The Source that I heard of them. The article piqued my curiosity and I bought Black on Both Sides the next day. I couldn’t believe that dude had escaped my awareness. That album had me all the way open. Because it was so dope, I needed some more and that “more” was purchasing Mos Def & Talib Kweli are Black Star. I was driving across Michigan and copped it during the trip. It didn’t come out of my CD player for a month.

Just One: 2Pac or The Fugees

Just One: Talib Kweli or The Roots