“Jazz (We’ve Got)” is the second single from A Tribe Called Quest‘s second album The Low-End Theory.

A segment of the track “Buggin’ Out” appears in the music video. The sequences from “Jazz (We’ve Got)” are in black and white, while the “Buggin’ Out” sequences are in full color.

In the video, directed by Jim Swaffield, the group travels around the city while rapping about the beauty of jazz. Q-Tip starts off the first verse followed by Phife, who rhymes after the second chorus. After Q-Tip’s second verse, he pauses and says, “now check it out”, at which point the music stops and Ali asks, “Check what out?”. Phife answers with, “Check this out”, and the video shifts into color for “Buggin’ Out” and Phife begins rapping his verse. This was the first time a track cut into its B-side within a single music video. During the “Buggin’ Out” sequence, the two rappers are seen wearing eye caps that make their eyeballs appear to be very large. After half of the song is performed the music stops, and the video once again cuts to black and white, with Q-Tip finishing his rhyme from “Buggin’ Out” as a freestyle. (Wikipedia) 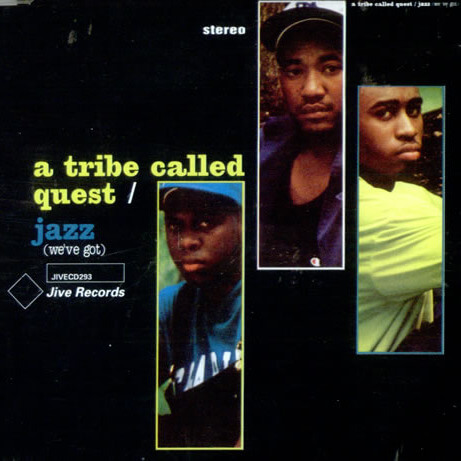