“Can I Kick It?” is the third single from A Tribe Called Quest‘s debut album People’s Instinctive Travels and the Paths of Rhythm.

The song was first recorded in 1989 when the members of A Tribe Called Quest, Q-Tip, Phife Dawg, and Ali Shaheed, were just 19.

It contains samples of “Walk on the Wild Side” by Lou Reed, “What a Waste” by Ian Dury and the Blockheads, “Spinning Wheel” by Dr. Lonnie Smith, “Dance of the Knights” by Sergei Prokofiev, and “Sunshower” by Dr. Buzzard’s Original Savannah Band. The line “A Tribe Called Quest” is spoken by the British radio DJ Pete Tong. Phife Dawg has stated that because of the use of the “Walk on the Wild Side” sample, the group didn’t receive any money from the single, with Lou Reed instead claiming the profits.

The music video, directed by Jim Swaffield, features A Tribe Called Quest and various others, including members of De La Soul, literally kicking the word “it” while rapping in a film set, an alley, and a construction site. On the film set, they are seen playing with the dot for the “i” in “it”. In the alley, they are walking around and are flipping on top of the “it”. Other things, such as throwing drumsticks around and landing them on drums, are also seen in the video. A “flying record player” is featured, to play the Lou Reed sample. Also, there is a slightly different beat in the video, but the same lyrics from the album are used. 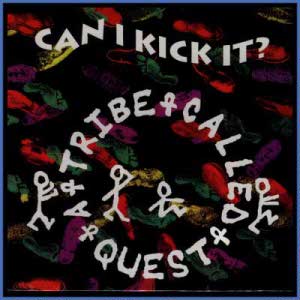