“Rosa Parks” is a song by OutKast, released as the first single from their 1998 album Aquemini.

In 1999, Rosa Parks sued OutKast and LaFace Records over the song. The lawsuit alleged that the song misappropriated Parks’ name, and also objected to some of the song’s vulgar language. Parks argued that there was insufficient artistic connection between the song’s title, which appropriated her name, and its content because the song’s lyrics did not reference Parks biographically, metaphorically, or symbolically. Specifically, Parks argued that the song’s lyrics meant, “[b]e quiet and stop the commotion. OutKast is coming back out [with new music] so all other MCs [mic checkers, rappers, Master of Ceremonies] step aside. Do you want to ride and hang out with us? OutKast is the type of group to make the clubs get hyped-up/excited.” The initial lawsuit was dismissed. Parks’ representation hired lawyer Johnnie Cochran to appeal the decision in 2001, but the appeal was denied on First Amendment grounds. In 2003, the Supreme Court allowed Parks’ lawyers to proceed with the lawsuit.

In 2004, the judge in the case appointed an impartial representative for Parks after her family expressed concerns that her caretakers and her lawyers were pursuing the case based on their own financial interest. Later that same year, the members of OutKast were dropped as co-defendants, and Parks’ lawyers continued to seek action against LaFace and parent company BMG. In 2003 André told UK journalist Angus Batey that, following a Detroit concert in the midst of the legal battle, relatives of Parks had approached him and implied that the case was less to do with Rosa than with the lawyers. The suit was finally settled on April 14, 2005, in the settlement agreement, OutKast and their producer and record labels paid Parks an undisclosed cash settlement and agreed to work with the Rosa and Raymond Parks Institute for Self Development in creating educational programs about the life of Rosa Parks. (Wikipedia) 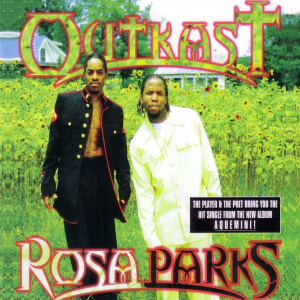