OutKast: one of the most critically acclaimed AND commercially successful duo in Hip Hop ever, with enduring Hip Hop credibility and massive mainstream appeal at the same time. Big Boi and Andre 3000‘s endless innovative creativity, incredible musicality, eccentric style and superior mic skills made sure the South would forever be a Hip Hop region to be reckoned with. Unfortunately Big Boi and Andre split up in 2006 with no reunion in the cards, but they left us with a near-perfect discography – with especially the first four albums being straight-up classics, not even confined to the Hip Hop genre.

With such an excellent catalog, there are a lot of quality joints to choose from to get to a Top 15. Not considered for this list are solo cuts and guest spots on other people’s albums, just tracks from Daddy Fat Sacks and 3 Stacks as a duo. Still, a tall order to pick only 15, as inevitably a lot of classics will be left out. In any case, these are our top 15 OutKast songs – if you miss your personal favorites please weigh in in the comments! 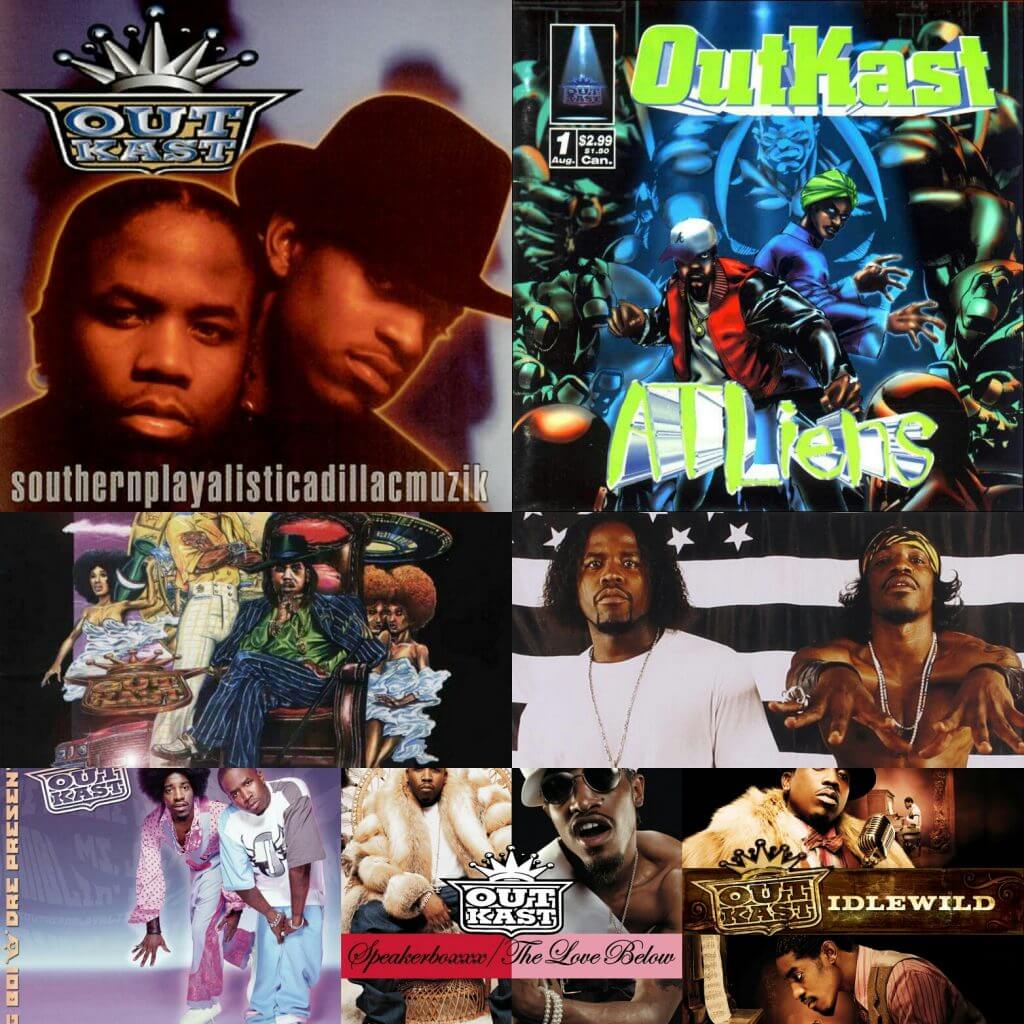 “How many times I, sit back and contemplate / I’m fresh off the dank, but I’m tellin my story.. / My relationship, with my folks is give and take / And I done took so much, now give me my glory…”

This 9-minute meditation is the perfect example of OutKast’s lush musicality and disregard for musical conventions. Maybe hard to label it as ‘just’ a Hip Hop song, Erykah Badu & Cee Lo Green’s contributions ensure a superior piece of music that could have gone on twice as long and still would have been too short.

In this dope track OutKast tries to convey that it’s better to smoke a blunt and chill out than to play at being a thug and kill each other over some bullsh**. Hard to argue with that tidbit of wisdom.

“Ah ha, hush that fuss / Everybody move to the back of the bus / Do you wanna bump and slump with us / We the type of people make the club get crunk”

OutKast have always been masters of the chorus, and this hit single has one of the most recognizable hooks off all their songs.

“From the bottom of my lungs a n**** be blowing / Spitting his game / Coming up on ya from the South, the A-T-Liens ain’t changed…”

Smooth, short & sweet, Two Dope Boyz (In a Cadillac) has Andre and Big Boi trading verses in a superior way. The perfect opening song (after a chilling intro) to a perfect album, OutKast’s second classic in a row – proving Southernplayaliticadillacmuzik definitely wasn’t a fluke.

“My mind warps and bends, floats the wind, count to ten / Meet the twin Andre Ben, welcome to the lion’s den / Original skin many men comprehend / I extend myself so you go out and tell a friend / Sin all depends on what you believing in / Faith is what you make it, that’s the hardest sh** since MC Ren / Alien can blend right on in with your kin / Look again, cause I swear I spot one every now and then / It’s happening again, wish I could tell you when / Andre, this is Andre, y’all are just gon’ have to make amends”

Aquemini is a portmanteau of Andre 3000 and Big Boi’s Zodiac signs, Aquarius and Gemini. The title track to their monumental third album has both emcees spitting some fire verses, with 3 Stacks’ last bars being especially epic.

“My heat is in the trunk along with that quad knock / No, my heart don’t pump no Kool-Aid / Jump and you’ll get you sprayed / Who raise yo block? The one and only OutKast…”

The second single from their debut Southernplayalisticadillacmuzik. It’s exactly about what the title tells us: the Southern lifestyle, players, Cadillacs and music – the overall theme of the album.

“Inslumnational, underground / Thunder pounds when I stomp the ground / Like a million elephants and silverback orangutans…”

One of the singles of OutKast’s fourth album Stankonia – which is a masterpiece, as was Aquemini, as was ATLiens, and as was their debut Southernplayalisticadillacmuzik.

B.O.B. is a crazy track, with spitfire rhymes and a head spinning beat – as unconventional as it is brilliant.

“Well it’s the M-I-Crooked letter, ain’t no one better / And when I’m on the microphone you best to wear your sweater / Cause I’m cooler than a polar bear’s toenails…”

The beat, the lyrics, the hook, the vibe: perfection. The title track is just one of the many absolute gems from OutKast’s epic second album ATLiens.

“Ten times out of nine, now if I’m lying, find / The quickest muzzle throw it on my mouth and I’ll decline / King meets queen, then the puppy love thing / Together dream ’bout that crib with the Goodyear swing…”

Without a doubt one one of their most famous songs, with massive mainstream appeal. Great music, great lyrics – simply a pleasure to listen to.

The art of storytelling, indeed. Two lyrically rich tales, ending on a tragic note – it displays both Big Boi’s and Andre’s talent as lyricists. Another OutKast banger.

This 7-minute track features Cee-Lo & Big Gipp of Goodie Mob, who rip it up with Andre & Big Boi on this mid-tempo masterpiece about doing something with your life. The beat, the message: a true testament to the power of Hip Hop.

“Oh yes I love her like Egyptian, want a description? / My royal highness / So many plusses when I bust that there can’t be no minus…”

Jazzy Belle provides a brilliant soundscape, with some serious knowledge being dropped as well. One of the strongest tracks from ATLiens, if something like that can be said about the near flawless album that is ATLiens.

“Ain’t nobody dope as me; I’m dressed so fresh, so clean”

So funky it’s ridiculous. Over a perfect Organized Noize instrumental, Andre and Big Boi show us a coolness and eccentric style only they can get away with. Classic track from Stankonia.

“Halle-lu-jah, halle-lu-jah / Y’know I do some things more different than I used ta…”

The pimped-out classic that started it all. An incredibly important and influential song, as it was OutKast’s introduction to the world and the kick-off of a decade with brilliant OutKast music. A Hip Hop staple, not just for the South.

“Check it, a one-two, a one-two dope n****s in the Cadillac / They call us, went from Player’s Ball to ballers / Putting the South up on the map…”

Another Organized Noize produced musical masterpiece, with a butter smooth bassline and both emcees’ lyrical genius on full display. Andre’s and Big Boi’s stutter-stop flows that don’t necessarily stick to the beat work perfectly, as they always do. The spacey, catchy hook ensures the mainstream appeal, but it still is Hip Hop to the core. True brilliance.