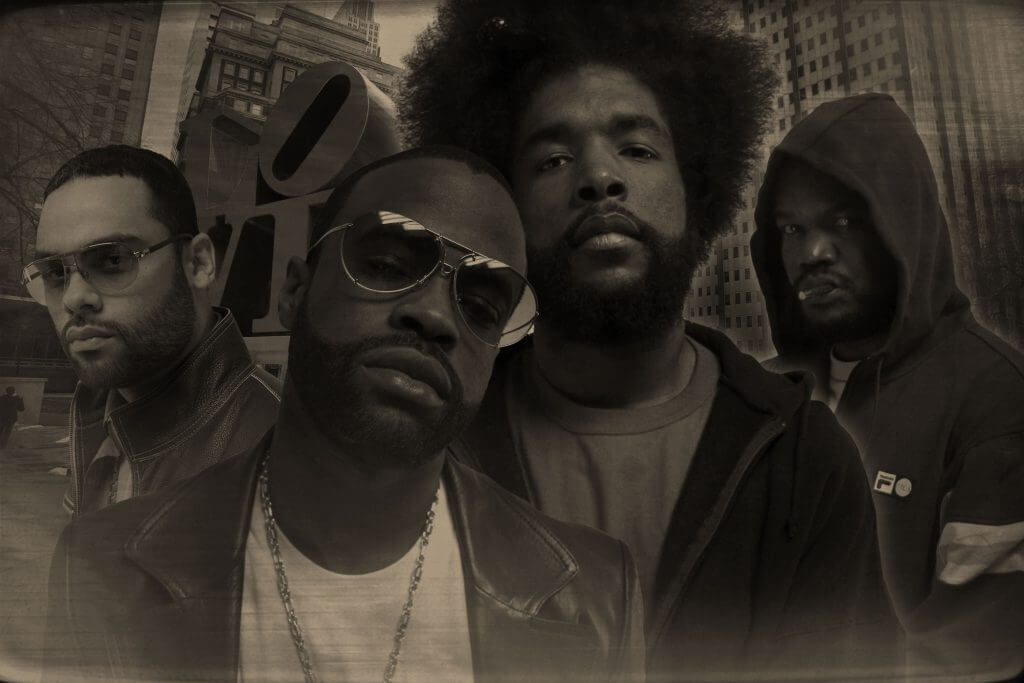 The Roots started out in Philadelphia, formed in 1987 by emcee Tariq ‘Black Thought‘ Trotter and drummer and bandleader Ahmir ‘Questlove’ Thompson. Throughout their whole career, The Roots have captured with style and grace the essence of true Hip Hop, using live instrumentation, intelligent lyrics, and masterful rhythmic engineering. Having Black Thought as the lead emcee – who has to be recognized as one of the greatest emcees EVER – only helps to solidify The Roots’ status as one of Hip Hop elite acts. With a discography so deep as The Roots’, it’s nearly impossible to do justice to their work with a selection of a mere 15 tracks. We compiled a list with 15 of OUR top 15 The Roots songs anyway – if you miss YOUR favorites here, please feel free to discuss in the comments!

“Y’all hopeless, and I’m a little better than dopest / Far from a brand new kid to show biz…”

From the somewhat underrated sixth Roots album The Tipping Point, this is an excellent tribute to two of the greatest emcees ever: Big Daddy Kane and Kool G Rap.

“Boom!” has Black Thought – who is one of the greatest emcees ever himself – ‘impersonating’ Big Daddy Kane and Kool G Rap on the second and third verse, adopting their style, flow, and diction. If you didn’t know any better, you’d think it were actual guest appearances by Kane and G Rap. To know it’s all Black Thought is truly a testament to the man’s virtually unparalleled skills. Great throwback Hip Hop track.

A dope freestyle type song from Do You Want More?!!!??!, it has a young Dice Raw making his Roots debut and what a debut it is. Like Black Thought, Dice Raw spits straight bars over a Rahzel beatbox backdrop – pure Hip Hop.

“Yeah, sitting in the staircase, holding back tears / Looking over mad years worth of photographs / Pictures of some places I ain’t never going back / Some people I used to love, why I ain’t show them that?”

From The Roots seventh studio album Game Theory. A beautiful and hypnotic track that has Black Thought reflecting on years past, broken friendships and regrets.

Black Thought goes HARD on this track. Some may be turned off by the songs straightforwardness, but however you feel about it: there’s no denying this one-take mic attack is just another example of Thought’s unstoppable flow and superior mic skills.

“Yeah, The Square Roots be the setters of examples / Finding rhythm in the static of your samples…”

From their independently released debut album Organix (with Questlove and Black Thought the constants in a line-up that would continuously change throughout The Roots’ existence), this album marked the beginning of an epic career. A bit rough around the edges maybe, but The Roots’ talent for creating organic Hip Hop Jazz is already fully evident here.

“Pass The Popcorn” is one of the highlights from their forgotten debut.

Featuring a verse by Eve and with Erykah Badu on the hook, this is one of The Roots most popular songs, winning a Grammy award in 2000 (for Best Rap Group Performance). A great Hip Hop love song to vibe and chill with.

“Now, go get your dictionary and your Pictionary / Cause much affliction with my diction friction slips and carries / Words and herds like some cattle in the steeple / People, there’s no equal, or no sequel / So policies, of equalities, get abolished / Demolished, distortion of the static’s gettin polished / Urges of splurge and words will just be merged / Together, damn it’s quite clever, however…”

Black Thought and Malik B showing off their lyrical skills over a dope drumbeat. “Distortion To Static” is just one of the stand-outs from The Roots’ second album Do You Want More?!!!??!

“What?? This how we do it in the year for nine-six / With this deliberate attack on pointless rap sh** / Breakin MC’s down to fractions, tell your squadron / It’s time to go to war, Respond/React”

Black Thought kills it as usual on this track, casually attacking fake and wack emcees and showing the true essence of Hip Hop at the same time. Another flawless track from the monumental Illadelph Halflife album.

From their fourth album Things Fall Apart, this is a beautiful ode to Hip Hop. It features guest rapper Common, who builds on his own love declaration for Hip Hop, the classic “I Used To Love H.E.R.“.

“I use the mic to slap you in the face and erase your taste / Disgrace your date put your title to waste / Dominant lyrical grace, from a place called wild / Illadelph Isle Pensy, that’s the residency / Consistent currency, my pockets never empty…”

Just one of the highlights from arguably The Roots best overall album (and that’s saying something!), Illadelph Halflife. Black Thought, Malik B & Dice Raw come out hard on this track, representing themselves and talking about wack MCs. Straight up Hip Hop.

“Well it’s like smack the track up and leave dents in it / The vocalist, busting this blunt instrument spit / The magnificent, rappers run from it / All fly girls’ nipples and toes numb from it…”

Now this is emceeing. It doesn’t get much better than Black Thought and Mos Def, now does it? This is a super dope lyricists track, based on the classic Double Trouble ‘Stoop Rap’ from the 1983 WildStyle movie.

“My words worth like Barnes & Noble / Spit hot flames that’ll harm your vocal / Spit thought name I’m a bomb your local / Neighborness, for a ten-mile radius / Well every ghetto craving this new anthem / My brain unstable and I’m just too handsome / I bang with the best around / Who can test the ground when I finesse the sound…”

Another one for the lyricists. This track has Black Thought spitting fire bars over a dope old-school beat, once again effortlessly showing he is one of the best emcees in the game, ever.

“The skits I kick flows like catfish / And got many emcees on the blacklist / I’m sharp as a cactus plus, quick to bust gymnastic tactics / Us, Roots is really true to that rap sh**”

“You are all about to witness some organic Hip Hop Jazz”. There is no better description possible of The Roots’ second album Do You Want More?!!!??! as Black Thought’s own introduction to the album.

“Mellow My Man” is one of the lead tracks from Do You Want More?!!!??!. The jazz vibes and live instrumentation make this one of The Roots’ signature tracks and a perfect tone-setter for what would turn out to be an epic career.

“I tilt my crown, then blow down a diamond kiss / You need to buy a CD and stop rewinding this / I’m the finalist, shining like a rugged amethyst / And at your music conference, I’m the panelist / Listen close to my poetry, I examine this / Like an analyst, to see if you can handle this…”

This is a delightful braggadocios track, made extra special by the characteristic turntable work from fellow Philly legend DJ Jazzy Jeff. Just one of the many stand-out tracks from one of the Roots’ very best albums Things Fall Apart.

“The principles of true Hip Hop have been forsaken, it’s all contractual and about money makin’”

Taken from The Roots‘ classic third album Illadelph Halflife, this brilliant video (with its subtitles) shows a sense of humor perfectly matches up to the song’s message. Like De La Soul’s 1993 “Ego Trippin’ Pt 2“, the song and the video sarcastically critique the ‘bling bling’ cliches that already started dominating Hip Hop videos back in the mid-1990’s. Classic material, with a message as relevant today as it was 20 years ago.