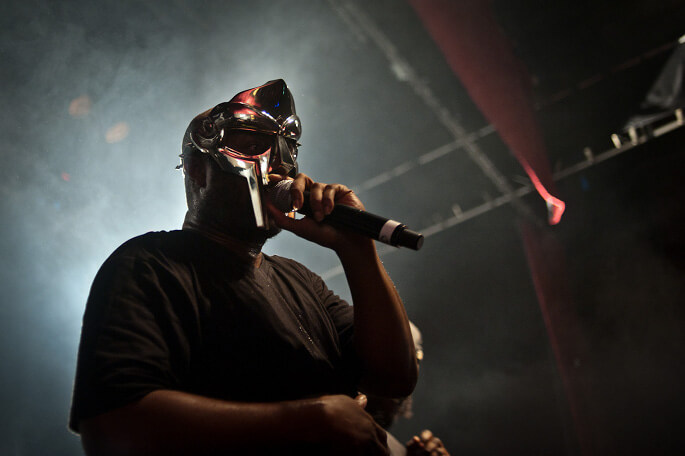 Top 15 MF DOOM Songs: Rappers are perhaps the modern-day equivalent to superheroes, super-villains, and anti-heroes. Projecting their hyperbolic ethos on wax, it’s never exactly clear where the “character” ceases and where the actual human being, behind the microphone, picks up again. Donning a mask to represent the pain his humanity has suffered, the enigmatic MF DOOM has been fusing his thought-provoking intellect with references to comics, cartoons, and monster movies for close to two decades. (Full MF DOOM bio here)

Throughout his career DOOM has put out A LOT of music, using different aliases and working with different musical collaborators. From his post-KMD years (when he still was Zev Lov X and the MF DOOM persona wasn’t ‘born’ yet), we have selected our top 15 MF DOOM songs. Missing your personal favorites? Hit us up in the comments!

“By the way, I re-up on bad dreams, bag up screams in fiftys / Be up on mad schemes that heat shop like jiffy-pop(pop) / In an instant get smoked like Winston Cigarettes / Ho’s get ripped off like Nicorette patch“

Operation Doomsday truly is a landmark Hip Hop album, released in an era when shiny suit bling-bling rap and emptyheaded gangsta cliches were dominating Hip Hop. MF DOOM brought back the essence of true Hip Hop with his debut solo album. Superior creative brilliance – both on the production- and lyrical side – makes this album a staple not just for underground Hip Hop, but for Hip Hop as a whole.

In “Gas Drawls” MF DOOM says “the supervillain, cooler than a million” – and that is a perfect description of this album and what would follow later.

“Can it be I stayed away too long? / Did you miss these rhymes when I was gone? / As you listen to these crazy tracks / Check them stats then you know where I’m at / And that’s that…”

Dropping the MF and going by just DOOM for this 2009 album, the supervillain delivers one of his most consistent albums and one of the best Hip Hop albums of 2009 with Born Like This. Not as classic as Operation Doomsday and Madvillainy, but not far from it. Production and DOOM’s rhymes and flow are on point throughout the whole album and many tracks stand out, this is just one of them.

“It’s like the end to the means / F***** type of message that sends to the fiends / That’s why he brings his own needles / And get more cheese than Doritos, Cheetos or Fritos / Slip like Freudian / Your first and last step to playing yourself like an accordion…”

From one of DOOM’s best, if not THE best, projects: Madvillainy. It’s next to impossible to select individual tracks from that album because the magic MF DOOM and Madlib created can best be described as an immersive experience. To let it totally sink in, you need to start at the beginning and let it run. Like you can’t pick a single chapter to show somebody how good a book is, you really can’t pick any one song of Madvillainy to show its brilliance as a total experience. To represent Madvillainy in this list we picked this track (and the #2), but that’s really short-selling the album as a whole.

“He said broads call me Vaughny / I make sure I throws em back if they’s too scrawny / Or boney, phony MCs use a stand-in / Leave him hangin like if I ain’t know where his hands been”

One of two albums MF DOOM dropped in 2003, one as King Geedorah, and this one as Viktor Vaughn. Both are great (slept on) albums, but different as well. King Geedorah’s Take Me To Your Leader is tight and dope as hell, but could have done a few lesser guest spots. Viktor Vaughn’s Vaudeville Villain features more rhyming by DOOM himself.

Underground, intelligent, and hardcore – like all MF DOOM albums you can keep listening and discover new meanings in his lyrics each time. “Saliva” is one of the many highlights, with DOOM’s trademark oddball lyrics packed in multiple-syllable rhyme schemes – as ever showcasing he is an inspired wordsmith with a raw yet sophisticated flow. Don’t sleep on Vaudeville Villain.

“Render unto Geedorah what is Geedorah’s / Ten to one he sees ya through a beaker and a tweezers / Read the fine print and be like, “What’s the big deal?” / Spun wheels of steel since broke wheel Big Wheel…”

Also from 2003 is Take Me To Your Leader, an album under the King Geedorah alias. According to DOOM, King Geedorah is a space monster, by adopting this persona DOOM is able to give an alien perspective on humans and Hip Hop. This track features some dope rhymes over a kick-ass beatbox beat.

“True, there’s rules to this s***, fools dare care / Everybody wanna rule the world with tears for fear / Yeah yeah tell ’em tell it on the mountain hill / Running up they mouth bill, everybody doubting still…”

Compared to his 1999 classic Doomsday, the concept album (based around food) MM… Food may fall a little short (it’s a bit too short when all the skits are not counted and the production is not as consistent as Doomsday’s), but it still is one of 2004’s best Hip Hop albums. This song is one of the album’s highlights, with a dope performance by guest Mr Fantastik and DOOM dropping a verse laced with Quotables, as always.

“Bust off your straps after Victory Laps / For a rhyme-o-cidal maniac, rap run runners / Kingpin numbers they kick knee-slap skat / Dreidel loose, Villain on the track in your town / Like Ringling Brothers, bring rings around clowns…”

Following up on the great synergy they had on a collaboration track from the 2005 The Mouse And The Mask album, MF DOOM and Ghostface Killah release this dope track – sort of a teaser for a full-length DOOMSTARKS album that fans have been anticipating for over ten years now. Will we ever see it…?

“I only play the games that I win at / And stay the same with more rhymes than there’s ways to skin cats / As a matter of fact, let me rephrase: / With more rhymes and more ways to fillet felines these days…”

A haunting and masterful track from Operation Doomsday – just gotta just love the sampling of that Scooby Doo villain instrumental!

“Head on straight, mask on crooked / Exit stage left, with the cash gone took it…”

Danger Doom is an excellent collaboration album by Danger Mouse and MF Doom. The album consists almost entirely of raps by MF DOOM, performed over beats crafted by Danger Mouse. This track guests Ghostface Killah, who has great synergy with MF DOOM. If only that DOOMSTARKS album ever sees the light…

“DOOM was always known to keep the best girls’ backs bent / Some say it’s the eyes, some say the accent…”

“Hoe Cakes” shows us MF Doom at his best, playing off the beat with its “Super!” sample. A funny take on ‘sex rhymes’, done in MF DOOM’s trademark oddball style. Super!

“I sell rhymes like dimes / The one who mostly keep cash but brag about the broker times / Joking rhymes, like the “Is you just happy to see me?” trick / Classical slapstick rappers need Chapstick…”

A signature DOOM track, which has him free-associating all over the place. One of the best lyrical tracks in Hip Hop, bar none.

“King Geedorah, take me to your leader / Quick to claim that he not no snake like “me neither” / They need to take a breather / He been rhyming longer than Sigmund the sea creature…”

Take Me To Your Leader is sorely slept on – a tight, cohesive album filled with classic DOOM tracks. This is one of the stand-outs and features one of DOOM’s best verses ever over an epic beat.

“Villain man never ran with krills in his hand and / Won’t stop rockin’ til he clocked in a gazillion grand / Tillin’ the wasteland sands / Raps on backs of treasure maps, stacks to the ceiling fan…”

The opening track of his 2009 album Born Like This has DOOM going off like crazy and showing everybody he still is on top of his game. With the changing beat and DOOM’s impeccable flow, this one is a surefire classic.

“Just remember ALL CAPS when you spell the man name…”

Perhaps the easiest accessible track on the monumental Madvillainy album and therefore the best suited to pick as an individual song to show the epicness of DOOM’s and Madlib’s classic collaboration. In his trademark abstract way, he conveys a quite simple message: always remember it’s MF DOOM, not MF Doom. All Caps.

“I used to cop a lot but never copped no drop / Hold mics like pony tails tied in bobbalobs / Stop and stick around, come through and dig the sound / Of the fly brown 6-0 sicko psycho who throws his d*** around…”

The title track of DOOM’s Operation Doomsday is the perfect opening track to an epic album. Masterful sampling, dope scratching, and excellent emceeing over a delicious beat – simply flawless.