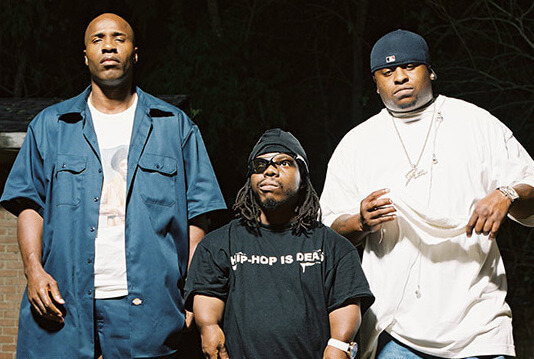 Though the controversial subject matter of gangsta rap wasn’t much of a barrier to popular success during the ’90s, the Geto Boys’ recordings proved almost too extreme for widespread exposure. Blocked from distributing their 1990 major-label debut by Geffen — who insisted that a track dealing with necrophilia as well as murder was a step too far – the group’s label, Rap-A-Lot Records struck a deal with producer Rick Rubin, who arranged another distributor for the album, released on his own Def American label.

The controversy, which occurred two years earlier than similar censorship incidents involving Ice-T and 2 Live Crew, gave the Geto Boys a large amount of publicity. Their follow-up, We Can’t Be Stopped, eventually hit platinum, though the trio of Scarface, Willie D., and Bushwick Bill began to fracture by 1993. After releasing solo albums during the mid-’90s, the Geto Boys reunited in 1996 for one of their most praised albums, The Resurrection. (Bio continued)

For this list, we selected our top 15 Geto Boys songs. Are you missing your personal favorites? Don’t worry – just let us know in the comments!

A track from the The Geto Boys remix album, on which Rick Rubin worked his magic. All tracks on that 1990 album were revamped versions of songs that appeared on Grip It! Ont That Other Level from 1989 (plus a new version from ‘Assassins’ that appeared on Geto Boys’ 1988 debut album Making Trouble).

Two new tracks were included on The Geto Boys: ‘Fuck Em’ (see later) and ‘City Under Siege’.  ‘City Under Siege’ has the Geto Boys linking the drug trade from the street level to the government’s highest levels, while addressing police brutality at the same time. Great song.

Boom! The opening track of Geto Boys’ third album pulled no punches. The song is about them being banned by Geffen Records after the controversy that their previous album Grip It! On That Other Level sparked. The Geto Boys let it be known though that they can’t be stopped!

“Seven years old, I’m lookin up to the gangstas in the hood / Cause to me and my cousins, yeah, they represented good / Even when we played cops and robbers on the block / Nobody wanted to play the cop, dig it…”

Although the 1993 album Till Death Do Us Part was missing the raw power Willie D brought to the Geto Boys table, Big Mike proved to be a more than adequate replacement. On this track, Big Mike enlists the help of Convicts partner 3-2 to deliver a laidback, dope-ass track, sonically typical for the South.

“I’m back like a rebel ‘making trouble’ / I’m an Assassin, kickin a*s on the double / No motherf*cker alive’s gonna stop me / So f*ck you and your godd*mn posse…”

Released not long after Straight Outta Compton, Geto Boys’ second album Grip It! On That Other Level was every bit as controversial AND good as N.W.A.’s monumental classic, but never as widely celebrated.

Grip It! On That Other Level boasted excellent production all around (mostly by DJ Ready Red) and shocking lyrical imagery. Geto Boys had arrived in their most famed line-up and established themselves as an act to be reckoned with, arguably the most controversial and infamous Hip Hop act of their time.

‘Do It Like A G.O.’ was the album’s only single, a hard-hitting track and fan-favorite to this day.

“Mr. Officer, crooked officer / I wanna put your a*s in a coffin, sir / Cause you done f*cked with n****s like myself for too long / It’s time to grab my motherf*cking nine and get it on…

Geto Boys’ response to police brutality, taking it a step further than N.W.A. did in ‘Fuck Tha Police’. It can be seen as a precursor to Ice T’s infamous ‘Cop Killer’, as the teasing chorus by Big Mike leaves no doubt about what the Geto Boys think would be a suitable reaction to racial profiling and police violence against young black males.

Watch the intro to the video and understand they talk about bad cops, not good police – so about ‘killer cops’, not ‘cop killers’.

From 2005’s The Foundation, this Scarface-produced cut perfectly brings back that old Geto Boys chemistry with some dope-ass lyrics from Scarface, Willie D and especially Bushwick Bill.

“Got happy with the trigger, now I’m on the run / An assassin…”

The revamped version of 1988’s ‘Assassins’ track. One of the first ‘horrorcore’ songs ever, with crazy lyrics full of over-the-top murder and mayhem fantasies. Fun and disturbing at the same time, it sounds dope as hell because the instrumental is BANGING.

The first full track off their 1996 album The Resurrection. The song is maybe even better known for being featured in the 1999 comedy ‘Office Space’ (like Damn It Feels Good To Be A Gangster).

The Resurrection and ‘Still’ sees the return of Willie D to the group and a rekindling of the special chemistry he always had with Scarface and Bushwick Bill. ‘Still’ simply tells the world that nothing has changed since their last album together, and is extra memorable because of the eery soundscape provided by Rap-A-Lot in-house producer N.O. Joe.

“To every motherfu*cker who diss my crew / I’m sayin f*ck you, now what you hoes wanna do?”

The opening track of the The Geto Boys remix album, one of the two tracks that didn’t appear on any previous album. Lyrically and sonically one of the hardest Hip Hop tracks ever. Signature Geto Boys.

“Damn it feels good to be a gangsta…”

This track first appeared as an extra track on the 1992 greatest hits compilation Uncut Dope, and it became one of the Geto Boys most famous songs when it was featured in the 1999 ‘Office Space’ movie.

Funny last verse by guest rapper J-Prince, who impersonates the President of the US: “Cuz now I got the world swingin’ from my nuts
… And damn it feels good to be a gangsta”

“Nobody knows my name, they’ll only know this face / And ask my posse, they say, “We call him Scarface”…”

‘Scarface’ is a solo track by Scarface, off the Geto Boys’ second album Grip It! On That Other Level. Laced with samples from the classic Al Pacino-starring Scarface movie, this is gangster story that served as a perfect introduction to the rapper Scarface and a prelude to an epic musical career.

‘The World Is A Ghetto’ is one of Geto Boys more socially conscious songs. Together with ‘Still’ part of a strong opening salvo of the strong comeback album that was 1996’s The Resurrection.

An emotional song about dead friends from the Till Death Do Us Part album, with heartfelt verses from Scarface, Bushwick Bill and Big Mike.

“Think this is harsh? This ain’t as harsh as it gets / No telling what’s being thought up in the mind of a lunatic”

One of the extremely controversial tracks that earned the Geto Boys their infamy. Together with ‘Assassins’ of the 1988 album Making Trouble, this track was one of the first ‘horrorcore’ raps where psychopathic fantasies were described.

Two versions with slightly different lyrics and musical backdrops exist: the original one from the Grip It! On That Other Level album and this revamped version from The Geto Boys remix album. Both are dope as hell, this remix version just edges the other.

“At night I can’t sleep, I toss and turn / Candlesticks in the dark, visions of bodies being burned / Four walls just staring at a n**** / I’m paranoid, sleeping with my finger on the trigger…”

Could there be another choice for the top spot on this list? Of course not. This is not only Geto Boys’ signature and very best track but one the very best tracks in Hip Hop EVER.

Check Brian Coleman’s Check the Technique: Liner Notes for Hip-Hop Junkies for the story behind ‘Mind Playing Tricks On Me’ (and the other tracks on We Can’t Be Stopped).