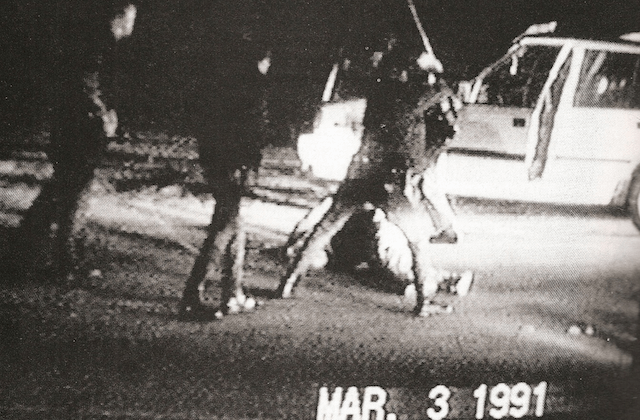 Top 10 Hip Hop Songs Against Police Brutality: There’s a long tradition of protest songs against misconduct by police, even way before Hip Hop. From J.B. Lenoir’s “Alabama Blues” in 1965 to Marvin Gaye’s “Inner City Blues (Makes Me Wanna Holler)” in 1971, from Gil Scott Heron’s “No Knock” in 1972 to Rick James’ “Mr. Policeman” in 1981, and countless others before, later and in between – music has always been an important way to express discontent about police misconduct.

When Hip Hop emerged as a major musical and cultural force, with it came outspoken artists who weren’t afraid to speak their minds about societal problems. As police misconduct has always been an issue, especially for inner-city youths and minorities, it was only logical Hip Hop would become one of the major vehicles to express outrage.

For this list, we have selected 10 of the best Hip Hop tracks dealing with racial profiling by police, racist cops, and police brutality. Are there songs missing you feel should have been included? Let us know in the comments!

Geto Boys’ response to police brutality, taking it a step further than N.W.A. did in ‘F*** Tha Police’. It can be seen as a precursor to Ice-T’s infamous ‘Cop Killer’, as the teasing chorus by Big Mike leaves no doubt about what the Geto Boys think would be a suitable reaction to racial profiling and police violence against young black males.

Watch the intro to the video and understand they talk about bad cops, not good police – so this is about ‘killer cops’, not about ‘cop killers’.

“What the hell are you lookin for? / Can’t a young man make money anymore? / Wear my jewels and like freak it on the floor / Or is it my job to make sure I’m poor?”

Even if LL Cool J nowadays is better known for his acting and mainstream celebrity status, he was a Hip Hop pioneer and will always be a Hip Hop icon. Always having songs for the mainstream and the ladies, LL also dropped plenty of real Hip Hop. His fourth album Mama Said Knock You Out undoubtedly is one of his very best, and this track is a typical account of what a black man driving a nice car has to endure.

“They got me trapped / Can barely walk the city streets / Without a cop harassing me, searching me / Then asking my identity / Hands up, throw me up against the wall / Didn’t do a thing at all…”

“[Blam] Aww sh**, another young brother hit / I better go over my man’s crib and get the pump / Cause to the cops, shootin brothers is like playin baseball / And they’re never in a slump…”

“They clocking, shocking and knocking me / Wantin’ a reason for whocking me / But I ain’t committin’ no crime / Soon as they stoppin me O.C. roll if a dolo went solo / Cop car come screechin in my presence in a second yellin “Freeze!”…”

From the supremely underrated 1994 Word… Life album, this is another typical tale of unjustified police profiling with a dope KRS One sampled hook.

“99 Problems” is the third single from Jay-Z’s The Black Album. The epic beat is provided by Rick Rubin and the chorus hook “I got 99 problems but a bitch ain’t one” is taken from the Ice-T single “99 Problems” from the album Home Invasion (1993).

The second verse is a fictional account of racial profiling by the police, but it is based on a true story.

Even as the son of a police officer, Killer Mike does not shy away from being very outspoken about police oppression. In this track, that is clearly based on and influenced by N.W.A’s “F*** Tha Police”, Killer Mike pulls no punches in typical fashion.

Another track that is as relevant today as it was over two decades ago, in this classic cut KRS One addresses police brutality specifically directed at black people, cleverly linking the days of slavery to the way police acts in these modern times. Poignant, powerful and (unfortunately) still relevant.

One of the originators of West Coast gangsta rap, Ice-T co-founded Body Count in 1990 as an outlet for his love for metal. So while musically this song may not qualify as Hip Hop, Ice T is Hip Hop – that’s why this now legendary track is included in this list.

Some may disagree with how Ice-T & Body Count put the message out there, but the song was a definite response to police brutality. The song became huge, not in the last place because even President Bush Sr. spoke out against it, providing the best advertisement money can buy and making Ice-T one of Hip Hop’s first free-speech martyrs at the same time.

In Ice-T’s own words (from this 1992 New York Times piece): “The song is fiction, not fact. I’m singing in the first person as a character who is fed up with police brutality. I ain’t never killed no cop. I felt like it a lot of times. But I never did it.”

“F*** the police! Comin’ straight from the underground / A young n**** got it bad ‘cause I’m brown / And not the other color, so police think / They have the authority to kill a minority…”

Perfectly capturing the mindset of a generation of young black males tired of police brutality in just three words, this N.W.A classic may just be one of the most controversial songs in Hip Hop ever – and a hugely influential one.