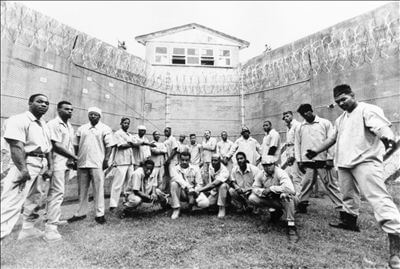 “What up kid? I know s*** is rough doing your bid / When the cops came you should have slid to my crib…”

An emotional highlight on Illmatic, Nas’ verses are not really ABOUT prison but basically a letter to his homie IN prison. The atmospheric xylophone beat-backdrop is provided by Q-Tip, whose voice also echos on the chorus.

“Dear mama, they sentenced me to death / Today’s my final day, I’m counting every breath / I’m bitter cause I’m dying, so much I haven’t seen / I know you never dreamed, your baby would be dead at 16…”

Written and recorded in 1992, this track was one of the many posthumous 2Pac releases and included on the R U Still Down album. It relates the story of a young street thug who gets caught and locked up. With his typical passion and anger, 2Pac shows us the hopelessness and almost inevitable fate of many inner-city youths.

From Capone-N-Noreaga’s 2000 album The Reunion. The song has Noreaga conversing with Capone on the phone while Capone is in prison, – over a dope L.E.S.-produced instrumental.

“No more indo, gin and juice / I’m on my way to Chino, rolling on the grey goose / Shackled from head to toe / Twenty-five with an izz-el, with nowhere to gizzo…”

Snoop Dogg at his best, with top-notch production from Dr Dre to back up his (almost auto-biographical) storytelling. Classic.

Ludacris’ output has always been a mixed bag – he is capable of dopeness, but also of poppy wackness. This is a dope track however, on which guests Beanie Sigel, C-Murder, and Pimp C explain what they went through during recent prison stints.

Some hardcore stuff from 50 Cent’s cousin Continental Five a.k.a. Two-Five. Listen to this song and know prison is a place you don’t want to end up in.

“Just to hear the name it makes your spine tingle / This is a jungle where the murderers mingle / They say the place is crowded but there’s room for you / Whether you’re white or you’re black, you’ll be black and blue…”

This Marley Marl-produced track from Kool G Rap & DJ Polo is one of the hardest Kool G Rap has ever done. And it sends a clear message too: stay out of prison – “cause you won’t be smilin’ on Riker’s Island”.

“I got a letter from the government the other day / I opened and read it, it said they were suckers / They wanted me for their army or whatever / Picture me giving a damn – I said never…”

The last song of Ice-T’s 1991 classic Original Gangster paints a harrowing picture of being incarcerated. The haunting and ominous instrumental perfectly enhances the lyrics.

“I used to have a name, but now I got a number / I used to put suckers six feet under / Now I’m in jail, no longer a rebel / You can’t tell me a damn thing about the ghetto / I’ve been there…”

While other artists have written songs about prison that did not necessarily relate their own, real-life experiences about being incarcerated – this was a group formed in prison, by real inmates who were all serving sentences of 25 years to double life.

Recorded At East Jersey State Prison, New Jersey – this is a powerful message from the inside, telling listeners to wisen up and stay out. “This record ain’t no joke – learn at the expense of our sorrows and don’t end up in the belly of the beast.” This is the real deal.