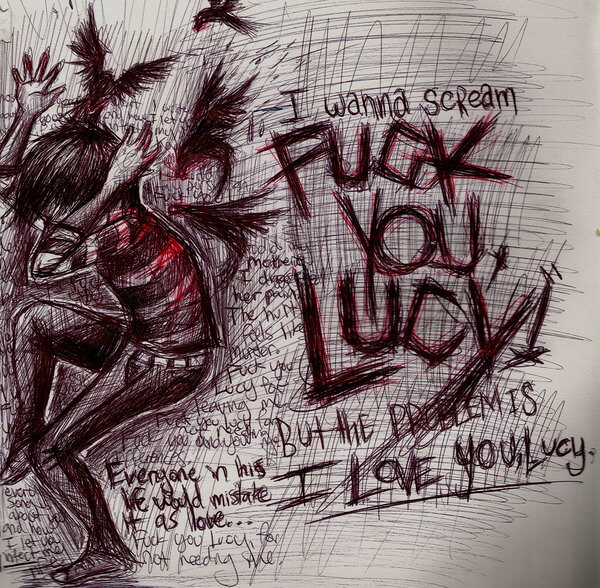 “Relationships can grip with the pain / Arguments in the crib, in the streets, on the train / I’m crazy fed but then still / When she ain’t there I feel sad, I feel ill”

A smooth track from Gang Starr‘s classic second album Step In The Arena. Guru tells us about how difficult it is to maintain a relationship, especially with one you love.

Fabolous has no shortage of songs that deal with his feelings and emotions. This track of his 2011 mixtape The Soul Tape is a prime example.

Teenage Love is the first single released from Slick Rick‘s 1988 debut album, The Great Adventures of Slick Rick. The song deals with first infatuations and the powerful feelings of love and loss that go with it.

“I can understand why you want a divorce now / Though I can’t let you know it, pride won’t let me show it / Pretend to be heroic, that’s just one to grow with / But deep inside a n**** so sick…”

Jay-Z talks about his lifestyle as a player but shows he can be hurt by a bad break-up, even if it is a result of his own actions.

“It started getting deep. I kind of felt closed in / I went out and made a stupid mistake / I stopped returning calls, went on a few dates / Of course  it got back to where I knew she’d be hurt / But she didn’t even trip and that made me feel worse / She showed me all that love after I did her dirt / Now I’m feeling like I’m the scum of the earth / She left for break, and didn’t leave her number / I thought about her every single day that summer / A sucker, for trying to keep it on the under / Said next time I see her, I’mma tell her that I love her…”

Maybe not a break-up song in the strictest sense of the word, but one with a devasting emotional ending nonetheless. Few do this kind of thing better than Murs does.

“I’ll still see something that reminds me of her / I got so used to her that without her my mind is a blur / She found somebody quick, I won’t find another for a while / She was about to be my wife and mother of my child…”

From SouthernUnderground, the second album from underground Hip Hop trio CunninLynguists, Rain deals with the pain that (cheating in) relationships can cause.

“So I decided one day, to tell her my feelings was true / I couldn’t live without her so I told her, facing my fears / But honey’s only response, was a face full of tears / She could only sob hysterically, holding me tight / I tried to speak, but she wouldn’t stop until I left sight / I felt like a moth who got himself too close to the light / Except I didn’t burn, I turned cold after that night…”

Powerful and personal. This is another track that may not be a break-up song in the ‘bad relationship’ sense of the word, but it deals with a break-up over a more dramatic reason, which makes the song all the more heartfelt.

“Or maybe I should I walk away / And cut all the ties / Stay on the rise / Leave love left where love dies / We were youngsters / But we’re older now / But the world is a little more colder now / And I’m just trying to get it all off my shoulder now / Baby, you can hold it down / I’ll see you in the wind…”

Criminally underrated emcee Aceyalone drops gem after gem since his solo debut in 1995, this song is just one of his many, many quality tracks.

“I’m too proud to beg, but I’m hoping that you not / I would take you back quick, girl, without a second thought / But I’m caught up in my pride and I can’t make the call / Didn’t want to break up, just a break, that’s all / It’s been a long time, I know I probably shouldn’t have left you / Cause your the only woman that I wanna sleep next to…”

Another Murs track in which he is not afraid to show his feelings. Do you know these love-hate kinds of relationships? Then this is the song for you.

Lucy [Ford] / Lucifer, the subject of this emotional song, may refer to Slug’s former girlfriend. The subject could also be Hip Hop, or alcohol. However it is interpreted, the song is heartfelt and will strike a note with many dealing with a bad break-up. Powerful.