All Eyez On Me: 20 Years Later

What’s the deal peeps?! As you can see by reading all these salutes, there were a lot of amazing, landmark releases that dropped in ’96. Some were more breakout than others. This particular album marked the stamp of an icon in Hip Hop. This album officially put the troubled yet passionate artist as an official worldwide star. Too bad he didn’t live long enough to really see the impact he made on Hip Hop and music in general. 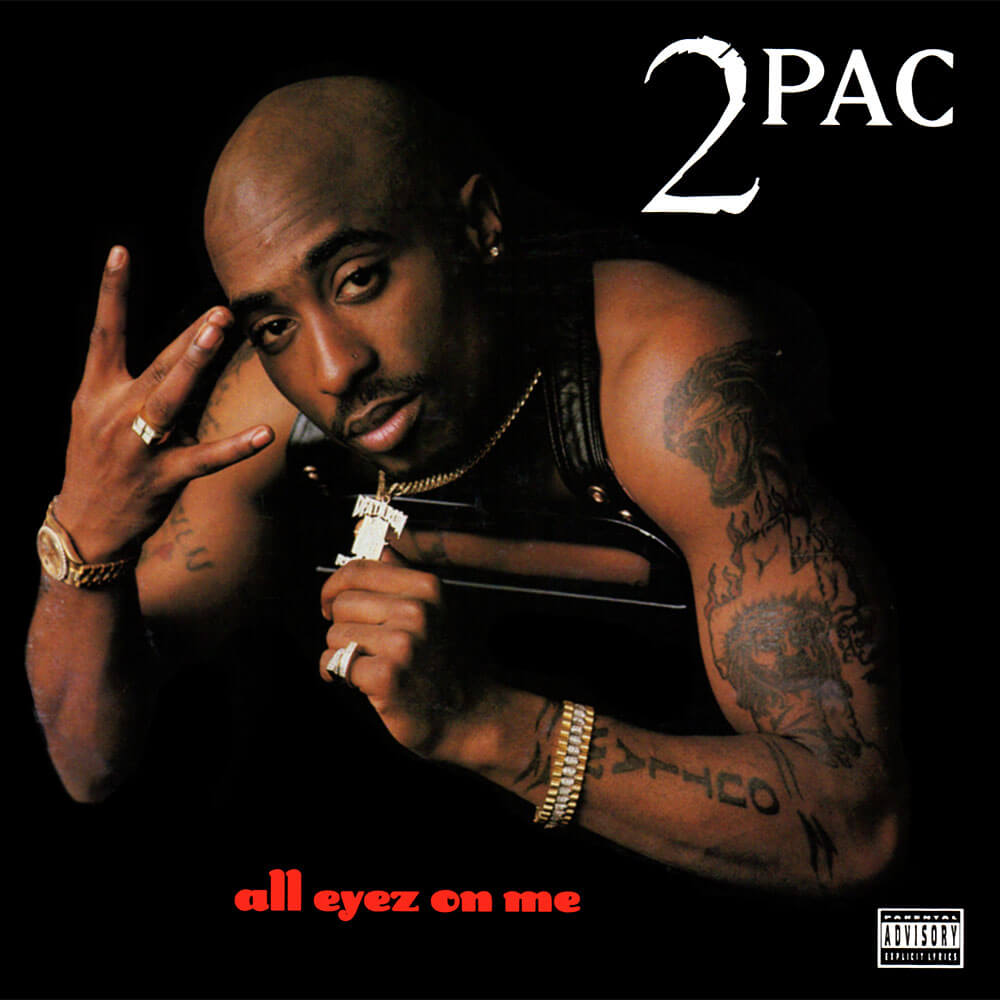 We were all intrigued by this cat named 2Pac, who had a cut called “Trapped” and another banger called “When My Homies Call”. We got a dose of his deep affection for the Black woman on the wrenching “Brenda’s Got A Baby” (how disturbing was that video with the blood-soaked white sheet covering the presumed body of Brenda?). All came from a dope debut album, 2pacalypse Now, which marked the promising beginning of what would become a career like no other.

He returned with the more angst-ridden and socially-charged Strictly 4 My N.I.G.G.A.Z., which brought us classics like “Keep Ya Head Up”, “I Get Around” and “Holla If Ya Hear Me”. This album also marked the first time Ice Cube and Ice-T did a collabo together, and man was it FLAMES.  This album was his breakout album and was his first trip into platinum land.

Then, we saw a series of unfortunate events for Mr. Shakur. First the shooting in the Manhattan recording studios where he was hit five times. This was followed by his incarceration for alleged sexual assault. It was during his incarceration his most acclaimed and most personal album emerged, Me Against The World.  It was the most introspective we had ever seen or heard him. He was vulnerable in this album, at times reflective. To this day, this album stands as his crowning conceptual achievement. He once again went platinum, only this time it was tripled with cuts like the eerie and gloomy “So Many Tears” and Hip Hop’s timeless ode to mothers “Dear Mama”. Many asked if he could outdo himself.

We got that answer that next year with All Eyez On Me, his first album since posting bond and his Deathrow Records debut. When news spread that he was part of the house Dre, Suge, and Snoop built, the album title fit perfectly because all eyes were officially on him to push the label further into the stratosphere. The levels of anticipation for the album were as high as any album that had to come out during this time.

Then the bomb got dropped in the form of the Dr. Dre-assisted “California Love”. This Cali anthem officially marked the return of 2Pac, and his launch into mega-stardom. Based upon that one single, the album went gold within a week of its release. It took only two weeks for it to hit platinum. With subsequent hits that followed like the dope Snoop-collaborated “2 Of Amerika’s Most Wanted”, the sexy K-Ci & Jojo-assisted “How Do U Want It”, the melancholy “Life Goes On”, the sure shot hit “All About U”, and the touching “I Ain’t Mad At Cha”, All Eyez On Me became one of Hip Hop’s quintessential smashes.

Let’s take into account that this was a double album. Did this album have flaws? Yes, it did. I won’t say this was a flawless album, but up to that point it was the most incredible, star-making album 2Pac had delivered. This was perfect Pac in every sense. The production matched his mood and his concept for every song on the album, and it was the completest 2Pac album ever recorded. This literally had something for everybody, and I mean everybody. It had that gangsta s*** with cuts like the fire collab with Tha Dogg Pound, Redman, and Method Man “Got My Mind Made Up”, the cut for the ladies with the aforementioned “How Do U Want It”, and something for the dance floor with the aforementioned “All About U”.

Easily his most recognized album and most commercially celebrated, it officially made him a household name. Tragically, he lost his life on September 13 of that year due to multiple gunshot wounds so he didn’t fully get to see the fruits of his labor. It was two days after his death when the video for “I Ain’t Mad At Cha” got released, and is among the most ominous and saddest videos in all of Hip Hop mainly based on the timing of its release and how it was very eerily foreshadowing.

All Eyez On Me album skyrocketed in sales even more after his death. By this time his Makaveli project was about to drop, which was less about the party and more about unleashing verbal destruction upon enemies such as Nas, Biggie, Mobb Deep, Jay-Z and others. All Eyez On Me, however, was about celebrating life and about feeling reborn after going through a bad time with jail time, a shooting, and other troubling times. This was his sunshine after the rain, and it showed in how much of a groove you’re constantly in.

In 2014, the album was officially a diamond-selling album, selling over ten million units, making it one of the successful commercial Hip Hop albums of all-time. It became a benchmark, not just for west coast Hip Hop, not just for Hip Hop – but for music. He was the every man on this album. We saw all sides of him in such a human yet freeing way. You can see him smiling through the whole recording process of this album. Some have said that if you put the best tracks from this double album into one whole full-length, you would have an even more landmark piece of music. That’s quite okay, but this version fits us just fine. While we knew that 2Pac was a highly important emcee for Hip Hop prior to this album, All Eyez On Me made him a legend. Later posthumous albums made him an icon.

On the twentieth anniversary of this ageless album, we salute the late, great Mr. Shakur, and his legacy that peaked with this fantastic piece of work. We pour out our own liquor to your memory.