Article May 12 2018 Written by Keith Fairburn 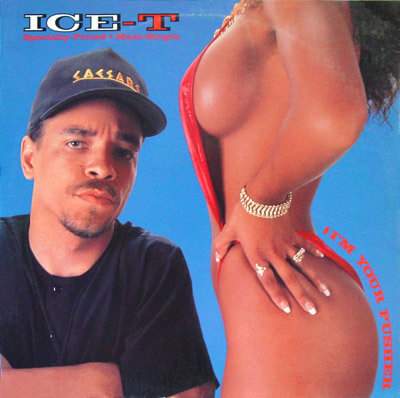 Ice T – I’m Your Pusher – Why Would You Want To Listen To That?

“It’s all about drugs”, “Typical rappers talking about drugs” This has the sound of just another big boasting brag-rap song about selling drugs and how doing drugs is cool. A casual listen will pick up multiple references to dope and getting high – obviously along with the chorus from Curtis Mayfield’s Pusherman. Even if you’re not familiar with the original song you can pick up comments on selling in alleyways and hear what it’s trying to get at. Why would you want to listen to a song that’s glorifying being on drugs?

The rap criminals, we’re on the rise up
We’re selling dope ’til we’re succeeded

It really doesn’t take much to figure out what this song is about. It’s completely through-and-through an anti-drug song. When Ice T mentions dope here he’s referring to his dope beats and lyrics. He literally says it in the first verse, in fact let me share the follow up line to the lyrics I included above:

Dope beats and lyrics, no beepers needed
For this drug deal, I’m the big wheel
The dope I’m selling, you don’t smoke, you feel

This is an absolutely class song. Ice T is talking throughout about the feeling you get from listening to music, how it can make you feel high, and why would you need drugs when you’ve got good tunes? He mixes in metaphors about him being the dealer (because he’s the rapper and the one selling the rhymes), and his DJ, Evil E, being in the lab creating the drugs, the way he’s creating the songs. He continues with lines about checking it all for purity, not mixing in any crap, with the hope that you can handle how potent it is. That’s just quality. In fact:

If it ain’t potent, we remix it and spike it
To bring you the pure dope, not a noose and a rope
Because if you’re doing crack, you’re on death row

YES! what happened to the days where rappers would call you a punk for doing crack, rather then tell you how cool it is to be on drugs? This song is lyrical gold, and really is an example of Ice T not getting the praise he deserves for being an innovator! I’m trying not to get too carried away and post up too many lyrics, but they are just brilliant:

Out on the dance floor, on my world tour
I’m selling dope in each and every record store
I’m the king pin when the wax spins
Crack or smack will take you to a sure end
You don’t need it, just throw that stuff away
You wanna get high? Let the record play

Seriously, who can’t relate to that feeling from good music? This song is 100% spot on.

ALSO, there’s a really funny break in the middle of the song where Ice T is selling more dope to a buyer, from Eric B & Rakim to Doug E Fresh. He offers the guy some LL Cool J but the guy refuses. I’ve got massive respect for LL, love him as a performer and it goes without saying that he’s one of the best of all time, but honestly I laughed out loud the first time I heard that, and still find it funny when I hear it. I guess this was around the time that LL released I Need Love so it was cool to bag on him for being soft. If there’s any other history between LL Cool J and Ice T that I’m unaware of though I’d love to hear about it!