“Alwayz Into Somethin'” is a 1991 single by N.W.A, performed by Dr. Dre and MC Ren featuring Admiral D from their second full-length studio album, Niggaz4Life. The song also appeared on the N.W.A’s Greatest Hits album and The Best of N.W.A: The Strength of Street Knowledge.

The song is an early example of G-funk produced by Dr. Dre. His commercially successful solo debut, The Chronic, further developed the subgenre with beats, samples, and instrumentation similar to the one used in “Alwayz into Somethin'”.

In a part of the lyrics, N.W.A disses O’Shea “Ice Cube” Jackson in the line, “Dre I was speakin’ to your b**** O’Shea”, referring to Ice Cube leaving the group over royalty disputes. 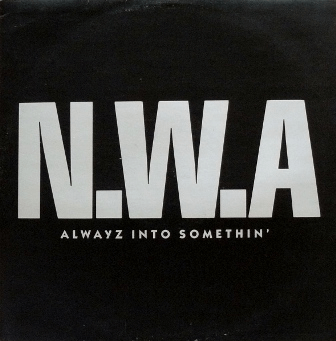