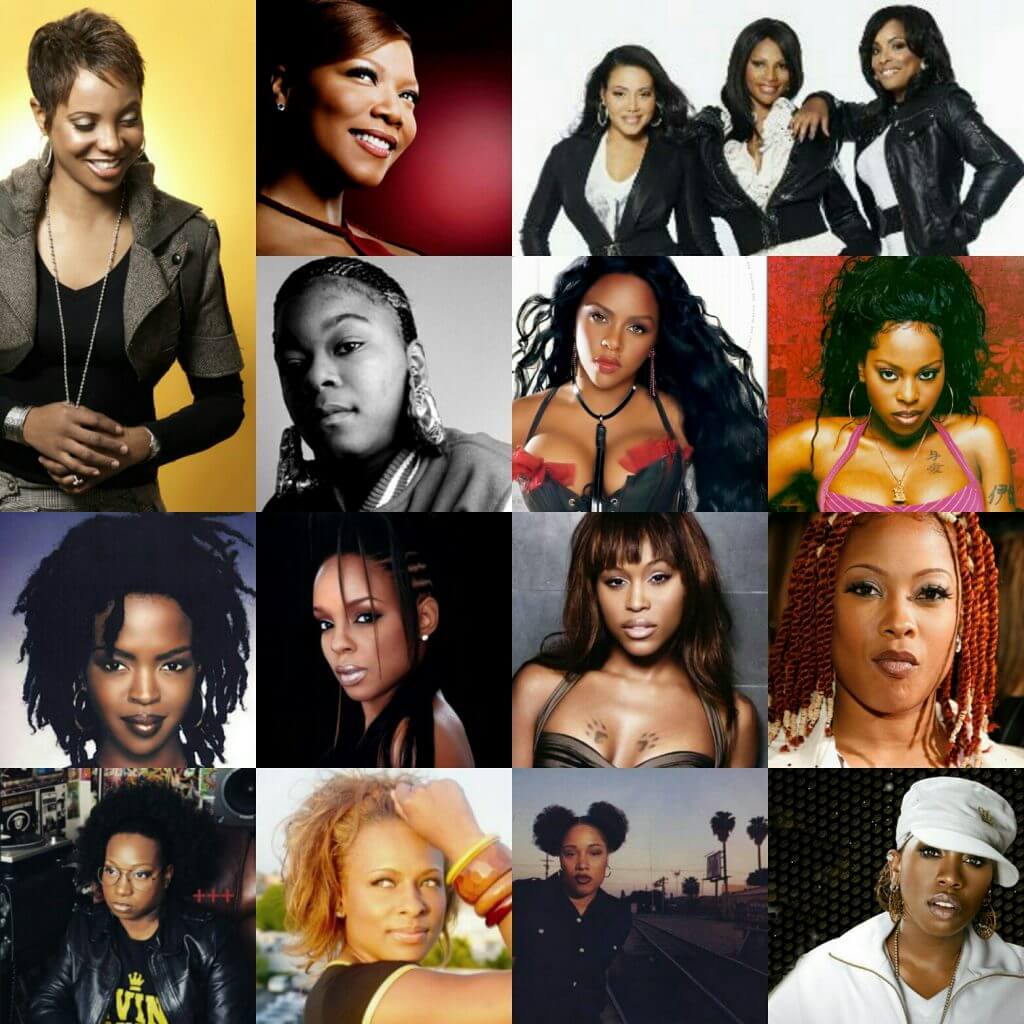 Hip Hop has always been a male-dominated genre and sometimes I feel like the women in Hip Hop don’t get enough credit and are often overlooked when it comes to top ten and greatest rappers lists. I also feel like in this generation there are barely any women in Hip Hop anymore. (Shout out to the few that are still doing it for the ladies.)

Being a young woman myself I’ve always looked up to Salt N Pepa, Queen Latifah, Lady of Rage and others. I want to remind people of the women that ran the game and still do till this day. So here are my personal top ten favorite ladies in Hip Hop.

Eve‘s 1999 debut Let there be Eve…Ruff Ryders’ First Lady did so well, it was the third album by a female rap artist to top the Billboard 200. Eve’s style was so different, she knew how to be hardcore and a lady at the same time. She knew how to stand out in a crowd that’s why she gets this number 10 spot.

‘Who’s That Girl’ was released in 2001 and it was the first single taken from Eve’s second album Scorpion, which was huge success peaking at #2 on the Billboard hot 100.

Wow, this Chicago native was on another level. She was often looked at as a ‘female Snoop Dogg’, her gangsta persona and her laid back rhymes made her one of a kind. Her debut album Funkdafied came out in 1994, selling one million copies – making her the first female solo rap act to have a platinum-selling album.

MC Lyte was rugged, raw and uncensored which is what I loved about her. She could easily win in a battle rap – that’s what made her great. This 1993 hit was a classic anthem and showed how much women love their bad boys!

Left Eye was a part of one of the biggest female groups of all time. Some may say she was ‘Pop’ but no – she was Hip Hop. When she rapped you could tell she didn’t care about what people thought of her, you could feel the realness coming out of her sweet voice. I loved her energy, her craziness, her style it was so unique that’s why she deserves a spot on this list.

What about your friends was the third single on TLC’s debut album ooooohhh… On the TLC Tip which came out in 1992. The album peaked at number 14 on the billboard 200 and was certified quadruple platinum in 1996.

Lil Kim introduced a new type of female rapper. She was often looked at as the female version of Biggie Smalls when it came to her flow. She wasn’t afraid to be sexy, she showed the world that could rock a bikini and out rap your favorite rapper at the same time.

The 1996 release Hardcore debuted at number 11 on the billboard 100 making the Queen Bee have the highest debut for a female rap artist at that time.

You can’t play with my YO-YO! That’s right you can’t play with her, because this lady from South Central gave us a different type of Hip Hop. Her music advocates female empowerment and she talks about the sexism found in Hip Hop. She was so gangsta with it while still being an intelligent black woman.

This Queen was so raw. Queen Latifah rapped about the real issues black women had to face she was never afraid to speak her mind, she was just so real.

This 1993 release shows you just how real she is. Black Reign was her most successful album peaking at number 60 on the billboard 200, with the first single ‘U.N.I.T.Y.’.

This Jersey native was one of the originators of singing and rapping. Ms Lauryn broke barriers, especially being in The Fugees, a group with her and two men. It would be easy to think that she would be overlooked – but no she stood out, especially with her only solo release The Miseducation of Lauryn Hill which came out in 1998.

Her style was a mix of Hip Hop, reggae, and soul. Her rhymes really made you understand a woman’s representation of life and relationships. How strong and important women are. She really poured all of her feelings into this album, that’s why it’s so real and why it topped the Billboard 200. She became the first female Hip Hop artist to win five Grammys in one night! This woman is legendary.

These ladies from Queens, New York were one of the first all-female Hip Hop groups. Salt N Pepa came into the game when Hip Hop wasn’t taken seriously and they were women – so the odds were against them. However, they changed how women were looked at in Hip Hop, they were fearless, they knew how to be sexy without trying too hard and they weren’t afraid to say how they felt when it came to men and sex.

‘Push It’ was released in 1987 and became an instant hit reaching #19 on the Billboard 40 and #2 in the UK charts. With Salt n Pepa’s catchy lyrics and production by Hurby Lovebug, ‘Push It’ became an anthem for the ladies!

Growing up I was a huge fan of Death row records, the love for I had for that label became even bigger once I discovered this lady from Virginia! Her flow was untouchable, her lyrics were so hardcore that she could go against the guys and win while rocking rough & stuff with her Afro Puffs!

Afro Puffs was released in 1994 on the Above the Rim soundtrack. With that G-funk production from Dr Dre it was a certified hit.

Hip Hop! What is Hip Hop to me some may ask? Hip Hop is the butterflies you get in your belly when you hear 2pac rap so passionately about LA or the tears you cry when you hear the Lost Boyz tell a story about a wom…