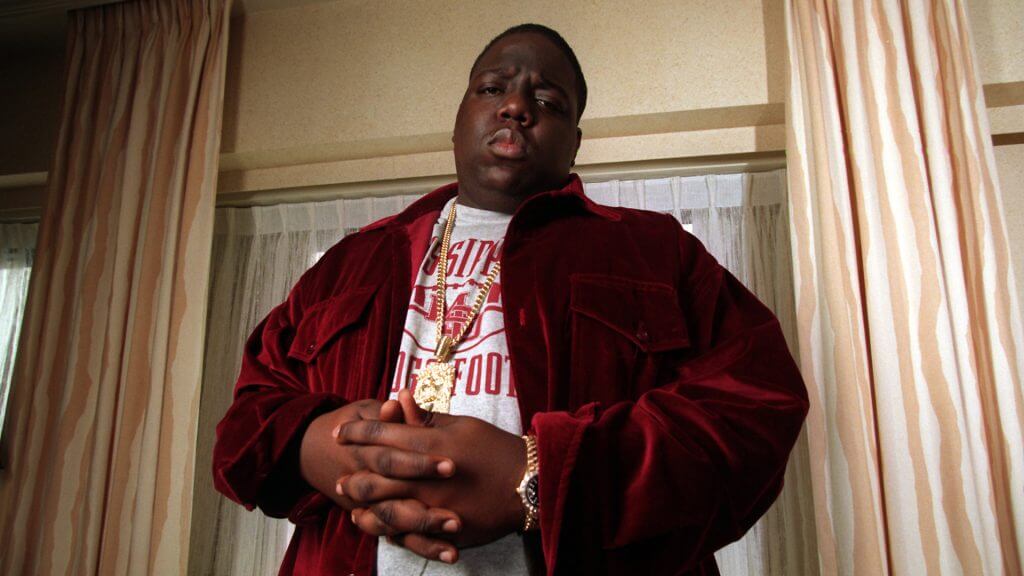 The Notorious B.I.G. a.k.a. Biggie Smalls is one of the most revered artists in the Hip Hop game ever, an extraordinary fact since his career only lasted for a few years, with no more than two albums being released during that time – Ready To Die in 1994 and Life After Death in 1997 (shortly after the shooting that took his life at 25). Of course part of his legend is his early death and the way in which he died, linking him forever to that other icon of the mid-90s who met a similar end not long before: 2Pac. Like with 2Pac, one can only wonder what Biggie would have accomplished further if he had lived longer than he did.

The Notorious B.I.G. was always dark and brooding and his subject matter and choice of words may be to ‘heavy’ for some people, but there is no denying the power and emotion Biggie was able to convey through his lyrics. He was an exceptional writer and his technical skills as an emcee were off the hook as well. His lyrical abilities and powerful charisma ensure his status as one of the GOAT’s, a status unlikely to ever change.

For this list we composed our top 15 Notorious B.I.G. songs- if your personal favorites are missing, let us know in the comments!

“As I leave my competition, respirator style / Climb the ladder to success escalator style / Hold y’all breath, I told y’all — death / Controls y’all, Big don’t fold y’all / I spit phrases that’ll thrill you / You’re nobody til somebody kills you…”

The final song on Biggie’s second and final album, released only weeks after his death. It’s almost as dark of a closing note as “Suicidal Thoughts”, the final track on Ready To Die. The song is made all the more eery because of his murder so short before Life After Death was released.

“Who shot ya? Separate the weak from the obsolete / Hard to creep them Brooklyn streets / It’s on, n***a, f**k all that bickering beef / I can hear sweat trickling down your cheek…”

Seen as one of the reasons for the escalating beef between Biggie and 2Pac, as 2Pac felt the lyrics were about him and referencing the shooting he was a victim of earlier in the year. It inspired 2Pac to write the no holds barred dis-track Hit Em Up, which only served to inflame matters further. Sources around Biggie later claimed that the song was written before the 2Pac shooting.

Whatever the case, the classic instrumental makes the song sounds great (despite Puffy’s vocal input and the possible questionable intent of the lyrics….).

“Live from Bedford-Stuyvesant, the livest one / Representing BK to the fullest / Gats I pull it / Bastards duckin’ when Big be bucking…”

Produced by DJ Premier, so you know the instrumental is dope. One of the many stand-out tracks from Biggie’s super classic debut Ready To Die. Biggie Smalls Is The Illest.

A tale of revenge ending in tragedy, this is a just one more example of Biggie’s exceptional storytelling abilities. This haunting track perfectly sets the tone for the rest of the Life After Death album.

“F**k the world, don’t ask me for shit / Everything you get you gotta work hard for it…”

Even though apparently not every member of the Wu-Tang Clan was a friend to Biggie, it did not stop Method Man from making one of the first Wu-Tang cameos, and what a cameo it is. The Easy Mo Bee produced beat is one of the hottest on the album and the hook is infectious. Great collabo.

“I’ve been in this game for years, it made me a animal / There’s rules to this sh*t, I wrote me a manual / A step-by-step booklet for you to get / Your game on track, not your wig pushed back…”

Basically nothing more than an outline how to be a successful drug dealer – what makes this song the classic that it is, is the sick instrumental and Biggie’s clever lyrics. Also, gotta love that Chuck D sample hyping things up.

“When I die, f**k it, I wanna go to hell / Cause I’m a piece of sh*t, it ain’t hard to f**king tell / It don’t make sense, going to heaven with the goodie-goodies / Dressed in white, I like black Timbs and black hoodies”

The final track of Ready To Die, it ends the album on a dark note with Biggie shooting himself in the head. The dark side of Biggie in full swing.

Over a slow but infectious beat, Biggie tells us what ‘beef’ REALLY means.

“I don’t wanna live no more / Sometimes I hear death knocking at my front door / I’m living every day like a hustle / Another drug to juggle, another day, another struggle…”

The upbeat sounding chorus belies the message it contains. It is another hustler’s tale, which Biggie does so much better than 99% of the rappers who also rap about that chewed out subject matter. Biggie’s lyrical skill is second to none, and this is just one of his songs that exemplifies that claim.

“To all the ladies in the place with style and grace…”

One of the most macked-out songs ever and one of Biggie’s biggest hits. Super classic club banger.

“This goes out for those that choose to use / Disrespectful views on the King of N-Y / F**k that, why try, throw bleach in your eye / Now ya brailling it, snatch that light sh*t, I’m scaling it…”

Another example of a successful collaboration between Biggie and DJ Premier. A beat by Preemo is always a guarantee for some head nodding Hip Hop, and Big is as lyrically tight as ever. That long intro skit could have been shorter, otherwise, this is another perfect Notorious B.I.G. cut.

“I was a terror since the public school era / Bathroom passes, cutting classes, squeezing asses / Smoking blunts was a daily routine / Since 13, a chubby n***a on the scene…”

Biggie Small’s debut single, from the “Who’s The Man” movie soundtrack. A dope party track, which brilliantly samples Doug E Fresh’s classic “The Show”. This song was a mega talent’s introduction to the world.

One of the most underrated Biggie songs; at least it is one of our personal favorites. This is a typical excellent lyrical narrative by Biggie, over a delicious instrumental crafted by Darnell Scott.

A sequel of sorts to “Juicy” this is another one of the few tracks in Biggie’s repertoire that is fundamentally positive and optimistic. The hook could have been less corny, but Biggie’s lyrics are what make this song great. The video features a kid version of Biggie, as well as a kid version of the annoyingly inevitable Puff Daddy, who – no matter how you look at it – had a huge influence on Biggie’s career (for better or for worse).

“It was all a dream, I used to read Word Up! magazine / Salt-n-Pepa and Heavy D up in the limousine / Hangin’ pictures on my wall / Every Saturday Rap Attack, Mr. Magic, Marley Marl…”

The first single off his first album and an unbelievable critical and commercial success. This classic Biggie joint tops our list not just because of its universal appeal, but because of its essentially positive vibe and emotion. Just gotta love Juicy.