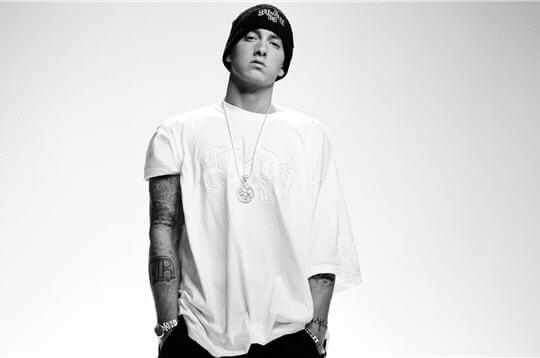 A Hip Hop icon who started off as an underground battle rapper in Detroit. Marshall “Eminem” Mathers has developed a career full of contradictions; wild swings; and some of the most noteworthy Hip Hop of the past decades.

Produced and co-signed by Dr. Dre, Em had an unprecedented run of success from 1999 up through 2003, releasing three well-reviewed, multi-platinum albums, stealing the show on countless collaborations, and even starring in a hit movie. However, it all came crashing down around 2004, when a string of problems ranging from drug dependence to depression to the tragic death of best friend Deshaun “Proof” Holton in 2006 led to a long hiatus from music and a string of what were, by his own admission, sub-par albums.

This led to Em switching his style up from his previously shock-oriented lyrics to more emotional subject matter on 2010’s Recovery. This was a well-received and Grammy-award winning album, and he employed a very similar approach to 2013’s The Marshall Mathers LP 2, the well-received sequel to Em’s magnum opus. (Full bio: Genius)

This is our top 15 Eminem songs. Selecting no more than 15 tracks from Eminem’s impressive catalog is an almost impossible task, but this list attempts anyway. If you miss your own personal favorites, just let us know in the comments!

The lead single from Eminem’s monumental The Marshall Matters LP is much like the previous’ album lead single “My Name Is”: a radio-friendly track that is humorous and vicious at the same time, with some crazy rhyme schemes and exceptional lyricism. An Eminem staple.

Eminem‘s talent and eloquence, combined with his troubled past and personality, led to a whole list of songs that burst with emotion. Tracks like “Kim”, “Cleanin Out My Closet”, “Stan”, “Difficult”, “No Love”, “When I’m Gone”, “Rock Bottom”, and many more all show off Em’s exceptional skill in conveying, raw and pure emotion in his music.

For this list we could have selected any number of Eminem songs, we went with “Mockingbird” however – a heartfelt apology to his daughter for his own and his ex-wife’s failings as parents and an explanation on how he’s working hard at being as good a father as he can be.

“I’m Slim, the Shady is really a fake alias / To save me with in case I get chased by space aliens / A brainiac, with a cranium packed, full of more uranium / Than a maniac Saudi Arabian / A highly combustible head, spasmatic / Strapped to a Craftmatic adjustable bed / Laid up in the hospital in critical condition / I flatlined; jumped up and ran from the mortician / High speed, IV full of Thai weed / Lookin Chinese, with my knees stuck together like Siamese / Twins, joined at the groin like lesbians / Uhh, pins and needles, hypodermic needles and pins / I hope God forgives me for my sins / It probably all depends / On if I keep on killin my girlfriends

From the 1999 Rawkus Soundbombing 2 compilation, this track is almost always forgotten when Eminem’s best tracks are mentioned. That’s wrong, though – “Any Man” has Eminem’s crazy lyrical ability on full display and is the perfect example of the twisted humor that made Em’ earliest work so great.

“I’m Nicer than Pete, but I’m on a Serch to crush a Miilkbone / I’m Everlast-ing, I melt Vanilla Ice like silicone / I’m ill enough to just straight up diss you for no reason / I’m colder than snow season when it’s 20 below freezin’…”

One of the singles from Eminem’s breakthrough record The Slim Shady LP. It first appeared on 1997’s much slept on The Slim Shady EP. Which version is the best one? You decide.

“Serial killer hiding murder material / In a cereal box on top of your stereo / Here we go again, we’re out of our medicine / Out of our minds and we want in yours / Let us in or I’ma kill you…”

In the opening track from Eminem’s magnum opus The Marshall Matters LP, Em showed the world (and especially conservative critics) he could be even crazier and more deranged than he was on his breakthrough The Slim Shady LP. The controversy this track caused no doubt only helped to make The Marshall Matters LP one of the best-selling albums in history.

“What I gotta do to get it through to you? I’m superhuman / Innovative and I’m made of rubber / So that anything you say is ricocheting off of me / And it’ll glue to you and / I’m devastating, more than ever demonstrating how to give a mothaf***in’ audience a feeling like it’s levitating / Never fading, and I know the haters are forever waiting / For the day that they can say I fell off, they’ll be celebrating / ‘Cause I know the way to get ’em motivated / I make elevating music, you make elevator music…”

2013’s The Marshall Matters LP 2 was not quite up to par with its spiritual predecessor The Marshall Matters LP, but after a few less-acclaimed albums it was a definite return to form for Eminem. One of the highlights of the album is this six-minute ode to himself, which shows off Eminem’s technical lyrical abilities to the fullest extent.

“C’mon Hai-Hai, we going to the beach / Grab a couple of toys and let da-da strap you in the car seat / Oh, where’s mama? She’s taking a little nap in the trunk / Oh, that smell? Da-da must’ve runned over a skunk…”

“You see, I’m just Marshall Mathers / I’m just a regular guy / I don’t know why all the fuss about me / Nobody ever gave a f*** before / All they did was doubt me / Now everybody wanna run their mouth / And try to take shots at me…”

The title track off The Marshall Mathers LP is about the changes the runaway success of The Slim Shady LP caused in Eminem’s life. One of the centerpieces of one of the very best albums in Hip Hop, ever.

“I’m cancerous so when I diss you wouldn’t want to answer this / If you responded back with a battle rap you wrote for Canibus / I strangle you to death then I choke you again / And break your f***ing legs / ‘Til your bones poke through your skin / You beef with me, I’mma even the score equally / Take you on Jerry Springer and beat your ass legally…”

One of the many great songs from Eminem’s first mega-hit album, The Slim Shady LP. This one is trademark early Eminem – lyrical and humorous rhyming, a play on critics who blast him for being a bad influence on kids – hyperbolically telling listeners exactly why kids should NOT see him as a role model.

“I never woulda dreamed in a million years I’d see / So many motherf***in’ people, who feel like me / Who share the same views and the same exact beliefs / It’s like a f***ing army marching in back of me / So many lives I touched, so much anger aimed / In no particular direction, just sprays and sprays / And straight through your radio waves, it plays and plays / ’til it stays stuck in your head, for days and days / Who woulda thought, standing in this mirror bleaching my hair / With some peroxide, reaching for a t-shirt to wear / That I would catapult to the forefront of rap like this?”

The opening track to Eminem’s third consecutive classic album The Eminem Show. It addresses hypocritic conservatives who tried to censor Eminem and his influence harder than they ever tried to ban Hip Hop before – mostly because Eminem opened up even bigger (white) audiences to Hip Hop.

“I’m so sick and tired of being admired / That I wish that I would just die or get fired / And dropped from my label, let’s stop with the fables / I’m not gonna be able to top on “My Name Is” / And pigeon-holed into some poppy sensation / To cop me rotation at rock-n-roll stations…”

The second single from Eminem’s Marshall Mathers LP was originally intended to be the first and was written as a reaction to the record company people who put pressure on Eminem to write a radio-friendly first single (which he turned out to do after all with “The Real Slim Shady”). “The Way I Am” is much darker and addresses the pressures and expectations that come with being successful. Great beat, great lyrics, great song.

“Hi, kids! Do you like violence? / Wanna see me stick nine-inch nails through each one of my eyelids? / Wanna copy me and do exactly like I did? / Try ‘cid and get f***ed up worse than my life is? / My brain’s dead weight, I’m trying to get my head straight / But I can’t figure out which Spice Girl I want to impregnate…”

The song that catapulted Eminem to international stardom and the real start of an epic career that would make Em one of the best-selling artists in music ever.

“Have you ever been hated or discriminated against? / I have; I’ve been protested and demonstrated against / Picket signs for my wicked rhymes, look at the times / Sick as the mind of the motherf***in’ kid that’s behind / All this commotion, emotions run deep as oceans / Explodin’, tempers flaring from parents / Just blow ’em off and keep goin’…”

As evidenced by the song “Headlights” from Eminem’s 2013 album The MM LP 2, his feelings towards his mother have changed for the better since this song was released – but because of the raw emotion contained in it “Cleanin’ Out My Closet” will forever remain one of Eminem’s best and most recognizable songs anyway.

“But Stan, why are you so mad? / Try to understand that I do want you as a fan / I just don’t want you to do some crazy sh** / I seen this one shit on the news a couple weeks ago that made me sick / Some dude was drunk and drove his car over a bridge / And had his girlfriend in the trunk / And she was pregnant with his kid / And in the car they found a tape / But they didn’t say who it was to / Come to think about it, his name was… it was you, damn…”

This bone-chilling tale of an obsessed fan is the centerpiece of the all-around masterpiece The Marshall Matters LP, and one of Eminem’s biggest singles in a catalog full of classics. Quintessential Eminem.

“No more games, I’ma change what you call rage / Tear this motherf***in’ roof off like two dogs caged / I was playing in the beginning, the mood all changed / I’ve been chewed up and spit out and booed off stage / But I kept rhyming and stepped right in the next cypher / Best believe somebody’s paying the Pied Piper…”

The theme song from Eminem’s semi-biographical movie 8 Mile not only is Eminem’s best single, but also one of the best (and most successful) in the history of Hip Hop.