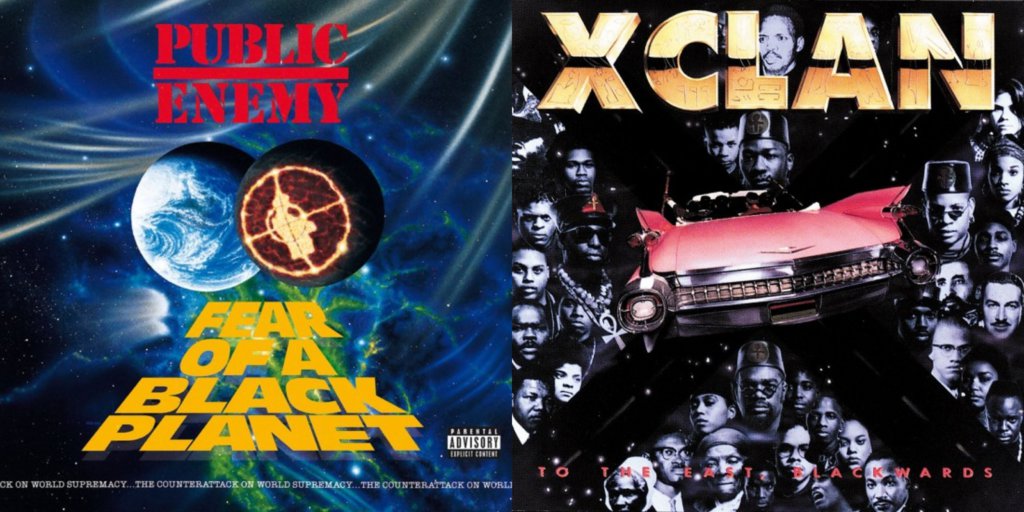 The fun in reflecting with these nostalgic essays is putting yourself back at a crucial moment. For today’s essay, that crucial moment is April 1990 in your local record store. Of all the records, cds, or cassettes on display there, you end up holding one in each hand: Public Enemy’s Fear Of A Black Planet and X Clan’s To The East, Blackwards. Then there is this – you only have enough money for one. Which do you choose?

We are going to breakdown the choice into a few categories and as objectively as possible, assign points between 0 – 2. The categories are:

Ultimately, the album with the highest score is the one you and I probably should have initially purchased.

Public Enemy was at the top of their game. While their first album was okay, their second, It Takes A Nation Of Millions To Hold Us Back, is one of the most important musical contributions of the last century! It was that monumental. 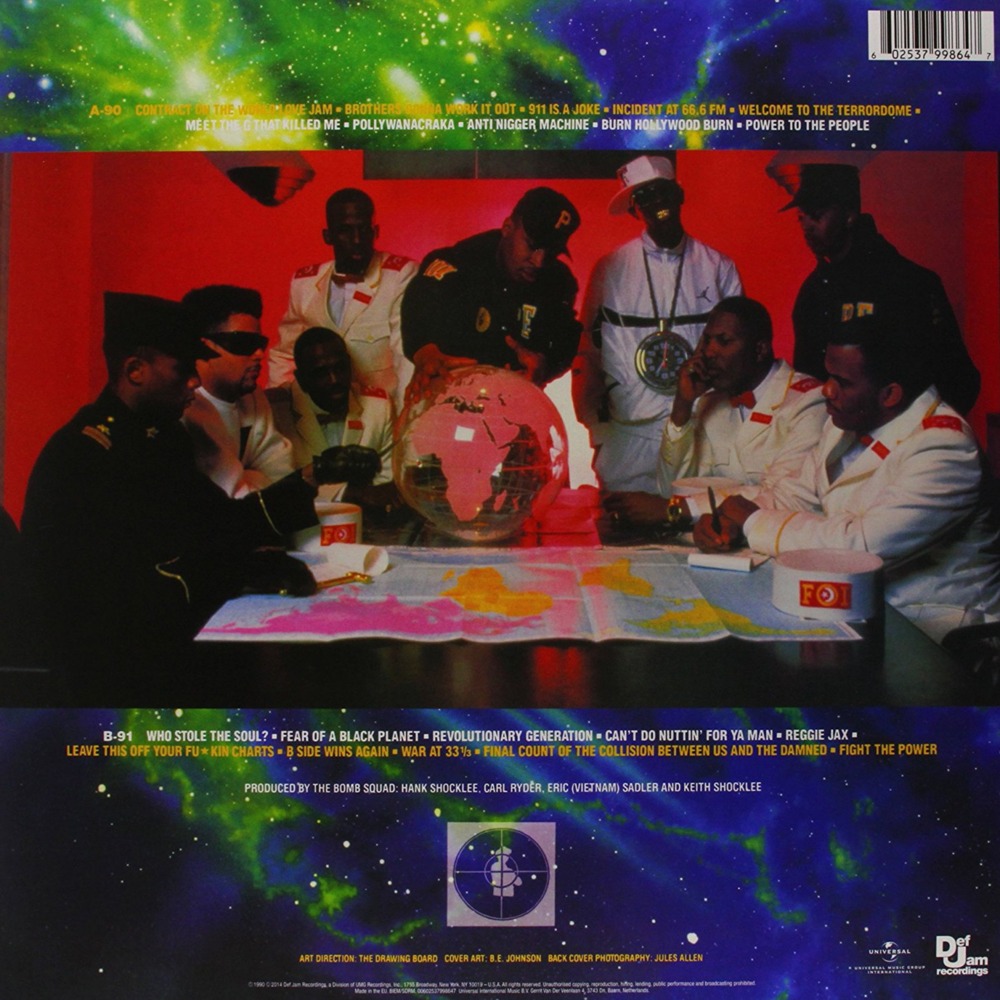 Moreover, “Fight The Power” had been vital to the success of Spike Lee’s classic movie, Do The Right Thing and was included on this album. PE had a fully steamed locomotive of momentum heading into the release of Fear Of A Black Planet.

In the spring of 1990, I was 15 years old and I was as about as committed of a Hip Hop fan as one could be. I frequented the record stores in my Detroit neighborhood – Professional’s and Chauncey’s – and even recorded music videos on VHS so that I could watch them over and over (and at times, horribly replicate the dance steps). 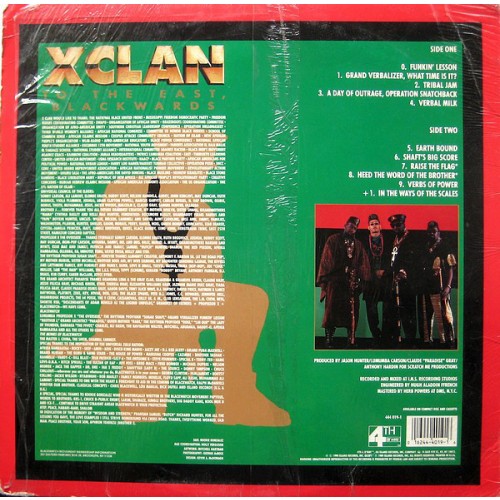 Yet, for all of my Hip Hop enthusiasm, I had never heard of the X Clan prior to the moment when I first picked up their album.

“Welcome To The Terrordome” is my all-time favorite PE song! My man, Jay, let me hold the cassette single before the album dropped and I played it non-stop. I did the intermittent play – pause – write down the lyrics thing because I was so excitedly energized by the experience. When Chuck said “Every brother ain’t a brother cause a black hand squeezed on Malcolm X the man”, I had to get my dad to listen to it so that we could talk about that and some of the other lyrics. When my dad heard the song and christened it with “These young brothers is all right” – man, I was proud and became a PE fan for life.

“Heed The Word Of The Brother”: When fans everywhere hear Professor X proclaim “Exist in a state of Vanglorious, as we are protected by the red, the black, and the green, heed the words of the brother …”, they all shout the next word on cue. Then the Parliament sample beat drops and we are introduced to certainly one of the most slept-on MCs ever – the grand verbalizer, funkin’ lesson, Brother J! Man, let me tell you, J’s consistent, wise, and effortless flow is accentuated by the numerous lyrical gems he dropped. It’s been three decades and I still believe “the ever tangled web we weave, always trying to obtain, no attempt to achieve” is one of the most prescient lines ever.

“Fight The Power“: It is not an exaggeration to say that this song is historic. In addition to making known our feelings about John Wayne and our displeasure that “most of (our) heroes don’t appear on no stamp”, this song is energetic and infectious.

It deserves to be their signature song and an essential part of Hip Hop history.

“Funkin’ Lesson” is the first song on the album and it’s smokin’! It’s like you got these nearly relatively unknowns with a few seconds to make their point and ABRACADABRA they do their thing like it has never been done before.

I was riding with my brother, Damon, when we first heard this song. We rewound the tape after the first verse to hear Brother J again. Brother J “walks in the light of the moon, but (he’s) never been a Batman, African, call it Black man.” Again, his flow amplifies his wordplay.

“Revolutionary Generation” has been an enduringly influential song for me. Prior to hearing it, I do not recall ever hearing an MC take a stand for Black women in the way that PE did with this song. As a writer, my novels focus on healthy portrayals of Black women because I learned from Chuck D – “R E S P E C T, my sisters not my enemy, because we’ll be stronger together …” This is my daughter’s favorite PE song.

“In The Ways Of The Scales” was the first song I played for weeks, each morning as I rose for school. Melodically, it is the perfect cap / end song for this album. Lyrically, when J states “I am an African, I don’t wear Greek, must I be reminded of a legendary thief, who tried to make Greece in comparison to Egypt, but they got gypped cause their minds not equipped” – it was just one of the numerous lessons I learned from him.

Part of what made Public Enemy so iconic was the uniqueness of their sound. Their producers, the Bomb Squad, had these layers of samples that can be discombobulating to virgin ears. Their bombastic sonic confusion allies with adolescent and young adult angst. However, maybe because I’m old, maybe because I’m a parent, I don’t know why, but despite my immense love and respect for Public Enemy, nowadays, I can only listen to a few songs at a time. This album fits perfectly in the time in which it was released and musically (not the lyrics or the messages – but the sound), an attribute that made it so unique also impedes its other timeless qualities.

X Clan sounds like early 90s Hip Hop with its heavy funk samples. Yet, particularly “Raise The Flag”, those samples are inspiring, soothing, nostalgically warming. Usually, if I hear one song, I will opt to hear several others.

Fear Of A Black Planet continues the excellence of It Takes A Nation Of Millions … It is a pace-keeper.

To The East, Blackwards was woke before people used the term to shame others. During a time with Afrocentrism was common in Hip Hop, no one represented it to the level and quality of X Clan. Moreover, perhaps overlooked, the value of Professor X. Sometimes younger generations shun their elders in a zeal to do things their way. Considering the machismo prevalent in Hip Hop, X Clan utilized the voice of an elder as a pillar in their production. Years later, Arrested Development would incorporate an elder on a smaller scale; but X Clan in particular and the Blackwatch movement overall felt like a communal experience. It was a game-changer.

Rewind back to Chauncey’s Record Shop on Evergreen and Six Mile, a 15-year-old Sabin Prentis inspected and read the front and backs of the Public Enemy and X Clan albums. I only had enough money for one. Although eventually, I would have both, I know that today I would make the choice just as I did then – I would purchase the X Clan.

4 responses to “Just One: Public Enemy or X Clan”