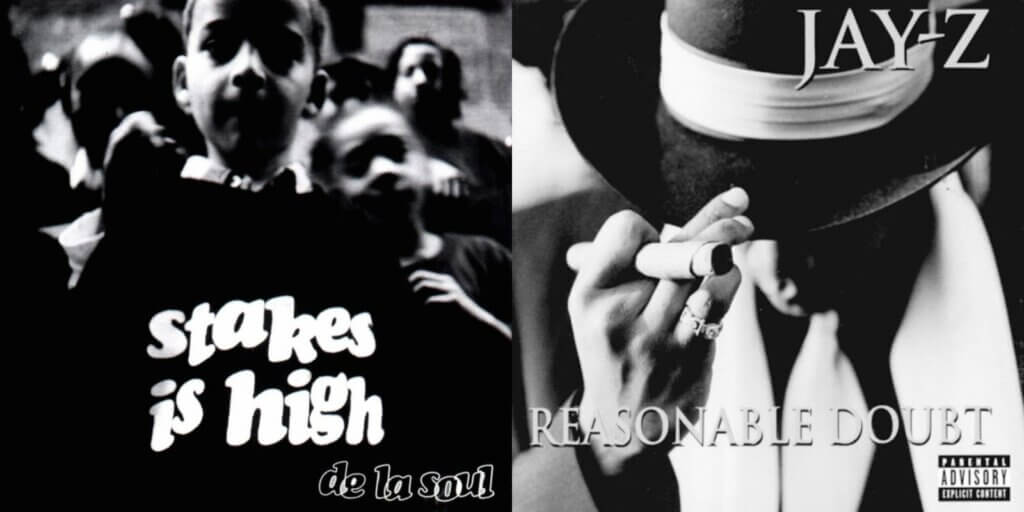 Today’s Just One matchup represents two camps within Hip Hop that were possibly as far apart as the Bernie Sanders and Joe Biden camps in the Democratic Party. Released seven days apart during the summer of 1996, De La Soul’s Stakes Is High and Jay-Z’s Reasonable Doubt are not only contrasting flavors in Hip Hop but both of these albums dropped at a time when the culture was changing. Pac and B.I.G. had been taken from us. The mindless testosterone of gangsta rap was starting to fade and Puff Daddy’s shiny suit reign was still ahead of us.

Personally, I had graduated from college and was facing the damnedest time landing a job. A dilemma that prompted my enrollment in graduate school while also equipping me with the grown-up awareness that things won’t always go as planned. I was in a melancholic place when I heard these albums; yet, I kind of sensed that things were changing for the better in my life and in the culture I love.

I’m hoping by now that we have a cadre of readers who enjoy these trips through nostalgia. If you are new, the premise is this: at a certain time, Hip Hop fans were faced with a purchasing choice while only having enough money for one of the two then-recently released albums, CDs, or cassettes. Understand that we use a 0-2 point scoring system in a couple of categories to determine which would have been the better initial purchase. The categories are:

Got it? Cool. Let’s make it happen.

I’ll be upfront – I was a reluctant De La fan. Always respected them; yet, didn’t “get” them at first. However, my respect is rooted in their courage to switch things up and evolve. Their evolution helps me “hear” their lyrics better. I mean, 3 Feet High and Rising was a huge break from the norm. They could have stayed comfortable in that lane and became gimmicky (an example of this is the Insane Clown Posse), but they didn’t. They evolved. These dudes are the truth.

Until other rappers brought it up as a means of dissing Jay-Z, I had sort of forgotten his “Hawaiian Sophie” cameo. Although I was attending school on the East Coast and had access to what was up and coming in Hip Hop, Jay-Z wasn’t on my radar. It wasn’t until I was hanging with my man, Jay, in Atlanta when “Ain’t No Ni***” started getting heavy airplay (along with “My Boo” by the Ghost Town DJs and “Whatz Up Whatz Up” by Playa Poncho – I said I was in Atlanta, man). But I don’t think any of us knew that he would become the cultural colossus he is today.

“Stakes Is High”: Hold on, there is no way we can reflect on this song without saying with “Vibes … vibrations.” Alright, now we can proceed. Stakes Is High was the first De La CD I purchased and since I was new to the CD track shuffle feature, the title track is the first song I heard. And boy! It was an indictment on the times!

I say G’s are making figures at a high regard

And ni***s dying for it nowadays ain’t odd

Investing in fantasies and not God

People try to snatch the credit, but can’t claim the card

Showing out in videos, saying they co-starred

See, s*** like that will make your mama cry

“Ain’t No Ni***”: Wait a minute – to go from the “Stakes Is High” to “Ain’t No Ni***” captures this whole competition in a nutshell. Back to the song, because they use the same sample as EPMD’s “It’s My Thing”, I had to give this track a listen. Plus, Foxy Brown? Man, let me tell you, I just have thing for a feisty spirited lady and Foxy is definitely that.

Yet, this was the beginning of my appreciation for Jay’s witty off-liners like:

Subject matter aside, if you know what you’re listening to, then you can acknowledge the craft.

“The Bizness“: despite my lower scoring of Common’s first album in a previous essay, Rashid is my man. He is solid, consistent, and a great compliment to Pos and Dove / Dave. He captures the essence of the album when he spit:

Moreover, this is really when De La got me to rewinding and checking again for what they said. Like when the song opened with these bars:

I speak divine of God theories, no need to be high

Always exhale the facts ’cause I don’t inhale lie

Play the greater man’s game to bounce off my losses

The engine to my comprehension is just too complex

“Brooklyn’s Finest”: In addition to coming of age with Hip Hop, I also came of age with comic books. Back in the day, there used to be a series called “Marvel Team-Up” where they would do one story with two stars who hadn’t shared a story together. When I first heard “Brooklyn’s Finest”, all I could hear was a Hip Hop Team-Up. To me and other fans who were just starting to know Jay-Z, this pound-for-pound, back-and-forth with B.I.G. really showed his promise.

While y’all pump Willie, I run up and stunt silly

Scared, so you sent your little mans to come kill me

Squeezed off on him, left them paramedics breathin’ soft on him

Peruvians tried to do me in, I ain’t paid them yet

Rolex and bracelets is frostbit; rings too

Ni***s ’round the way call me Igloo, stick WHO?

“Brooklyn’s Finest” is a classic.

“Itzsoweezee (HOT)” is aptly titled because it is HOT! Moreover, it still thumps. If it was an instrumental, it would outstanding; yet, the lyrics take it up another notch. On one hand they are emphasizing their view on the way the culture was going:

Why you acting all spicy and sheisty

The only Italians you knew was icees, ni***s price me

And then they re-emphasize it while also displaying their skills:

Now here’s the lead, y’all ni***a pray to hot rods and not God

(When’s the last time you had Happy Days?)

Blazin‘ up your herb to escape the maze, but the problem stays

Think big get it big is my motto

You can go and play your lotto

I’ll be singin‘ like baby won’t you be mine

You’ll be pressin‘ rewind, you can never see mine

Keep your eyes focused, you can’t touch this or quote this

“Can I Live”: because “Itzsoweezee” was my favorite beat, I’ll go with my favorite beat on Reasonable Doubt – the Isaac Hayes sample track, “Can I Live”. Since I was vibin’ to the beat so tough, the slow down helped me realize the Jay-Z was more than a show-off, materialistic, wanna-be-don, rapper. It’s like all that was smoke & mirrors for the real genius behind the facade. This would become more and more apparent over time.

My crew and me commit atrocities like we got immunity

You guessed it, manifest it

In tangible goods, platinum Rolex’d it

We don’t lease, we buy the whole car, as you should

My confederation, dead a nation

Explode on detonation, overload the mind of a said patient

When it boils to steam, it comes to it

We all fiends, gotta do it: even righteous minds go through this

True this, the streets school us to spend our money foolish

Bond with jewelers and watch for intruders

I stepped it up another level, meditated like a Buddhist 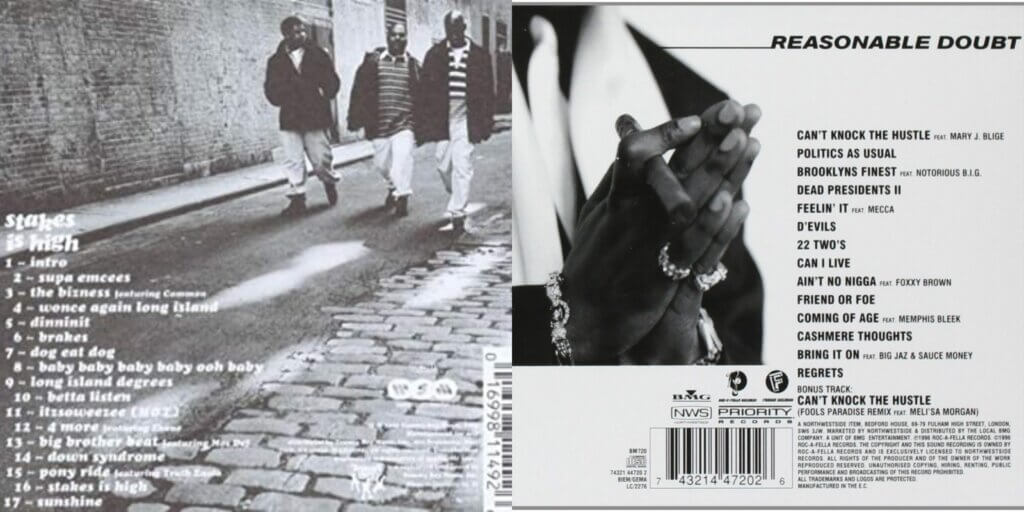 Despite your preference, both of these albums aged about the same. Lyrically and sonically, they both continue to resonate with their fans. For me, particularly back in ’96, I was gaining an awareness of how wide Hip Hop’s influence was becoming. As a soon-to-be teacher, I was acutely sensitive about our responsibility in the messages we share. While writing this, I kept getting stuck between De La’s message and Jay-Z’s craft.

To help me sift through the stalemate, I got on the horn with my guys, John and Mike. As we chopped it up, they brought up the notion of a greatest hits album. The idea being one greatest hits album covers the artist’s whole catalog. I’m going to expand on their idea – if we have a 20 song greatest hits CD, how many tracks on the De La one would come from Stakes is High? How many on the Jay-Z one would come from Reasonable Doubt? That broke the stalemate for me. With this assessment of how the albums aged, I shifted to a perspective of almost an intra-artist comparison of their other work. That shift in perspective led me to:

After Stakes is High, I worked my way back and listened to previous De La albums and noticed that they grew with each release. They are artists, not caricatures. Due to their steady and impressive evolution, Stakes is High is a pace-keeper.

I really can’t pinpoint when the mafioso thing took off in Hip Hop. I’m a Detroit native, whose favorite local rappers, AWOL, wore “full-length minks and beaver hats.” So stylistically, the whole laid back, grown-a** man, who has his finances and his relationships with ladies under control – that persona was not new to me. However, on a national scale that spanned from chucks & khakis to Timberlands & camouflage jackets, Reasonable Doubt was a game-changer. Although Nas was already a known and respected MC, Jay-Z took the Brooklyn MC baton from B.I.G. and ran with toward record-breaking success. In the void of B.I.G.’s absence, Jay-Z was staking a serious claim as the King of New York.

This exercise in nostalgia prompts a bit of reflection. Back in ’96, I bought De La first. I saw it as a “let-me-see-if-all-the-hype-is-for-real” purchase. I didn’t buy Reasonable Doubt until years later because I erroneously assumed Jay-Z was one-dimensional. After calculating the categories, while I still should have and would have purchased both, Reasonable Doubt should have been the first purchase.

Just One: Redman or Common Sense

One response to “Just One: De La Soul or Jay-Z”