Immortal Technique “Dance With The Devil” (2001)

“Dance With the Devil” is a song by Immortal Technique from the album Revolutionary Vol. 1 (2001).

This is an unofficial music video for the song,  directed by Daniel Zhao.

The song is a narrative in which Immortal Technique describes the story of a young man named William “Billy” Jacobs who attempts to join a gang, and in order to prove how “real” he is, he steals, gets into fights, and drops out of school to sell marijuana. After switching from marijuana to Crack Cocaine and making a sizeable amount of money, Billy decides to move on to selling Powder Cocaine, attempts to join one of the more powerful and violent gangs, and as part of an initiation to finally prove himself, rapes a woman. An intoxicated Jacobs completes this task after covering the woman’s face with her own shirt and is unaware of the identity of the woman until he takes the cover from her face in order to kill her and complete his initiation. He is repulsed to find that the woman in question is actually his mother, which leads him to commit suicide. The gang then proceeds to kill his mother. The story ends with The Narrator revealing that he was one of the gang members who participated in the act and is now convinced that he is being constantly perused by The Devil for it.

The song has acquired something of a cult hit status in recent years. Immortal Technique said about this:

“I made myself more of a part of it when I wrote the song, and it eventually became an urban legend, and what’s sick is that people thought it was about rape [when] it was really about how we are killing ourselves and destroying the most valuable resource that the Latino/Black community has: our women.” (Wikipedia) 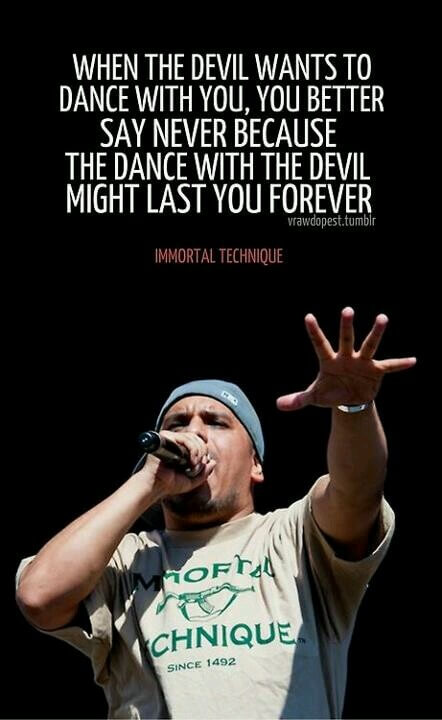