Picking up where Enter the Wu-Tang left off, Only Built for Cuban Linx… elaborates on the esoteric universe of the Staten Island collective, particularly their penchant for collaborative narrative. Raekwon and co-host Ghostface Killah are so comprehensive in their phrasing and word choices that they’ve expand on the group’s mythology, injecting their own inventive street slang, colloquialisms and a cineaste’s passion for dialogue and characterization. The characters prowling through their pulp narrative may take Tony Montana as spiritual advisor, but they aren’t afraid to show pathos or express regret, which brings a uniquely human touch to an often apathetic genre.

The highly-evolved coke rap interplay between Ghost and Rae is itemized to the point of compulsion. The food on the plate, gun in the holster and scene of the crime are all cataloged like an Elmore Leonard novel, rife with atmosphere and pedal-to-the-medal fast. Ghostface is excitable, capable of expressing dominance and humanity at brisk pace and equal measure. It’s chilling when he paints a gunshot victim’s terror as “open flesh, burgundy blood colored my Guess.” In contrast, Raekwon struts instead of runs, adding flourishes in place of clichés (“Mega ice on, chips ahoy”) and an urgency to the close of each bar. The bleakness in Rae’s tone perfectly mirrors the ominous nature of the production. 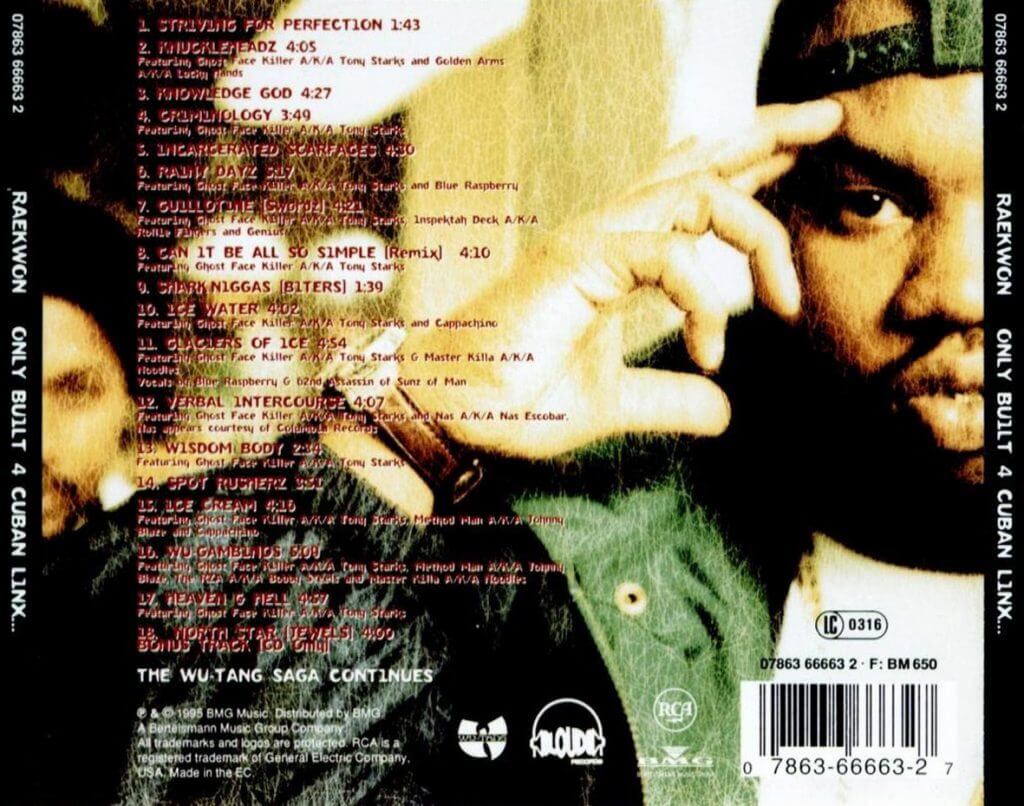 Curating the entire album, RZA has coated each track in a cavernous, low-tech wall of sound, propelled by heavy bass stomp and sunk deep beneath queasy, seasick tonal shifts. The film influence goes far beyond The Killer and Scarface samples, lending a foreboding eeriness that will strike a cord with Ennio Morricone buffs, particularly those attracted to warped strings, nuanced piano roll and screeching soul vocal. Blaxploitation horn and sax even find their way into “Criminology,” a track that echoes like it was recorded in a tunnel and slowly hypnotizes with a looped tubular bell. Avoiding a clean, manipulated studio sound has given the track a noticeable hiss, which contributes a rich warmth and uncommon depth. It stands in opposition to the mainstream sound of the time period, truthfully aligning itself to the content of the lyrics.

It’s rare to find a solo effort that’s both interested in furthering the concept of the group while flaunting the talents of the individual. Cuban Linx continues the Wu-Tang story, but from the perspective of a street-wise storyteller, consumed with filing through the elements of the drug underworld. It’s this attention to detail that separated Raekwon from the rest of the pack in 1995.

Raekwon – Only Built 4 Cuban Linx… was ranked #34 on Matt Deapo‘s Hip Hop Top 50, a ranking of 50 of the best Hip Hop albums recorded between 1978 and 2006, based on this consideration and these rules.