Kanye West‘s strong suit isn’t his ego or his cultural cache, but his insecurity. The College Dropout compellingly finds him struggling for an identity in post-millennium Hip Hop. He’s both “Benz and backpack,” clinging on to pleasures of the flesh while striving to bring God back to popular music and accurately portray city life. His product is perpetually subjective, as is anything released by a man willing to rap through a wired jaw. What makes him so fascinating is his eagerness to wear his heart on his sleeve, while still clamoring for the amenities furnished by a successful music career.

Though his failed collegiate aspirations may seem capricious, his mission to portray commonalities is steadfast. He’s certainly adept at conveying ideas, spiked with only the slightest hint of ego (he’s saving most of that for future LPs). These concepts are often dispatched through joke or pun and even his works of the least gravity possess effortless rhyme scheme (silhouette/cigarette, mocha latte/Pilates). I dare the listener not to laugh when West spouts, “Got a light-skinned friend, look like Michael Jackson. Got a dark skinned friend, look like Michael Jackson” on “Slow Jamz.”

His propensity for goofing off is only the half. He’s capable of owning up to his contradictions, something that alludes MCs with experience beyond his years. An “everyman” quality makes it easy to look past his fledgling flow, which seems to be Talib Kweli’s with half the adroitness, allowing one to revel in his command of language and songwriting capabilities. His finest works even take on the best aspects of spoken word and carry a satiric bent, particularly on “The New Workout Plan,” which plays like an infomercial for the unfettered male libido. 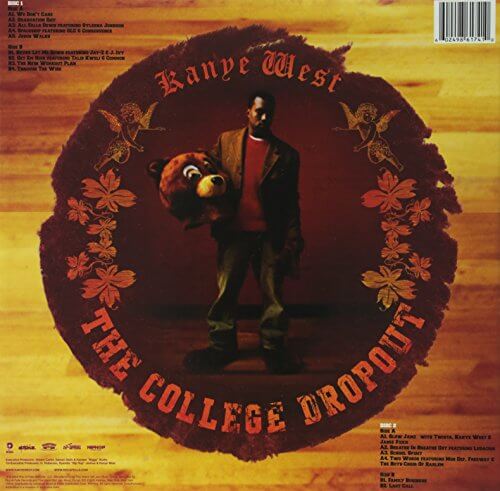 Not only a showcase for his verbal brilliance, The College Dropout is a canvas for West’s production, which leans towards a highly orchestrated, neo-soul collage. This energetic amalgam relies on the best snippets of 70’s staples and amplifies/repeats them ad nauseam. Despite following a formula, it’s compellingly diverse, adding acoustic guitar, paramount female vocals and slow bass groove to the already infectious rhythm. The sound can veer from emotional climax to “beers and blunts” party track (see “Get Em High”), showing off West’s grasp of a multitude of genres. Yet, his most cogent moments stem from a strong gospel background, depicted in the group dynamic of the album’s choruses.

“We Don’t Care” bases its strength on community participation, inspired by Kanye himself and followed by a group of lively school children and female crooners. Heavy doses of funk organ lay a base for West’s argument, which draws parallels between poverty, education and the job market. His role as spokesperson is never better than at this moment, where he confirms the inevitability of crime in a society of dire circumstances.

His arguments for equality make it impossible not to root for him. He’s constructed a debut that is both intimate and innovative, coasting off of personal experience and a wealth of impassioned melodies. Though his public image would certainly change after this release, 2004 saw him as everything to everyone: thoughtful narrator, braggadocious baller, artful producer and astute civil critic.

Kanye West – The College Dropout was ranked #35 on Matt Deapo‘s Hip Hop Top 50, a ranking of 50 of the best Hip Hop albums recorded between 1978 and 2006, based on this consideration and these rules.