To call Criminal Minded trendsetting would be a grave understatement. Not only did it bring street crime into the conversation, it merged the bass-heavy tones of Jamaican dub with New York City Hip Hop, made disrespecting your contemporaries a sport and provided a frame of reference for the socially conscious rap to come.

Though the debate over Hip Hop’s birthplace is far from an underlying theme, Bronx’s own Boogie Down Productions endlessly lobby for the title of rap’s first and finest. Focusing his energy on besmirching the clumsy writing and stale production of the en vogue Queens figureheads, sole vocalist KRS-One brilliantly illuminates the power of creative thinking and socio-political brainstorming. Often affecting a playful growl or menacing patois, KRS stresses the importance of acquiring knowledge at his most serious and goofs on crackheads and DJ Scott La Rock’s promiscuity at his most whimsical. His style focuses on a potent conveyance of rhyming words. That’s not to say that his songwriting is basic, he’s just perfected simplicity, which is much harder than hiding flaws in forced complexity.

The production follows suit, concentrating on high-pitched funk breaks, fragmented bits of James Brown’s vocal wail and Scott La Rock’s accelerated turntable work. Though uncomplicated by modern standards, it’s suitable for the commanding thrust of KRS’ voice, adding an authoritative drum blast on diss tracks and a bassy synthesizer to their reggae-leaning crime anecdotes. It’s a sound that packs confidence far beyond their years, reflected in the effortless genre-hopping and tonal shifts. Additional studio work provided by Ced Gee (of Ultramagnetic MCs) may be responsible for some of the manic energy, but the duo’s ability to play off each other is the record’s strongest virtue. 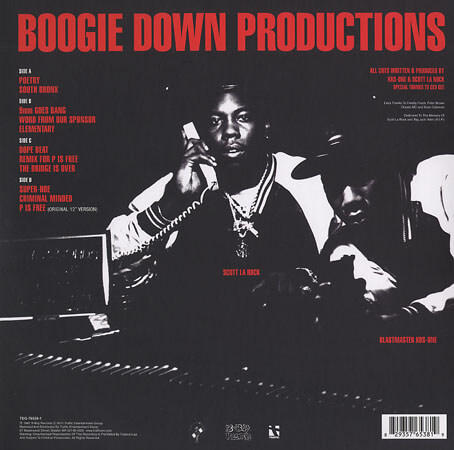 This partnership is well advertised on the title track, which opens with a jovial “Hey Jude” interpolation, followed in striking contrast by one of the most ferocious displays of linguistic power ever put on record. “Criminal Minded, you’ve been blinded, lookin’ for a style like mine, you can’t find it” is the crushing opening statement; so simple in its delivery, but so profoundly expressed. KRS’ rhythmic verbal composition is backed by a powerful synth thud, high-stepping drum beat, disembodied moans and spastically disassembled horn samples.

What could have been a chaotic mash of opposing sonic elements and themes is reigned in by the scholarly intonation of KRS-One, a dauntless MC capable of verbal malevolence to his subordinates without sacrificing positivity or the desire to elucidate the power of poetry. His pairing with Scott La Rock is at once effortless and boundlessly exciting, marred only by the fact that Scott’s untimely death would make it their only collaboration.

Boogie Down Productions – Criminal Minded was ranked #33 on Matt Deapo‘s Hip Hop Top 50, a ranking of 50 of the best Hip Hop albums recorded between 1978 and 2006, based on this consideration and these rules.