Battle Of The Posse Cuts: We Made It vs. Life’s A Bit** 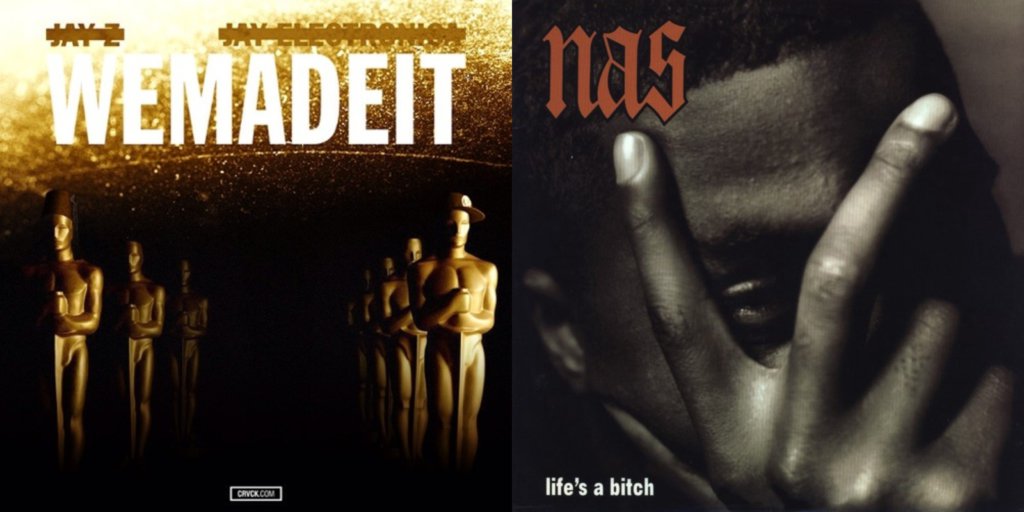 Some of y’all might find it a bit sacrilegious to pit any song against Life’s A Bit**, which I totally understand. It is without a doubt one of the banging-est Hip Hop tracks ever and a standout track on a classic album. However, we gain nothing by playing it safe, so let’s go out on a limb and see how it matches up with Jay-Z and Jay Electronica.

Despite the twenty-year gap between these recordings, they share some similarities. They open with legendary MCs who never achieved the commercial success that their lyricism deserved and end with MCs who are perennial Hip Hop giants lyrically and commercially.

Why would I choose to pit these songs against each other? Easy, my daughter asked which did think was better and I was dumbfounded. To grant some perspective, Life’s A Bit** was the first song I played for my birthday every year from 1994, the year I turned 20, until 2017, when my dad passed and I accepted the transition from being a young man into becoming a grown a** man. Nevertheless, AZ’s line about “Keepin’ this Schweppervescent street ghetto essence inside us” will always resonate with me.

Then there is We Made It, a freestyle originally designed to take shots at Drake. At my stage of Hip Hop fandom, Drake is of little consequence; but Jay Electronica and Jay-Z on the same track?! That’s some stop-what-you’re-doing level stuff there.

So let’s get into it. As you know, these battles are subjective and follow three rules. The competing songs:

Even though today’s battle is more of a tag team than a relay, we will retain our usual relay scoring method with each MC being scored this way:

Some would consider Jay Electronica to be Hip Hop’s Sasquatch or Loch Ness Monster because there have been reported sightings of an album, but regular fans have never seen it at Best Buy, iTunes, or Tidal (notice how the music purchasing mediums have changed). I got a friend who swears Jay has so many SoundCloud or other online tracks, that he has already put out the album in his own unique way. Mmmmaaannnn, I don’t know about that, but I do know that Jay’s lyrics are multilayered and thought-provoking.

The papers, the labels, they labeled me

But they can’t relate to our struggle, my n***a

We came up from slavery

As scholars tend to say, “it’s just so much to unpack.” Yet, as potent of an opening as that is, AZ set the bar in a whole ‘nuther galaxy when he opened with:

Visualizin’ the realism of life in actuality

F**k who’s the baddest, a person’s status depends on salary

And my mentality is money-orientated

Whoa. Countless Hip Hop Heads have gotten tongue tied trying to repeat those bars. It’s like we’re awed and inspired. Those bars and Inspectah Deck’s opening in Triumph are some of the best opening lines EVER. It’s also like Jay came out bobbing and weaving before he threw the first jab. AZ came with an opening straight jab to the mouth (or to the ears – but you know what I mean). Yet, in a good way, we have to account for the compounding nostalgia that comes with listening to AZ. I’m going to try to work around that and go almost bar-for-bar in a vacuum. But out the gate, AZ was blazing.

As we return to Jay Electronica’s verse, the beat drops right when he says:

The greatest story ever told, n****s in the field
From Solomon to Sambo to Django, it’s fact

The son of WD, who hung around in the D

Who ran around in the three

The trap gods raised me

Historical, mystical, theological – those are of terms not often used describing bars, but they fit here and prove to us just how Jay earned his mythological status. (Plus a shout out for the Detroit reference!) But AZ can go there too:

‘Cause yeah, we were beginners in the hood as Five Percenters

But somethin’ must’ve got in us, ‘cause all of us turned to sinners

Others, such as myself, are tryin’ to carry on tradition

Keepin’ this Schweppervescent street ghetto essence inside us

‘Cause it provides us with the proper insight to guide us

Even though we know, somehow we all gotta go

But as long as we leavin’ thievin’

We’ll be leavin’ with some kind of dough

So, until that day we expire and turn to vapors

Me and my capers will be somewhere stackin’ plenty papers

While we get the impression that Jay maybe a strict religious practitioner, AZ seems to have lost the faith and adopted the hustler’s religion. Moreover, the elephant in the room is that he stole the spotlight from Nas with those bars – that is a big f****ing deal! But dawg … Jay Electronica, man. So it’s like this, AZ came out with a sustained blazing fire, but Jay built up from a simmer to a blaze to a bonfire. See what I mean:

Face all on the Sphinx

Story all in the wall of the pyramids

You can blow the nose off, that won’t change it

Obamacare won’t heal all that anguish

We came a long way from the bottom of the boat

All praise to the Mahdi, we found our language

God tribe of Shabazz stylin’ on the record

Lost sons of Muhammad, we wildin’ in the wreckage

Wait a minute. Dude spits in Arabic within his flow and does not lose momentum. I mean, I’m old school and remember when King Sun did a little Spanish and French on a track, but Arabic? And still flow? Dawg. For real? The rest of the verse slows a bit, but this is a banging-a** verse!

This ain’t Takeover vs. Stillmatic, but it is a display of these iconic MCs doing their thing. Their respective catalogs are immense – loaded with classics, bangers, and a handful of forgettable tracks. We also have to consider this is early Nasty Nas (*I didn’t hear Live at the BBQ until after I heard Illmatic) vs. established, philanthropist, married Jay-Z. That gap in age accounts for perspective but also leaves us with their flow and wordplay. Let’s start with Jay:

Hop off the slave ship

Popped off my chain and took it to Jacob, I got it gold plated

I own my own masters

You know I ain’t missin’ no royalty statements

I can’t be rated (God, God), damn Hov stunt on them haters

If you are foolish enough to think Jay is one-dimensional, well, in the final words of Stringer Bell –  “Don’t seem like … I can say nothing that can change y’all mind … well, let’s get on with it moth** …”

I come to court with black boxers on

Y’all hella jealous of my melatonin

I could black out at any given moment

I’m god, G is the seventh letter made

So when my arms and feet shackled I still get paid

I’m ready to chase the Yakub back into caves

These are the last days, but do I seem fazed?

Man, you didn’t know Jay had it in him, hunh? He went multi-layered and religiously symbolic with Jay Electronica. Whoa.

But Nas? on a classic – can’t overlook that son. Here’s the whole verse:

The essence of adolescence leaves my body, now I’m fresh and

My physical frame is celebrated ‘cause I made it

One quarter through life, some godly-like thing created

Got rhymes 365 days annual, plus some

Load up the mic and bust one, cuss while I pus from

My skull, ‘cause it’s pain in my brain vein, money maintain

Don’t go against the grain, simple and plain

Robbin’ foreigners, take they wallets, they jewels and rip they green cards

Dipped to the projects, flashin’ my quick cash

And got my first piece of a**, smokin’ blunts with hash

Now it’s all about cash in abundance

I switched my motto; instead of sayin’, “F**k tomorrow!”

That buck that bought a bottle could’ve struck the lotto

Once I stood on the block, loose cracks produce stacks

Pack a 4-matic to crack your whole cabbage

Nas’ storytelling is unique. It’s like you can see yourself there. That is a skill significantly more complex than making words rhyme. Moreover, I was still in my hard-reluctance-to-East-Coast-Rap stage when I first heard this and became a believer with the first listen. It was Nas that made me believe the pendulum of popularity was swinging back East after years on the West.

From this exercise I’ve learned, it’s best to stick with tracks within the same time frame. One reason is that nostalgia gets in the way of objectivity as it is clouding my ears regarding coming of age with Nas’ verse.

This match-up is like Shaquille O’Neal versus Kareem Abdul-Jabbar. We Made It is Shaq and Life’s A Bit** is Kareem. If Shaq bodying Kareem in the paint, there is no- stopping Shaq. Then again, Shaq couldn’t do anything against the skyhook. There is a reason Kareem is the NBA All-Time leading scorer; just like Life’s A Bit** is an all-time Hip Hop classic that not even a great song from two legends can unseat.

One response to “Battle Of The Posse Cuts: We Made It vs. Life’s A Bit**”