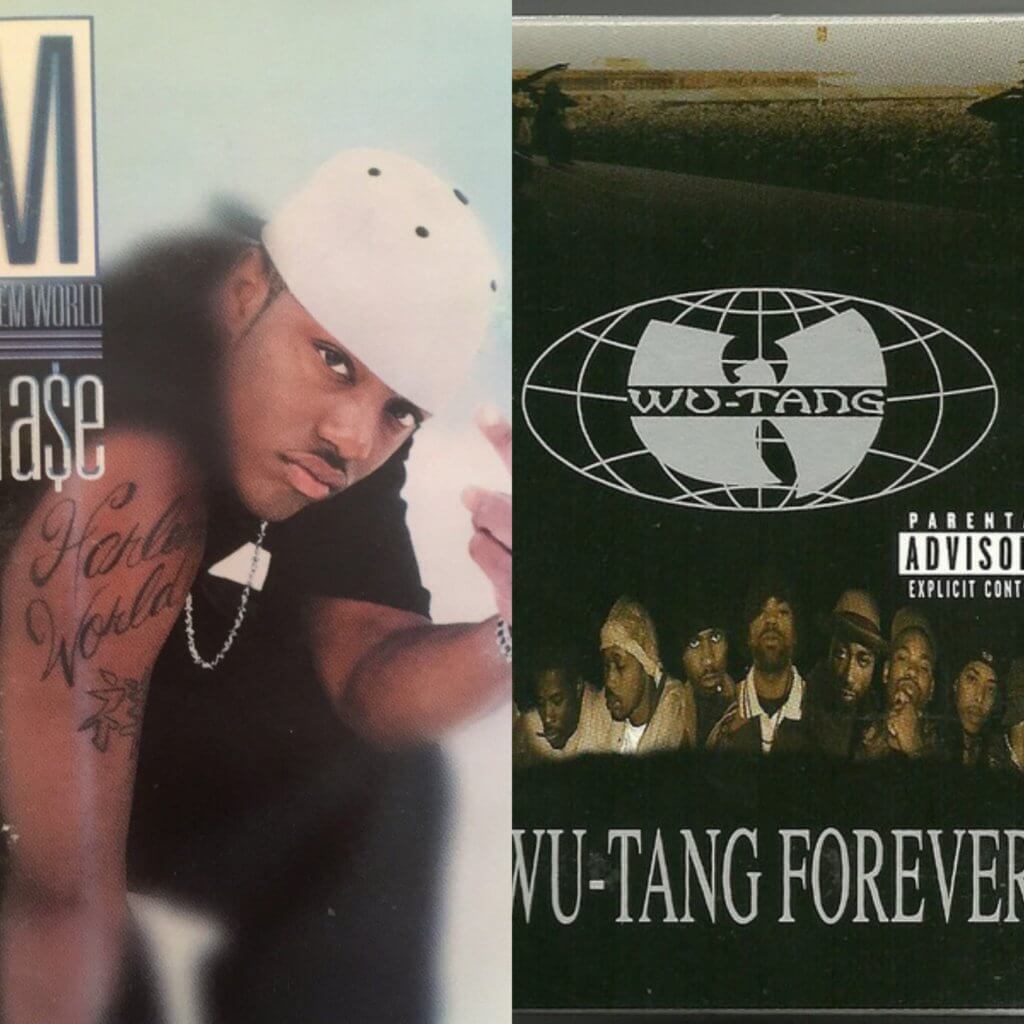 The Battle of the Posse Cuts brings it back to the East Coast via 1997 featuring two of the most popular teams in the game at that time: Bad Boy Records and the Wu-Tang Clan! While 24 Hours to Live is indeed the kind of track we have in mind when we discuss “posse cuts”, the styles and personalities within the Wu are so diverse any track with them is a posse cut.

Note that for this battle, we went in order, one-for-one matching MCs and then went with the closer. Which means the GZA, Masta Killa, and Ghostface will sit this one out.

These battles are subjective and follow three rules. The competing songs:

I won’t score these introductions but want to use them to highlight the profound differences between to the two teams. Amazingly, Bad Boy Records had some momentum following the assassination of the Notorious B.I.G. 24 Hours to Live is featured on Mase’ Harlem World album and is the antithesis of the shiny suit extravagance for which Bad Boy was becoming known.

We would be hard-pressed to find a more distinct opposite of shiny suits than the Wu-Tang in particular and ODB, specifically. The expensive budget that went into the Triumph video is more of a testimony to how popular the group had become and certainly not an attempt by them to be jiggy. Nevertheless, the contrast between Puff and ODB set the table for colossal match-up.

I think it’s pretty accurate to say that Ma$e was at his peak in 1997. But peak-Ma$e wouldn’t want it with Inspectah Deck even if it was Inspectah Deck’s worse day. At one time, Ma$e was Murder Mase and perhaps that was his position when he spit:

“I’d do good s*** like take kids from the ghetto

Show them what they could have if they never settle

Show ’em what Christmas like growin’ up in the ghetto”

Um, yeah, okay. But when you take bars like that and match them up against bars like this:

Can’t define how I be dropping these mockeries”

It seems so very, very unfair. Inspectah Deck’s opening is like a boxer’s first jab being a Mike Tyson haymaker to the jaw. The type of blow that would make a man search for a new religion.

This hurts because Jada is one of my favorites. Even my kids recognize Jada’s flow and can recite some of his rhymes. But with all the love I got for Jada, Jadakiss on this track is like that last year when Tracy McGrady was on the Toronto Raptors. You could see dude was going to be a monster while you could also see he hadn’t quite locked it down yet.

“Yo, yo if I had twenty four hours to kick the bucket, f**k it

I’d probably eat some fried chicken and drink a Nantucket

Then go get a jar from Branson

Part of what makes Jada remarkable is his flow and his voice. But if voices help anyone stand out, then the voice of the M-E-T-H-O-D Man is certainly a prime example.

I’m going to say this right now as a confessional – when I first heard the Wu’s first joint, Protect Ya’ Neck, I was confused. It was just too much going on. In my Kevin Hart voice, “I wasn’t ready.” So like the immature teenager I was, I misunderstood the opening shot from a group that would change Hip Hop in numerous ways. Yet, amid my overwhelmed confusion with Protect Ya’ Neck, I did recognize the uniqueness of Method Man’s voice. Fast forward to Triumph and I wasn’t confused any more:

Bless the globe with the pestilence, the hard-headed never learn

This my testament to those burned

Play my position in the game of life standing firm

On foreign land jump the gun out the frying pan

Into the fire, transform into the Ghost Rider

A six-pack and A Streetcar Named Desire“

The years following 1997 would show Jadakiss coming into his own. But right here, in this match-up?

In ’97, Black Rob’s Whoa had not been released yet, thus making this the first time I heard him on wax. While his lyrics fit the vibe of the song, there is an underlying anger that sounds foreboding.

Thought of momma, wrote her a note, we ain’t close

I hate her boyfriend so I put one in his throat

F*** around and sniff an ounce of raw, bust the four

While growing to appreciate the Wu, I was a little lost on Cappadonna. Then I heard Winter Warz and knew dude could bring it. On Triumph he goes:

Take cover kid, what? Run for your brother, kid

Run for your team and your six–can’t–rhyme groupies

So I can squeeze with the advantage and get wasted

My deadly notes reign supreme, your thought is basic compared to mine

Closest head-to-head so far. Cappadonna is on a legendary track with legendary MCs, but I can’t say these are his most legendary bars. Black Rob’s bars really feel like a warning from an MC on the wrong record label.

Sheek ain’t no slouch. I think initially, he did not stand out as much as Jadakiss but Sheek can spit. However, much like Jada on this track, he hadn’t come into his own as an MC but he does provide a little payback for those who crossed him:

Run all them papis’ spot, put one in his head at the door

The other eight had to be baking soda by itself“

If Sheek and U-God have anything in common, it is that they are overlooked within their respective groups. But the gap between U-God and his WU brethren is bigger than the gap between Sheek and the rest of the Lox. U-God is like Clyde Drexler on the Dream Team. Yes, he deserves to be there; yet, he is surrounded by generational talents. Nevertheless, he spits on Triumph:

The thrill of victory, the agony of defeat

Pocket full of shells out the sky Golden Arms“

It’s starting feel like a blowout. I mean without B.I.G., Bad Boy was missing a preeminent MC and listening to The Lox sounds like these dudes had not yet reached their potential (or maybe they were out of place and why their escape to Ruff Ryder was necessary). But the Wu were in their prime, like Jordan & the Bulls with six championships or classic albums under their belt. Speaking of which, since we’re all up in 1997 – let’s take the Chicago Bulls thing a step further. That year, they swept a promising Washington Bullets team in the first round of the playoffs (which could mean Jadakiss is Chris Webber and Styles P is Juwan Howard). Alright, I’m going too far – back to the rhymes. Styles P continues with the fatalistic killing sprees when he raps:

“If I had 24 hours to live, I’d probably die on the fifth

Run in the station squeezin’ the inf’

Styles on this s*** and I got spot vacant

Back to the 24 I make it out the precinct

Then we get the RZA. To borrow an analogy used by sportswriters – RZA is on the Mount Rushmore for Hip Hop Businessmen with Jay-Z, Master P, and J Prince. He would even be on the Mount Rushmore for Hip Hop Producers with Dr. Dre, DJ Premier, and J-Dilla – but okay, back to the rhymes. With all his talents, RZA sounds uncomfortable as an MC. Like his flow doesn’t flow. As irksome as his delivery was on this track, his lyrics provided a snapshot of his wisdom.

“March of the wooden soldiers, C-Cypher-Punks couldn’t hold us

A thousand men rushing in, not one n***a was sober

Perpendicular to the square we stay in gold like Flair

Escape from your dragon’s lair

Through your spine to the top of your cerebral cortex”

Yep, it’s the Bulls vs. Bullets all over again.

OH SH*T! This some John Cena vs. Shawn Michaels wrestling match-up level competition right here! 24 Hours to Live dropped months before DMX’s classic, Get At Me Dog – hold up, can’t acknowledge Get At Me Dog without a GRRRRRRRRRR, ARF ARF!! DMX’s verse here has a similar about-to-blow intensity:

So I’m gonna waste a lot of lives, but I’ll cherish every breath

I know exactly where I’m goin’, but I’mma send you there first

And with the s*** that I’ll be doin’, I’mma send you there worse

I’ve been livin’ with a curse, and now it’s all about to end

But before I go, say hello to my little friend

But I gots to make it right, reconcile with my mother

Try to explain to my son, tell my girl I love her

C-4 up under the coat, snatch up my dog

Turn like three buildings on Wall Street, into a fog

Out with a bang, you will remember my name

I wanted to live forever, but this wasn’t fame“

X was sending cats to Hell (and back). I can’t say these are his best bars, but they totally end the track with a bang. Speaking of ending with a bang, as noted earlier, we skipped over a few MCs to balance out this relay. Triumph went from the RZA to the GZA to Masta Killa to Ghostface and then Raekwon – yep, the hits just kept on coming. It’s fitting that the track ends with Ghost and Rae because the synergy they showed on Fish and Verbal Intercourse almost makes those cats an iconic duo within an iconic group – like Steph and Klay on the Golden State Warriors. Rae spits:

“Hey yo that’s amazing, gun in your mouth talk, verbal foul off

Just the dosage, delegate my Clan with explosives

While, my pen blow lines ferocious

Mediterranean, see ya, the number one traffic

Sit down the beat God, then delegate the God to see God

Only Raekwon as the linguistic dexterity to make all that flow. That verse in uniquely Rae; just as X’s verse is uniquely DMX. No winner here, it’s a tie.

One more basketball analogy before we wrap up – back in the day when the Magic, Bird, & Jordan Dream Team was prepping for the Olympics, they played the college all-stars. A number of those college all-stars went on to have impressive NBA careers. But during that match-up, they were no match for the Wu-Tang Clan, oops, I meant the Dream Team.