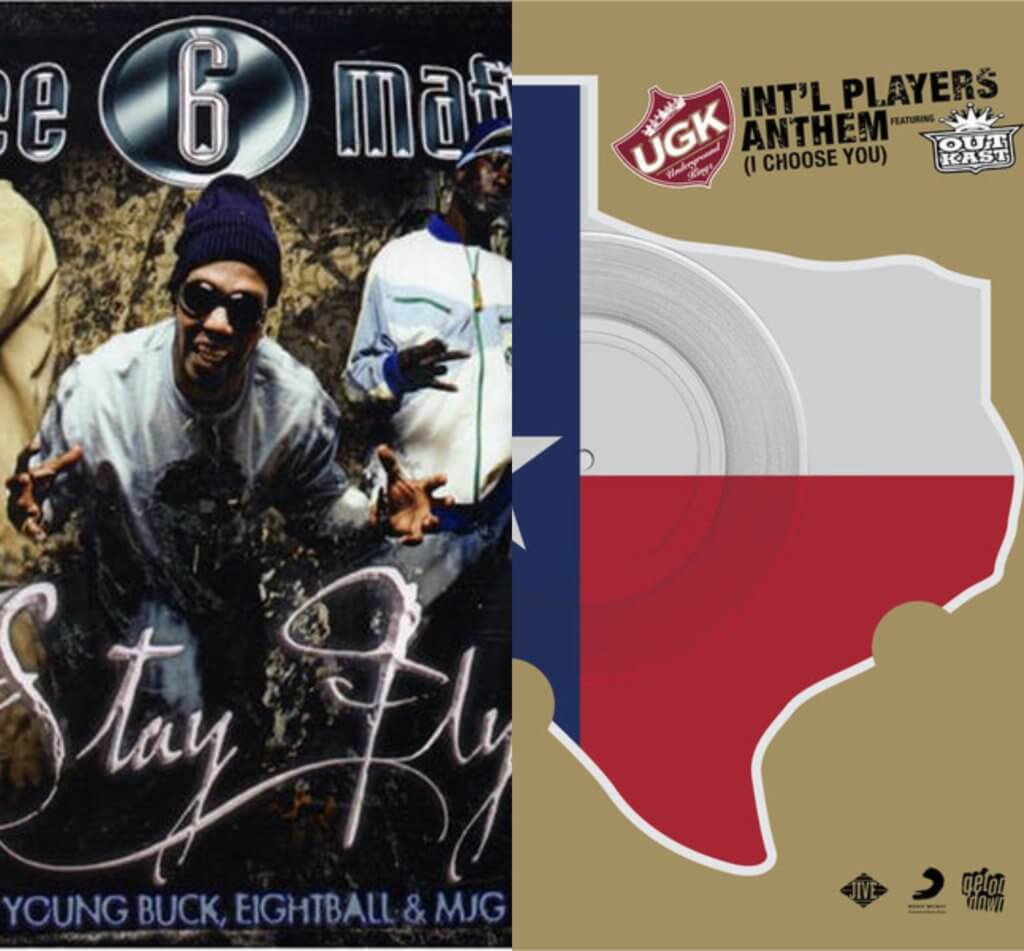 Here we go again with the Battle of the Posse Cuts! After last week, I said I was going to try to pick tracks of a comparable vibe. However, the opportunity to pit these legends against each other was more compelling than matching vibes.  Plus, while noting that both of these songs were released after Hip Hop’s Golden Age, I feel an exception is warranted since all the artist are influenced by and may have even been rhyming during the Golden Age. Moreover, to avoid what happened with our last battle when we pitted two songs against one, for this battle our match-ups will be:

As you may now know, these battles are subjective and follow three rules. The competing songs:

Keep in mind, that the battle is scored like a relay. The scoring is:

Ouch. I’m just going to put it out there – Andre 3000 is one of my all-time favorite MCs (a group that includes Big Daddy Kane, Rakim, Black Thought, and Phonte). On the other hand, Three Six Mafia gets love from me due to their hustle and reinvention. Juicy J and DJ Paul are a case study in entrepreneurship. However, that’s a study for another day; today, Juicy J gets us going with:

“They call me the Juice and you know I’mma stunt

Riding in the car with some bump in the trunk

Tone in my lap & you know it’s a pump

Breaking down the good green, rolling the blunt

Ice on the wrist with the ice in the chain

Riding through the hood, got me gripping the grain

And I’m sipping the same, while I’m changing the lane“

Consistent with the theme of the song, Juicy is fly. His flow is remarkable. He is in possession of that good stuff and in his fly-mobile, he is looking pretty cool. No surprises there.

“DJ Paul is a dog, one you do not trust

You leave your girl around me, if she bad she gonna get stuck“

Message: Do not leave your things unattended around DJ Paul if you plan on keeping them.

Not even adding those verses together can touch a legendary verse from Andre 3000 as he flips the damn thang all the way over. I mean, dude getting married during an anthem for players? While wearing a kilt? Then on a track with a soulfully classic beat, he spits damn-near a cappella? Not only does he pull it off, man, he knocks that s*** out of the park!

And I apologize if this message gets you down

Wetness all around me, true, but I’m no island

Peninsula maybe, it makes no sense, I know crazy“

The pairing of OutKast and UGK on the same track is heaven-sent and this verse from 3 Stacks steals the show.

At the time Stay Fly dropped, Young Buck was on the come up – representing Nashville and G-Unit. Nowadays, that G-Unit affiliation has a little backlash for him but back when this song was bumping he was informing us of his bond with Three Six:

“Three 6 Mafia, them my kinfolks

So when I’m in Memphis, Tenn-a-key

Let me smoke for free“

Crunchy Black follows Buck but doesn’t add anything magical to the song. True story: years before I penned old school Hip Hop flashbacks, I was a church administrator (not a preacher). Once, we were holding our weekly team meeting and the others noticed my downcast disposition. They inquired what was wrong and I responded, “Man, Pimp C died.” Yep, the rest of the team was speechless and you can see why I was not a preacher. Anyhow, every since he crooned us about the stones filling out his pockets, Pimp C has held a special place in my Hip Hop memories. With this verse, he lives up to his name:

“She be cross country, givin’ all that she got

A thousand a pop, I’m pullin’ Bentleys off the lot

I smashed up the gray one, bought me a red

Every time we hit the parkin’ lot we turn heads

You know the rules of the pimp game right? Well, if not, let’s just say your lady choosing Pimp C (particularly during a song sampling I Choose You) is not a good look for you. Lyrically, Pimp breaks no new ground here even with his s***-talking bravado.

YESSIR! 8Ball’s and Bun B’s impact on Southern Hip Hop cannot be overstated. While it is hard to push legacy aside, for this battle, we must. Even still, 8Ball’s legacy as a pimp is evident in his bars:

“Your girlfriend wanna ride with me

In a car with a pimp, where she supposed to be

You ain’t met no dude spit it cold as me“

If consistency mattered, then 8Ball would win because he been laying down the pimp game since Comin’ Out Hard. However, if we are going pimp bars vs. pimp bars then Bun B came out harder with:

“Baby, you been rollin’ solo, time to get down with the team

The grass is greener on that other side, if you know what I mean

I show you s*** you never seen, the Seven Wonders of the World

If we did a matchup of their respective catalogs, that head-to-head competition would be closer; but between these songs, we have to go with:

Much like his partner, 8Ball, MJG is known for spittin’ pimp game. He is also known for his unique flow and underrated word play. Typically, in a relay, the anchor is leg is one of the teams strongest runners. MJG would prove that here as well, particularly considering his reputation as the closer as heard on the underground classic, Lay It Down, or the Bun-B track with 8Ball, David Banner, and Rick Ross, You’re Everything, and the slept-on club banger, Sho’Nuff with Tela. On Stay Fly, MJG maintains his reputation as a closer with:

“MJ finna sprinkle in some of that

Super incredible, have a n***a running back

Where that n***a with the hood sticky number at

In the morning, when I need this and breath again a whole lot of weed but

I’m needing somebody to give me what I need

When I want nothing less then the best of the trees“

Typing those words doesn’t capture MJG’s flow which takes the lyrics to a more memorable level. Speaking of flow, I’m an OutKast fan but I wasn’t really feeling Big Boi’s flow on International Player’s Anthem. His emphasis on avoiding child support is advice to be heeded, but his wordplay is impeded by the flow:

“Eeny meeny decisions, with precision I pick or

Make my selection on who I choose to be wit’, girl

Don’t touch my protection, I know you want it to slip

But slippin’ is somethin’ I don’t do, tippin’ for life“

Having all those Tennessee legends on one track was genius and the beat? It’s BANGIN’!!! Like for real, play it in your headphones during your workout and see if you don’t get hype! Yet, UGK and OutKast on the same track? That’s extraordinary. Though this beat also bumps, particularly as they change it up for each MC, it complements the MC more so than drives the song. With that in mind, lyrically? International Player’s Anthem is the champ!

2 responses to “Battle Of The Posse Cuts: Stay Fly vs. International Player’s Anthem”