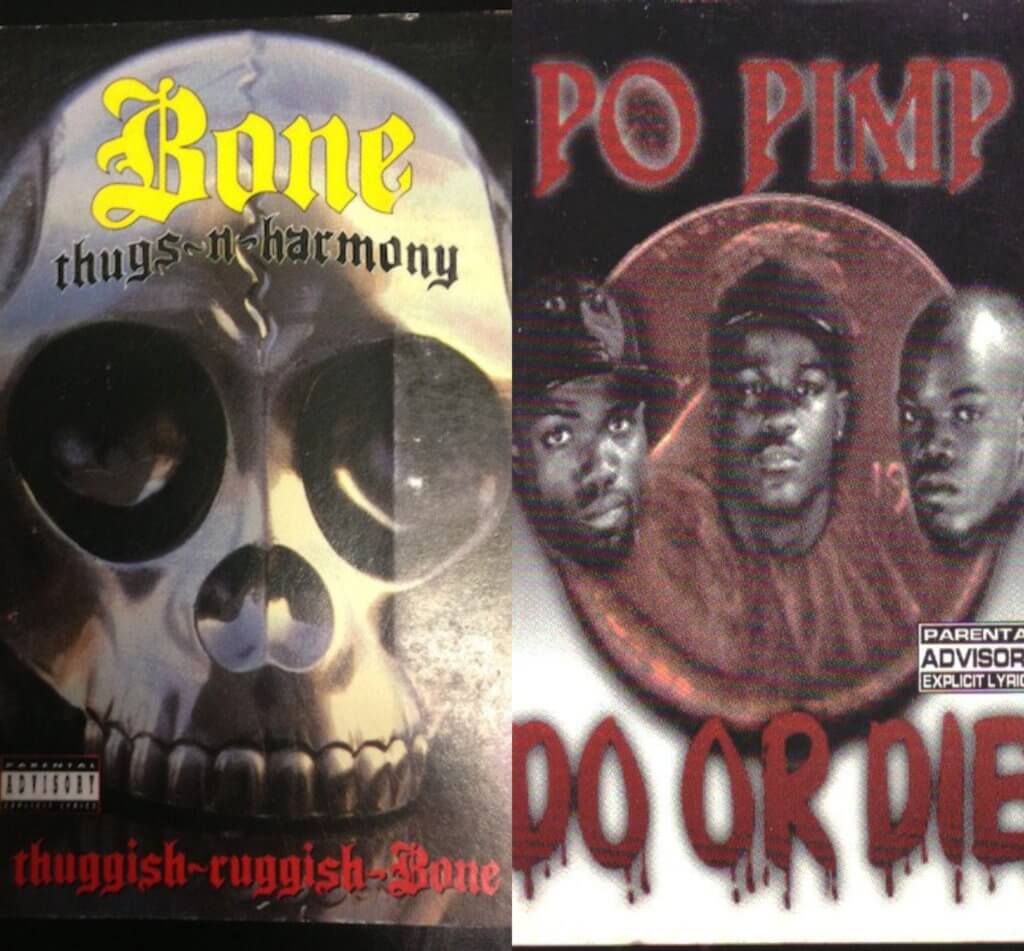 YESSIR! The Battle of the Posse Cuts stops by the Midwest! As a native of Detroit, my Midwest pride is strong. So strong that my hometown pride for local rap groups like AWOL and Detroit Most Wanted made me, for a time, a reluctant fan of some other voices in Hip Hop. My Detroit-ness slowed my appreciation for Das EFX or Blahzay Blahzay. However, interventions from my main man, Rashad, in the form of his incessant replaying of Redman expanded my listening palate. Po’ Pimp and Thuggish Ruggish Bone were my efforts to help Rashad appreciate the Midwest.

You may recall that these battles are subjective and follow three rules. The competing songs:

Notes: today’s relay/match-up will feature three MCs from each track. Wish Bone will sit this one out only because he had the shortest verse. Also, Do or Die and BONE are established groups; yet, the guest appearance of Twista and the diversity within BONE allow me to make this small concession. Trust me, you have to listen to a lot of BONE to be able to distinguish their uniqueness.

I’m guessing that there is a rap manual somewhere that says: “With your first track, you have to let the people know who you are.” Although BONE had an underground EP prior to the release of Thuggish Ruggish, Thuggish Ruggish is when they make their first national statement. Layzie’s intensity and fire lays down the gauntlet from the jump, Cleveland is here!

“You’re feelin’ the strength of the rump, step up

Hear the funk of the jump that the thugstas feel

Lovin’ your peoples cause we so real

Bring on that ammunition, trip and don’t slip

Not to mention, never knew no competition“

The written word doesn’t capture his angst, but trust me, BONE came out swinging.

Swinging isn’t what comes to mind when AK starts; smooth would be more fitting. It’s almost like this match-up features some hungry Cleveland underdogs going up against some laid-back Chicago players. Both groups use a rapid-fire and harmonizing rhyme style. However, if you’ve ever seen The Mack, then when I say Do or Die’s harmony evokes Goldie’s linguistic style, you understand.

“It was seven double-oh P.M

Fly low to them hoes in the B-M

Touching on my fo’ fif

AK personifies the unfazed, cooler-than-a-fan, pimp persona. It’s almost like this rap thing is no thing because he got this other thing, you know what I mean? But Layzie, he’s hungry and it shows. First relay leg goes to:

FLOW is the name of this battle and for me, Krayzie’s flow is the easiest to recognize in BONE as he tends to be the one with the most harmonizing within his flow (pun intended). So while his lyrics are cool, if you tried to deliver them as he did, you would be tongue-tied:

“Now follow me, now, roll, stroll off deep in the Land

We’ll creep if you can

Take another swig to the brain, rose

And running from the po-po …”

Of all my favorite Hip Hop tracks, I do the most mumbling when trying to rhyme with BONE (and I know I’m not the only one). Singing along as opposed to mumbling along is what sets Belo apart. All Po’ Pimp fans would rhyme along on cue when he said:

They peep those, P-I, M-P, and they think that automatically

Cause he’s a pimp, he gotta be full of that

With Krayzie there is a “you-can’t-rhyme-like-is” thing going. With Belo, the singalong is catchy and makes his verse a communal experience for fans. Neither is breaking new ground with content matter so that leaves us with this outcome for the second leg:

Nope, neither of them rhyme on the track. They both sing the intros, hooks, and outros. In many ways, their contributions helped make these songs big hits. I wasn’t the only signing:

“Do you want to rrrriiiiiiddddee in the backseat of a Caddy, chop it up with Do or Die?”

Slight nod to Shatasha for name-dropping the whole team, herself and letting us know Cleveland was definitely in the house.

The significance of flow has already been emphasized. Bizzy comes with a rat-a-tat-tat fire and Twista – formerly known as Tung Twista, who considering his standing in the Guinness Book of World Records, might be the originator or at least, a preeminent early pioneer of the rapid syllable flow. Bizzy came out, guns- blazing with:

“Gotta give it on up to the Glock-Gock

The Bone in me never no hoe, so

No creepin’ up outta the Ziplock…”

Point made. Yet, for all those who do the rapid-fire flow, what makes Twista the king of that thing is that he does not lose enunciation with speed. You may not be able to say what he said as fast as he said it, but you can clearly understand what he said and that my friend, is no small feat. In Po’ Pimp, he sticks to the subject matter and steals the spotlight from Do or Die (which is perhaps why he was the closer). Really, the lyrics are little too graphic to quote at length but we can just start with this:

And then collecting no dough from tips

“Spitting more game than a mouth full of poker chips?”

Yep, dude spitting crazy game. In addition to his flow, the wit and “oh-that’s-what-he-meant”, takes Twista’s verse up another notch.

A tie – can you believe that? Would Wish Bone’s verse be a difference maker? I don’t know. But I do know both of these tracks were major when they dropped. Oddly, as a fan, I’m actually more partial to Chopped & Screwed remixes of Do or Die tracks than the originals. Also, I think I speak for all of us when I say we could not have predicted how HUGE Tha Crossroads would be for BONE. It was such a big hit that it explains how, in hindsight, BONE became much more significantly well-known than Do or Die. But in terms of lyrical skills on their respective first national releases? BONE and Do or Die earn a tie.

One response to “Battle Of The Posse Cuts: Thuggish, Ruggish Bone vs. Po’ Pimp”