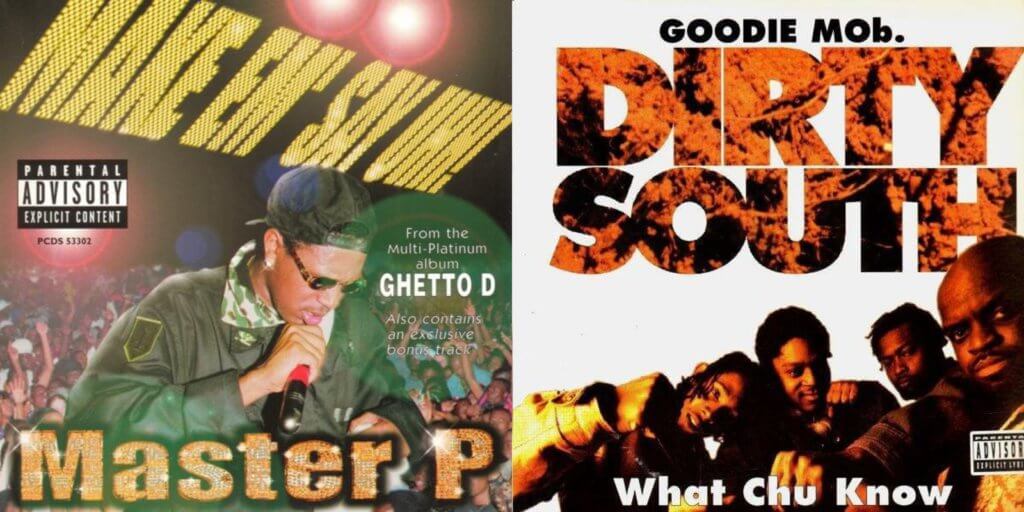 This week, Battle of the Posse Cuts heads back to the Dirty South and in doing so, it’s only right that we pay respect to Cool Breeze, the man who coined the term. I agree with those who believe he is the Dungeon Family’s underrated MC. Choosing between Dirty South or Watch for the Hook was a challenge; but I am sure that Dirty South not only represents Cool Breeze’s influence but also just how seriously the Dungeon Family had the game on lock.

But if the Dungeon Family was one of the first networks of Southern rappers to really achieve national significance, then No Limit Records certainly solidified the South’s permanent imprint on Hip Hop. If you thought they were just Pen & Pixel Graphics best customers, you … man, I don’t know what to tell you besides you missed something special.

These battles are subjective and follow three rules. The competing songs:

Each MC in the battle is scored with the following relay-race inspired point system:

Nope, P’s opening bars do not belong in the pantheon of Hip Hop’s best opening lyrics. But maannnn, the energy? Make ‘Em Say Unhhh!!! preceded the popularity of Lil’ Jon’s Crunk movement; yet, Beats By The Pound’s production could easily feel as crunk as the crunkest joint your ever heard. Master P leads the charge with:

Convicts and dealers and killers with TRU tats

Never gave a f**k bout no hoes on our riches

And fools run up wrong,

N***a I’m knockin out some teeth

If you were going to roll-up on P or anyone riding the No Limit tank, then the loss of your fronts was going to be the result. Speaking of rolling-up, Dirty South opens with the law rolling-up which sets a more somber tone than the hilarious introduction by Rappin’ 4-Tay on Make ‘Em Say Unhhh!!!. But yo, when that countdown starts – “1 to da 2 da 3 da 4” … get ready because it’s about to get hella real and who better to bring the real than Cool Breeze:

Now if dirty Bill Clinton fronted me some weight

Told me to keep two, bring him back eight

Do you think that Clampett will sick his goons on me?

Folks that argue about how much better Hip Hop used to be often bring up the notion that the music taught listeners something or made them think. While we know not all old school tracks made people think, with these bars Cool Breeze achieves that feat. He presents the hypocrisy and exploitation within the drug game. A perspective like that is way more insightful than braggadocio about spoils of hustlin’ or how to mindlessly kill people that look like you. Master P definitely jumps the thing off but Cool Breeze throws an unexpected hook.

If Cool Breeze is the unheralded member of the Dungeon Family then Fiend is the unheralded No Limit Soldier. As I’ve come to learn, being the laidback spirit among a collection of animated voices lends itself to being overlooked. Those in the know or that have an ear or eye for such things, know better than overlooking the low-key dude. Fiend’s flow and bars won’t allow him to be overlooked:

Fiend exercisin his right of exorcism,

Bustin’ out the Expedition

They heard we scary, No Limit mercenary

No tellin how bad it get, because the worst’ll vary

I heard you make em worry, that this for the loot

They intimidated by the rounds that the tank shoot

When taking a reflective view of the entire OutKast catalogue, it is obvious that Big Boi improved as an MC with each album. On this track, we still hear Southernplayalistic Big Boi, whose aspirational pimp bars do not match Fiend’s intricacy:

Right, well if pimpin’ be a sport I be bein’ the wide receiver

Any fool who discredited female MCs must have never heard “the unladylike diva, lyrical man eater” Mia X. She brings it, every time, just like when she spits:

We capitalize and monopolize on everything we see keep pistols drawed

And cocked, we got the industry locked, we can’t be stopped, too hot

Check the spots that we got, on Billboard

This Tank can set up roadblocks, we fadin all you hoes

Want some mo? Then let’s go, stretch you out like elastic

Zip that a** up in plastic, have ya folks pickin caskets

We drastic, our tactics is homegrown in the ghetto

Yessir! Mia X could bring the heat! But you know who else brings it? Cool Breeze. Big shout out to blogger Christina Lee – because from her piece, I learned that Dirty South is originally Cool Breeze’s song. Maybe that’s why he has two verses on the track. He doesn’t disappoint:

See never did I think when I got grown

That some pee wee sacks had been done took this town

Why you really got dropped in the Dirty South

See in the 3rd grade this is what you told

You was bought, you was sold

I betcha Jed Clampett want his money back

Talkin ’bout all this blow traffic got to stop

So the big time players off John Freeman Way

Had to find themselves another back street to take

We didn’t understand, “Naw n***a, that money ain’t yours”

Think about some of the Hip Hop tracks you find the most memorable. I bet a number of them include MCs who told a story. The best ones have stories that listeners can “see.” In Cool Breeze’s case, he provides an almost singalong flow with seemingly simple lines packed with layers of meaning and local slang. Here’s what separates him from Mia X in this contest: I just enjoyed Mia’s fire but as Dirty South ending beats fades, I have consistently found myself re-rapping Breeze’s bars. This one is close.

Talk about a contrast in styles – Mystikal’s animated Southern preacher inflections vs. Big Gipp’s effortless cool. But when we consider No Limit and factor the combination of a super hype song with an ultra energetic MC? Well, damn.

Used to live on Tchoupitoulas

I done paid my dues, but still played the blues

N***a play me like you was scared to lose

I’m still a fool, you ain’t heard the news

I’m with them No Limit n***a, makin’ major moves

We TRU soldiers, we don’t die

Whoa. Whew. I’m not sure if I heard Gipp ever spit like that; which he shouldn’t because he has his own style. Almost like a wise OG, Gipp’s seen-it-all-before persona is apparent when he goes:

Now that Cobras got the boys on Delowe on they back

Gipp hollered at Miss Ann, she said they didn’t get trapped

Behind the black, behind green, behind the red tint

Dealers breaking off that blow up for those woodchips

A lot of faces ain’t around, a lot of folks got shot

Been on the grind with Cool Breeze, droppin’ pounds with B

Eric Neal is the coolest from my century.

In this contest, that’s not enough to top Mystikal.

In hindsight, Make ‘Em Say was the bigger hit while the Dirty South is more of a classic. Both made huge impacts when they were released, but head to head? There’s no stopping the No Limit Tank.

Battle Of The Posse Cuts: Swagga Like Us vs. My Favorite Mutiny